Craig Uden, an owner of Darr Feedlot near Cozad, worries about the dropping price of cattle. 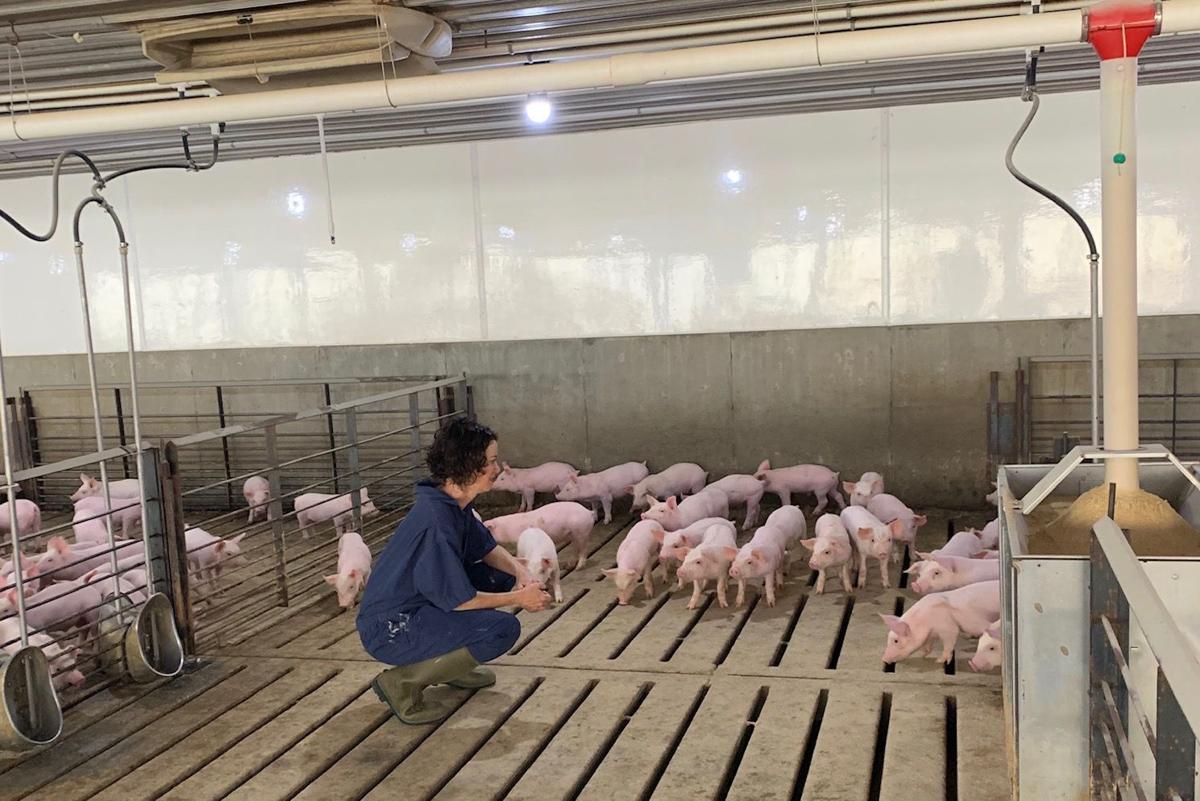 Shana Beattie, president-elect of the Nebraska Pork Producers Association, said the coronavirus pandemic has been a significant challenge for producers with market-ready pigs.

The COVID-19 pandemic closed schools and businesses across the country, but those in agriculture continue their work of raising livestock, milking cows and planting crops.

Still, the pandemic has many farmers and ranchers asking whether they can remain in business.

Many of Nebraska’s farmers and ranchers have not completely recovered from the flooding last spring. Now, coronavirus has had a hand in falling commodity prices and food-chain disruptions, which have led many to dump milk, give away eggs and euthanize animals because processing plants have been closed.

As the Beef State, the cattle industry fuels Nebraska’s economy and supplies 18% of the nation’s beef, according to Craig Uden, an owner of Darr Feedlot near Cozad. He worries about the price of cattle dropping 20% in the past 45 days.

“When prices are that bad, it creates a ripple effect in mainstream Nebraska,” Uden said.

It translates to higher prices at the grocery stores and possible food shortages, say some analysts, who predict a worldwide food shortage.

The United Nations reported that globally, 130 million people could be faced with starvation by the end of the year. Food shortages are already showing up in the form of empty grocery store shelves and limits on meat purchases in the U.S.

“Certain cuts of meat are not available because the workforce in packing plants is down and we are killing one-third as many animals right now,” Uden said.

Uden, a Dawson County rancher, said the biggest challenge right now is making sure they can get their market-ready cattle to the processing plants.

“We use Tyson Foods in Lexington very heavily and have a good relationship with them,” Uden said. “We need them to stay open.”

Not being able to harvest market-ready cattle backs up the feedlots, Uden explained. That, in turn, backs up the younger feeder cattle, which are still on pasture, and trickles down to the calves ranchers hope to sell this fall.

“Everyone will lose. The feeder loses; the stocker loses. It goes down the chain,” he said, adding that the industry will have to make adjustments and come up with new ideas.

Melody Benjamin, vice president of member services for the Nebraska Cattlemen, said if people are going to have food, then meat processing must continue. The Cattlemen has been working to find both short- and long-term solutions.

“Nebraska Cattlemen members continue to do what they do best: raise high-quality cattle to become the beef you love,” Benjamin said. “While there is a disruption in the supply chain as processors deal with worker illness and changing from food-service cuts to retail cuts, we will keep growing cattle.”

Dawson County farmers Paul and Shannon Peterson have been feeling the pain of the coronavirus.

“I am afraid the pandemic has already affected prices for almost all commodities,” Shannon Peterson said. “When your business is to feed the world and your income comes from what you raise, it is a major concern.”

Paul Peterson is a fourth-generation rancher on his family's 650-cow operation. They also have their own feedlot and a pig operation.

They also grow corn, soybeans, wheat and alfalfa and are concerned by the falling prices of their crops. The National Farm Bureau reports that the prices for all commodities have dropped.

According to the American Farm Bureau, crop and livestock prices started falling as schools, universities, restaurants, bars and cafeterias shut their doors and were no longer buying milk, meat, fruits, vegetables and other food.

“We will be paying for it in the long run. We have a quota now based on March production,” she said.

The pork industry in nearby states has been devastated by the pandemic as meat processing plants closed. Producers are left with nowhere to go with their hogs, and some have been forced to euthanize pigs to make room for the next groups.

As Trump urges reopening, thousands getting sick on the job

None of the pork processing plants in Nebraska have completely closed. However, many have dropped processing down to as low as 30%, said Shana Beattie, president-elect of the Nebraska Pork Producers Association.

“This has been a significant challenge for producers who have market-ready pigs ready for harvest," Beattie said. "The processing facilities are working tirelessly to keep plants open, while keeping their employees’ health an utmost importance.”

Beattie Family Farms in Sumner sells market-ready pigs when they reach their optimum weight of 280-300 pounds at 150 days.

“They gain rapidly at this age, and processing facilities are not set up to take animals that reach heavier weights,” Beattie said.

She said it’s been awful to see what pork producers have faced in other states, such as euthanizing pigs.

“As a farmer who cares for livestock everyday, it is devastating to have to make a choice to euthanize an animal that you have raised and fed for food,” she said. “We work hard every day to grow quality, safe pork that is consumed all over the world, and we are proud of the work we do and the products we produce.”

Craig Uden, an owner of Darr Feedlot near Cozad, worries about the dropping price of cattle.

Shana Beattie, president-elect of the Nebraska Pork Producers Association, said the coronavirus pandemic has been a significant challenge for producers with market-ready pigs.