The Beatrice Public Schools’ district teachers have approved a base salary increase of 2.5 to 2.8 percent, a $400 hike in base pay for the next school year.

Negotiations began last November, and the contract was approved ahead of a Feb. 15 deadline, otherwise there would have been a mediation process.

Superintendent Jason Alexander said the package leaves health insurance the same, and the agreement keeps the district in the 98% to 102% of the midpoint among similar districts. The new contract sets base teacher salary at $35,825.

“There were some very basic language changes to personal days off, but I think that’s all in what we can manage and what we can work with, and makes it flexible enough for the staff,” Alexander said.

The board also approved a technology agreement with Educational Service Unit 5 for the upcoming school year. ESU5 will give the district access to three technology coordinators in place of BPS Technology Director Dave Koch, who is retiring this spring.

Alexander said the agreement would redirect roughly $40,000 into the district’s technology fund.

Finally, the school board approved a lease agreement for district-owned farm ground the district near Beatrice High School.

Alexander said two bids were received, and Garrett Freese will lease the land from the district for just over $15,000.

Due to the upcoming trail project from the Big Blue Water Park to Hannibal Park crossing along the west boundary of the high school property, Alexander said the district will have to figure what percentage of that acreage is lost and then make adjustments afterward.

Beatrice Health and Rehab crown their annual king and queen of Valentine's Day Friday afternoon. This year's royalty is Lavonne Hosack and Gerald Smith, as voted by the rehab’s staff and residents.

As Beatrice Health and Rehabilitation royalty, Lavonne Hosack and Gerald Smith were given crowns, champagne and chocolates. Hosack was also given flowers, and she tearfully said they’re the first she’s ever received.

The residents spent their Valentine’s Day by listening to “Everybody Loves Somebody” by Dean Martin and “The Right Girl for Me” by Frank Sinatra, playing Bingo, eating chocolate and cupcakes brought by the staff and crowning their annual king and queen.

Lavonne Hosack was voted queen, and Gerald Smith was voted king, as decided by the rehab’s staff and residents.

Kailey Mustin, the activities director, said it was a record-breaking high for votes this year.

The two had a coronation with crowns, and were given champagne and chocolates. Hosack was also given flowers, and she tearfully said they’re the first she’s ever received.

“It surprised me big time,” Hosack said. “I love everyone here. I have ever since I’ve been here. This is my home.”

Mustin said the crowning has been a tradition at the rehab for several years, and that it’s one of their favorite things to do.

“We all want to be queen for a day or king for a day, and the fact that I can give it to them is just a blessing,” Mustin said.

“It’s just a certain sense of love,” said Spencer Morris, the rehab’s executive director. “That sounds super cheesy, given that we’re talking about Valentine’s Day, but it just provides those that we care for, that we consider family, the opportunity to draw even closer together. It’s a fun day.”

The Beatrice City Council has its third non-incumbent candidate for the upcoming election, as Timothy Fralin has filed for office in ward 1, the current spot of council member Phil Cook.

Cook has not filed for reelection as of Thursday.

Fralin was born and raised in Beatrice, and graduated from Beatrice High School in 1987. He was a member of the Marine Corps for 11 years before moving back to Beatrice and started working at Neapco Components in 1998, where he is now the warehouse logistics and distribution manager.

Over the years, Fralin has been involved with the Beatrice Bullets baseball, Beatrice Bombers football, Beatrice High School sports and athletics, Southeast Community College sports and Beatrice Wrestling Club teams. He is also on the Leadership Beatrice advisory board through the Chamber of Commerce, which he notes as a reason for him filing.

Fralin said he previously ran for city council in 2000, but backed out due to the birth of his child.

“Now that he's old enough and out of the house, and with my involvement through all of the other stuff I do in the city of Beatrice I thought this was the next step,” Fralin said.

Fralin said an improvement he’d focus on is cleaning up areas around town.

“A lot of visitors come to town to see Neapco and we take them around town, and there's some stuff that needs to be cleaned up that's kind of unsightly,” Fralin said. “It's small, but it's still pertinent to when we're trying to bring customers and potential employees to work at our factories here in Beatrice, not just Neapco.”

Fralin also suggested the council members and community leaders have more involvement with events around. He gave the Beatrice Police Department’s lunch with a cop program as an example.

“I just came back from my parent’s house in southern Missouri, and their local fire department had a pancake feed. Really get the community involved, especially with the new fire department coming up,” Fralin said. “It took a lot of people to vote for that, and this is something they could be doing as a revenue generator for themselves to build a little fund there to purchase some of the equipment.”

Overall, Fralin said there are several businesses and individuals currently improving the community.

“I think that Beatrice is in the process of being able to thrive. I think there’s a lot of good stuff going on in town, and it’s time to build on what our current leadership has,” Fralin said.

The other council members up for election or reelection are Ted Fairbanks in ward two, Rich Kerr in ward three and David “Pede” Catlin in ward four.

During the primary election on May 12, the top two vote getters in each ward advance to the Nov. 3 general election, where they’ll be voted on again. 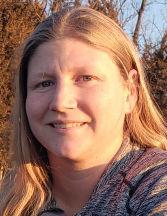 Emily Haxby, a Republican, filed for a seat to represent the county’s second district, which includes Clatonia, Grant, Holt, Blakely, Midland and the northern half of Lincoln townships, or the general northwestern part of Gage County.

Haxby farms in rural Clatonia, and is a part time veterinary assistant.

She has attended several County Board and also Planning and Zoning meetings to support proposed changes to wind energy regulations.

Specifically, Haxby believes Gage County should extend its setback requirements for wind turbines to one mile and also change how decibel levels are calculated, and who can do the volume testing.

Haxby started a petition to get the county to make the changes, and said she’s a Gage County native who wants to be elected to the County Board to address the concerns of her constituents.

Haxby and her husband, Justin, have two children, ages 3 and 4. The family operates a growing cattle operation and said improvements to county roads would be another top priority for her if elected.

“I’m just for the betterment of the area and community as a whole,” she said. “The roads could be in better condition and I want to see all the options. I grew up here and stay involved in the future of Gage County and this area. We put down roots here and plan to stay.”

Haxby is currently the only candidate for the district 2 seat. The position is currently held by Matt Bauman, who has stated he will not be seeking an additional term in 2020. The deadline for nonincumbents to file for the election is March 2.