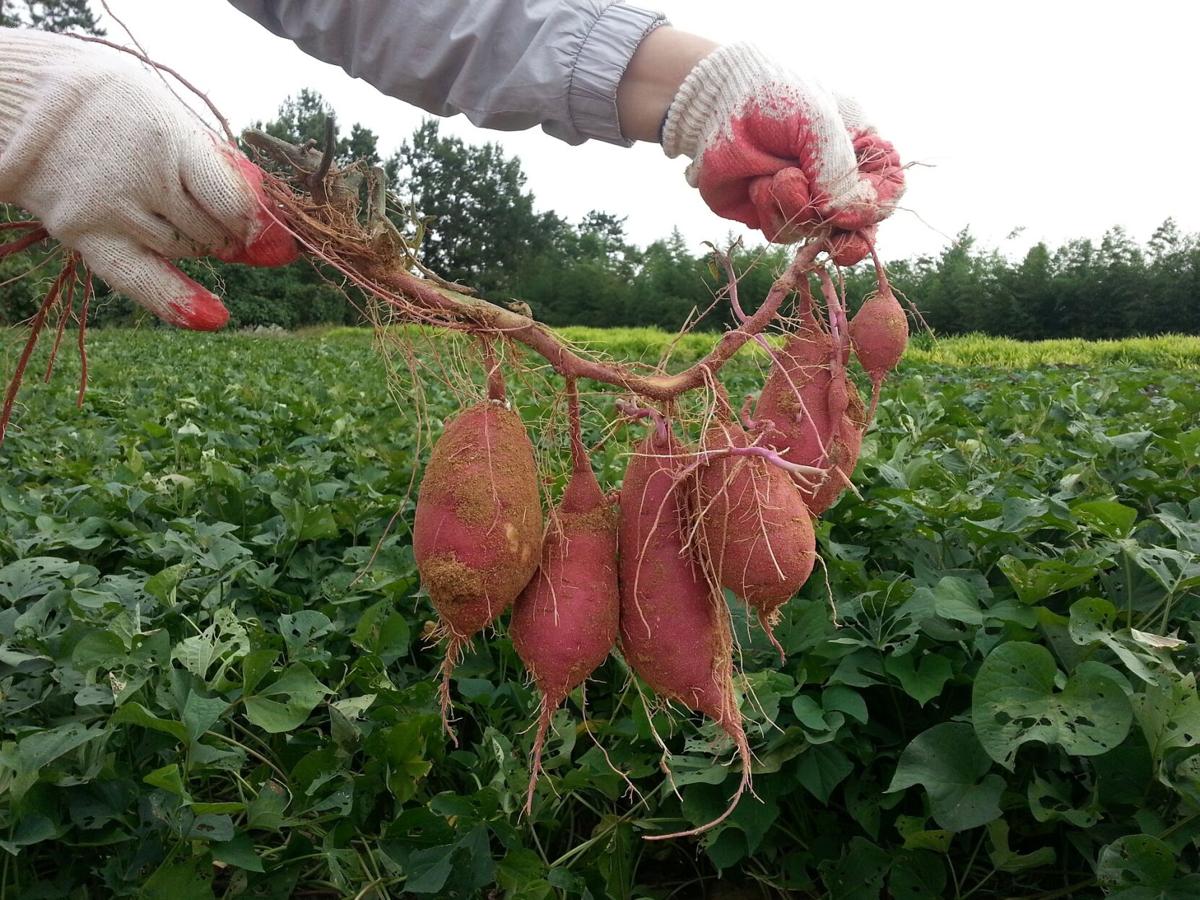 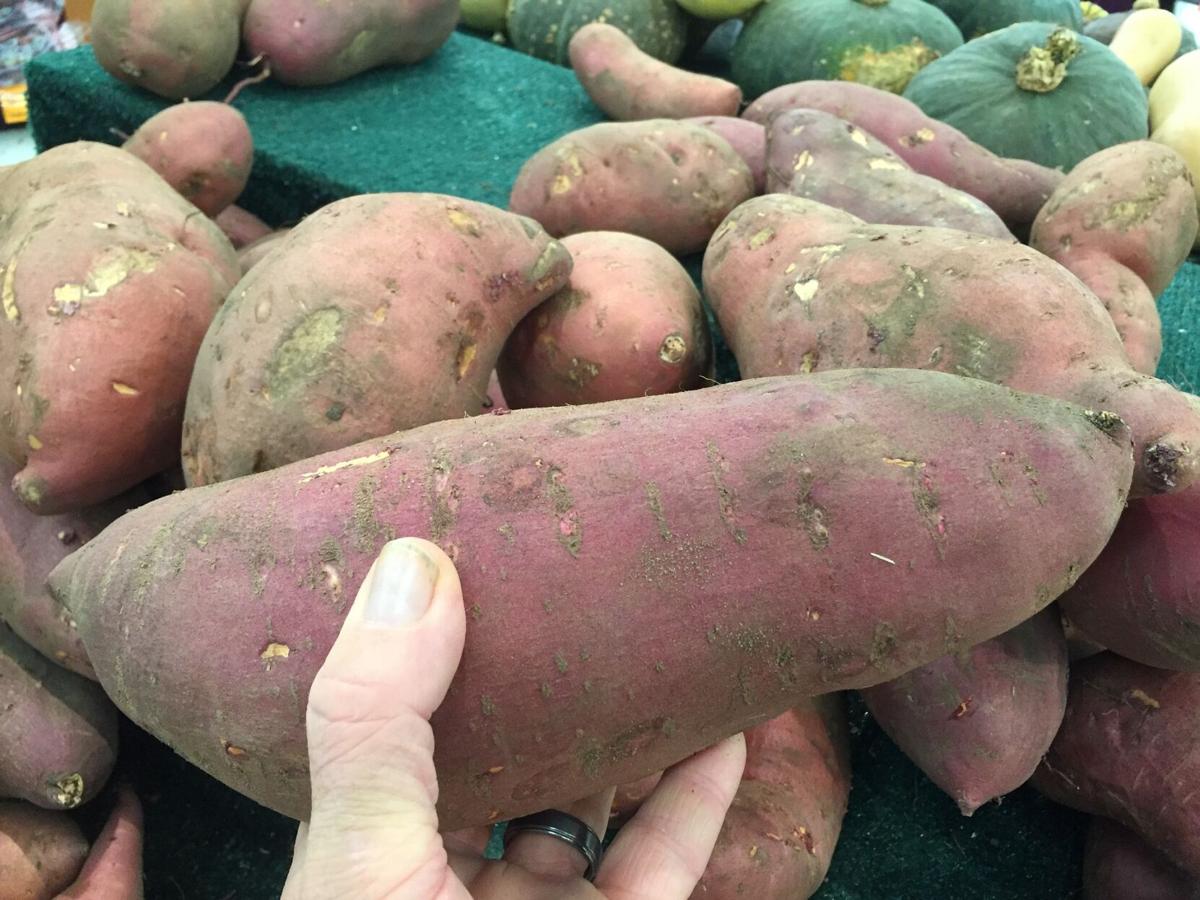 Though Americans often use the terms sweet potato and yam interchangeably, they are very different plants, and sweet potatoes are mroe commonly found on Thanksgiving dinner plates.

Sweet potato, botanically named Ipomoeas batatas, is a member of the morning glory family and native to Central and South America. In the United States, the terms yam and sweet potato are often used interchangeably but true yams are a completely different plant.

True yams are in the Dioscorea genus and native to West Africa and Asia. Their flesh ranges in color from white or yellow to purple or pink when mature; they have a rough scaly outer skin and are starchier and drier than sweet potatoes. True yams are relatively uncommon in the U.S.

The term “yam” began being used in the U.S. by the Louisiana sweet potato industry in 1937 as part of a national marketing campaign to differentiate their moist, orange-fleshed sweet potatoes from those grown on the east coast at that time, which had white flesh and a drier texture. White-fleshed cultivars of sweet potatoes are uncommon in the U.S. today. The term “yam” is an English version of the African term “nyami,” which refers to true yams.

If you’ve never tried growing sweet potatoes in your garden, it’s definitely worth a try. Since they are tropical plants, sweet potatoes like hot weather and do little in the garden until soil warms to 65 degrees or higher. They will be injured by any amount of cold weather, so monitor your soil temperature and wait to plant until the soil has warmed. Check your local soil temperature in spring at Nebraska Extension’s Hort Update web site, http://hortupdate.unl.edu, or measure it yourself at a 4-inch depth using a soil thermometer.

Sweet potatoes also need a long growing season, 100 to 110 days depending on the cultivar you choose. Some common cultivars are listed below. Plants sprawl out more than Irish potatoes, so if your garden is small look for bush types with more compact growing habits. Once established, sweet potatoes are tolerant of hot, dry weather and have few pest problems.

Sweet potatoes are grown from plants or slips. Purchase bunches of slips from your local nursery in spring or purchase them from a mail order nursery. Check with the companies below.

It's also easy to grow your own slips, Place a sweet potato root on its side in a container and place moist sand around it. About three quarters of the tuber should be buried in the sand.

Place the container in a warm location and give it about six weeks for the root to develop new growth shoots. Each tuber can easily produce four or five slips. Keep the sand moist during this time, but don’t allow it to become waterlogged.

Pull shoots from the root or cut them off about 1 inch above the soil line when they reach 6 to 8 inches tall. Cutting the shoots prevents rot diseases from entering the root while it continues to produce additional shoots.

Slips do not need roots before they are planted in the garden. They will quickly develop roots of their own once planted in warm, moist soil. After harvesting the slips, loosely tie them in bundles and place the cut ends in water until they can be planted.

A 10-foot row of healthy sweet potato plants, which would include 12 plants if planted on a 12-inch spacing, will produce approximately 6 to 15 pounds of tubers. This gives you some idea of how many plants or slips will be needed for your family.

Planting in ridges of loose soil 8 to 12 inches high allows the soil to warm faster in spring, improves drainage and gives the roots room to expand. Ridging also makes harvesting easier when digging. Space rows at least 3 feet apart, and plants 12 inches apart in the rows. If you only plant a few sweet potatoes, creating mounded hills of soil works well too. Vines may spread 6 to 8 feet wide.

Sweet potatoes grow best in moderately fertile soils. Avoid excessively rich or highly fertilized soil. Plants grown on light sandy soil will benefit from 1 to 2 sidedress applications of nitrogen during the growing season. Apply phosphorus and potassium only if a deficiency is indicated by a soil test.

Hoe as needed early in the season to control weed growth. Dense vine growth will suppress most weeds later in the season.

Plants are well adapted to hot, dry weather, but a good deep soaking in August during dry periods will improve your harvest.

Harvest as soon as the roots reach eating size and before frost. If vines do get frosted, dig them immediately. Decay in dead vines passes down to the roots and affects their storage potential.

If immediate digging isn’t possible when frost is predicted, cut away the vines and throw loose soil over the rows to protect roots from the cold. Soil or storage temperatures below 55 degrees can cause chilling injury.

Next year, you could be enjoying sweet potatoes from your own garden.

Sarah Browning is an extension educator with Nebraska Extension. To ask a question or reach her, call 402-441-7180 or write to her at sarah.browning@unl.edu or 444 Cherrycreek Road, Lincoln, NE 68528.

Make your house a home

For the holidays: Get inspiring home and gift ideas – sign up now!

Winter is a time many people prefer to stay indoors, enjoy a good book, a crackling fire in the fireplace and a hot cup of cocoa, giving little thought to the outdoors or their landscape.

Buying Guide: A Blackstone griddle is the perfect gift for a grill master

From fishing trips to backyard cookouts, this griddle is the perfect portable pick.

Buying Guide: This jigsaw puzzle board will help you organize all your winter games

Cold winter days are no match for this stay-at-home activity.

Buying Guide: This 35 in 1 survival tool is a great gift for an outdoorsman

Hikers, fishers, campers, and climbers will love this kit.

Color us trendy: Murder hornet amber, plus other hot shades for 2020

Buying Guide: These two player board games are perfect for small households

Staying at home doesn't have to be boring.

How to hire safely for home repairs this winter

With the onset of winter and the threat of COVID-19, here are six steps to protect yourself, your family and your workers when you need home repairs.

Up your Christmas tree game

Whether you’re a first-time buyer or you’ve always had one at the center of your festivities, here’s how to get the most from your holiday tree.

Widower has trouble getting name on title to home

Q: My husband died in 2013. After his death I learned that the title to our home we purchased when we got married was in his name only. The mortgage was in both our names.

For your friend who developed a love of baking this year.

Cities with the most roommates

Cities investing the most in high-density housing

Cities investing the most in high-density housing

Save on these household items you can make yourself

Save on these household items you can make yourself

15 cities with the biggest rent drops since covid

15 cities with the biggest rent drops since covid

Though Americans often use the terms sweet potato and yam interchangeably, they are very different plants, and sweet potatoes are mroe commonly found on Thanksgiving dinner plates.