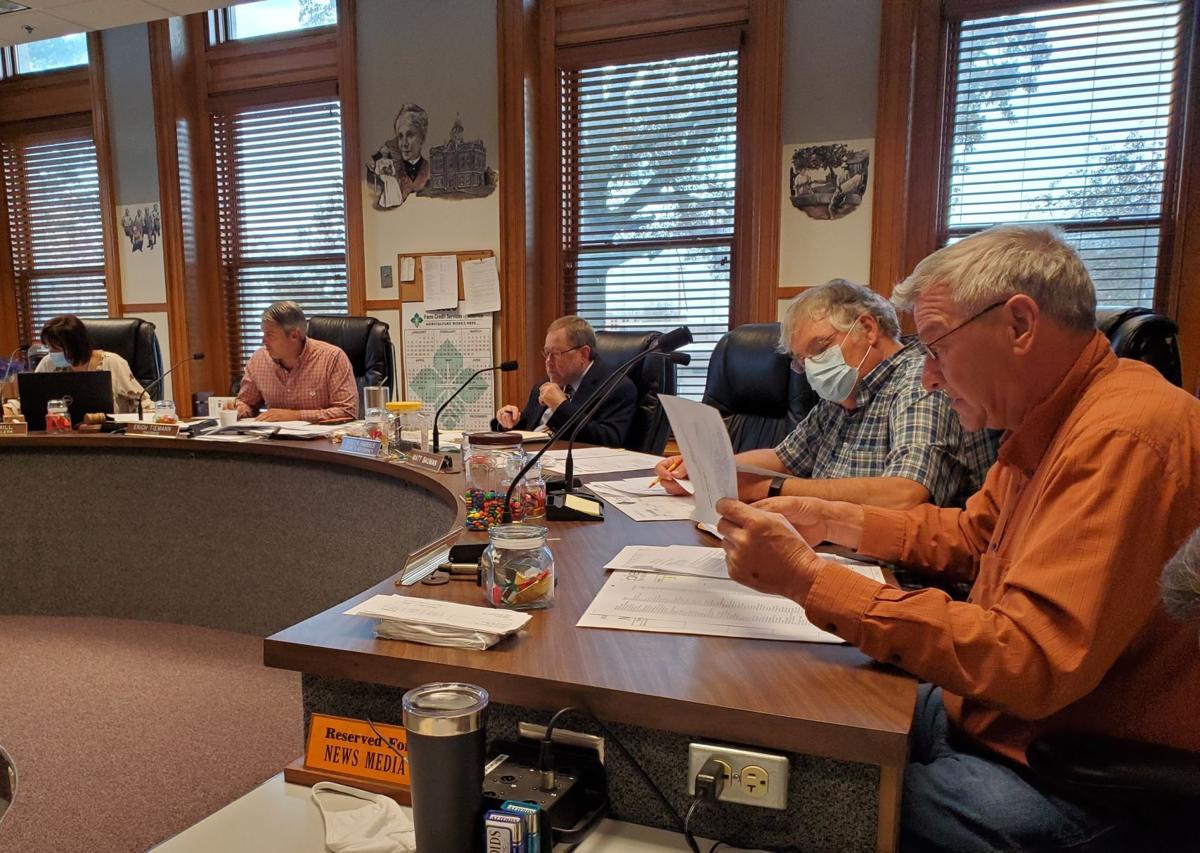 Members of the Gage County Board of Supervisors meet in the courthouse in November. The board continued holding in-person meetings during the pandemic. 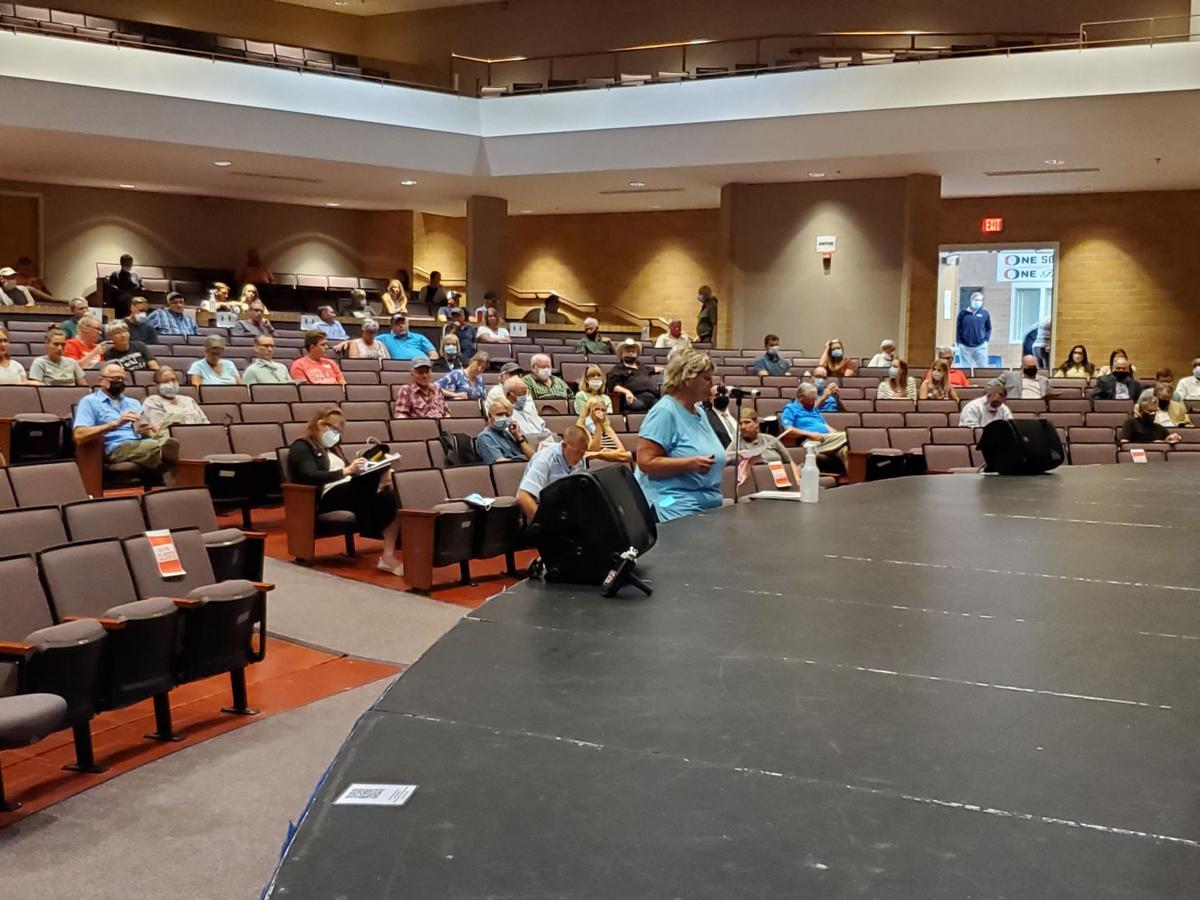 Gage County Planning and Zoning administrator Lisa Wiegand speaks during a public hearing of the Gage County Board of Supervisors in August. The meeting was held at the Hevelone Center at Beatrice High School to allow for social distancing. 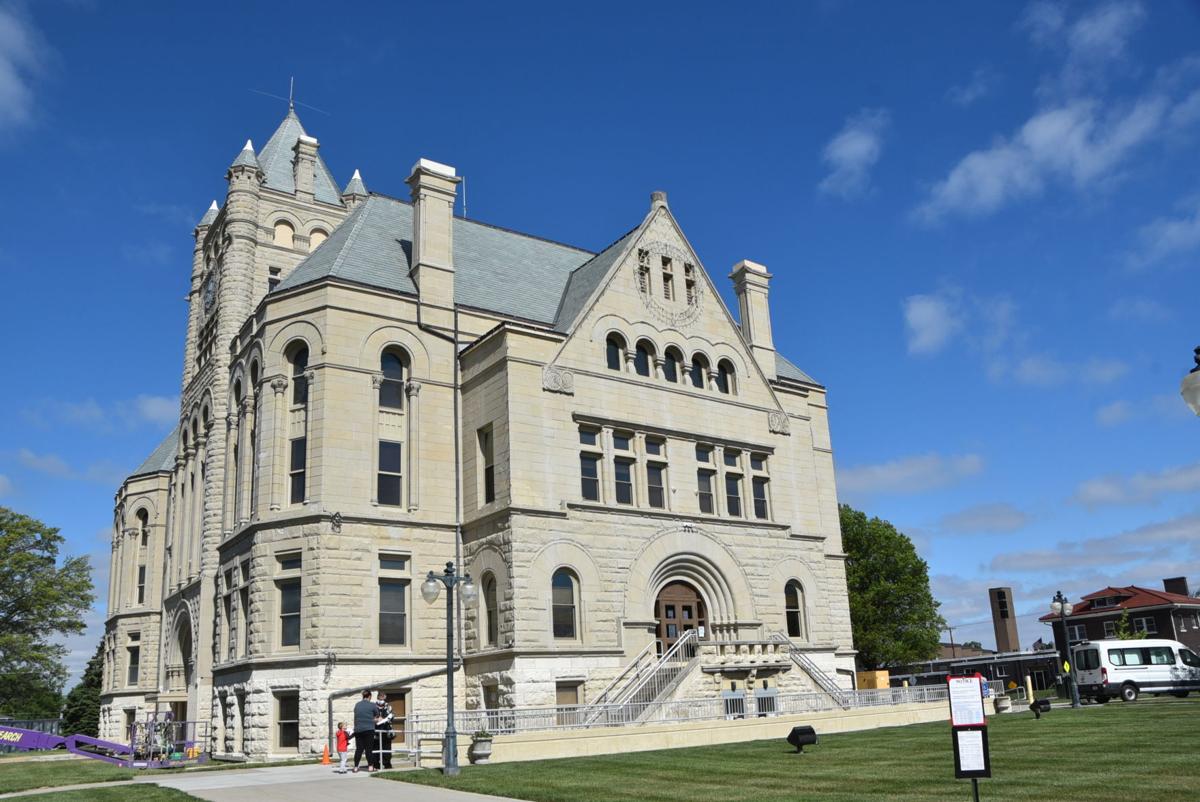 The pandemic brought many aspects of life to a halt, but local government has found ways to continue operating through a challenging time.

Erich Tiemann, chairman of the Gage County Board of Supervisors, said the board operated as close to normal as possible, though several county offices decided to take their own precautions.

“Of course in the beginning of all this there was a lot of fear, so we did close some offices for a while,” he said. “A lot of stuff is just rinse and repeat every year. Taxes are still getting paid and projects are still getting done, so I would say it’s been a normal year as far as output of work, it’s just different and occurring in a different fashion. People don’t like paying taxes, but we still need to get that done. It’s just done with more care.”

County Board meetings have continued to be held with no mask requirement.

The Gage County courthouse ultimately closed to the public on March 25. It reopened in late May.

In July, it was decided that permits for wind energy would not be accepted by Gage County.

Halting the permit process was driven in part by a proposal from a group of Gage County landowners to amend wind regulations. That proposal was presented last March and drew hundreds of people to planning meetings, raising concerns of how social distancing would be implemented.

The Planning and Zoning Commission held its first meeting since the pandemic on July 30 at the Hevelone Center at Beatrice High School. The larger venue was selected to allow for social distancing.

“We had so much interest with the wind farms, there was no way we could hold those meetings with hundreds of people involved,” Tiemann said. We never really had that many people at a meeting before anyway, let alone trying to find a way to social distance. We were grateful Beatrice Public Schools let us use the Hevelone Center. I don’t see anything like that coming again soon but as planning and zoning meets we’re still trying to space everything out.”

The Hevelone Center at Beatrice High School has come in handy for the county, though the school district has needed to find ways to make its own meeting work.

“One of the big changes was the ability to zoom meetings,” said Jackie Nielsen, assistant Beatrice superintendent. “We had quite a few months of virtual meetings and then when we came back to in person we made sure social distancing was practiced and we tried to keep board members as separate as possible.”

All Board of Education meetings are now being held in person, and masks are recommended but not required. Meetings remain open to the public, and Nielsen said there has been a decrease in the amount of people who attend.

“I think the district has made the appropriate steps at the appropriate time,” she said. “The saying is hindsight is always 20/20, and I think there may be things that you can reflect upon and say maybe they should have been done differently, but with the information we had it was the best way to proceed.”

The City of Beatrice followed a similar path with its meetings. City Administrator Tobias Tempelmeyer said the council started out by social distancing, then went to Zoom calls before returning to in-person meetings with social distancing resuming.

“The hard part for us is sometimes being able to get everyone together,” Tempelmeyer said. “If you have members who either have it or are quarantining, making sure everyone is informed with what’s going on has been a challenge.”

Another challenge has been broadcasting the meetings. The council chambers are outfitted with cameras and microphones, but with members spaced apart not everything can be picked up.

“Most of the time crowds aren’t huge so we have plenty of room,” Tempelmeyer said. “That’s not as good for people at home because the cameras aren’t set up and mics aren’t everywhere, but we’re still able to have our meeting.

“We did do a couple zoom meetings, maybe three or four, which I thought worked fairly well. It was just a little different getting used to not interrupting people. The nice thing was that made it open to the public. Not everyone wants to spend an evening in the boardroom. It was a nice avenue for the public to participate.”

Masks are also not required at City Council meetings, and Tempelmeyer said the social distancing efforts will continue for the foreseeable future.

At a not-so-little farm off Highway 77 in Blue Springs, thousands of trees are waiting to become the Christmas centerpiece at local homes and …

How Trump’s presidency impacted his businesses

Members of the Gage County Board of Supervisors meet in the courthouse in November. The board continued holding in-person meetings during the pandemic.

Gage County Planning and Zoning administrator Lisa Wiegand speaks during a public hearing of the Gage County Board of Supervisors in August. The meeting was held at the Hevelone Center at Beatrice High School to allow for social distancing.