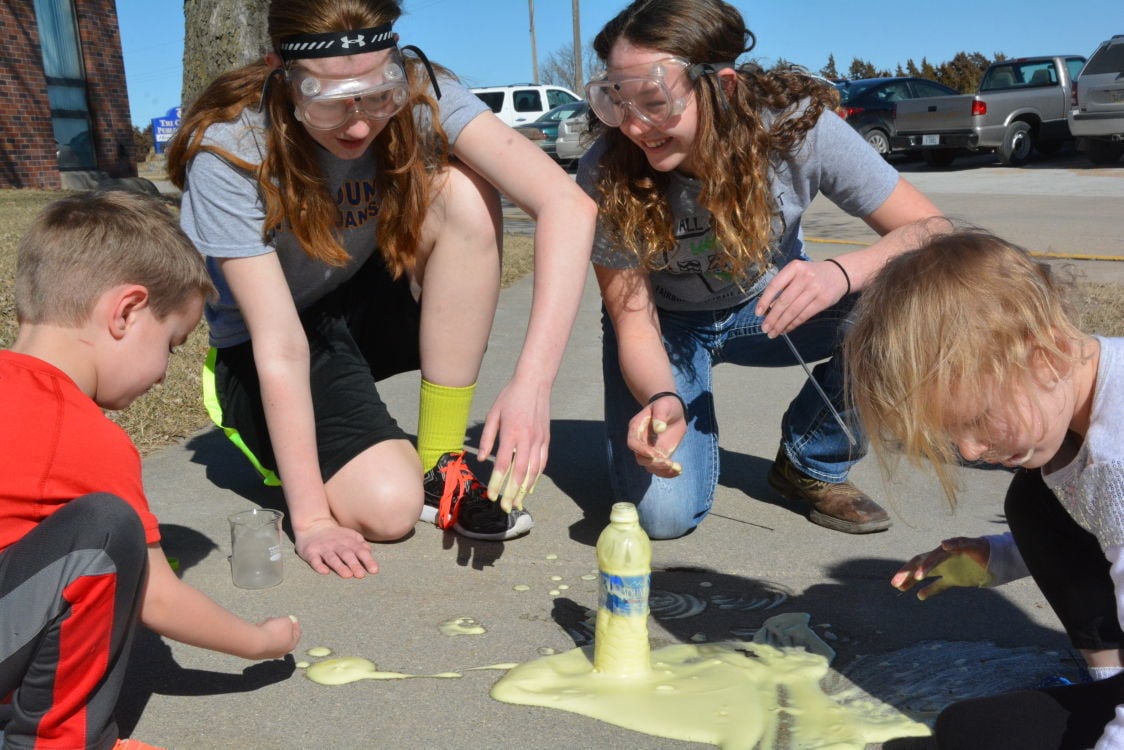 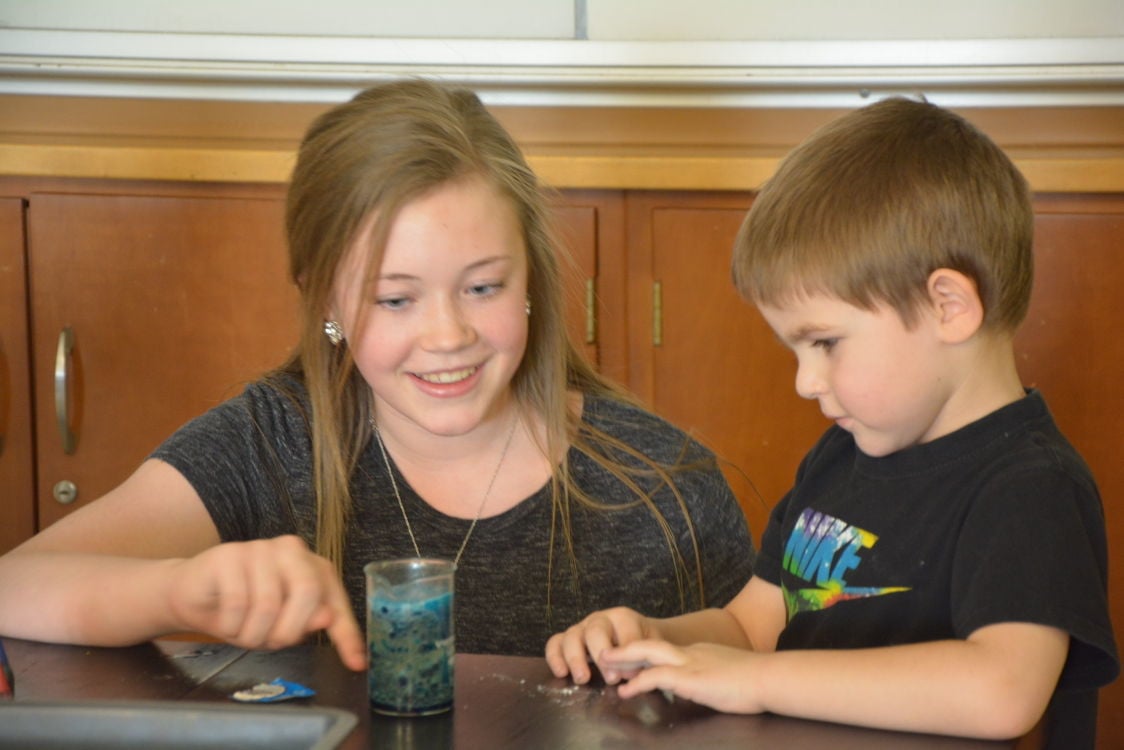 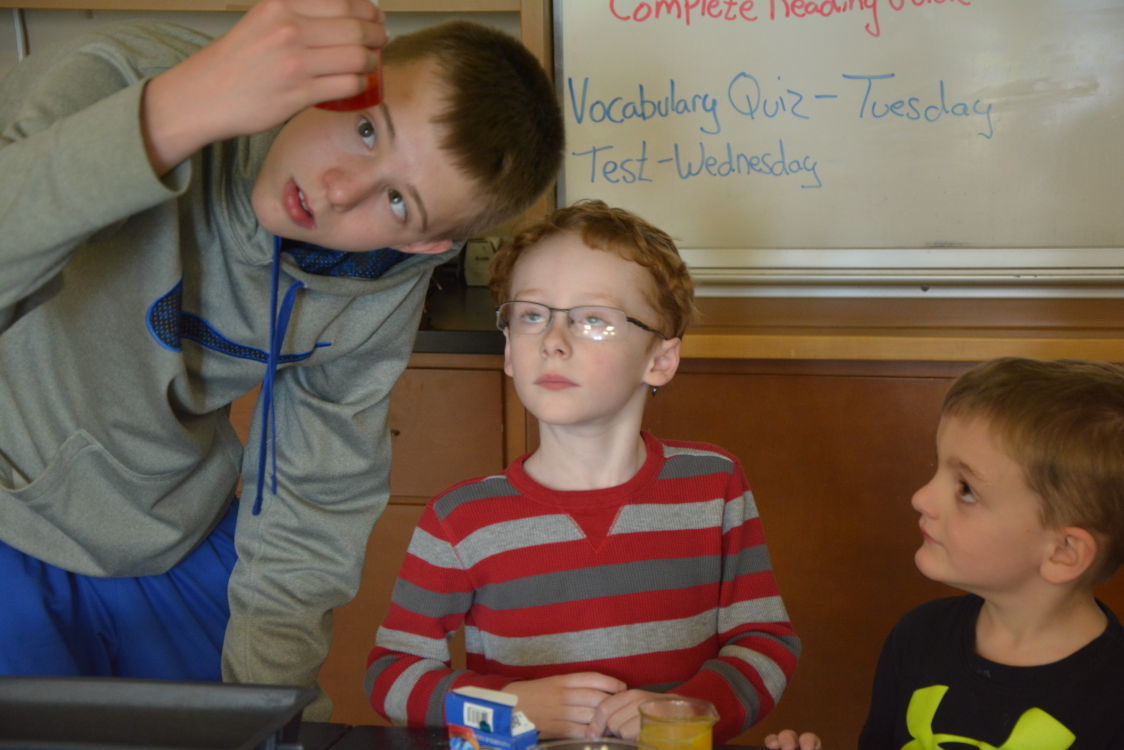 Tri County Public Schools eighth grade student Krayten Uher looks into a beaker with Tri County preschoolers as they conduct a science experiment to watch how water, vegetable oil, food coloring and pieces of Alka-Seltzer tablets react together. The preschoolers rotated through several experiments conducted by the eighth graders on Friday. 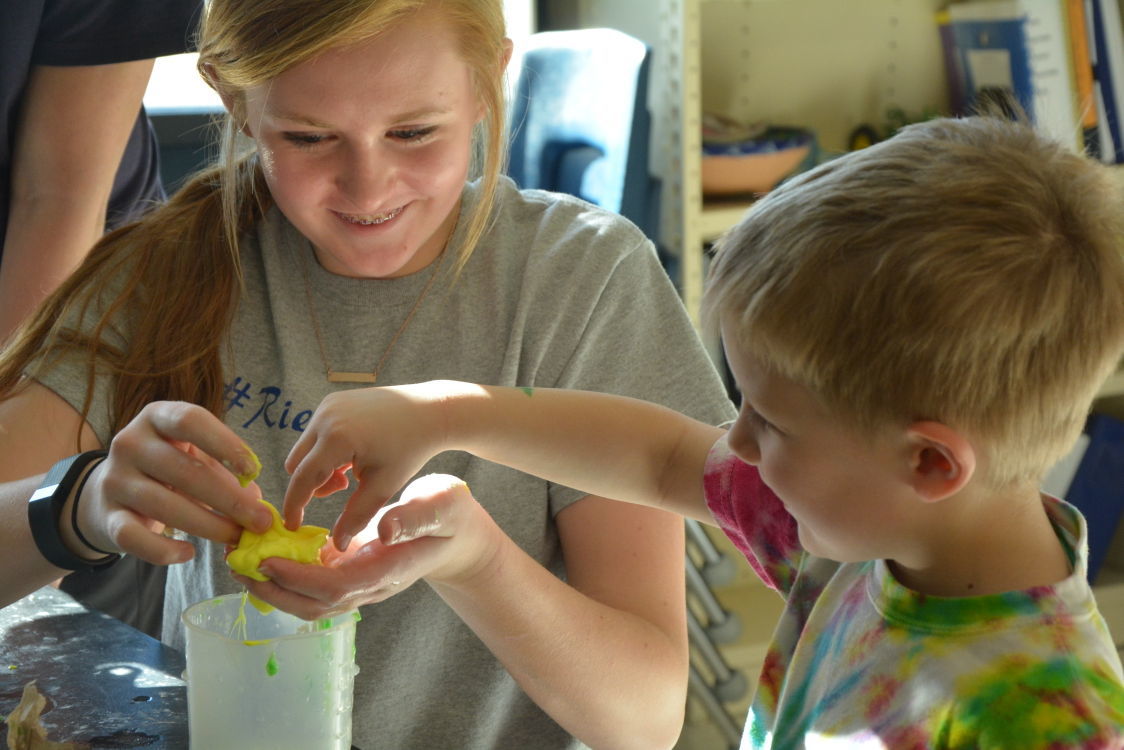 Tri County Public Schools students had fun making messes they could learn from on Friday.

Popcorn cooked on Bunsen burners and heat plates flew from the lab table to the floor. Outside, children watched as mixtures of warm water, hydrogen peroxide, soap and food coloring turned into a foaming mess after eighth graders added yeast.

At another station, they learned how water, vegetable oil, food coloring and pieces of Alka-Seltzer tablets react together.

Eighth graders Caitlyn Reynolds and Cassidy Kowalski said the lab time with the preschoolers was really fun, both for the adolescents and the young children.

“We also enjoy working with the kids and getting to spend time with them,” Kowalski said. “As they get older, they’ll understand it more.”

The preschoolers grasped some of the scientific concepts the eighth graders explained, they said.

“I think they understand how yeast makes it foam up and makes it rise,” Kowalski said.

“For as much as the elementary groups want to get involved with the secondary groups, we’re more than willing to get involved and give them a variety of things to work on and explore,” Kugel said.

“I think it’s really important for my students to use what they have acquired and to share it with others, especially with younger kids who might not have these opportunities otherwise,” Kugel said.

Kugel said Lohmeier gave him ideas she had in mind, and the eighth graders “took that and ran with it,” coming up with specific experiments.

“We planned and prepped for two days,” Kugel said. “The students did things they were strong in and could explain in simplest terms for preschoolers to understand.”

Kugel said, overall, he’s very pleased with how the collaboration between the 18 preschoolers and 17 eighth graders turned out. He said he plans to host another such science lab between grade levels in the future.

Lohmeier said the experiments are important for the young children because it teaches them lessons of cause and effect.

“That little boy saw the coke (Coca-Cola) explode in the other experiment (from Alka-Seltzer tablets), so he knew right away that the yeast would make this rise in this experiment,” Lohmeier said.

Lohmeier said she provides hands-on activities for her students when she can. Past in-class experiments include making fake snow and creating a “walking rainbow,” which shows how primary colors mix to make orange, green and purple.

A Beatrice man was taken to a hospital for medical treatment after a rollover crash Tuesday morning.

GRAND ISLAND, Neb. (AP) — Police in Grand Island have identified a man whose body was found lying in a front yard this week.

French President Macron: No blank checks will be given

Millions in US face eviction amid COVID-19 crisis

Millions in US face eviction amid COVID-19 crisis

Tri County Public Schools eighth grade student Krayten Uher looks into a beaker with Tri County preschoolers as they conduct a science experiment to watch how water, vegetable oil, food coloring and pieces of Alka-Seltzer tablets react together. The preschoolers rotated through several experiments conducted by the eighth graders on Friday.