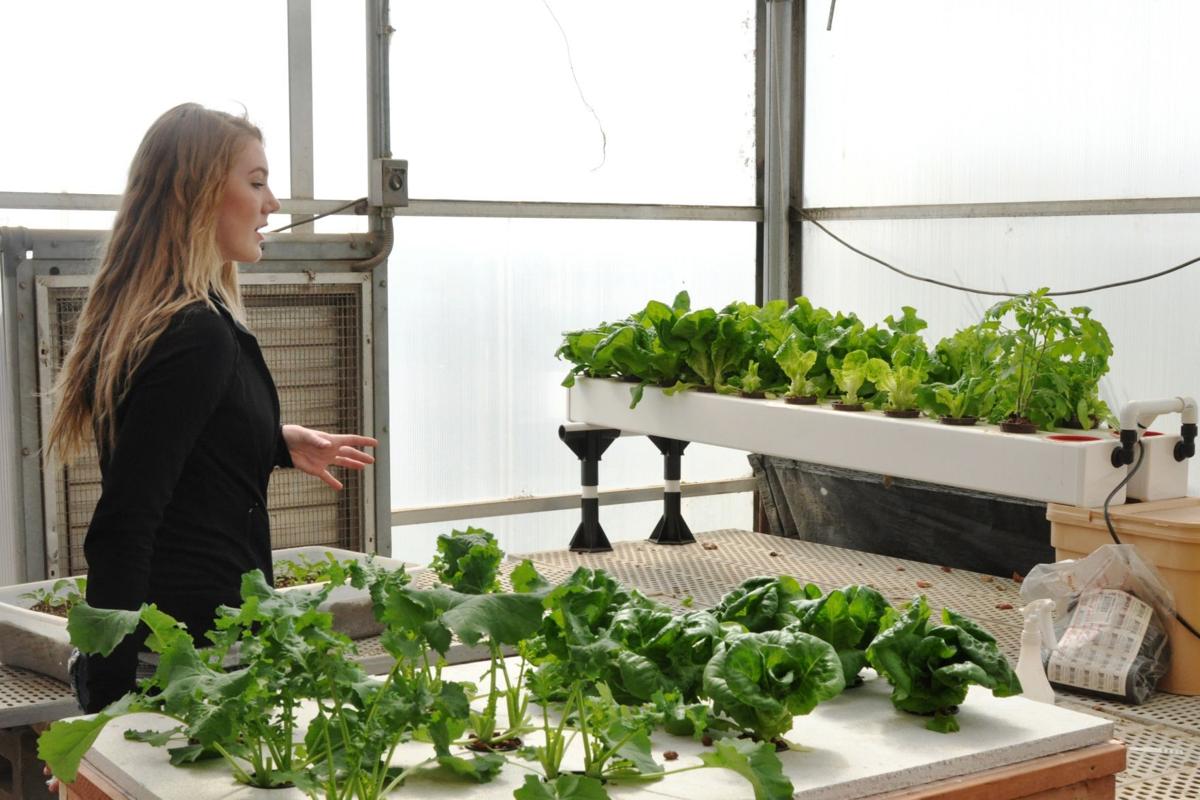 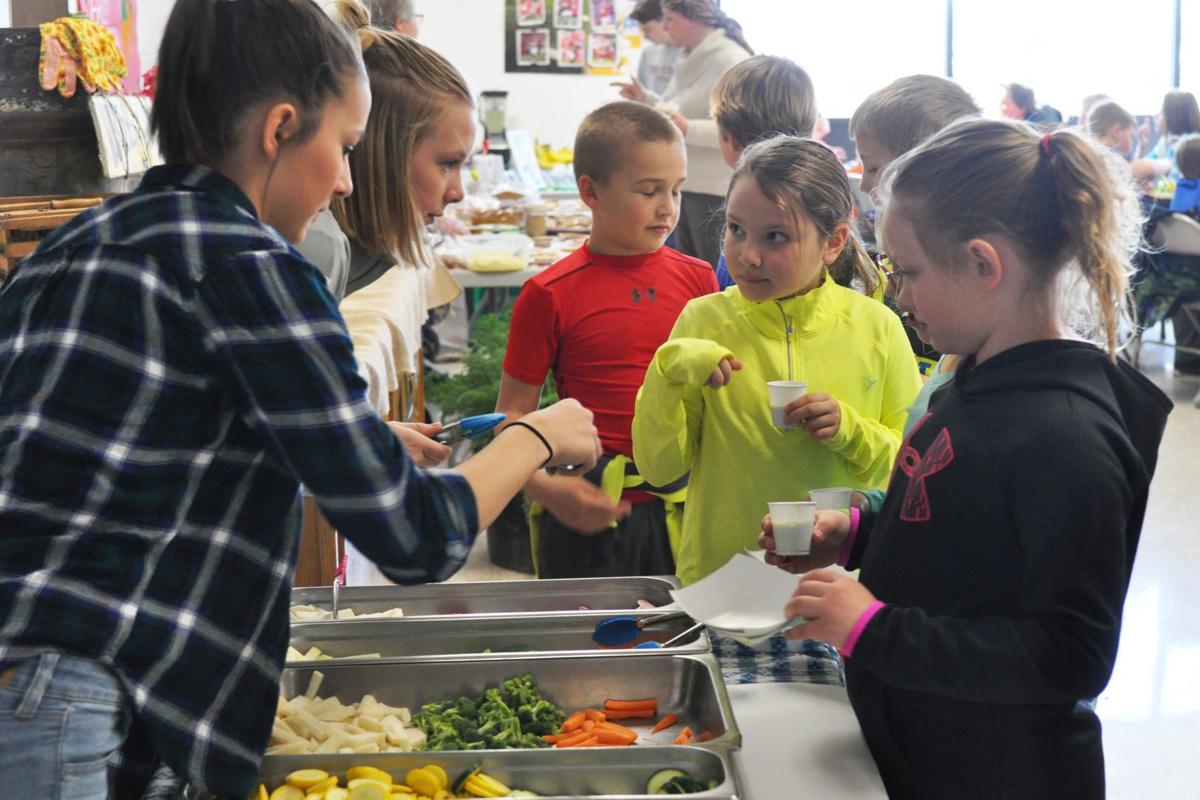 Students get a taste of jicama and kohlrabi at Tri County School's farmer's market Thursday. 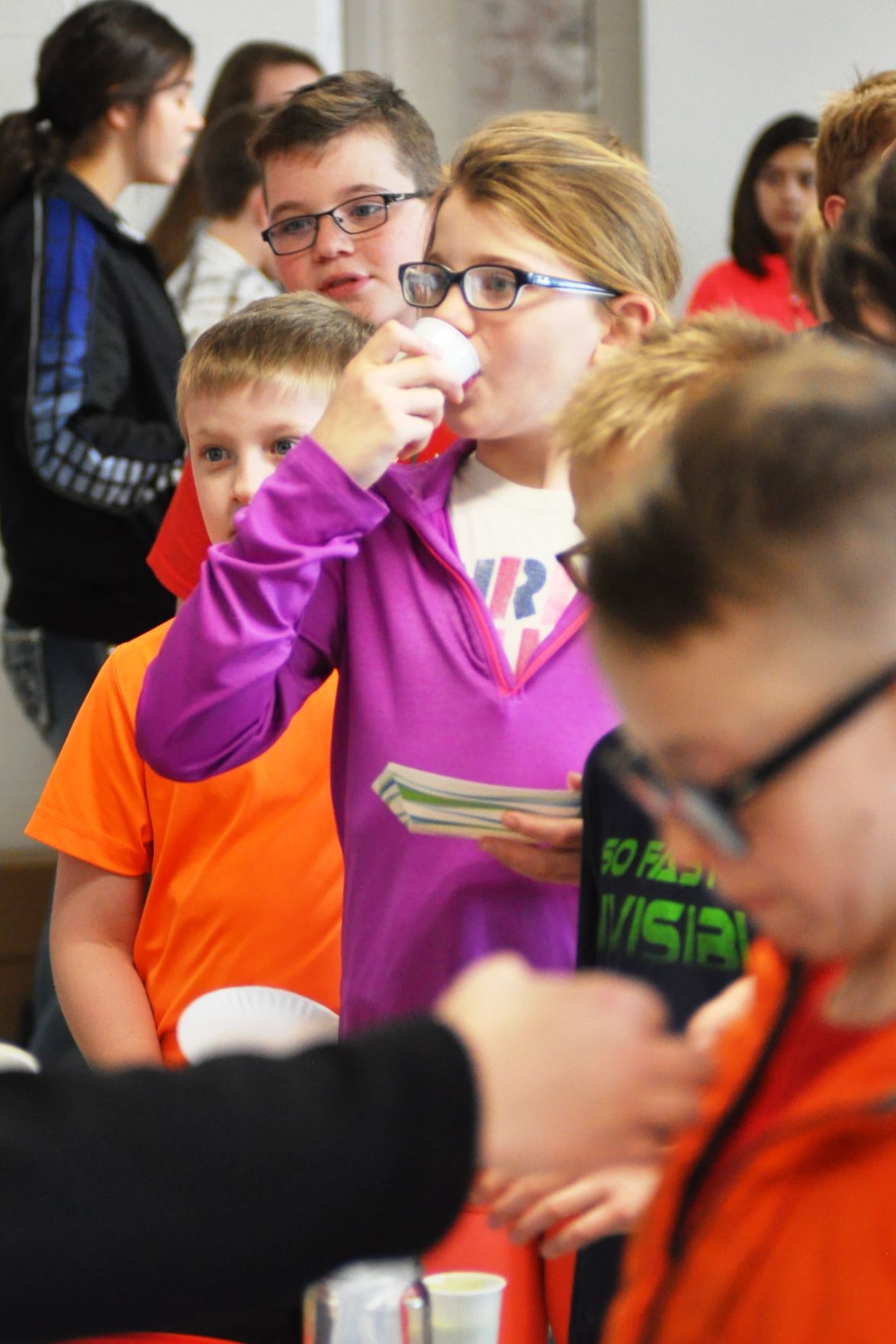 Spinach and pineapple smoothies were a big hit with students at the farmer's market event Thursday.

Thursday was an afternoon of adventurous eating for the students at Tri County Schools.

The school held its first farmer’s market, which included veggies picked from the school’s greenhouse and foods provided by local businesses.

There were some old favorites like ice cream and carrots on hand, but some of the veggies, like jicama—a root vegetable with an apple-ish consistency—and kohlrabi—a member of the cabbage family that tastes kind of like a sweet broccoli stem—were a bit of a novelty.

“Every class of students gets to go through our farmer's market today and try local produce,” said Jane Niemeier, the school nurse at Tri County, who worked to organize the event. “We have new vegetables out today, and we're all still learning how to spell them.”

The farmer’s market was the culmination of a grant received from Nebraska Team Nutrition. The school’s Wellness Committee used the money to help the school build a hydroponic growing system in the greenhouse.

Currently, the hydroponics are being used to grow heads of lettuce, completely free of dirt. Sophomore Tiffany Pearson, who is in the school’s horticulture class is impressed at its efficiency compared to conventional methods.

“Our hydroponic system is really incredible,” Pearson said. “I planted some lettuce in regular, loamy soil in November and we planted lettuce, same breed, same variety in the hydroponic system. And they grew like three or four times faster than the stuff in the soil.”

“I love plants,” she said. “So, it's so fun that we have the opportunity to have the greenhouse.”

Aside from the school-grown veggies, students got a chance to taste some foods from Prarieland Dairy, Classic Dairy and Frank’s Smokehouse in Wilbur.

In the cafeteria hummus, whole grain breads, beef sticks, ice cream, cheese sticks among other healthy snacks were laid out for hungry students at lunchtime.

One of the more popular items was the “Shamrocks and Gold” fruit smoothie prepared by the Nebraska extension that had apple juice, baby spinach, pineapple, yogurt and bananas in it. A group of fourth graders gave it a big thumbs-up as they slugged down a small cup of smoothie, even if the spinach did sound a bit weird at first.

“I am a picky eater,” said Junior Shae Wattjes, who was serving sausage and sauerkraut to students. “I hope that they learn to try new things, even if it looks kind of funny, it actually tastes pretty good.”

Students seemed eager to try just about anything in front of them, which was kind of the point of the whole event, Niemeier said, a willingness to try new and healthier foods.

“The whole concept is called farm to school,” she said. “We wanted to start bringing local production, local produce into the school system. it just makes sense. It's local, it's healthier, the closer kids get to their food, the better.”

Two people were arrested this week after a search warrant was served in Beatrice in connection to a Kansas burglary.

Officials with Beatrice Public Schools are planning for future projects, including an update to the track at Beatrice High School.

Students get a taste of jicama and kohlrabi at Tri County School's farmer's market Thursday.

Spinach and pineapple smoothies were a big hit with students at the farmer's market event Thursday.