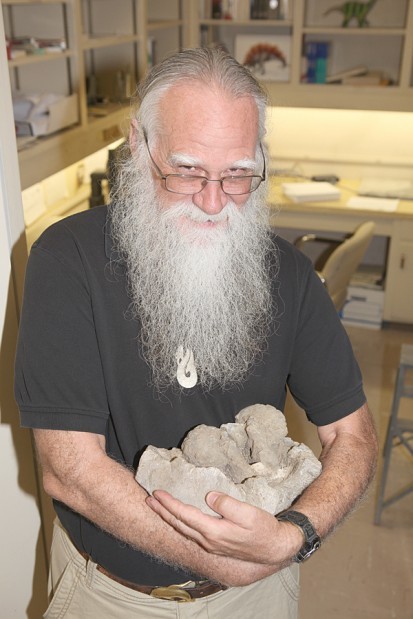 Howell Thomas, senior paleontological preparator at the Natural History Museum of Los Angeles County, California, poses with a rare fossil of a whale brain. The fossil was discovered by a Burchard woman nearly a decade ago. 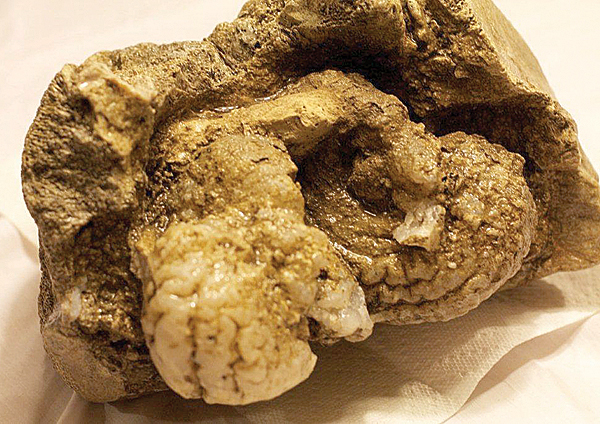 A rare fossil of a whale’s brain — at 25 pounds and 16 by 13 inches — was discovered by Pepper Oshaughnessy, of Burchard. The fossil has been in her possession for nearly a decade. It wasn’t until five months ago that it was declared a rare fossil.

A rural Burchard woman uncovered a rare fossil nine years ago and the piece has been propping her door open ever since.

She recently learned that old doorstop is a rare fossil believed to be worth tens of millions of dollars.

Pepper Oshaughnessy found the fossil — that was believed to be common fossilized brain corral — on her family’s ranch in San Luis Obispo County, Calif.

An avid “digger” thanks to her mother’s anthropology career, Oshaughnessy kept the fossil,  and for nearly a decade it adorned her mantle and was used as a door stop until fall of 2011 when she said she took the fossil to University of Nebraska-Lincoln paleontology professor Robert Hunt, who recommended a specialist take a look.

With peaked curiosity, Oshaughnessy boarded a plane to her native California where she received the surprise of her life.

“When I went to California with this brain I was just carrying it in a sack and when they picked it up, they said, ‘lady, do you know what you have here?’ and I told them I’d been using it as a door stop for nine years,” Oshaughnessy said. “The jaws dropped at that point. Brain coral is worth about $20 so I thought I would keep it as a conversation piece and when they told me what it was I about fell over.”

What Oshaughnessy had found, according to Howell W. Thomas, senior paleontological preparator for the Natural History Museum of Los Angeles County, was an extremely rare fossilized whale brain, the second to ever be discovered, and the only one ever found in one piece.

“It’s an amazing specimen because brains don’t fossilize because of their soft tissue,” Thomas explained. “The first thing I said when I heard about this finding was that there’s just no way. They brought it in, and sure enough, it’s the second of two fossil whale brains.”

According to Thomas’ report, the two fossil whale brains estimated at 11-15 million years old,  are the only fossilized brains found of any animal, from any time period anywhere in the world that can provide detailed information on the actual brain anatomy of an animal that lived millions of years ago.

It’s believed the fossil is the brain from a baleen whale that lived in what is now the Central Coast region of California. The other fossilized whale brain was found in Paso Robles, in the same formation, from a sperm whale.

The discovery is significant because it will give scientist’s the opportunity to look at brains of animals of the same family, millions of years apart, and do evolutionary comparisons.

“We will look for evolutionary trends to see if we can figure out what the brain can tell us about an animal around 12 million years old,” Thomas said. “We have modern whale brains to look at for comparison, so we can compare the development in basically an anatomical study.”

In addition to comparison to modern whales, Thomas said the fossil is a preservation of a great mystery, in why the brain didn’t experience normal decomposition.

“Soft tissue doesn’t fossilize, and so the brain is the first thing that deteriorates,” Thomas said. “To create a situation where this could get fossilized is unheard of. We’re still working on finding out how it happened, but there’s a couple of possibilities to consider. One is if water got into the brain quickly to cool it, it possibly caused a bacterial mat to form over the surface and preserve the shape. It’s a really incredible occurrence.”

Oshaughnessy has lived near Burchard for around four years. Now an accomplished artist, she grew up digging with her twin sister under her mother’s guidance.

The highlight of her digging career was found on her family’s ranch in a wash after a major storm on the central coast of California.

Oshaughnessy is unsure what the fate of the fossil — which is around 25 pounds and 16 by 13 inches — will be, but has a clear plan of what she’ll do with the funds raised from the specimen.

Though hesitant to put monetary value on an artifact potentially priceless to the scientific world, Oshaughnessy estimated an approximate value fetching eight digits (tens of millions of dollars), which will be used to open a Brucker Biofeedback Center on the west coast.

“She was in a horrible car accident 13 years ago that resulted in a massive brain injury,” Oshaughnessy said. “When we took her there, she was taped to the wheelchair because she couldn’t sit up. We left the wheelchair there when we left.

“We want to build another one on the west coast. It’s really amazing. They can create new pathways in the brain.”

Remaining funds generated form the fossil will be used to build a brain research institute in Lincoln.

Oshaughnessy added it’s only fitting for funds raised from a fossilized brain to be used for modern brain research.

Paraeducator who had relationship with minor enters pleas

On Saturday evening, 21-year-old Andrew Klaus was arrested for multiple traffic violations as he drove a dirt bike along Hoyt Street in Beatrice.

Beatrice Police responded to a report Tuesday of a man in a ski mask circling the exterior of a residence on North Ninth Street.

Brian Daake was on duty with Beatrice Fire and Rescue’s B shift 20 years ago on Sept. 11.

Midwest dealing with resurgence of armyworm

Lawns are important to us all. They can be time consuming and a lot of work, but it is all worth it for a nice-looking lawn. However, when a p…

Howell Thomas, senior paleontological preparator at the Natural History Museum of Los Angeles County, California, poses with a rare fossil of a whale brain. The fossil was discovered by a Burchard woman nearly a decade ago.

A rare fossil of a whale’s brain — at 25 pounds and 16 by 13 inches — was discovered by Pepper Oshaughnessy, of Burchard. The fossil has been in her possession for nearly a decade. It wasn’t until five months ago that it was declared a rare fossil.