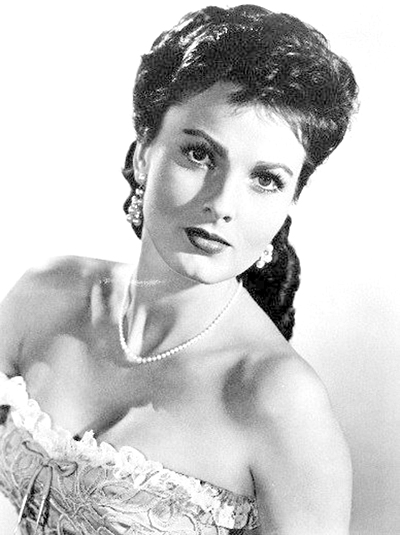 An early photo of Ursula Taylor. Taylor was an actress and model who married Gage County native, actor Robert Taylor. 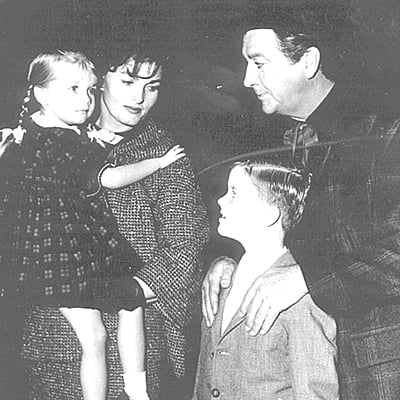 Ursula Thiess Taylor, the widow of Hollywood movie star Robert Taylor, died June 19, at an assisted living care center in Burbank, Calif. An artist and an actress, she was 86 years of age.

Born Ursula Schmidt on May 15, 1924 in Hamburg, Germany, where her father was manager of a print shop, she had a normal childhood until 1939, when the authorities of the Third Reich drafted her for one year as a farm laborer.

Upon returning to Hamburg, where she resided throughout World War II, she began her stage career and adopted the name Ursula Schmidt-Huth.

In 1942, she married movie producer George Thiess and gave birth to daughter Manuela in July 1943 and son Michael in June 1945. Two years later, the marriage ended in divorce.

Her modeling career began in 1948 in Berlin, then continued in Munich. Photos of her appeared on the cover of magazines and she had small movie roles. After being offered a movie contract with RKO Pictures, she relocated to the United States in 1951, the same year she was featured on the June 4 cover of Life Magazine.

In Hollywood, Ursula Thiess appeared in 1953 with actor George Nader in “Monsoon,” then in 1954 with Robert Stack in “The Iron Glove” and with Rock Hudson in “Bengal Brigade.”

Then in 1955 she appeared with Glenn Ford in “The Americano,” and in 1956 with Robert Mitchum in “Bandido.”

Meanwhile, she had met Gage County native Robert Taylor on a blind date in April 1952 after his marriage to actress Barbara Stanwyck had ended the previous year. She visited Beatrice in May 1953 with Taylor and his mother Ruth Brugh, which included a stop at his Filley birthplace. Sometimes she also accompanied him on his hunting and fishing excursions later on.

After her marriage to Taylor on May 24, 1954, at Jackson Lake, Wyo., Ursula gave birth to their son Terry in June 1955 and daughter Tessa in August 1959. The family settled on their 113-acre ranch at 3099 Mandeville Canyon Rd. in San Fernando Valley, just a 20-minute drive from Los Angeles.

Ursula had occasional roles with her husband in his weekly television series “Robert Taylor’s Detectives” on the ABC and NBC Networks from 1959 to 1962, but she preferred to concentrate on her family life and enjoyed painting, making shadow boxes and decorating. Among the couple’s close friends were Ronald and Nancy Reagan and Ivy Mooring.

Ursula visited Nebraska with her husband in October 1963 when he received an honorary doctorate from Doane College and again in mid-January 1968 when his business interest in Grand Island opened.

In 1969 she suffered the tragic loss of her son Michael Thiess on May 26 and then her husband on June 8, after months of attempted recovery from surgery for lung cancer.

Ursula raised her surviving children, and after the sale of the ranch four years later, resided at 1940 Bel Air Rd. in Los Angeles. In 1974, she was married to Marshall Schacker, an international film distributor. Marshall died of cancer 12 years later.

Meanwhile, Ursula had undergone surgery for a benign brain tumor in 1979, but recovered to lead a normal life, often visiting Hawaii while her children pursued their careers.

Later she engaged in volunteer work at Children’s Hospital associated with the University of California at Los Angeles. She also worked on her autobiography, which was privately published in 2004 under the title “... but I have promises to keep: My Life Before, With and After Robert Taylor.”

Ursula returned to Nebraska for the 1994 and 1996 Robert Taylor Conferences in Beatrice, which included the Oct. 2, 1994 dedication of the Robert Taylor Memorial Highway on the portion of U.S. Highway 136 between Beatrice and Filley, followed by a ceremony at Doane College.

Surviving relatives of Ursula Thiess Taylor include son Terry and his wife, daughter Tessa and daughter Manuela. Her cremated remains are scheduled for placement at one of her favorite locations.

E.A. Kral is an author and historian currently living in Wilber.

Ready for his close-up

An early photo of Ursula Taylor. Taylor was an actress and model who married Gage County native, actor Robert Taylor.