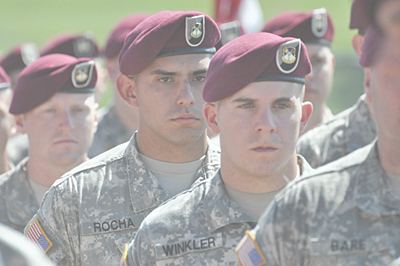 Members of the 1-134th Cavalry, Troop C march into Haymarket Park Saturday. The unit is being deployed to Afghanistan. 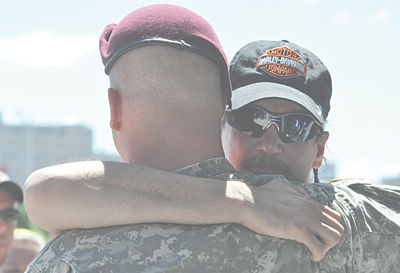 LINCOLN — An estimated 3,000 people filled the stands at Haymarket Park Saturday morning to send off 300 men and women of the 1-134th Cavalry Squadron of the Nebraska National Guard.

The unit is headquartered in Lincoln with bases in Beatrice, Hastings and Omaha.

The 1-134th will deploy to Fort Shelby near Hattiesberg, Miss. and California for two months of additional training before being deployed in Afghanistan where it will partner with an Iowa unit for reconnaisance and surveillance missions.

It is the first deployment for the unit to Afghanistan, as the 1-134th has recently served in Iraq in 2005-2006 as well as Bosnia-Herzgovinia and Kuwait.

Heineman recognized the 134th and their families and asked them to stand so they could be appreciated.

“I’m honored to be with you today because I am very, very proud of the men and women serving in the Nebraska National Guard,” he said. “You do an incredible job, an unbelievable job.”

The governor also made a promise to the men and women who would be deploying to Afghanistan.

“By the time you get to Afghanistan, we will have figured how to get cable TV over there so you can watch the Husker football games,” he said to thunderous applause.

Heineman also told the soldiers the citizens of Nebraska stand behind them.

“We appreciate your willingness to defend our freedoms and our liberties and to make the world a safer place,” Heineman said. “As your commander-in-chief and a veteran myself, I especially appreciate your service to the United States of America.”

Nelson told the crowd he was honored to attend the deployment ceremony and praised the sacrifices of the soldiers.

“You are America’s finest, and all Nebraskans salute you today and everyday,” Nelson said. “We will never forget your sacrifice — it’s your sacrifice that makes our nation stronger.”

Nelson said through the efforts of units like the 1-134th, equality and liberty are being spread around the world.

“Your sacrifice sends the message of freedom to everyone on earth, friend or foe,” he continued.

“Those who would do us harm only need to look at why we gather today and they’ll understand that America never wavers, no matter how great the price,” Nelson said.

Johanns said the view from the infield into the stadium seeing the support of family, friends and loved ones was “inspiring.” He went on to say Saturday’s deployment was the accumulation of months of training and preparation and praised the leadership of Brigadier General Judd H. Lyons and his team.

The senator met with the unit during its last deployment in Iraq, and said the situation in Afghanistan currently resembles that conflict.

“The situation in Afghanistan today is much like it was in Iraq in 2006,” Johanns said. “Things were tough then, but just as the American military turned the situation around in Iraq, I’m confident the Cav will contribute to a successful and similar turnaround in Afghanistan.”

Fortenberry told the soldiers he appreciated their sacrifice and willingness to serve their country.

“I know this is bittersweet,” he said. “Your number has been called again and it’s time to do your duty and I know that you do it willingly out of love for your country, but your heart aches because you are leaving your family again.”

“This is something I’ve wanted to do my whole life,” Private First Class Nate Huckeby said.

Members of the 1-134th Cavalry, Troop C march into Haymarket Park Saturday. The unit is being deployed to Afghanistan.