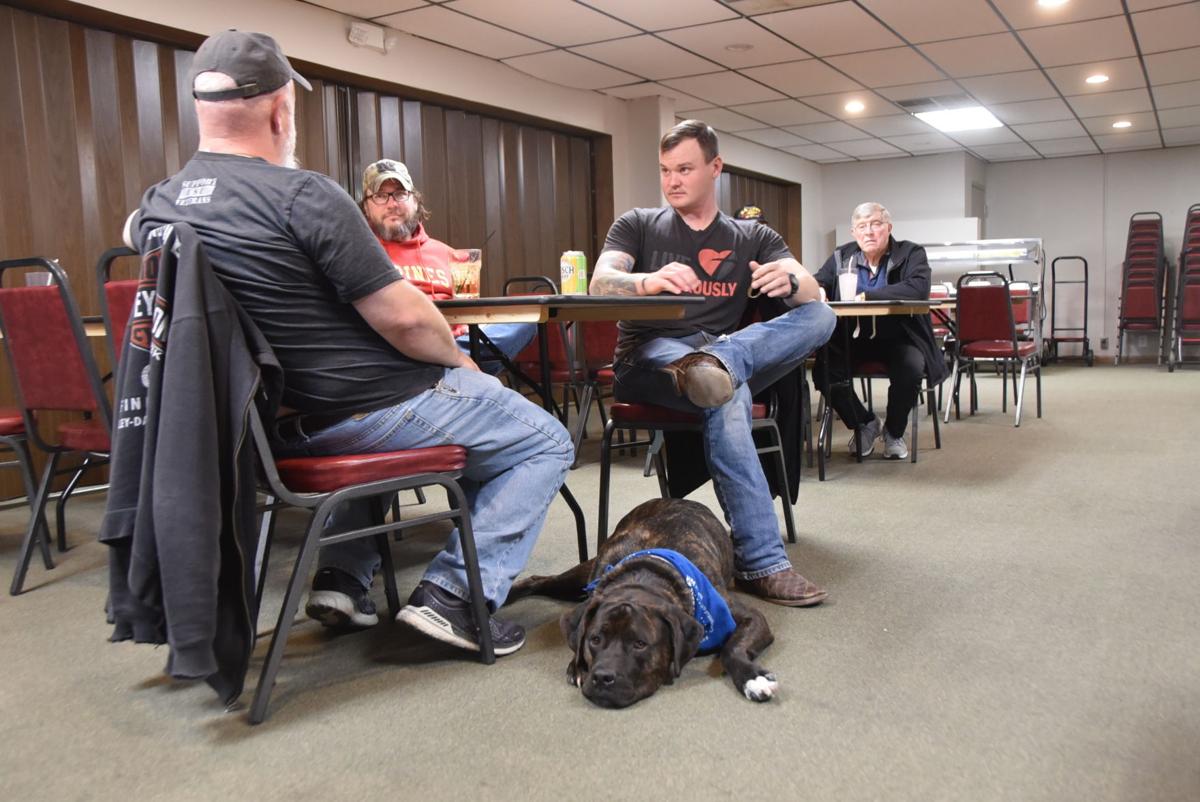 Local veterans meet in the Legion Post #27 building for the Nov. 22 Beatrice Buddy Check. The group meets the 22nd of every month from 6-8 p.m. 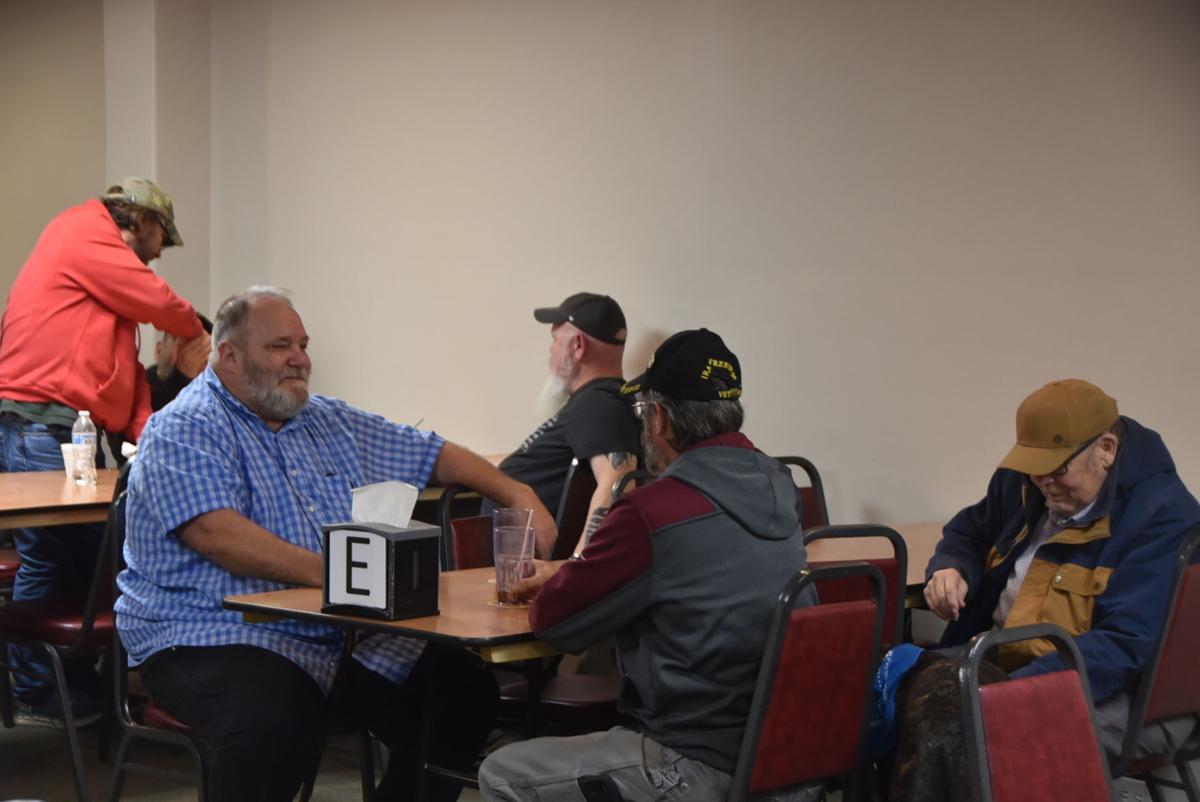 Beatrice Buddy Check attendees make small talk at their Nov. 22 meeting. The veteran group meets every month, where they engage in casual conversation and check in on each other.

Veterans have a 50% higher suicide rate than those who have not served in the military, according to government reports.

“That is why we do the Buddy Check meetings every month on the 22nd of the month,” said Davin Stege, a veteran and volunteer with the program.

Jolien and Brad Thompson had attended a state-wide VFW conference and heard about the program and how it had been working in other communities.

“It was something that was near and dear to Jolien,” said Scott Bates, Gage County Veterans Service Officer.

The group started meeting at the Vet’s Club in November of 2020. It is sponsored by the American Legion Post #27, Legion Auxiliary Post #27, Legion Riders #27, Sons of the Legion #27, Marine Corps League Homestead Leathernecks, VFW #1077, and VFW Auxiliary #1077.

“Some months we have a speaker and some months we just hang out. It’s a social gathering of Veterans dedicated to reducing and eliminating Veteran suicide,” Stege said. “We continue our service by gathering with fellow Veterans. We call and reach out to those who served at our side.  We stood together then and we stand together now.”

“We did some fundraising and are able to provide a free meal to everyone that attends,” said Stege.

Question, Persuade and Refer Gatekeeper(QPR) training was provided at a monthly meeting in March that taught veterans the signs of a person considering suicide and how to help. Seventeen people attended and the training.

“We started seeing an increase in attendance in August or since the pull-out of Afghanistan.  It’s taken a toll on a lot of veterans,” Stege said. “A lot of us really started questioning some things. It gets to you.”

Leon Hagan and Don Junker started coming to Beatrice Buddy Check early on. For them, it was a place to meet with old friends, swap stories and partake in a veteran community. The U.S. withdrawal from Afghanistan gave them more reason to come.

The two fought in Vietnam: Hagan flew 175 missions as a helicopter gunner, and Junker served as an artilleryman. Hagan said he didn’t want returning veterans, or ones reeling from the circumstances of the withdrawal, to be as isolated as he felt when coming home from Vietnam.

“They can be made to feel like there’s no place to go,” Hagan said. “We don’t want these guys to have to face life alone. This gives people a place to go.”

Bates said the group has veterans from Vietnam, Afghanistan, Iraq, Persian Gulf and every branch of service.

“There is always someone they can relate to at the meetings,” he said. “They share their stories and their feelings.  We try to support the veterans that are having problems finding a job or maybe with their family.”

“We’re sharing resources and last month we were able to invite the spouses of the veterans to the Buddy Check meeting.  They are likely to be the first to recognize that there’s a problem,” Bates said.

Stege said there are always people at the meeting who share their phone numbers and are willing to take phone calls at 3:00 a.m. to help a fellow veteran.

“I’d like to expand to more meetings per month just to offer more support,” Stege said.

“We have a large veteran community, but unless they reach out to us, we’re not aware that they are in the community,” Bates said. “We have about 2,500 veterans recorded in our system in the area, but I know we’re not reaching them all.”

Stege said seeking help can, at times, be hard for veterans.

“Unfortunately, the majority of the veterans are stubborn and proud,” Stege said. “They rarely reach out for help and especially during this time of year, there is more isolation. Sometimes they don’t even talk about it.”

Hagan and Junker said it was hard to get help after Vietnam. They struggled with isolation on two fronts: one self-inflicted—thinking the armor of youth could hold out against the pain—and one born from a lack of access to clubs and support groups. They said the Buddy Check program helps them and allows them to help others.

“And I’m not ashamed to tell anyone that I go and see a psychiatrist,” Junker said.

Hagan said seeking help, getting support, is often times seen as a weakness, but it’s far from it.

“If anything, it’s a strength,” Hagan said.

Stege said suicide was a serious reason to get involved with Buddy Check.

“I don’t know too many people that don’t know at least one person who has completed suicide or has been there themselves,” said Stege.

Sarah Smith, Filley, has been involved with the program.

“Buddy Check gives Veterans an opportunity to connect with other Veterans with no strings attached and no expectations,” Smith said. “Our Veteran community and network has been a critical part of my life I can only hope to do my part to share it with others. While we may have served in different wars, eras or have very diverse backgrounds, we share the common ground of service and only those who have served can truly understand. You don’t realize how much you miss and need that connection until you go without, and then have it back in your life.”

The Buddy Check program is open to all veterans.  There is no membership requirement at the Vet’s Club to attend the meetings.

Sabrina Glynn has always loved working with kids, but her run for Beatrice Public Schools Board isn’t just about them.

Standoff in Adams ends with one dead

ADAMS -- The Nebraska State Patrol is investigating an incident that occurred overnight in Adams that led to a standoff for several hours.

Joseph Brewer came to Beatrice more than a decade ago after getting his PhD in inorganic chemistry from the University of Nebraska-Lincoln.

When Dave Eskra was a senior at Beatrice High School, he said many of his peers couldn’t wait to get out, to go to a big city and live in a di…

Two people were injured in a two-vehicle crash on Highway 77 near the Homestead Plaza Truck Stop on Tuesday afternoon.

Gage County officials are moving forward with a proposal that could bring high-speed internet to nearly all residents in the county.

WYMORE -- In the cold of Friday morning, a fire erupted in the laundry room of Hope-Wymore Assisted Living Center.

The new lobby of the Beatrice Mary YMCA hums with spinning treadmills, thuds with weights and clanking bars.

WATCH NOW: Bruce Miller sits down to talk with Oscar nominee Diane Warren about her success

Blinken: No concessions to Russia on Ukraine

Blinken: No concessions to Russia on Ukraine

Local veterans meet in the Legion Post #27 building for the Nov. 22 Beatrice Buddy Check. The group meets the 22nd of every month from 6-8 p.m.

Beatrice Buddy Check attendees make small talk at their Nov. 22 meeting. The veteran group meets every month, where they engage in casual conversation and check in on each other.