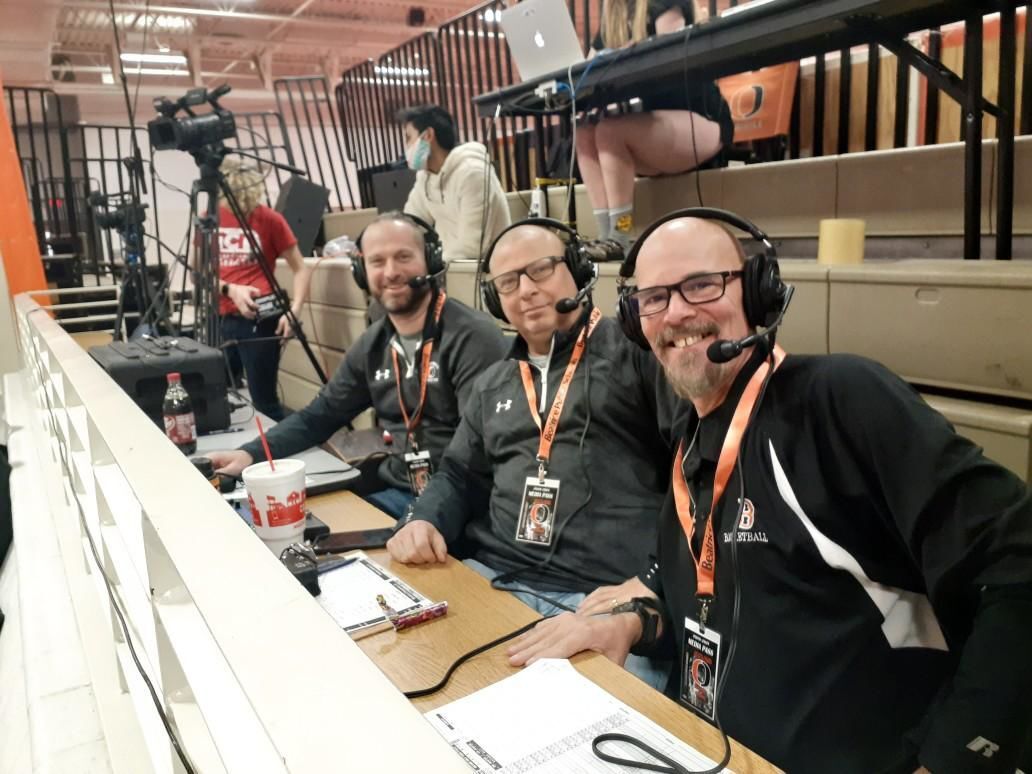 Bryan Cook, right, announces a game for Beatrice Public Schools. Cook suffered a hemorrhagic stroke in February 2017. At 53 years old, he was paralyzed on his right side and had to learn to swallow, talk and walk again. 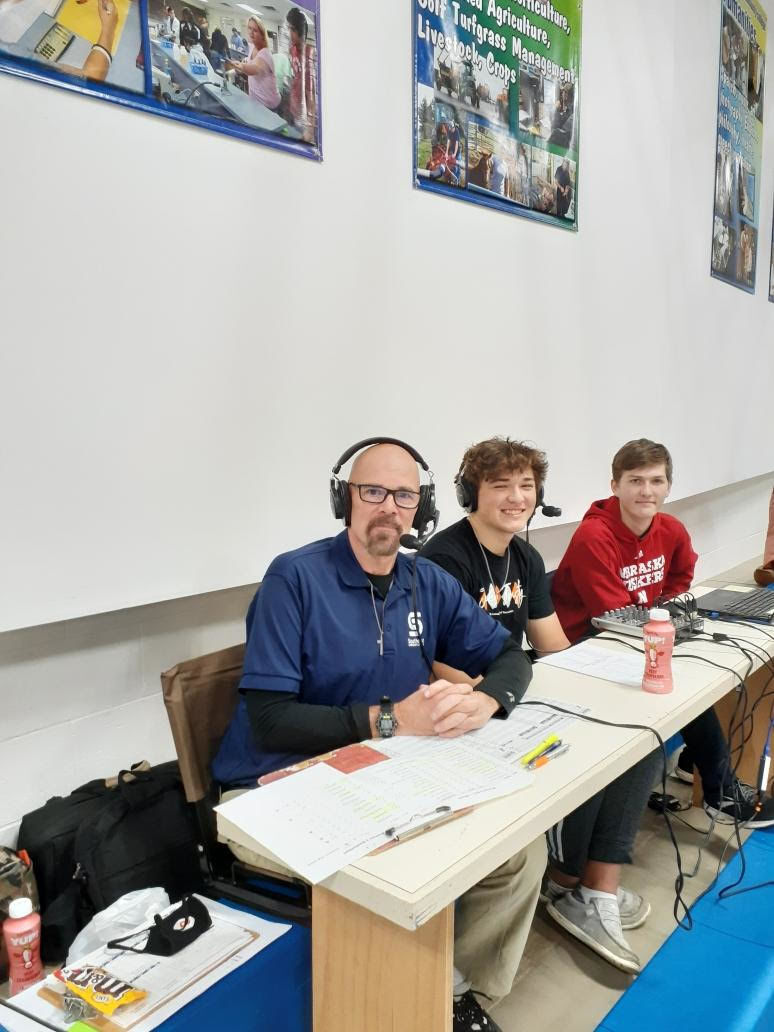 Bryan Cook, right, has gotten active in his community again after suffering a stroke in 2017. Cook is currently employed at the Beatrice Middle School as a paraprofessional in the Behavior Disorder area.

He said if he had one message to the world, it would be to never give up on your dreams, on your life or yourself.

“It takes some work sometimes, but it’s worth it in the end,” Cook said. “I wear this cross as a reminder that God gave me a second chance and I’m going to run with it.”

Cook suffered a hemorrhagic stroke in February 2017. At 53 years old, he was paralyzed on his right side and had to learn to swallow, talk and walk again.

“I’m convinced that I would not have survived that stroke anywhere else in the world,” he said. “They didn’t expect me to live, but I had my family, friends and community that supported me,” Cook said. “It motivated me to get better.”

“It was amazing the support that we received,” his wife Shannon Cook added. “I think we’ve always been a family that wanted to give back and show appreciation, but probably more after the stroke. It made us realize how fortunate we are.”

Cook is currently employed at the Beatrice Middle School as a paraprofessional in the Behavior Disorder area.

“It’s hard work, but that’s what I want. I’m making a difference,” he said. “Sometimes I just pat them on the back and say ‘I believe in you’ and I think that goes a lot farther than the consequences sometimes.

“They need to know they have someone behind them.”

Cook said he’s had some coaches throughout his life that did the same thing for him.

“I was probably the world’s worst little league baseball player in the history of the game, but I had a coach that saw I was left handed and encouraged me as a pitcher,” he said. “I went from being the worst to a scholarship player in college because I had that one coach that believed in me.”

Cook was inducted into the Nebraska Baseball Hall of Fame in February 2020. He is a 16-time award winning sports director at KWBE radio for his community service and broadcasting excellence.

Cook said he helps support some of the coaches at the Beatrice Middle School.

“I let them coach, but I’m there to instill some confidence in the kids. I told a couple of girls today that they were going to be state champions. I love it,” said Cook.

Cook’s dad was in the Navy and was hard on him growing up. His mom died when he was 12 years old.

“We moved all the time and growing up I never felt like I had a home. I grew up in southern Texas and Coffeyville, Kan.,” Cook said. “Later when I served in the Army, I was stationed at different bases and traveled to different countries, but I never had a place that I could call home until I moved to Beatrice.

“It’s the people. They made me feel like I had a home and I never plan to leave.”

Cook volunteers his time and announces the Beatrice Bombers Football games, the Middle School and SCC.

“I want it to sound professional and I love being there for the kids,” said Cook. “I help with a project at the Beatrice High School that teaches broadcasting and how to run cameras. It’s so much fun.”

Cook also works at the golf shop at the Beatrice Country Club.

“It’s good physical therapy to walk on uneven ground and the people are amazing,” Cook said. “Believe it or not, the stroke helped my golf game. We have fun.”

Cook has also been a member of the Gage County Ag Society.

“It’s about the kids and what we can do for them no matter what the 4-H and FFA project is,” Cook said. “It’s about seeing them be successful and the connections we make. The races and the fair is fun, but as a board we’re family. That’s what it’s all about.

“God closed some doors after the stroke, but that’s okay. He opened some others. I’m probably happier than I’ve ever been. I have a purpose.”

More than 75 community members arrived with their work gloves to pick-up trash in Adams in October as a fundraiser for the Hoffman-Ideus family.

Palmyra teacher killed in hunting accident 'was the glue' in large, loving family

Kade Reiman is being remembered as someone who lived fully and with a “fierce love” for others.

Where does Donald Trump stand now?

Bryan Cook, right, announces a game for Beatrice Public Schools. Cook suffered a hemorrhagic stroke in February 2017. At 53 years old, he was paralyzed on his right side and had to learn to swallow, talk and walk again.

Bryan Cook, right, has gotten active in his community again after suffering a stroke in 2017. Cook is currently employed at the Beatrice Middle School as a paraprofessional in the Behavior Disorder area.