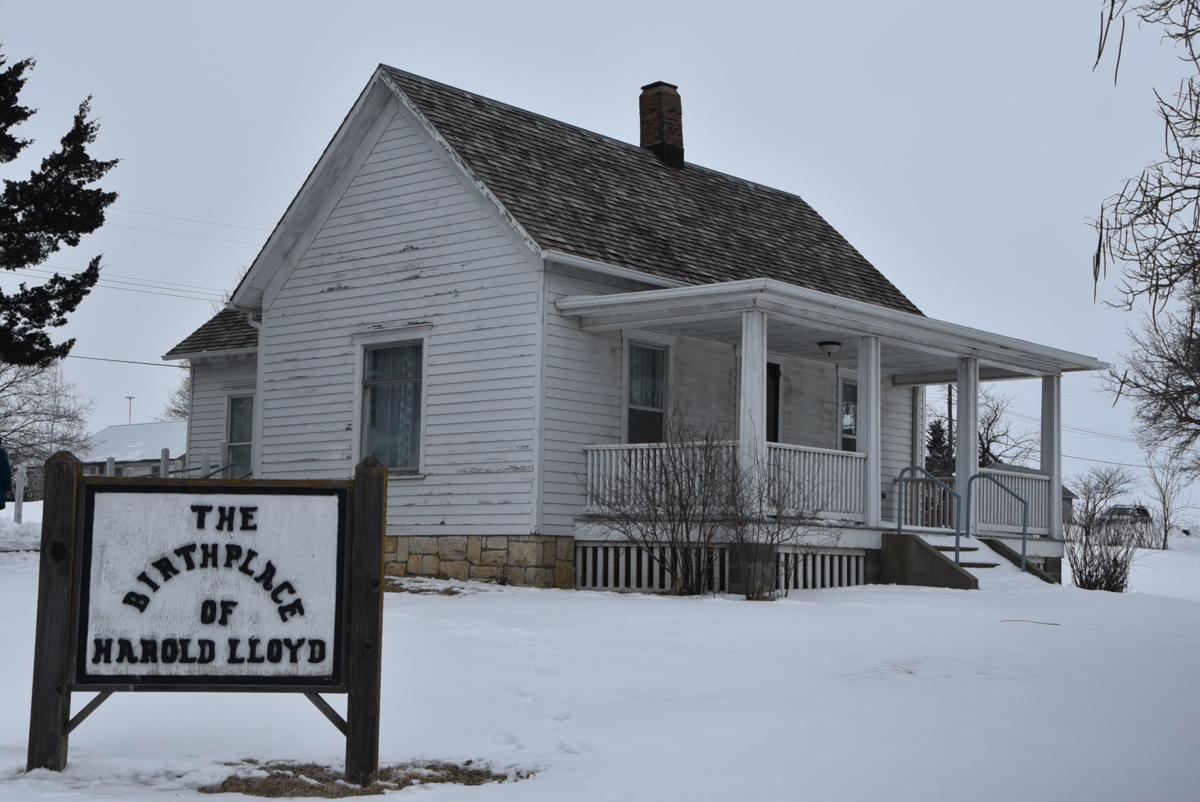 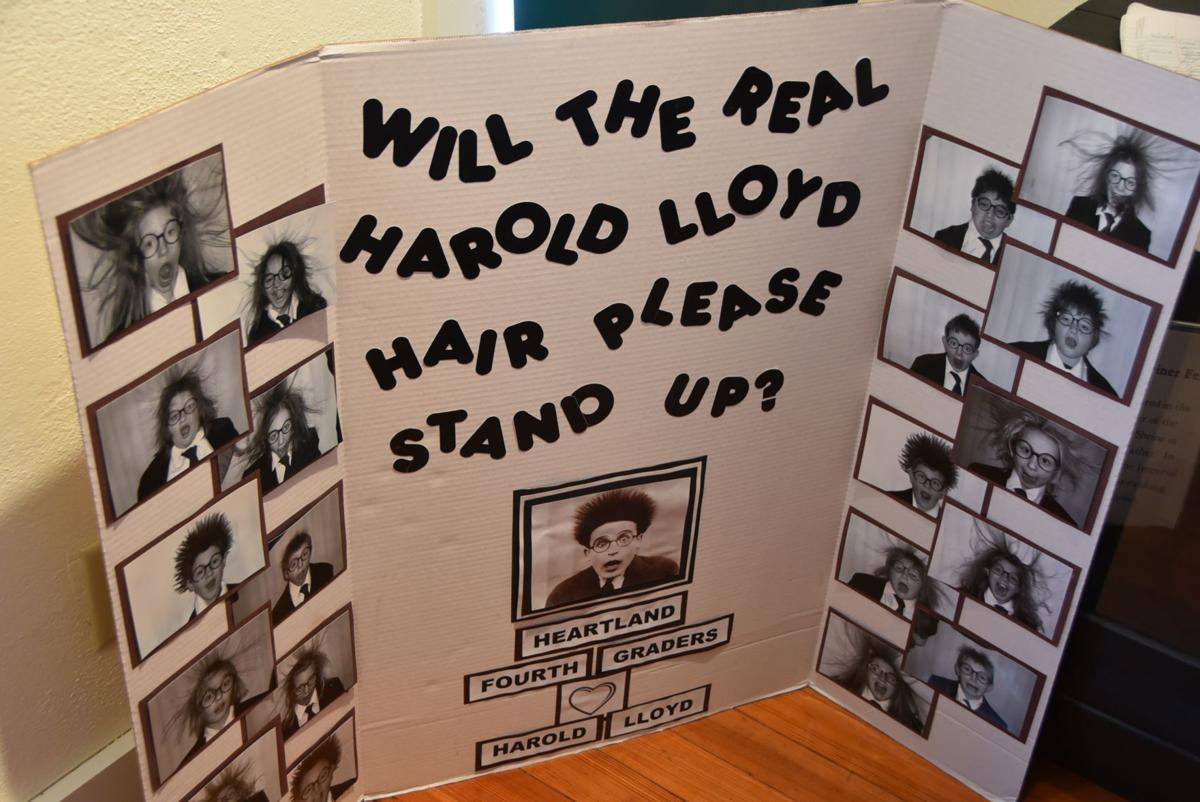 A group of Heartland fourth graders studied Lloyd and his hair-raising stunts as part of a chapter focusing on famous Nebraskans. The poster is currently part of the Harold Lloyd Home museum in Burchard.

By the time he was 18, Harold Lloyd had lived in Beatrice, Burchard, Pawnee City, Omaha and Humboldt. He would go on to become a star of the silent film era, who always remembered where he came from.

Scott Eyman, a film historian and keynote speaker for the event, spoke about Lloyd’s film history.

“He basically made two kinds of movies: one in which he played a rich, spoiled, entitled goof who learns to get beyond his shallow belief system by the end of the picture,” Eyman said. “The other was as a striver. A decent young man next door who was trying to make it in a competitive world. Harold’s character was essentially the kind of guy you would want to marry your sister, because he’d never let her down. Lloyd’s movies are basically about embarrassment, and embarrassment’s cousin, humiliation. Lloyd’s a virtuoso at conveying these two qualities.

“As with his on-screen persona, Lloyd was always concerned with being perceived as a solid citizen, and basically he was a solid citizen. He was the imperial potentate of Shriners, built hospitals for children, and got an honorary Oscar 20 years before Charlie Chaplin would. But, as befitting his sensitivity to appearances, he sometimes indulged in fantasies about his family.”

Laureen Riedesel, Beatrice Public Library director, spoke about Lloyd’s life growing up. How his father was understood to be an alcoholic – although Lloyd never said as much – who could not sustain employment and moved his family between Nebraska and Colorado.

“He was born in 1893, a year that became famous for an international 'panic' or depression that ended in the boom years in the West, Riedesel said. “At the end of that period, people lost jobs and homes all across the country. As Harold recounted his youth, it sounds like he was the Tom Sawyer in southeast Nebraska. This is interesting, since most of us would not describe his boyhood in those terms. His family life was not ideal.”

While in Beatrice, Lloyd and his other brother made money working for the circus and selling popcorn at local train depots.

Lloyd got his first acting appearance in "Macbeth" with the Shakespeare Repertory Company.

Eventually Lloyd’s family moved to California, where he started working on movies, receiving 213 acting credits in total. Due to the amount of movies he was in, Lloyd made more money than Charlie Chaplin and Buster Keaton.

Lloyd’s most famous film was “Safety Last!” where Lloyd famously dangles from a clock several stories in the air.

“When asked about all of those hair-raising stunts that he did in his movies, he credited his local boyhood adventures as the starting point for these activities, Riedesel said. “When Harold lived in Beatrice, construction had begun on a hotel at the northwest corner of Fifth and Ella streets. The deep basement was dug and the support beams for the first floor had been installed when the project stopped due to lack of funds. Harold loved to walk across the beams above the gaping hole of this basement. The police would spot him and chase him away.”

Riedesel said the Beatrice Police Department was eventually built on that site.

Lloyd’s birthplace and home in Burchard is currently a museum dedicated to his work.

Esther Tegtmeier, one of the curators and a previous occupant of the home, explained how Lloyd performed most of his dangerous stunts with only one hand.

“They were doing a still for the little shorts they had with the movies,” Tegtmeier said. “He was supposed to be holding a grenade and lighting it with a cigarette. There was not supposed to be a live grenade in that prop box, but there was. It exploded, and it knocked a hole in a 20 foot ceiling, and it knocked him unconscious. He was blinded for quite a while.”

Lloyd lost half his palm as well as his thumb and index finger on his right hand. After the incident, Lloyd wore a tightly fitted glove over a prosthetic thumb and finger while filming, and staged scenes to favor his left hand. Lloyd also filmed mirror reflections of his left hand as his “right,” and used hand doubles for certain close-ups, to the point that audiences were unaware of his disability.

“You know that half empty, half full glass? I think Harold thought he had a full glass no matter what. And if he didn’t think that, he wanted you to believe that,” Riedesel said.

A screening of “The Kid Brother” was shown at Beatrice Community Players Theater with accompaniment from Ben Model, a silent film accompanist and composer.

Eyman explained why – despite being the fifth celebrity and first comedian to cement himself at Grauman’s Chinese Theater – Lloyd is lesser known now than Chaplin and Keaton.

“He absolutely refused to put his movies on television,” Eyman said. “He had offers, and he turned them all down. He wouldn’t give up control of his films. He didn’t want commercials interrupting the comic flow. He simply didn’t want to play the broadcast game. By the time Harold Lloyd died in 1971, literally two generations had grown up who had never seen Harold Lloyd any place, because he retired from films in 1938. And that meant that when his films actually started distributing, they had a much, much steeper hill to climb. Lloyd’s obstinance worked against him.”

A group of Heartland fourth graders studied Lloyd and his hair-raising stunts as part of a chapter focusing on famous Nebraskans. The poster is currently part of the Harold Lloyd Home museum in Burchard.