A rendering from JEO Architecture shows what Beatrice Fire and Rescue's future station may look like. 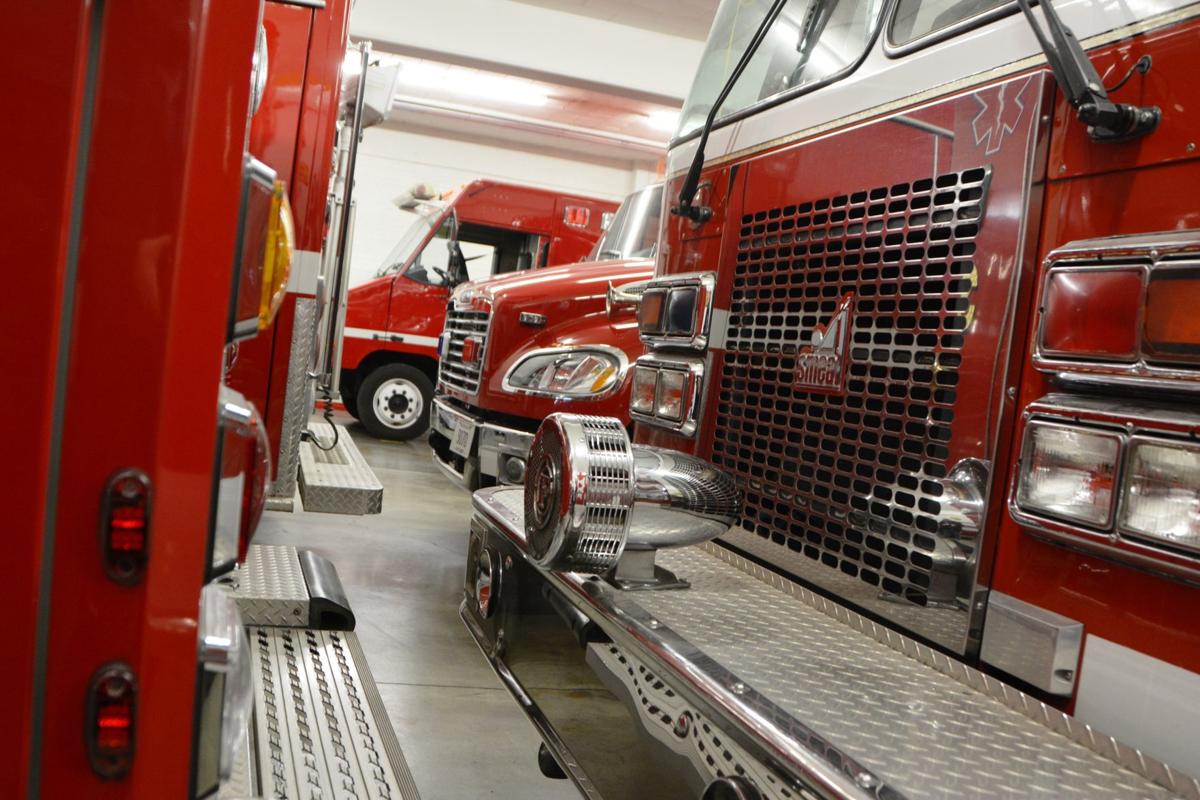 Emergency vehicles, some only eight inches apart, are crammed inside the tight quarters at the Beatrice Fire and Rescue station. A new station will provide more space for the department.

The estimated $7.9 million station will be built on the east side of U.S. Highway 77, between Bell and Scott Streets, and will replace the current home of Beatrice Fire and Rescue in the lower level of the city auditorium, where it was been located since 1965.

Project architect Marvin Larson of JEO Consulting Group presented the design to the council, which is estimated to be roughly 31,000 square feet on a 90,000 square foot block. The current station is around 6,000 square feet.

Larson said the building will have seven floor-heated bays for the trucks, three of which will have drive-through access onto Seventh Street.

“What we’re looking at is immediate access to Highway 77 to allow for quick responses,” Larson said.

Larson said the state approved the vehicles exiting onto the highway, but that they are looking into lighting or similar cue that the department is responding to a call.

“We’ll be working on that over the next few weeks to determine if that’s going to be required,” Larson said.

The new station will include offices, firefighter rooms, gear storage and a kitchen and dining area, as well as a display area for past equipment, an exercise room and a training tower that can be arranged to practice different emergencies.

Larson says the interior is designed to allow for quick responses during actual emergencies.

During the meeting, the council approved an ordinance issuing up to $7.25 million in bonds to purchase the station, largely supported by a half-cent additional local sales tax.

Around 53 percent of voters supported a sales tax issue in the November 2018 general election, which came into effect April 1 and will generate around $1 million annually. The tax will be removed once the station is paid off, or in 10 years.

Scott Keene with Piper Jaffray said the bonds are also secured through interlocal revenues and the city’s general fund.

"The final maturity of the bonds can be no later than Dec. 1, 2029,” Keene said. “It's a 10 year amortization, which in the municipal bond world is a very fast amortization, so that's good. Rates are still very favorable right now, very low, so this is a good time to be getting into the marketplace.”

Keene said the bonds can be issued all at once or in a series, and be refinanced after five years if interest rates are favorable.

The council moved forward with acquiring the property for the fire station, at a cost of roughly $627,500, in early August.

City attorney Abby Stark had the council approve a resolution during Monday’s meeting hiring Midwest Right of Way Services to provide relocation services to owners of one parcel of land the city intends to acquire for the station location.

“State statute requires that any time a person or business is displaced to make way for a publicly funded project, they must be provided relocation assistance…This is the same company the city has hired in the past to provide relocation services when we were acquiring ground for the airport,” Stark said.

A contract between the city and the current landowners sees the city closing on the land by early November.

Larson said they intend to receive bids for the fire station in February, with construction to begin in the spring of 2020.

A trail from Beatrice’s Big Blue Water Park to Hannibal Park, a project that has been in the works for over eight years, has been approved for…

During a special meeting Monday evening, the Beatrice city council discussed revising its tobacco policy to ban smoking in the parks.

Garold Kleveland can still see the faces of many of his former employees.

The Beatrice City Council amended the 2019 city budget due to unanticipated donations and projects.

Three properties have been condemned in downtown Beatrice since 2015, and the building at 407 Court St. was demolished.

Business owner Dion Hancock has recently opened two new companies and provided space for other entrepreneurs off of Highway 41 in Sterling.

After a roughly 90-day trial of the stop signs being removed from the Third Street and Marlborough Avenue intersection, the Beatrice City Coun…

Beatrice residents will soon see the demolition of the former Kleveland Service Station, Jan’s Cleaners, and some uninhabited rental houses as…

A rendering from JEO Architecture shows what Beatrice Fire and Rescue's future station may look like.

Emergency vehicles, some only eight inches apart, are crammed inside the tight quarters at the Beatrice Fire and Rescue station. A new station will provide more space for the department.