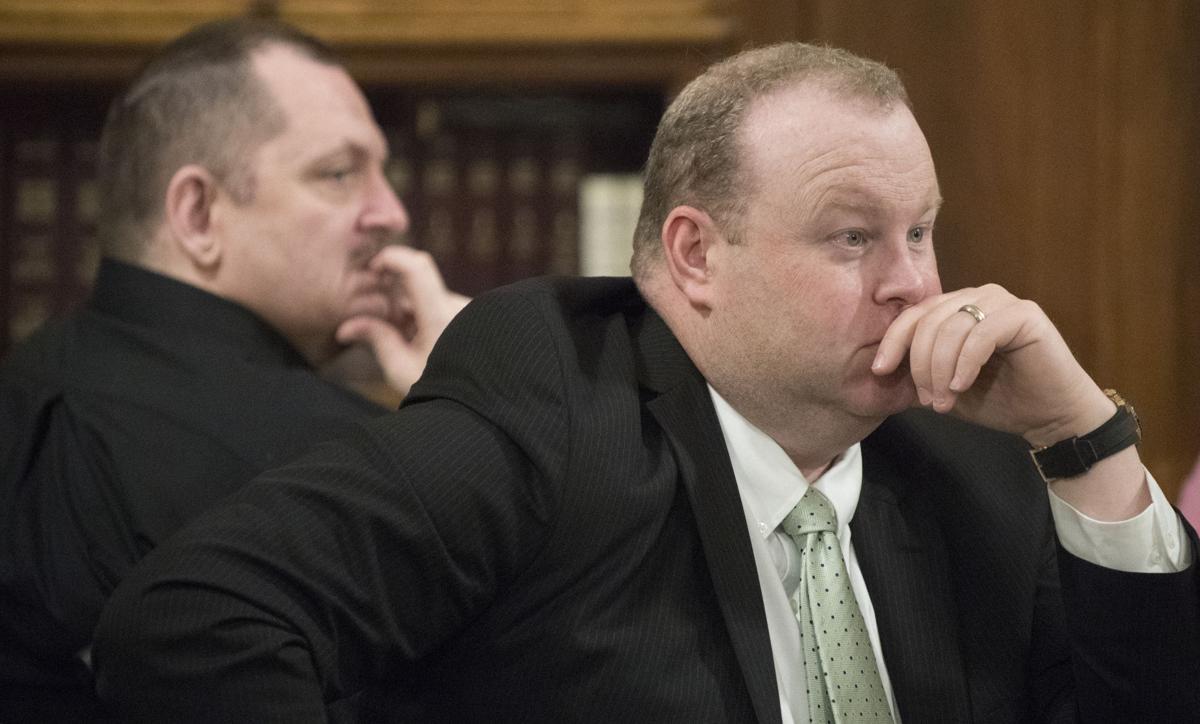 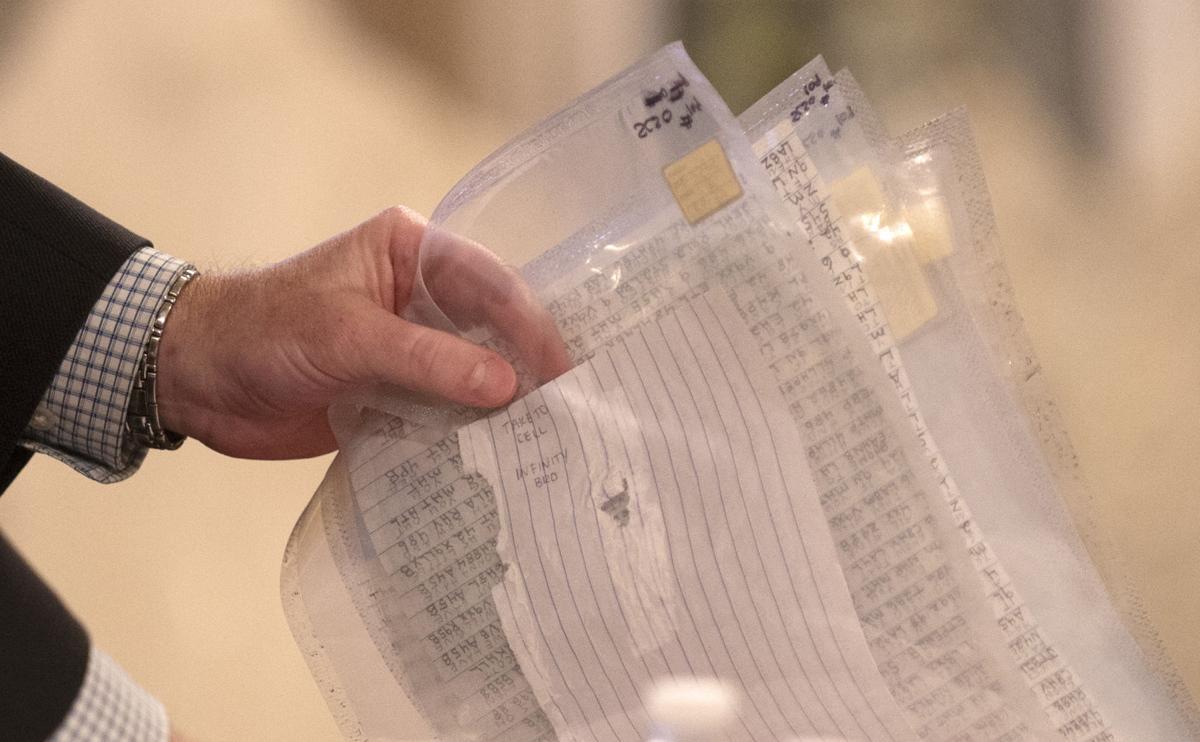 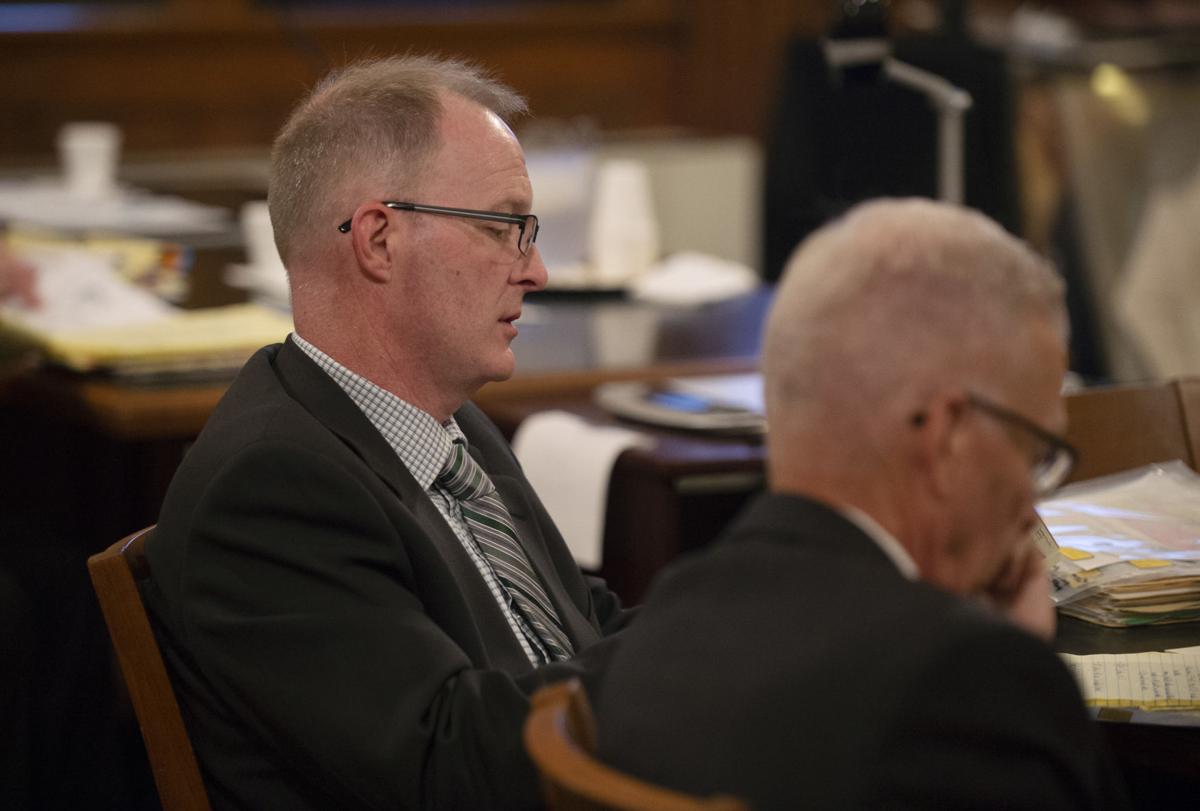 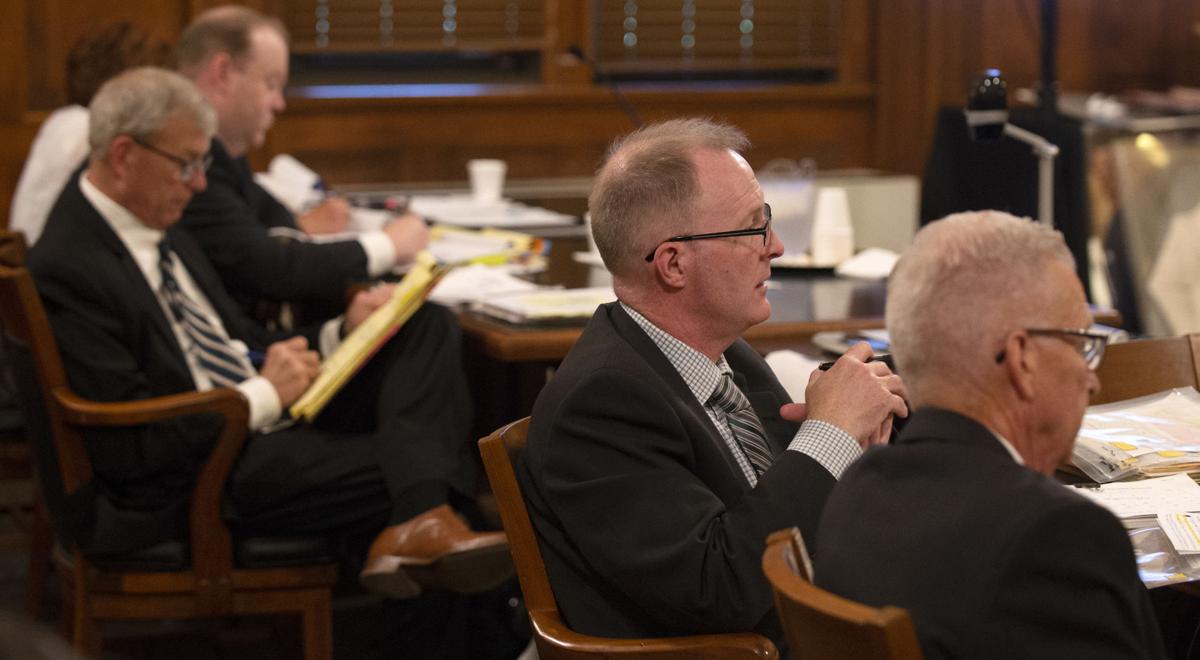 The defense and prosecution, including Assistant Attorney General Mike Guinan (center right), are shown June 28 at their respective tables during Aubrey Trail's trial at the Saline County District Court in Wilber. 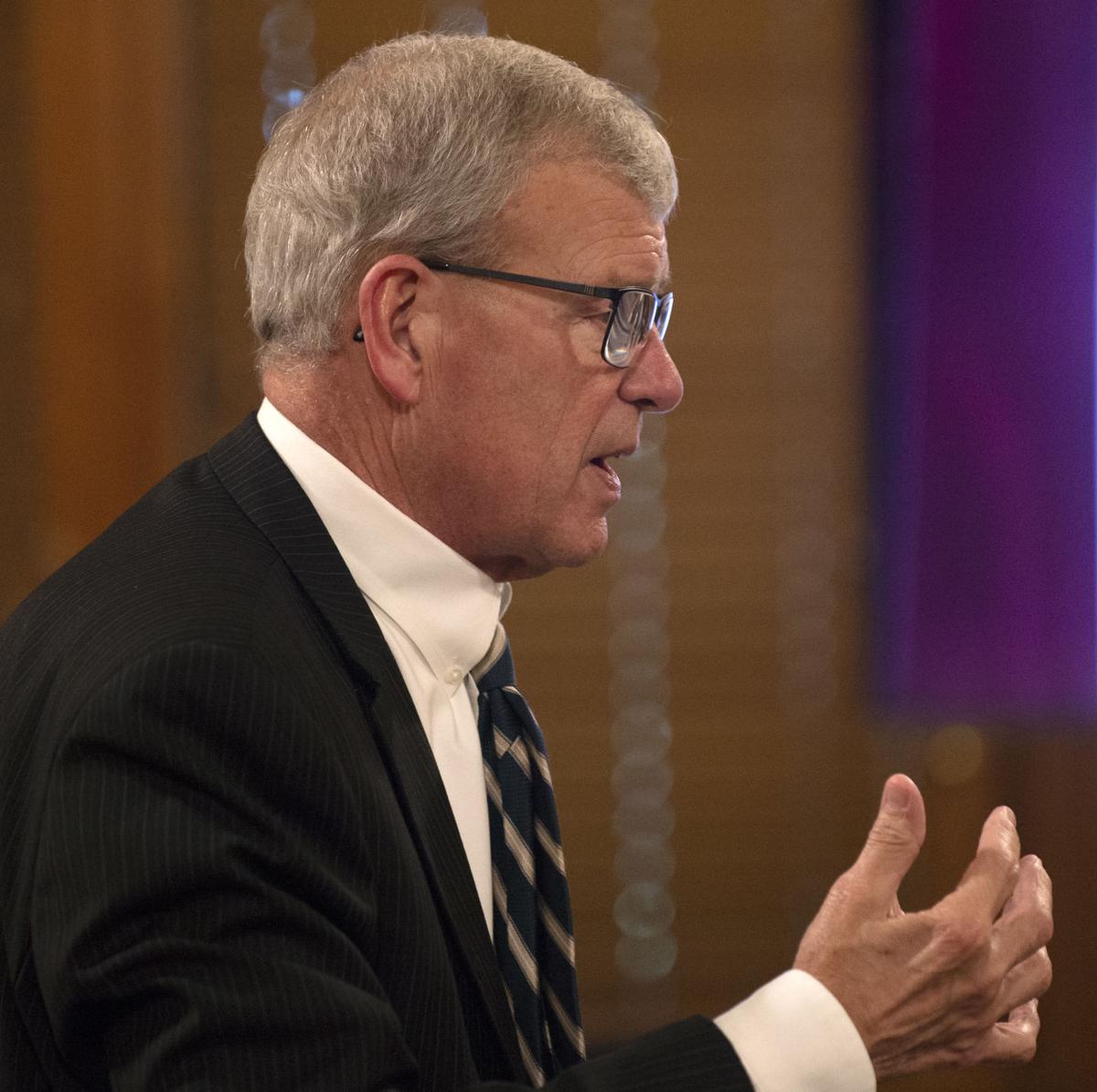 Defense attorney Joe Murray objects to FBI special agent Michael Maseth being asked "whose handwriting is this" on Friday during Aubrey Trail's trial. 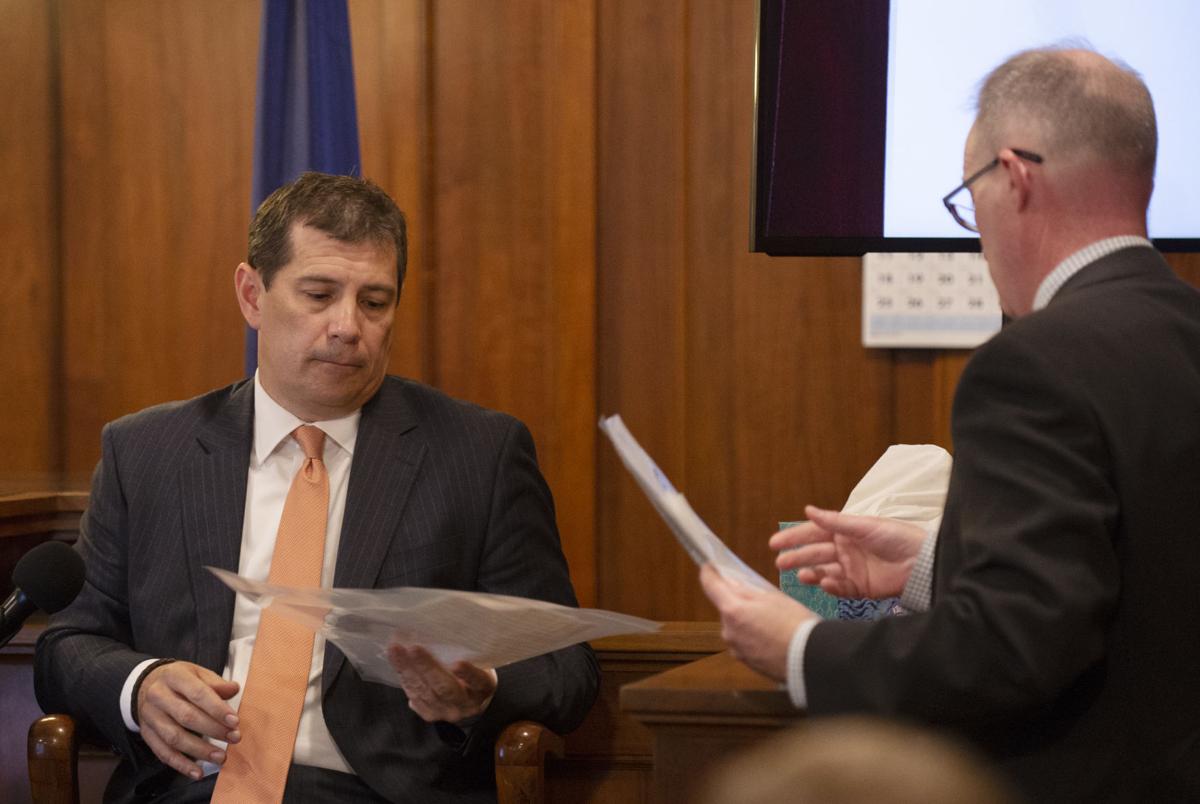 Aubrey Trail’s shadow came into view before he did.

It was noon, 12:01:37 to be exact, on Nov. 15, 2017, when he appeared in the bottom left of the surveillance camera footage taken from the entrance to the Menards in north Lincoln, where Sydney Loofe worked.

Sixteen seconds later, her blonde hair could be seen as she walked out in her blue Menards jacket. Loofe had just started her shift that day and was supposed to head out to the guard shack at the yard.

Another camera angle from inside the store showed how she came within feet of the man now on trial for her murder.

Prosecutors say Trail and Bailey Boswell killed her that night, luring the 24-year-old in through a Tinder date. Prosecutors are seeking the death penalty.

The defense says Loofe died accidentally at Trail’s hands. Then, in a moment of panic, he made the decision to dismember her to get rid of her body.

On Friday morning, the end of the second week of Trail's trial, the jury heard about jailhouse letters that Assistant Attorney General Sandra Allen mentioned in opening statements.

But defense objections, for now, kept them from being admitted into evidence and from jurors getting to see them because there were others who had access to the shared rec room where two of the letters were found.

The jailer who found a third, in a shakedown of Boswell’s cell, didn’t know if Boswell had a cellmate at the time.

It won’t be the end of the state's attempts to get the letters in. Shortly after the lunch break, they tried again, asking FBI Agent Mike Maseth if he recognized the handwriting in them. He said he did. But before he answered, the defense objected.

They argued the motion in chambers. When they returned, Saline County District Judge Vicky Johnson said she had taken the motion under advisement and they would move on to something else.

Instead, on Friday, the prosecution showed the surveillance videos at Menards.

In the second one played for the jury, taken from inside the front entrance looking out, jurors could see how closely Trail's and Loofe’s paths came to crossing.

She heads to the door to walk out just as he has walks in. They appear to be within feet of each other.

Lincoln Police Investigator Matt Franken said Trail looks over his shoulder appearing to look at Loofe twice as she heads out to the sidewalk. After the second time, Trail reaches into his pocket to make the first of three phone calls to Boswell over the next 18 minutes as she waits in the parking lot while he shopped.

Then, prosecutors played another camera angle, this time of Trail checking out.

At 12:20 p.m., as Trail walked out the exit, a plastic bag in one hand, Loofe can be seen at the top of the screen walking in the entrance.

On cross examination, defense attorney Joe Murray asked Franken if he believes it’s just coincidental that Loofe and Trail are walking in and out at the same time.

"I have no evidence either way, sir,” Franken answered.

Murray asked if Boswell’s car was on video in the parking lot the whole time Trail was inside or if he had done any investigation to rule out whether Loofe could have gone out to meet Boswell in the parking lot. He said he hadn’t.

2 arrested after hit and run investigation

The defense and prosecution, including Assistant Attorney General Mike Guinan (center right), are shown June 28 at their respective tables during Aubrey Trail's trial at the Saline County District Court in Wilber.

Defense attorney Joe Murray objects to FBI special agent Michael Maseth being asked "whose handwriting is this" on Friday during Aubrey Trail's trial.