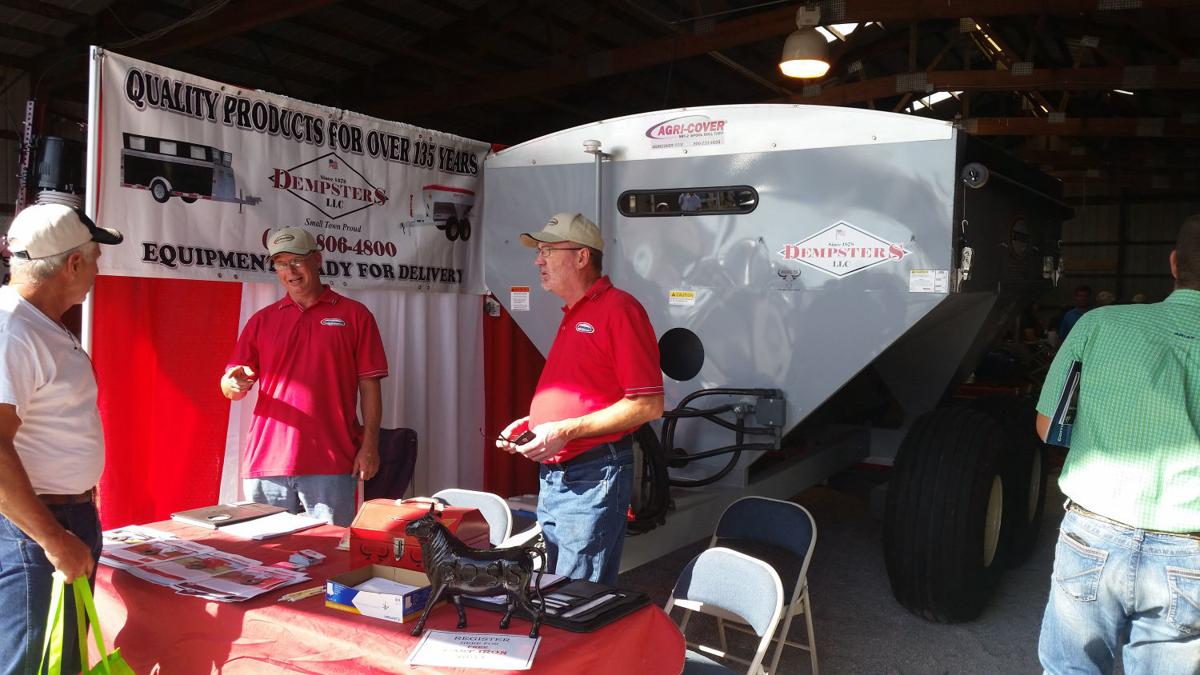 Dempsters workers speak to potential customers at Husker Harvest Days near Grand Island last year. The Beatrice company has used trade shows to get word out the name is back in business. 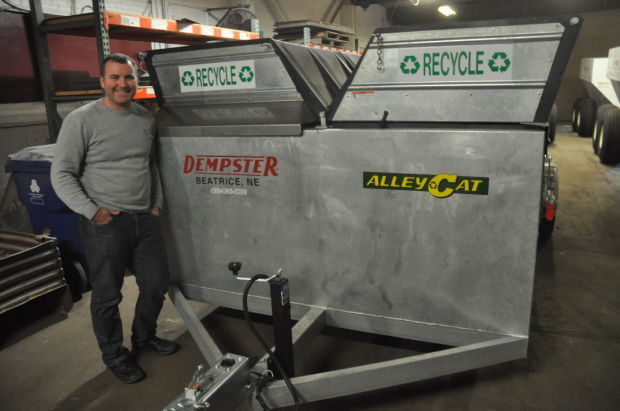 Dempsters president Ryan Mitchell poses next to a recycling trailer in November, 2014. Dempsters Manufacturing officials are currently promoting the trailers at expos and other events across the Midwest.

Dempsters is coming off multiple successful spreader runs, and the company has no intention of slowing down.

Company president Ryan Mitchell said Dempsters is preparing to begin assembly on a spring run of 30 spreaders, which have been drawing attention at trade shows nationwide.

“It’s going very well and the variable-rate system we’ve brought to shows has been doing fantastic,” he said. “We are just starting the spring line. We’ve already ordered everything, and are actually doing a number of AlleyCat recycling trailers, as well.”

While the name lives on, Dempsters LLC. is a different company operated by different people than Dempster Industries, the longtime area company no longer in operation.

Dempsters has leased space in the historic Dempsters building, though officials are considering a change in scenery. Mitchell said the building on South Sixth Street has significantly more space than needed, and is inefficient in the winter.

Dempster Industries is credited with developing a water pumping system that provided Beatrice with clean water from the Zimmerman Springs, a natural spring in the area, when the Big Blue River became too difficult to properly filter.

In 1898, the company moved to its current location at Sixth and Perkins streets. Several expansions were completed over the years and as many as 500 people were employed at the company during its peak, prompting many to locate in Gage County.

By the early 21st century, the company, which was started in 1878, had a bleak outlook.

Now under new ownership, Mitchell said getting word out the legendary spreaders are still around has proven difficult.

“It still is a challenge, but getting to all the shows has made a difference,” Mitchell said. “We appreciate the help form the city, Pinnacle Bank and the citizens for trusting and believing in us. We’re looking for great things this year and in future years.”

Dempsters has received assistance from the city of Beatrice in the form of two LB840 loans in recent years.

The City Council approved a second loan of $225,000 to Dempsters last September. The six-month loan was to assist the company with its fall run of 30 spreaders.

Mayor Stan Wirth said Dempsters’ use of LB840 funds has been a model of how the system should work.

“Dempsters has pretty much restarted a company that was failing and they concentrate now on making fertilizer spreaders and those spreaders have become quite popular,” Wirth said. “They have worked really hard on marketing their product, which is a good product that carries that Dempster name. In the equipment industry it’s really important to people because that means quality.”

Today, Dempsters no longer makes many of its own parts. Most items are purchased and assembled or welded at the Beatrice headquarters.

Local businesses are contracted whenever possible, such as Setzer Manufacturing, which powder coats Dempsters products.

The company has focused on keeping its products efficient and unique, allowing spreaders to be painted any color a customer requests, rather than only being offered in a standard version.

Another selling point for the spreaders is rust-resistant stainless steel material used for most parts, while the frame remains a mild steel.

Dempsters’ latest spreader utilizes GPS technology to map a farmer’s fields. This allows areas in need to receive more fertilizer, while less is spread in areas with adequate soil tests.

A spreader equipped with the technology will cost around $25,000, depending on the desired options.

The equipment consists of a computer box at the front of the spreader mated with a specialized gear box at the back. The setup is compatible with GPS-equipped tractors.

Dempsters spreaders also utilize wider tires to produce less impaction on the ground because of the larger contact area.

Another aspect of the new Dempsters company is the AlleyCat line of recycling trailers.

The mobile recycling bins are commonly used at campsites, fairgrounds and other outdoor areas.

A key aspect of Dempsters bins versus the competition is the use of hot-dipped galvanized steel and a UV coating on the bins that will last decades.

Trailers typically don’t sell as quickly as the spreaders, largely due to the fact that many groups and organizations that purchase the bins do so with grant funds, which often take time to secure.

A Beatrice man was taken to a hospital for medical treatment after a rollover crash Tuesday morning.

Dempsters workers speak to potential customers at Husker Harvest Days near Grand Island last year. The Beatrice company has used trade shows to get word out the name is back in business.

Dempsters president Ryan Mitchell poses next to a recycling trailer in November, 2014. Dempsters Manufacturing officials are currently promoting the trailers at expos and other events across the Midwest.