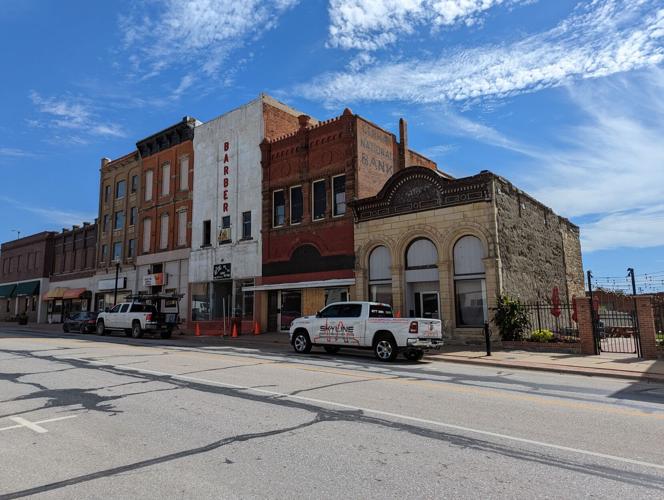 Labeled with “Barber” down the center, the building at 413 Court St. is currently being demolished. The process started in the alley. 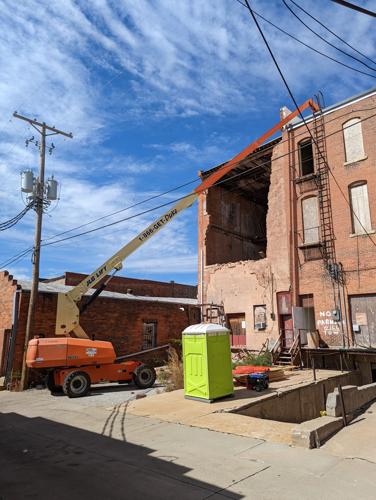 Workers demolish the alley-side of the building at 413 Court St. The building was condemned around two years ago.

Changes are underway to the landscape of downtown Beatrice as a condemned building starts to come down.

The building at 413 Court St., owned by Larry Gehring of Beatrice, has been condemned since February 2019. Workers from Skyline Construction are in the process of demolishing the building, after a change order was approved by the City Council at a previous meeting.

“The City Council approved a change order at the last meeting for around $30,000,” said City Administrator Tobias Tempelmeyer. “That would include partial demolition to the building to the west at 411 Court St., but that also does not include landfill fees.”

Before landfill fees, the cost of demolition now stands at approximately $307,000.

The demolition is beginning in the alley, and Tempelmeyer hopes the disruption will be minimal and limited to reduced traffic and parking on Court Street when that side of the building comes down. He estimated the demolition will take up to three weeks.

The city does not own the lot, and Tempelmeyer said he’s not sure what will become of the location once the demolition is complete.

Once the project is completed, the city will look to recover funds from the building’s owner from any assets he may have.

Four potential school board members participated in a candidate forum on Tuesday evening.

The Freeman Falcon volleyball team, coaches and family assembled blankets and pillows to be donated to childhood cancer patients as a service …

Two candidates hoping to be the next mayor of Beatrice shared their thoughts for the community during a candidate forum event Tuesday evening.

The Beatrice High School Drama students will present the “Little Shop of Horrors” as the fall musical at the Hevelone Center on Saturday, Sund…

Ukraine counteroffensive: Slow advances near the eastern hub of Lyman

Labeled with “Barber” down the center, the building at 413 Court St. is currently being demolished. The process started in the alley.

Workers demolish the alley-side of the building at 413 Court St. The building was condemned around two years ago.