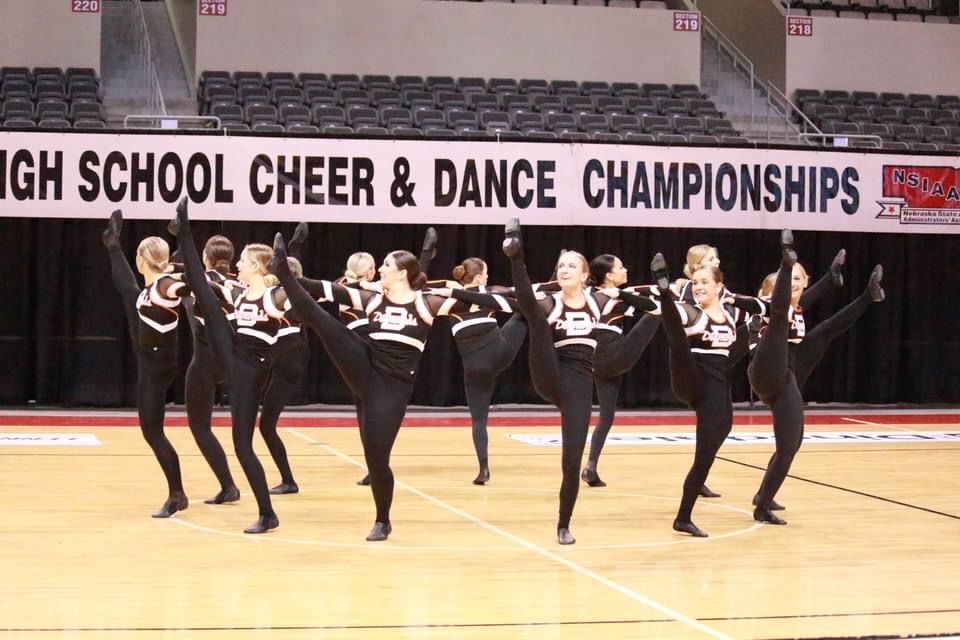 The Beatrice High School dance team participates in the Class B high kick category at state at at the Heartland Event Center in Grand Island on Thursday, Feb. 18, placing first for the first time in school history. 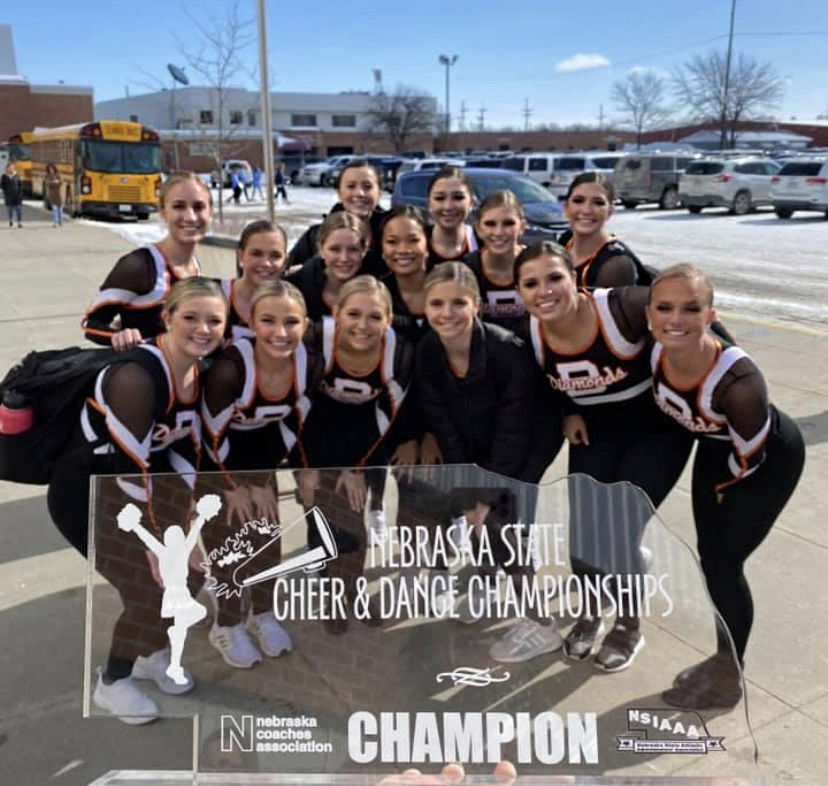 Senior Addy Timmerman said the team had been breaking their previous records each year, placing fourth in 2018 and third in 2020.

“My sophomore year we didn’t go because of weather…Then we skipped second and went straight to first,” Timmerman said. “It’s meant a lot to me as a senior to get first this year, just because it’s gotten better each and every year that we’ve gone.”

The team faced some last-minute challenges before the competition when a previous BHS cheer coach, Annette Kimmerling, came to polish the team’s routine and told them that due to new restrictions it had to be under two minutes. The dance team then had to cut out about 15 seconds of their routine the weekend before the competition on Thursday, Feb. 18.

“But it came out better for the whole team,” Timmerman said. “It was a lot cleaner. I personally was kind of nervous for our routine until that Saturday. It was a whole new world after that practice. We had a whole new confidence as a team together.”

Senior Jasmin Schroeder said she was amazed when Beatrice won. She’s been on the team for two years after moving from Scottsbluff and being on their dance team.

“Later on in the day, they congratulated us and said that we did a very good job and we earned it,” Schroeder said about her former teammates.

Timmerman said the dance team has been running as usual this year, other than wearing masks at practices and when sidelining games.

Coach Missy Timmerman said they weren’t able to go to Universal Dance Association’s sponsored summer camp at Nebraska Wesleyan University to choreograph their routine, so they did it at the high school instead.

“I really, truly feel that this group of girls is the definition of teamwork,” Timmerman said. “They have worked hard all year. There has never once been a negative attitude, and they’ve come together to support each other for a common goal. It has been a pure joy watching them grow as a team, to be able to go out there and perform a clean routine that other schools noted.”

Addy Timmerman noted her mom’s and Kimmerling’s work for helping the team get this achievement.

“She didn’t really have a lot of dance background besides being a dance mom at my dance competitions, but she knows how to have people come together and make a positive environment for people to be in,” Timmerman said. “She works at a preschool with three and four year olds all day, she has to be a positive person. And I think her positive-ness has spread towards us, and she really taught us how to be a team and work together, and how to deal with life issues, not only dance issues, and how to be a team…Our dances have been so much better, and I think we’re more involved in the community and in the student body too. It’s just awesome.”

Schroeder said she’d encourage any student to try out for the dance team, regardless of what grade they’re in.

“It has been such a great group of girls,” Schroeder said. “Just moving here, it’s like a family, and they’re always there for you. It’s a really good, positive team.”

Are aliens not coming to Earth because of the cost?

Are aliens not coming to Earth because of the cost?

What is that mysterious 'blinking' object in space?

What is that mysterious 'blinking' object in space?

Get our local education coverage delivered directly to your inbox.

Since the COVID-19 pandemic has caused restrictions on large gatherings, many schools have started live streaming sports and activities.

For possibly the first time in Beatrice High School history, three female athletes have taken to the mat and joined the school’s wrestling team.

As Gage County’s COVID-19 risk dial continues to lower, Beatrice Public School parents are wondering when and if the district will re-instate …

With the pandemic and everything else happening around the world, it’s been challenging for students to have a typical school experience.

Students at the Beatrice campus of Southeast Community College had to adjust to a big change this semester, as they started classes in the new…

In a time where food, shelter and other donations are in high demand, a necessity that may be overlooked are those smaller, personal care item…

A long-time board member for Beatrice Public Schools, Steve Winter, passed away on Monday, Feb. 22 at Bryan East Hospital of Lincoln at the ag…

A new local partner with Beatrice Public Schools, the Nebraska Foundation for Children’s Vision and the Nebraska Optometric Association are he…

During such a dispirited time in the nation’s history, a group of high school athletes have been working hard to keep the community cheerful a…

Students at Saint Paul’s Lutheran School in Beatrice are creatively serving the community, especially this week as part of their National Luth…

It was a “Wacky Wednesday” and other weekdays for Beatrice preschool and elementary students, as they participate in Dr. Seuss-related activit…

After months of discussions and anticipation, on Friday, roughly 225 people or 60% of Beatrice Public School staff were given the COVID-19 vaccine.

A new group has been organized at Lewiston Consolidated Schools, thanks in large part to the work of one student.

The Beatrice High School dance team participates in the Class B high kick category at state at at the Heartland Event Center in Grand Island on Thursday, Feb. 18, placing first for the first time in school history.