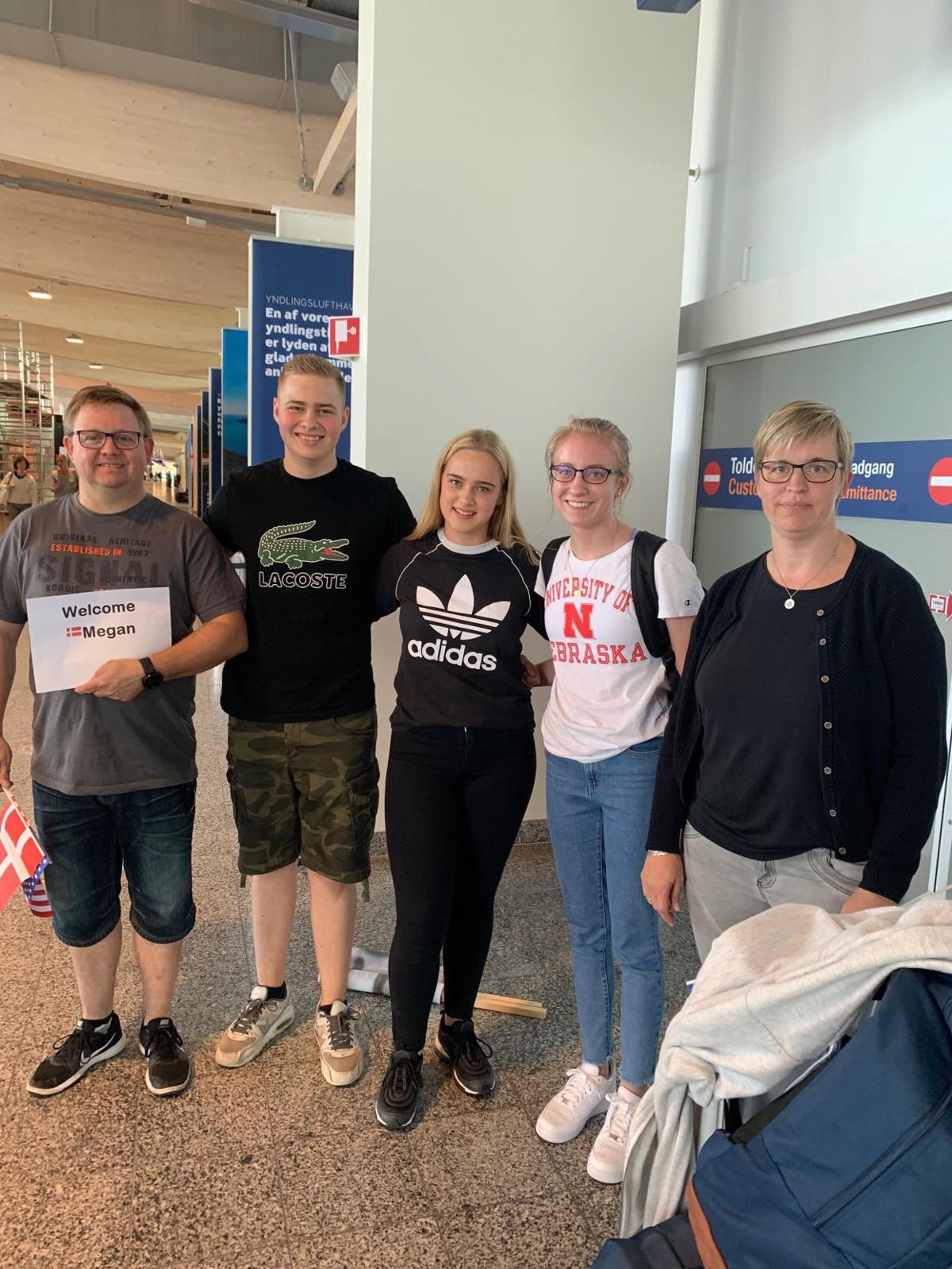 Beatrice High School junior Megan Hoffman is greeted by her host family, the Pedersens, as she starts her year as an exchange student in Denmark. Hoffman is the first BHS student to study internationally while in high school. From left to right: Lone Pedersen, Mads Pedersen, Marikka Pedersen, Megan Hoffman and René Pedersen. 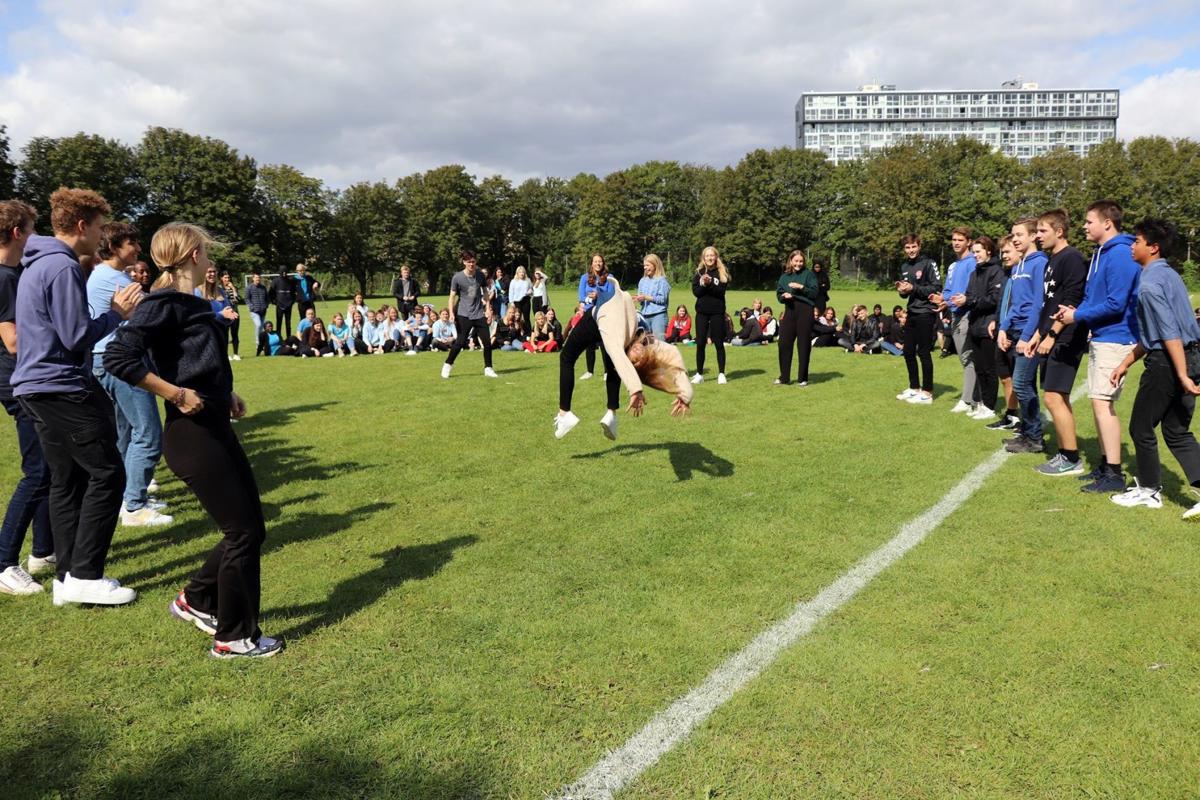 Hoffman shows off her tumbling skills during an assembly at her new school. Hoffman worked with the BHS administration so she earns the credits to graduate on time with the class of 2021.

Orangemen pride goes international this year as Beatrice High School junior Megan Hoffman spends the next 10 months studying in Denmark. Hoffman is the first BHS student to study internationally while in high school.

“I wasn't entirely sure what to expect, but all the administration and students from my school have been very supportive and helpful towards me taking this step,” Hoffman said.

Hoffman said she got the idea to study abroad after her family hosted two foreign exchange students: one from Switzerland and the other from Denmark.

She worked closely with the BHS administration to make sure she earned the credits to graduate along with the class of 2021, and Hoffman arrived in Denmark on Aug. 14.

Denmark was Hoffman’s first choice for studying because she finds the Danish language interesting and wanted to learn.

“I think an exchange year is truly the best way to do that, because you are constantly immersed by the language in school,” Hoffman said. “Staying with a host family here also helps you experience the different culture, rather than just observing it by, say, taking a trip to the country.”

Hoffman said her host family, the Pedersens, have been great so far welcoming her and helping her adjust to the new culture.

Kendra Hoffman, Megan’s mother, said it’s been wonderful to be a host mother, but that sending her daughter to live with another family is obviously a different experience.

“Of course it’s hard having her gone for so long, but modern technology lets us stay in touch and know how she is doing,” Kendra said. “ Her host family in Denmark has been wonderful about keeping us informed and sending pictures.”

Hoffman said misses her friends, family and school back home, as well as being able to speak English.

“Everybody understands English here, but I have to simplify my words,” Hoffman said. “Plus my school obviously teaches in Danish, so my brain is always tired.  Surprisingly though, I can already understand a lot.”

Hoffman said the only similarities between her new school and BHS is her math, science and English classes.

“School here is also very different, but I like it a lot,” Hoffman said. “There are 1,100 people at my school, which is much more than BHS. Here I am taking 14 classes, and normally at home I would only have eight. The classes are interesting, though, so it's fun for me.”

Hoffman said Denmark is different from Nebraska, as well, as it rains every day and the buildings are smaller. Hoffman also noticed Denmark ranked as one of the happiest countries in the world (Forbes ranked in No. 2 in 2019) and reports that everyone has been kind to her.

Hoffman will return to Beatrice sometime in June, and aims to be proficient in Danish and bring some of the culture back with her. She also has plans to meet up with the Denmark student her family previously hosted.

“I also hope to meet many other exchange students while here,” Hoffman said. “I have already met lots. Learning about them and their country is very interesting.”

Hoffman said she is unsure what she wants to study in college, but would be open to studying abroad again if the opportunity presented itself.

BHS Principal Jason Sutter said the school is supportive of Hoffman’s trip, and believes it’s an opportunity other BHS students could take advantage of in the future.

“We’re excited for Megan to return and learn about her experiences,” Sutter said.

“We are so proud of Megan, and admire her courage and determination to do an exchange year,” Kendra said. “We miss her very much, but we know this is the experience of a lifetime for her!”

Roughly 50 students entered the House of Orange on Tuesday to spend their morning marching and pretending to play instruments.

Traveling through Europe could be as a dream for many. For one Beatrice High School Student, it was reality.

After 16 years of working as a science teacher at Beatrice High School, Joan Christen will retire at the end of the school year.

Beatrice High School students were recognized during a Board of Education meeting for being named academic all-state recipients.

Roughly 150 Beatrice High School alumnus gathered over the weekend to catch up with old friends and watch some Nebraska Cornhuskers football.

On Monday afternoon, Beatrice and Southern High School students gathered in the O-Zone to watch professional BMX riders from the X Games perfo…

The Hevelone Center for Performing Arts has transformed into a creepy, kooky, mysterious and spooky house with a cemetery as a front yard to s…

Beatrice High School junior Megan Hoffman is greeted by her host family, the Pedersens, as she starts her year as an exchange student in Denmark. Hoffman is the first BHS student to study internationally while in high school. From left to right: Lone Pedersen, Mads Pedersen, Marikka Pedersen, Megan Hoffman and René Pedersen.

Hoffman shows off her tumbling skills during an assembly at her new school. Hoffman worked with the BHS administration so she earns the credits to graduate on time with the class of 2021.