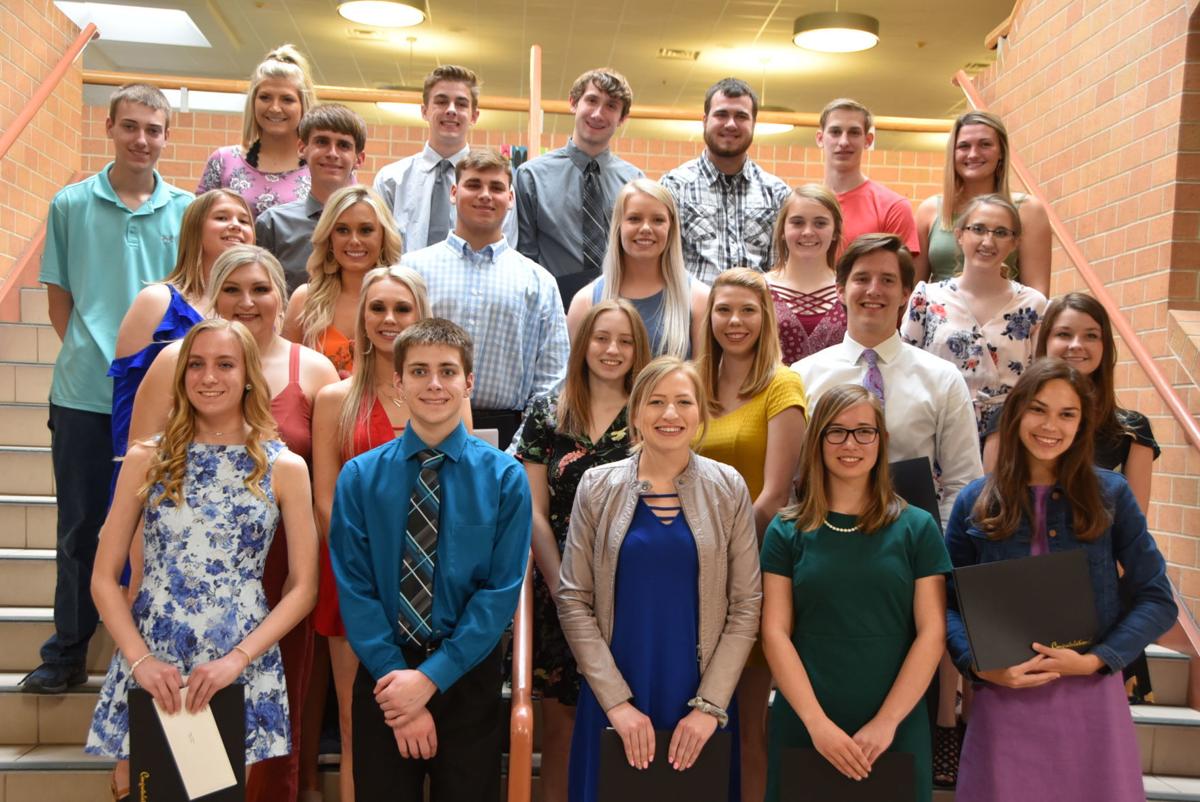 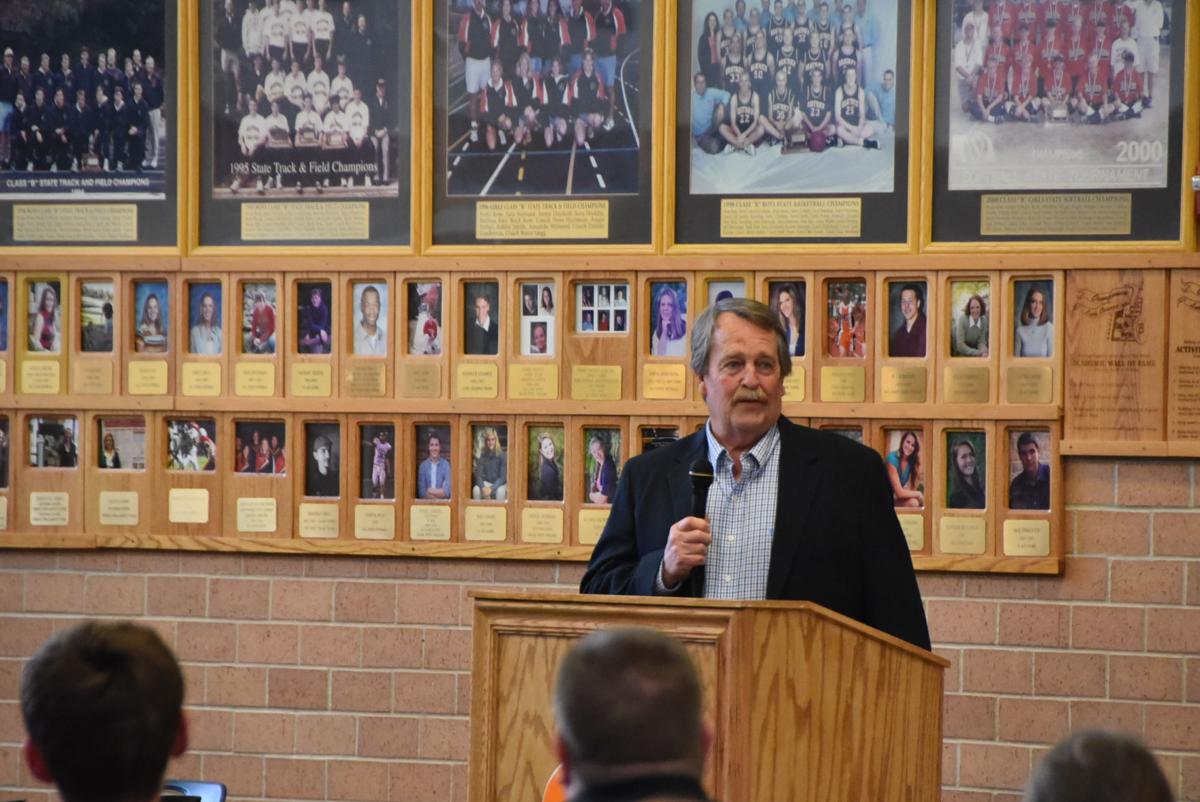 William Armstrong, a Beatrice High School graduate of 1972, was given the 2019 Hall of Fame award by the Beatrice Educational Foundation for his work with children's sports throughout the community. 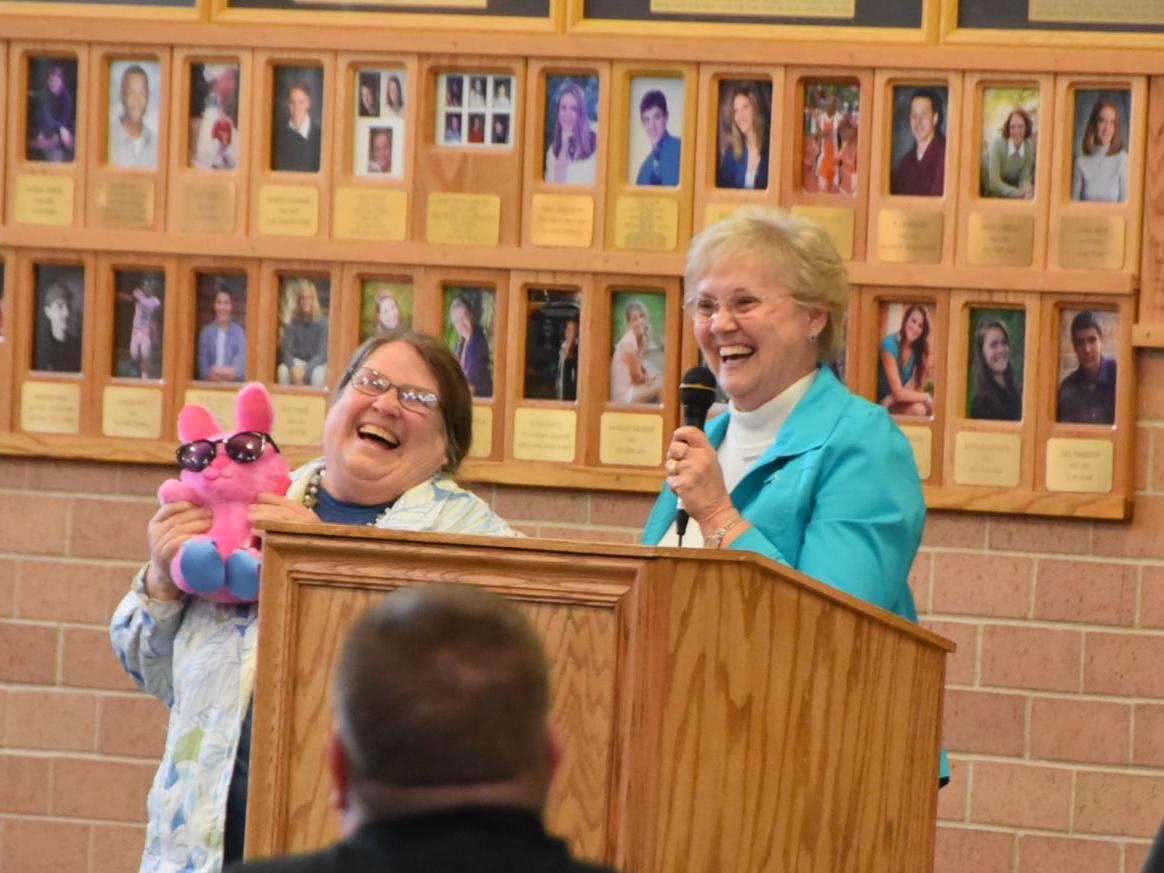 Laureen Riedesel, the director of the Beatrice Public Library, laughs after being given an Energizer Bunny. The bunny symbolizes Reidesel's untiring energy and enthusiasm for educating students and the community, as she was awarded the 2019 Friend of Education award by the Beatrice Educational Foundation.

A Hall of Fame award was given to William Armstrong, who graduated from Beatrice High School in 1972.

In high school, Armstrong participated in football, basketball and track, and was rewarded the Roger Woods Memorial trophy his senior year. Since graduating from the University of Nebraska-Lincoln in 1976, Armstrong returned to Beatrice, where he has spent two terms as the BHS Athletic Booster Club president, St. Paul Board of Education president and served on the YMCA, Nitro Soccer Club and YRI board of directors, among other things.

Armstrong said he felt privileged to be recognized as part of the other members who have received the award.

“But enough of what I’ve done,” Armstrong said. “We’re here today to celebrate you seniors. You’ve done a great job, and are just beginning. You’re leaving Beatrice and going out in the world, and you are going to do great things.”

Armstrong reminded students that they are always welcome in Beatrice.

“There’s something here in Beatrice that is worth coming back to,” Armstrong said.

The foundation also gave a Friend of Education award to Laureen Riedesel, along with a stuffed animal dressed like the Energizer Bunny to symbolize her untiring energy and enthusiasm for educating students and the community.

Riedesel has been the director of the Beatrice Public Library since 1977, and has helped numerous students with research and composition projects, and has held several events to honor Beatrice citizens. Two of which – Robert Taylor and Weldon Kees – were BHS graduates.

Riedesel said she didn’t think she was even eligible for the award.

“Beatrice high school has incredible, incredible graduates,” she said. “You know that. Just look around. I’m so impressed with what Beatrice High School has accomplished over the years, with these incredible people who stay here, and also go out into the world and share the values and education they got in Beatrice.”

Riedesel said she is thankful for the amount of support the community has given library has gotten over the years. She explained that she moved around a lot growing up, and her goal was to move somewhere and get to know multiple generations of people.

“I’ve gotten to do that in Beatrice,” Riedesel said. “I heard some of the names of people that some of you receiving those scholarships don’t know. But I’ll tell you, they were wonderful. They would be so proud of you, and I am so proud.”

A full list of BHS scholarships will appear in a future edition of the Daily Sun.

Roughly 79% of students at Beatrice Community Preschool have met the age-level expectancy for social and emotional growth with problem solving.

"The record shows that the college arguably turned a blind eye to nonconsensual sexual encounters," the judge said.

Superintendent recognizes board of education

This week is School Board Recognition Week in Nebraska, so during a board of education meeting Monday night superintendent Jason Alexander ack…

The community was able to view paintings, ceramics and sculptures at Diller-Odell High School on Thursday, as students from several area schoo…

It may be surprising that a rural school in Nebraska has no agriculture program or FFA group. That was the case for Southern High School in Wy…

William Armstrong, a Beatrice High School graduate of 1972, was given the 2019 Hall of Fame award by the Beatrice Educational Foundation for his work with children's sports throughout the community.

Laureen Riedesel, the director of the Beatrice Public Library, laughs after being given an Energizer Bunny. The bunny symbolizes Reidesel's untiring energy and enthusiasm for educating students and the community, as she was awarded the 2019 Friend of Education award by the Beatrice Educational Foundation.