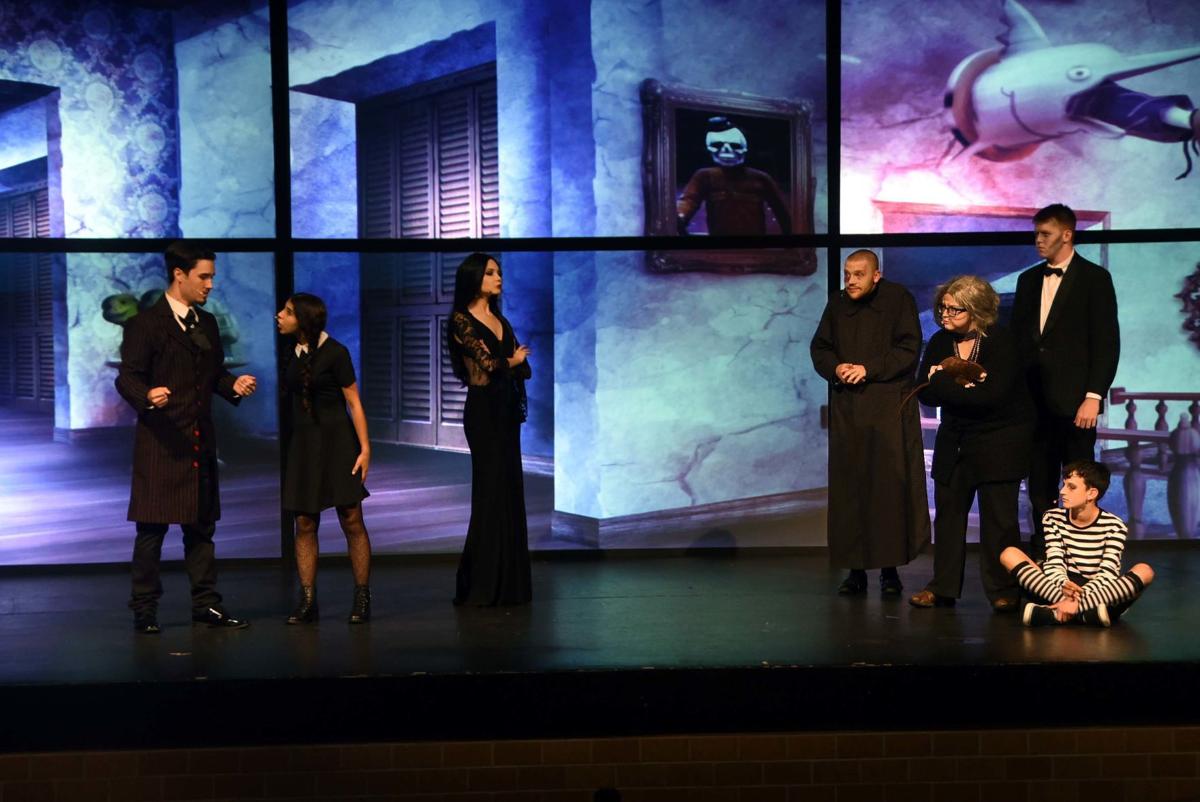 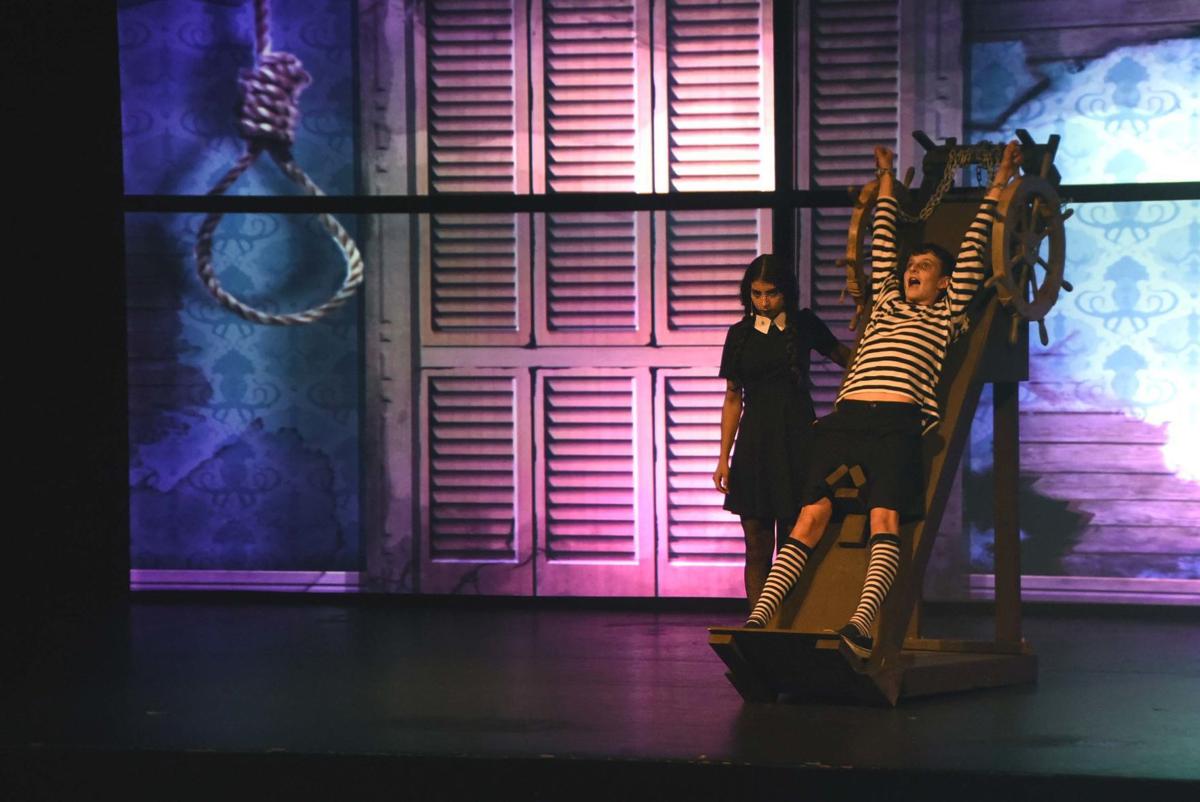 Rowe's Wednesday does her usual torture to Scheele's Pugsley while talking about her new affinity for puppies, unicorns and sunshine. In lieu of large set backgrounds, the BHS theater is trying six screens that shift to different areas of the Addams household. 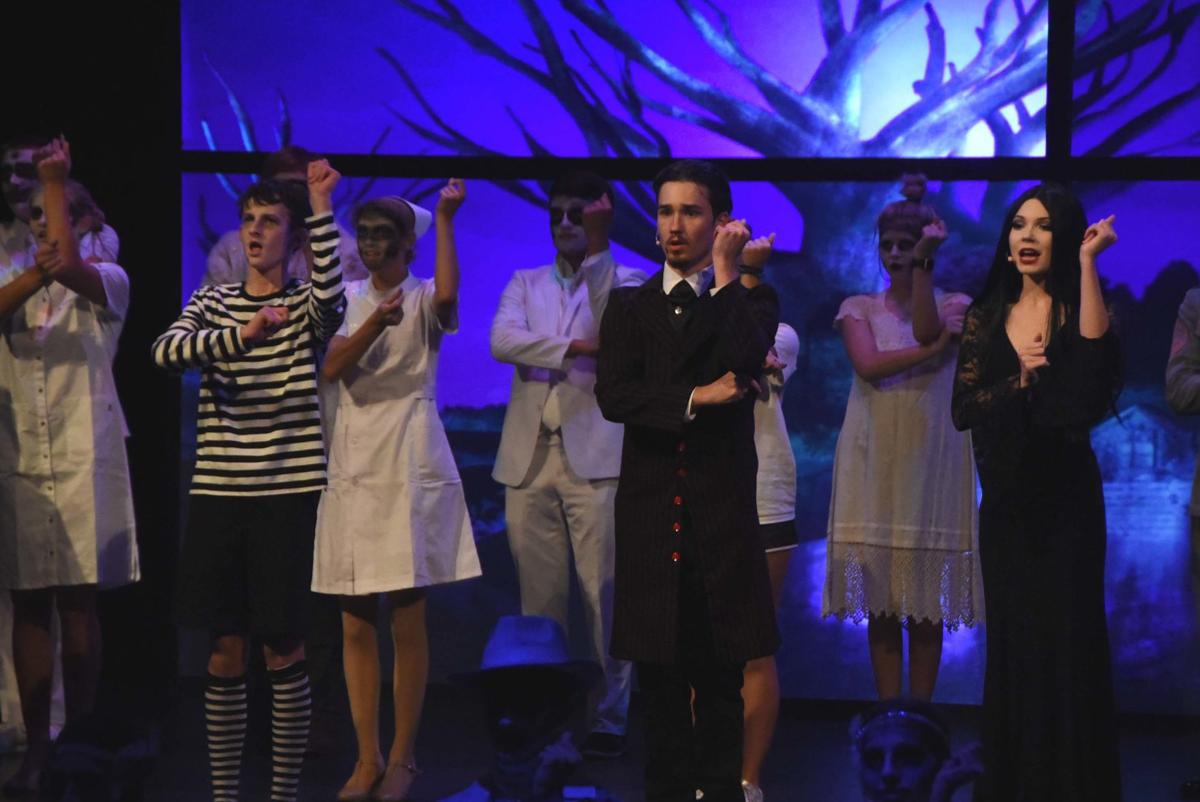 In typical Addams manor, Scheele, Price and Kassmeier participate in a cemetery dance to wake their dead relatives. Tickets for the show are $5 for students and $10 for adults, and runs Saturday, Sept. 28 at 1p.m., Sunday, Sept. 29 at 2:30p.m., Monday, Sept. 30 at 7p.m.

The Hevelone Center for Performing Arts has transformed into a creepy, kooky, mysterious and spooky house with a cemetery as a front yard to suit the altogether ooky Addams Family.

The dark and macabre Wednesday has grown up and fallen in love with Lucas Beineke, who is as un-Addams as possible.

Wednesday tells her father, Gomez, to keep her engagement a secret from her mother, Morticia. After inviting the Beinekes over for dinner, secrets are disclosed, relationships are tested and ghostly ancestors run amok.

Roughly 80 students are involved with the production this year.

Playing the suave, sword fighting patriarch is senior Matt Price, who previously played Cogsworth in "Beauty and the Beast."

“It’s kind of a treat,” Price said. “Gomez is really sure of himself and very confident with everything he does. That was interesting to get used to, because there are a lot of things that I’m very uncertain of that I do. It’s definitely challenging.”

The poised, gothic matriarch is played by senior Hannah Kassmeier, who was previously Miss Hannigan in "Annie."

“She demands attention,” Kassmeier said. “Basically, if you don’t know her character she very cold, she’s very sure of herself and she wants to make sure things go her way. If it doesn’t go her way, then it’s not going to happen. In the show, things happen that she doesn’t like, so that causes trouble.”

BHS Choir Director Kelly Meyer said they wanted to a more nontraditional and recent show, and thought the students would fit the roles well.

Price said The Addams Family is very different from their previous shows.

“It’s definitely more of a comedy,” Price said. “With ‘Beauty and the Beast,’ it has some funny moments in it, but its main pull isn’t its humor. I’d say the same thing for ‘Annie.’ This one’s main pull is the fact that it’s very, very funny.”

Kassmeier said people are going to leave the show saying “what just happened?”

“So many cool things happen at once that you just have to sit back and take it all in to even comprehend it,” Kassmeier said.

The show also brings a peculiar addition to the Hevelone stage: six large, rented screens that show the various locations of the Addams household and help bring their dead (or undecided) relatives to life.

Meyer said the visuals were put together by parent volunteers, and is something they’re trying to save the challenge of building a set.

“I think it’s very, very cool,” Price said. “Something new and exciting that hopefully takes off, either here or just anywhere, because you can do so much with it.”

“I don’t think we even understand as actors how cool this is, because we can’t see it…Everyone that critiques us says it just adds another level to our show,” Kassmeier said.

Both students had kind things to say looking back at their experiences in the Hevelone.

“It’s helped me become much more confident in myself,” Price said. “I used to be a really quiet kid, really shy, and didn’t like to talk in front of people. With acting, I’ve found something that I really enjoy and I get to talk to people who are just like me. I get to find almost a second family in this place.”

“The whole music program at Beatrice, we really are just one big family,” Kassmeier said. “It just gives you the easiest connection with hundreds of people.”

BHS to perform "The Secret Garden"

As more than 550 fourth graders from Gage County and surrounding schools exited their buses this week, they entered a pioneer world of shellin…

Despite the snow Monday evening, Beatrice High School students sung "It's a Beautiful Day," "Blue Skies" and other songs during their fall cho…

The Beatrice Public School district is looking at a roughly $168,000 technology budget, a 47% decrease from the previous budget. The decrease …

When no one wants to publish Alina Deveraux’s 2,701-paged memoir chronicling everything including scraping her knee as a child, the author dec…

Beatrice Public Schools students’ overall performance on state testing in the 2018-2019 was at or slightly below the state averages, according…

Sunday marks the first day of December, and the Homestead Harmonizers are preparing the community to celebrate "The Reason for the Season."

Rowe's Wednesday does her usual torture to Scheele's Pugsley while talking about her new affinity for puppies, unicorns and sunshine. In lieu of large set backgrounds, the BHS theater is trying six screens that shift to different areas of the Addams household.

In typical Addams manor, Scheele, Price and Kassmeier participate in a cemetery dance to wake their dead relatives. Tickets for the show are $5 for students and $10 for adults, and runs Saturday, Sept. 28 at 1p.m., Sunday, Sept. 29 at 2:30p.m., Monday, Sept. 30 at 7p.m.