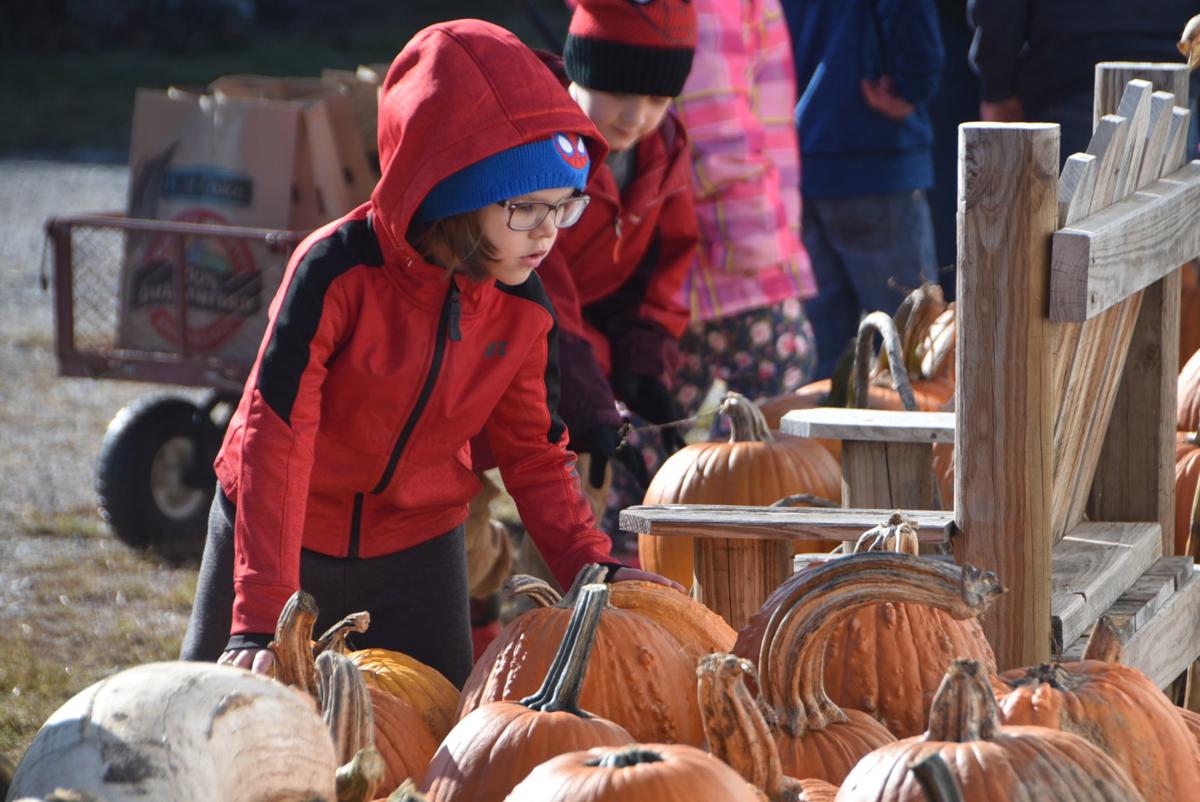 Philip Fisher and Connly Klaus choose pumpkins at the Korner Pumpkin Patch on Wednesday. Kindergartners from Lincoln Elementary visited the pumpkin patch to learn about the growing stages and harvesting process. 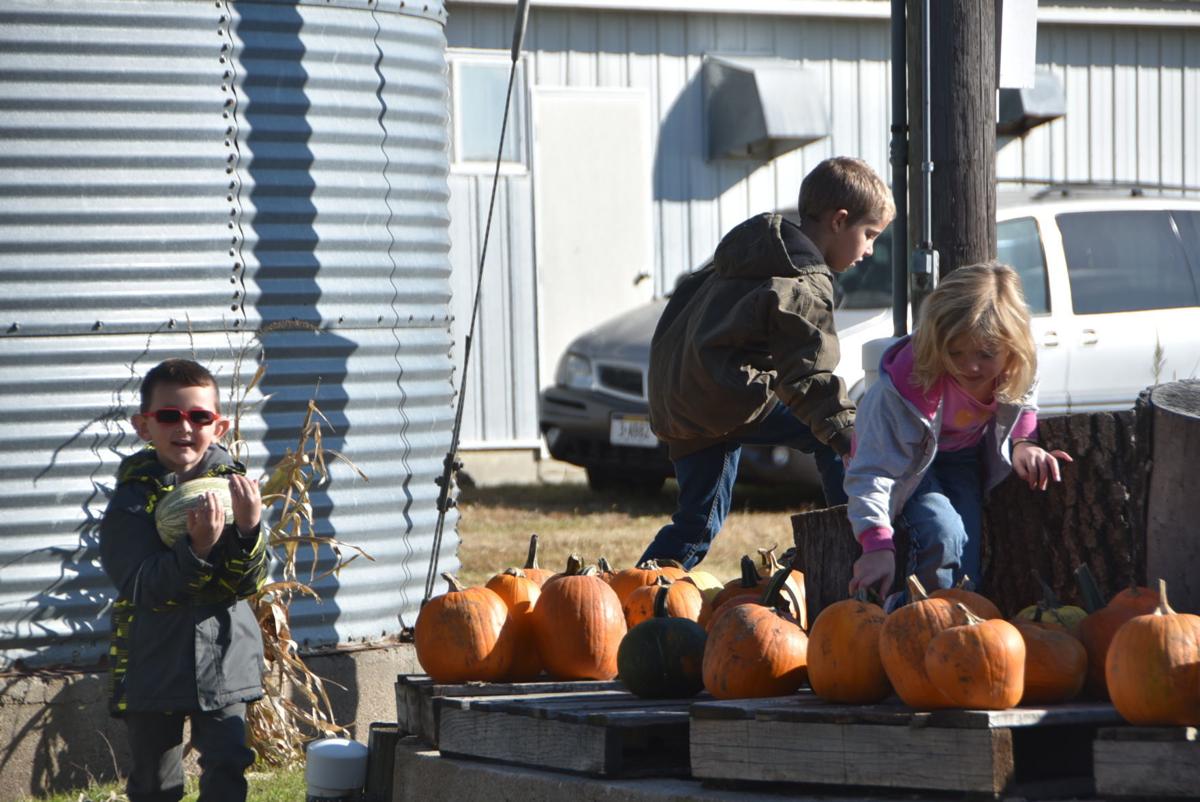 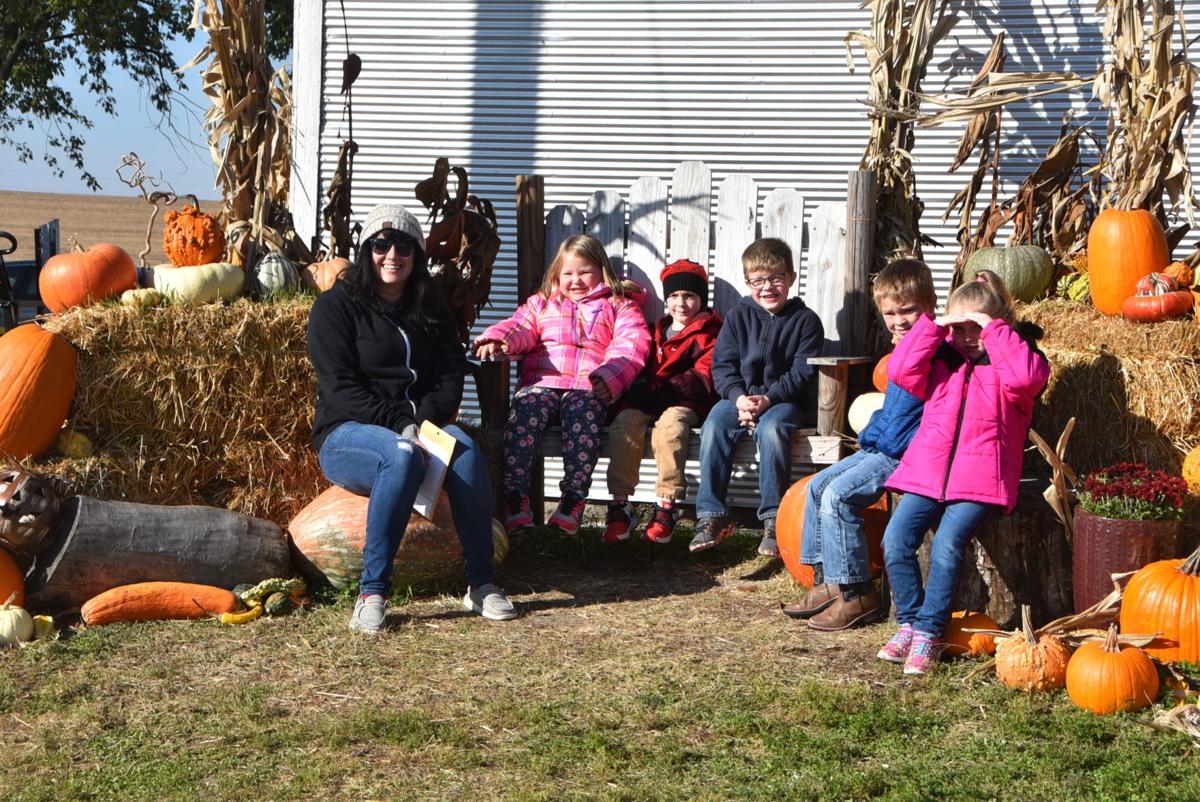 Students decorated their own paper bags for the occasion and picked pumpkins from green to orange, warty and smooth, round, ovular and shapes in between.

The patch itself is a family run business that started when Lynette Jurgens sold vegetables from her garden at the end of her driveway. Her brother, Don Jobman, drove by and noticed how much she was selling.

That later grew into selling squash, Indian corn, straw bales, corn stalks and Halloween-themed cookies, Rice Krispy Treats and caramel apples made by Jobman’s wife, Malinda. There’s also a swimming pool full of corn and toys for the kids to play with and fall displays that change every year made by Jobman’s kids, Jill Jobman and Joni Schwab.

The patch has been open for 16 years, the field trip being a tradition of area schools for the last several.

The students learned about the growing stages of a pumpkin, guessed how many seeds would be inside and talked about what foods can be made from pumpkins.

“We usually try to have a vine for them that they can see, except for this year they’ve already frozen so there’s not too much to see,” said Jill Jobman.

The students worked in groups to do a scavenger hunt around the patch, while also looking for their perfect pumpkins.

The field trip ended students getting pumpkin cookies from the Korner Pumpkin Patch family, which are fondly referred to as First Grade Pumpkin Cookies.

“The Freeman first graders were the first group to come on field trips,” Jobman said. “When the kids were little they just called them First Grade Pumpkin Cookies, so they’ve always just been called [that].”

As for groups or schools wanting to attend the pumpkin patch together, Jobman said to reach out by message through the Korner Pumpkin Patch Facebook page, or by calling 402-223-5050.

The Korner Pumpkin Patch is located at 6696 East Highway 136 and is open through Halloween. Their hours are Monday-Friday 4-7p.m., Saturday 10a.m.-6p.m. and Sunday 12-6p.m. It is cash or check only, and prices are noted by different colors and are determined by size and uniqueness.

BHS students attend Board of Education meeting in Hevelone Center

The Beatrice board of education’s monthly meeting saw one of its largest audiences ever on Tuesday, as high school students enrolled in Americ…

Southeast Nebraska area school districts received a "good" ranking or above for the 2018-2019 school year, according to the latest Nebraska Ed…

As more than 550 fourth graders from Gage County and surrounding schools exited their buses this week, they entered a pioneer world of shellin…

The Hevelone Center for Performing Arts has transformed into a creepy, kooky, mysterious and spooky house with a cemetery as a front yard to s…

FAIRBURY -- Students from Central Elementary in Fairbury will have a new playground to enjoy, thanks to a $25,000 grant from Exmark in Beatrice.

BHS students see Broadway performance of 'Phantom of the Opera'

Philip Fisher and Connly Klaus choose pumpkins at the Korner Pumpkin Patch on Wednesday. Kindergartners from Lincoln Elementary visited the pumpkin patch to learn about the growing stages and harvesting process.