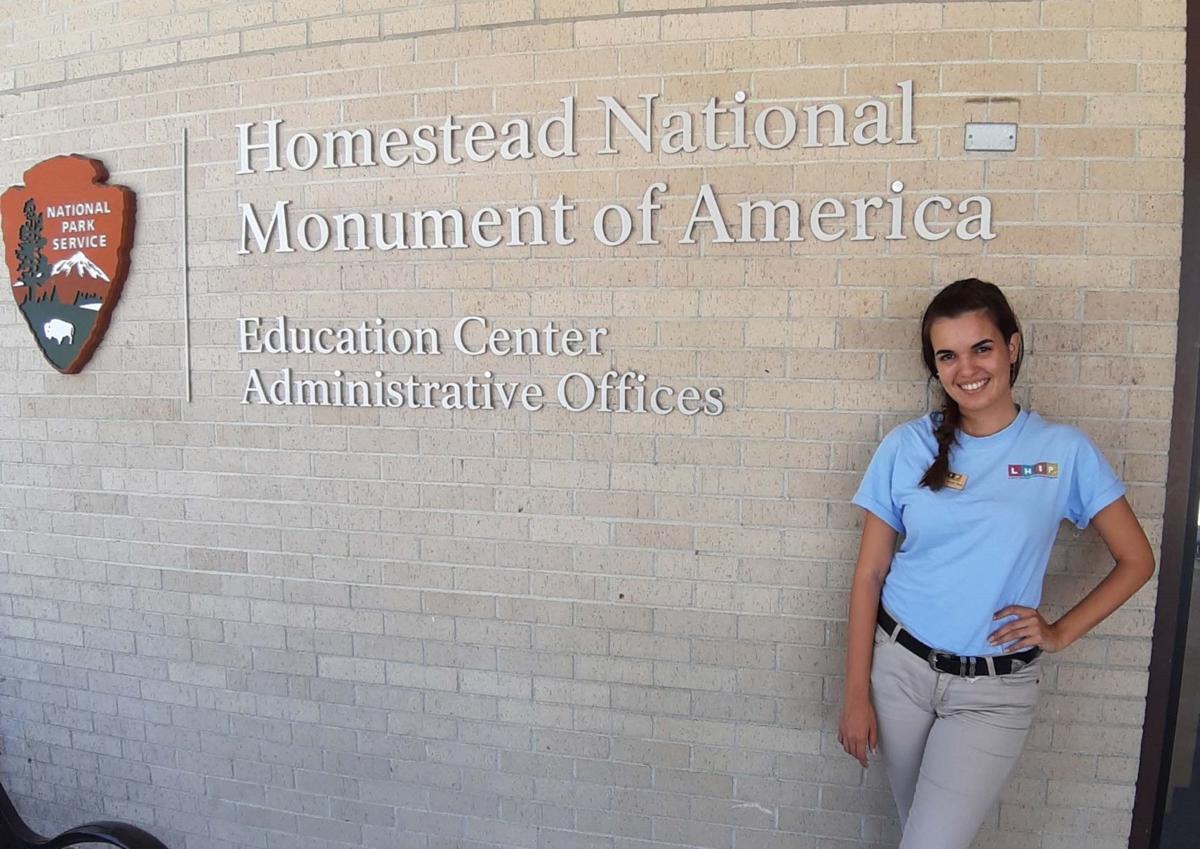 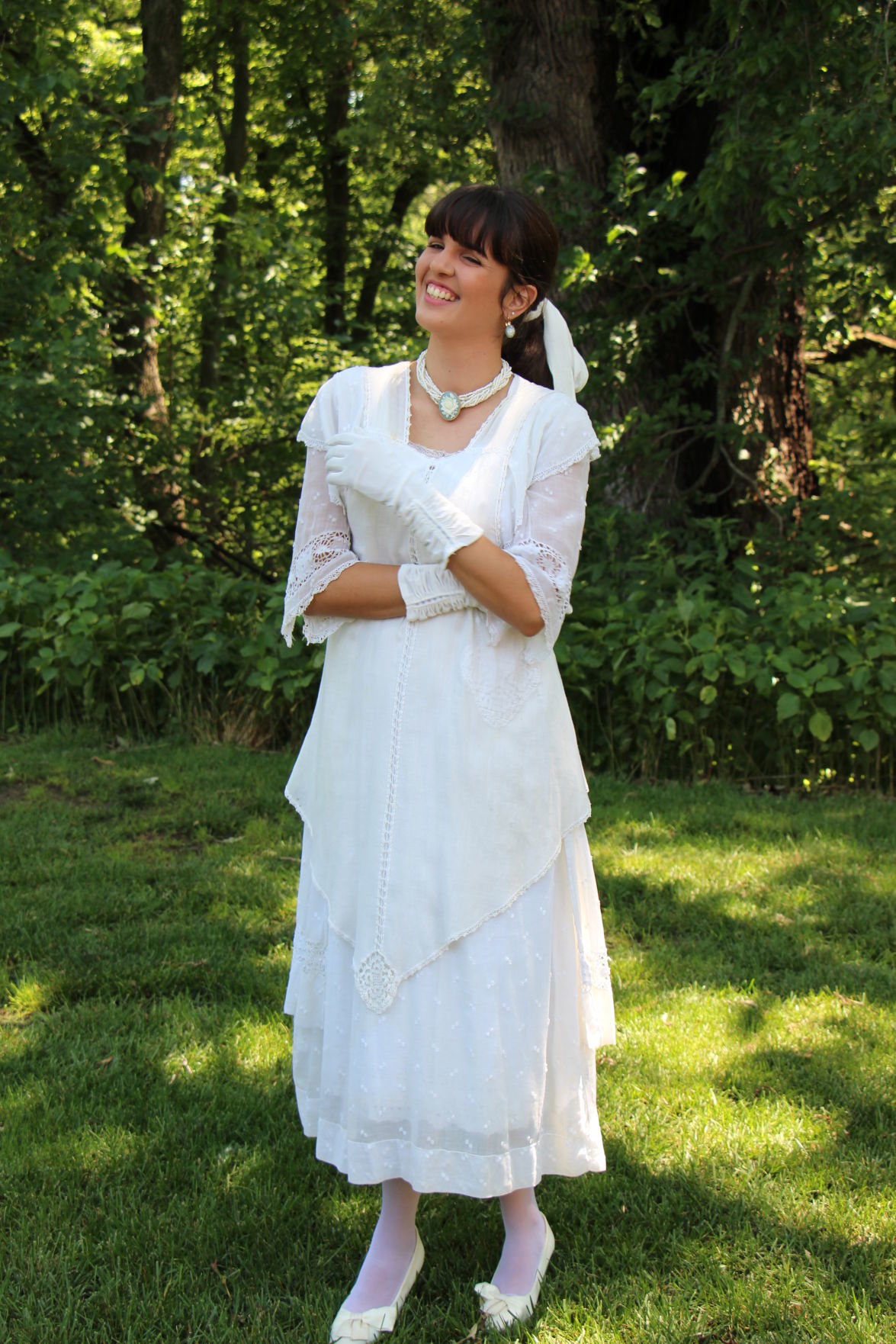 Barreto Rosa wears a homestead-era summer dress from 1916 as part of the park's Homestead Days activities. The bulk of her internship involved researching the history of Latino homesteaders in America.

Homestead National Monument’s newest intern traveled over 2,500 miles in order to research the history of Latino homesteaders in America.

Veronica Barreto Rosa is a journalism and modern languages student at the University of Puerto Rico in Río Piedras.

When she received an email about the Latino Heritage Internship Program, which had opportunities to participate in different Latino projects for the National Parks Service, Barreto Rosa decided to apply.

Barreto Rosa had previously visited Florida and New York, but Beatrice was her first experience of the Midwest.

“When I first came here, I was like ‘it’s green! It reminds me of home,’” Barreto Rosa said. “People here are the nicest people I’ve met in my life. They’ve been very welcoming, taking care of me and what I need. I really appreciate how people are here.”

Barreto Rosa said she did not know much about homesteading before starting her internship.

“When they told me I had to do research on Latina Homesteaders, I was like ‘what do Latina have to do with Homesteading?’” Barreto Rosa said. “I thought I might find some Latinas, but there are not going to be a lot of them.”

She noticed that many homesteaders originally emigrated from Europe. However, in Arizona in 1913 alone, Barreto Rosa found that 10 percent of homestead claims were made by people with Hispanic last names, which is more than she predicted.

“She said she remembers her nana telling her that when [Native Americans] used to come to the Lopez house, they would make burritos for them, they would make sweet bread for them and it was a peaceful friendship between them,” Barreto Rosa said.

Barreto Rosa chronicled parts of her Homestead experience through her internship program.

One article focused on Homestead Days, which Barreto Rosa said was one of her favorite activities.

“When the staff was planning a fashion show about the Homestead Era clothes, I could not resist and offered myself to be a model,” Barreto Rosa said. “I had the opportunity to dress myself in a white summer dress originally from 1916. I felt gorgeous.”

She also compiled a research video of her findings, which she presented at Homestead on Thursday, as well as recorded biographies of the homesteaders she found, which the park could use in future events.

Barreto Rosa said that while she doesn’t know whether she’ll work with national parks in the future, the internship helped solidify her interest in research.

This was the last week of Barreto Rosa’s internship before she travels back to Puerto Rico for her last semester of school.

“There’s no good news in the paper.”

Man’s best friend may be dogs, but a farmer’s best friend is arguably bats. And a spreading fungal disease affecting bats may cost the agricul…

In celebration of Constitution Day, roughly 28 people from 18 countries became United States citizens during a naturalization ceremony at the …

Attendees at the Homestead National Monument’s heritage center saw a particularly bright and unique occurrence on Thursday, as roughly 35 acre…

After roughly a decade since it was first discussed, United States Representatives considered changing the name of the Homestead National Monu…

After nearly 20 years of researching and sharing the history of southern Gage County, Jan Morris was named a recipient of the 2019 Heritage He…

A piece of art created in Beatrice and displayed in the United States Capitol building has been restored and brought back to the Sunland, wher…

After several months without a chief park ranger, Homestead National Monument of America introduced a new supervisory park ranger this week, A…

Barreto Rosa wears a homestead-era summer dress from 1916 as part of the park's Homestead Days activities. The bulk of her internship involved researching the history of Latino homesteaders in America.