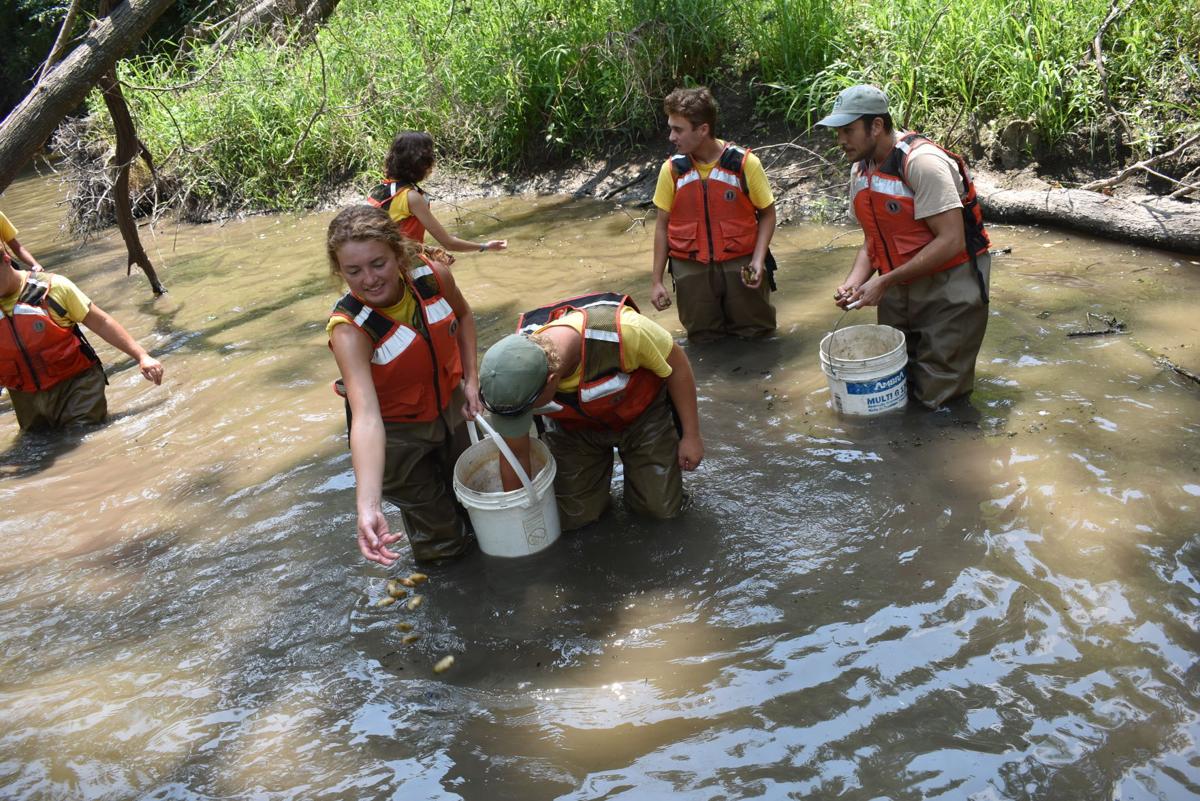 Members of the Youth Conservation Corps distribute mussels into Cub Creek Tuesday. A total of 950 mussels were distributed near Homestead National Historical Park. 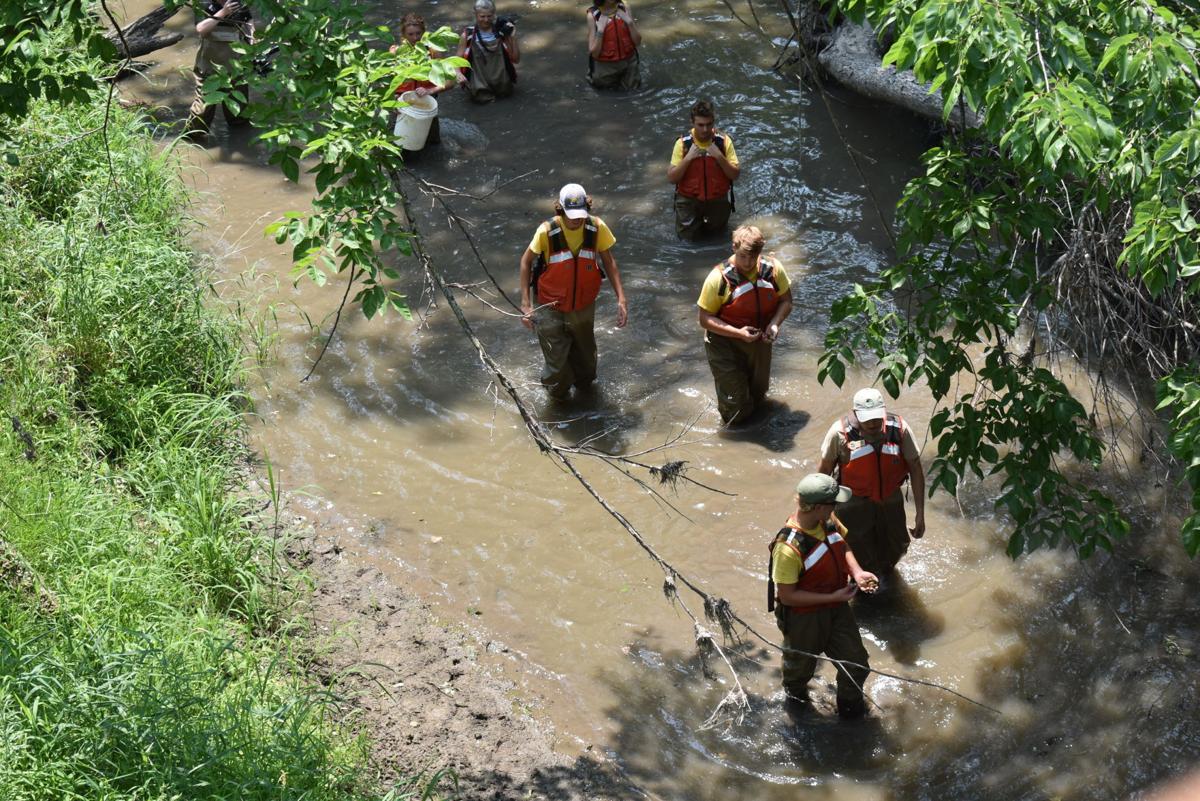 A group of  Youth Conservation Corps members makes its way down Cub Creek west of Beatrice, distributing mussels. This is the second year mussels were distributed at the location.

A group at Homestead National Historical Park is continuing efforts to boost the population of two species of mussels in Gage County.

The project began last July when 1,000 mussels – 500 fatmucket and 500 plain pocketbook mussels – were distributed in Cub Creek at Homestead.

A second round was completed Tuesday when another 500 plain pocket and 450 fatmucket mussels were placed in the creek.

“Before we stocked them last year we did a complete study of the stream to see what species were present,” said Jesse Bolli, Homestead’s natural resource management specialist. “We found several different species in the stream, but there were no fatmuckets and there were no plain pocketbooks. We felt it was appropriate to introduce those mussels.”

The mussels were provided by Nebraska Game and Parks, and 100 of each species were tagged with tracers so officials can check on them next year.

The same amount were tagged last year, and While the survey numbers seem low, they showed enough promise to continue the program for a second time.

“Game and Parks put PIT (passive integrated transponder) tags on 100 of each species,” Bolli said. “This year we redid the census and were able to search for those mussels we stocked. With the PIT tag reader we were able to find 29 mussels of the 200 we stocked with tags. We were pretty happy with that. Mussels are kind of at the bottom of the food chain. A lot of things like to eat them. We felt like even though that seems like a low number, the creek is healthy enough to support them.”

In addition to tracking the mussels with a PIT tag, a complete survey was done on a one-mile stretch of the creek. The survey required workers on their hands and knees to search for mussels and took eight days to complete. The results were 508 live mussels found. That figure is higher than the 311 found last year, which Bolli suspects was in part due to lower water levels in 2021.

“Last year we had a lot of high water, but this year the stream is at a nice steady flow,” he said. “It was really good for the survey. I think that’s the reason we found more mussels this year.”

The survey was conducted by members of the Youth Conservation Corps., a group of high school workers, as well as two interns at Homestead.

Bolli added it’s important to maintain the mussel population, as they provide many benefits for the ecosystem.

Freshwater mussels filter food like phytoplankton and other microorganism out of the water. Freshwater mussel numbers are declining in many areas and some species are disappearing altogether. In Nebraska historically there were 30 species, today only 12 of those species are doing well, the rest have been extirpated from the state or they are in danger of being extirpated.

“You just want to maintain biodiversity,” Bolli said. “Mussels, they are filtering waters. A mussel as small as 6 cm can filter one liter of water per hour. You get enough mussels out there and that does make a difference.

“It’s rather concerning that the diversity of mussels is decreasing. 300 species present in North America, 72% of those are of conservation concern. Scientists are concerned about a lot of mussels disappearing.”

Watch Now: America is running out of lifeguards

Intermittent rains at the Jefferson County Fairgrounds posed an additional challenge for the young kids, as they prepared to participate in th…

Dogs of all shapes and sizes sat stayed and begged for prizes Wednesday at the Jefferson County Fair’s dog show. The rain delay made a few of …

The Beatrice Mary Family YMCA is helping ensure area preschool through third graders have the Best Summer Ever, with their annual 10-week summ…

Community Players gets chilly with performance of Disney's "Frozen, Jr."

Beatrice should expect a cold front emanating from Community Players this weekend, as the Stars of Summer students prepare to perform Disney’s…

Members of the Youth Conservation Corps distribute mussels into Cub Creek Tuesday. A total of 950 mussels were distributed near Homestead National Historical Park.

A group of  Youth Conservation Corps members makes its way down Cub Creek west of Beatrice, distributing mussels. This is the second year mussels were distributed at the location.