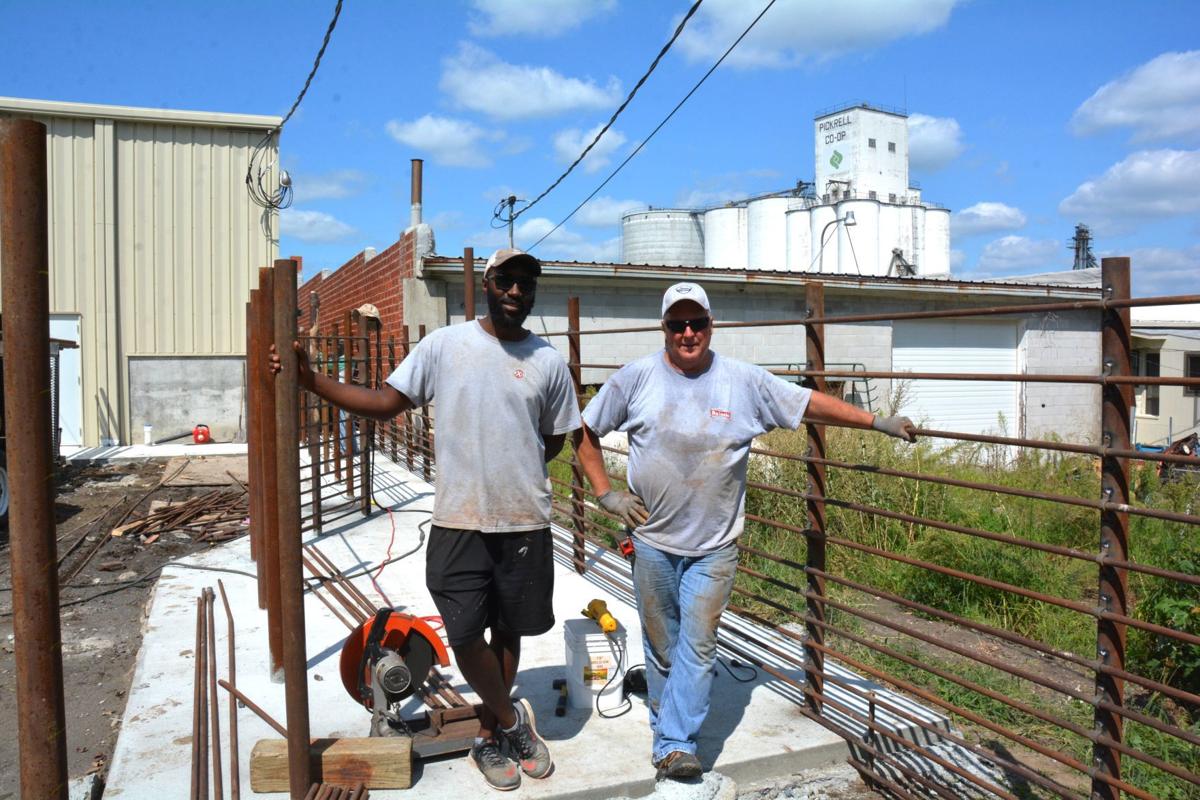 Bob Freeman, owner of the Pickrell Locker and Smokehouse and his father-in-law, Paul Jurgens, are putting the finishing touches on the new business. The first slaughter is scheduled for Monday. 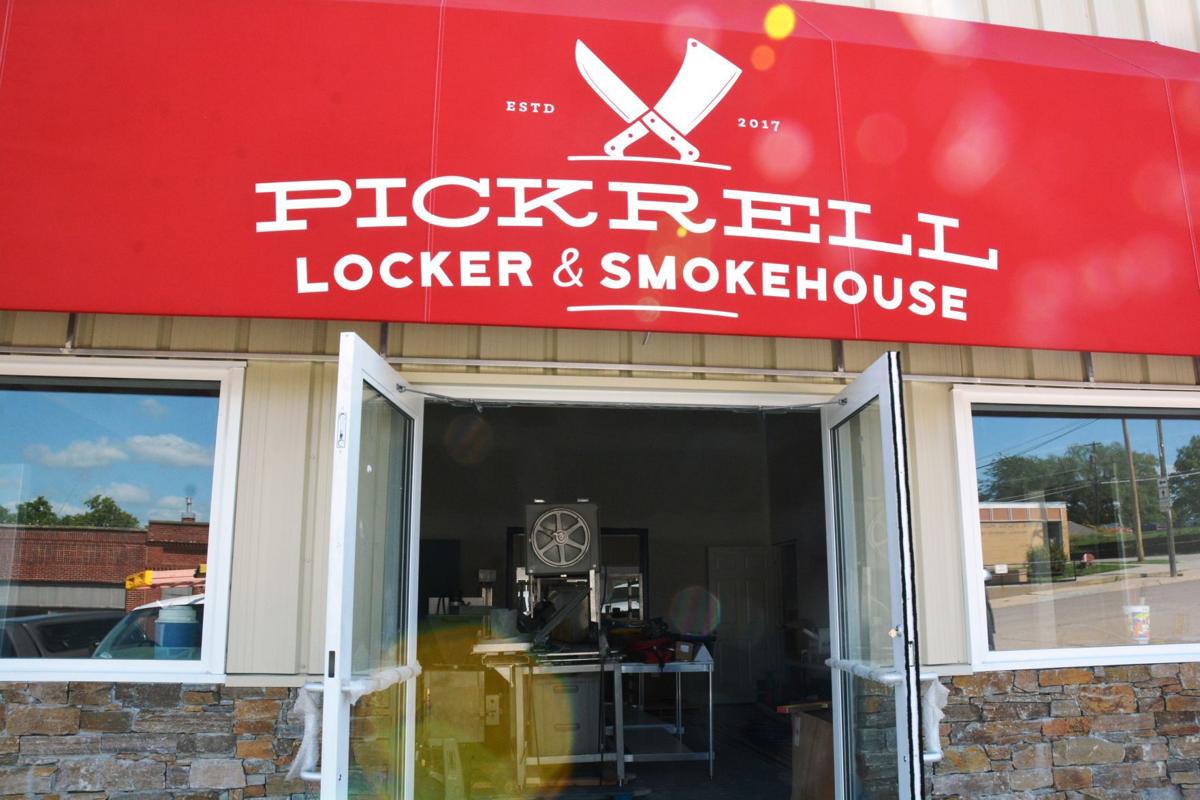 Meat processing equipment is visible from the front of the Pickrell Locker and Smokehouse as employees prepare for the grand opening. When the store opens in October, it will offer basic grocery items and fresh meat.

When the Pickrell Locker and Smokehouse opens for business, it will offer not only a variety of fresh meats, but something that Pickrell has been without for a number of years now: groceries.

The Pickrell Locker and Smokehouse is still undergoing the final steps of construction, but on Monday, the company is planning to hold the first slaughter, said owner Bob Freeman.

Preparing to open the Pickrell Locker and Smokehouse has been a gradual process, Freeman said, but by October 1, he hopes to have the retail operation up and running at full speed.

The store will offer traditional smokehouse items, like steaks, chops, burgers and other meats from the animals that are slaughtered, butchered and processed at the facility.

Pickrell Locker and Smokehouse will also have a limited lineup of grocery items, Freeman said, including milk and eggs.

The locker has been in the works for a while now, he said, but it’s almost ready.

“It's been about two years, just kind of learning the process,” Freeman said. “I've spent maybe the last year or so planning and designing and slowly building the facility.”

When he saw the property on Pickrell Road, right next to First State Bank, he did some market research, he said. After coming up with a business plan, he bought the property, which, at that time, was a dirt lot.

Freeman transformed it into what he calls a "state-of-the-art locker." There aren’t a lot of facilities like his, Freeman said, which is part of what makes it exciting.

Freeman also had a lot of support from the community, he said.

He is originally from Hastings, but lives in Adams with his family. His wife is from the area, and he has enlisted his father-in-law to help run the retail side of the business.

Paul Jurgens just retired from Exmark after 33 years to run the store, and he’s got big plans for the retail operation.

The fresh beef and pork will be cut to order, Jurgens said. They’ll also be able to do their own curing on-site, so they will have bacons, hams and Windsor loins available.

Eventually, Jurgens said that the company will move into making bratwurst and hot dogs as well as jerky and snack sticks. Soon, they’ll be applying for an off-sale liquor license to sell beer and wine, too.

“We'll probably have cheeses, summer sausage, just everything you might expect to find in any good meat locker,” Jurgens said.

While Jurgens will be in charge of the retail portion of the business, Freeman will be working mostly in the back of the shop.

“He's more of the bright shining face and I actually do the work,” Freeman joked.

Freeman hasn’t always been a custom slaughterer. A few years ago, he walked into a butcher’s shop and wanted to see where his meat came from, he said.

Freeman spent 15 to 20 hours a week working with butchers who had been processing meat for up to 50 or 60 years. It was almost like an apprenticeship, he said, learning the business with hands-on experience.

Encouraged to branch out on his own, he decided to give it a shot.

“It's kind of a leap of faith to take on something like this and take a chance on it and hope it works,” Freeman said.

Jurgens, who grew up on a dairy farm and helped his family with butchering, said he’s hoping to be a part of the retail operation for years to come.

The Drive-Thru in Beatrice reopens after fiery start last fall

After a fiery start last fall, a new restaurant opened on the east side of Beatrice in June.

Since John Jarosh and Neal Randel retired, Beatrice Public Schools will have two new additions to their administration this fall. Both of them…

On Wednesday, July 21, Public Health Solutions released a statement announcing that at least eight individuals have tested positive for the de…

Community Players gets chilly with performance of Disney's "Frozen, Jr."

Beatrice should expect a cold front emanating from Community Players this weekend, as the Stars of Summer students prepare to perform Disney’s…

On Friday morning, roughly three weeks after community members gathered at the Beatrice Mary Family YMCA to sign their names on a steel beam, …

A Lincoln man has received probation after four charges related to a traffic stop in Pickrell last August.

Two people were arrested on outstanding warrants after Beatrice police recognized the driver of a car in east Beatrice.

While summer activities provide many opportunities to walk barefoot, the Beatrice Church of Christ is helping ensure every soul has a sole wit…

Bob Freeman, owner of the Pickrell Locker and Smokehouse and his father-in-law, Paul Jurgens, are putting the finishing touches on the new business. The first slaughter is scheduled for Monday.

Meat processing equipment is visible from the front of the Pickrell Locker and Smokehouse as employees prepare for the grand opening. When the store opens in October, it will offer basic grocery items and fresh meat.