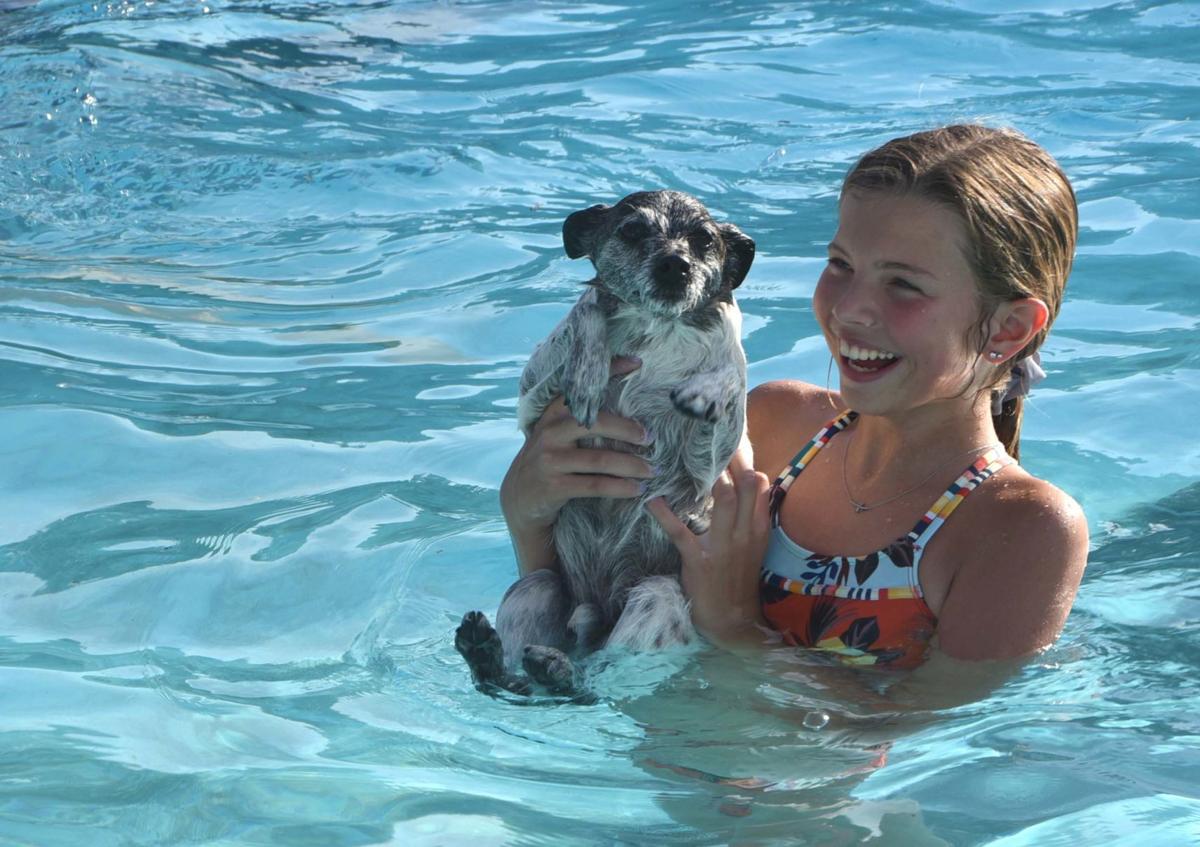 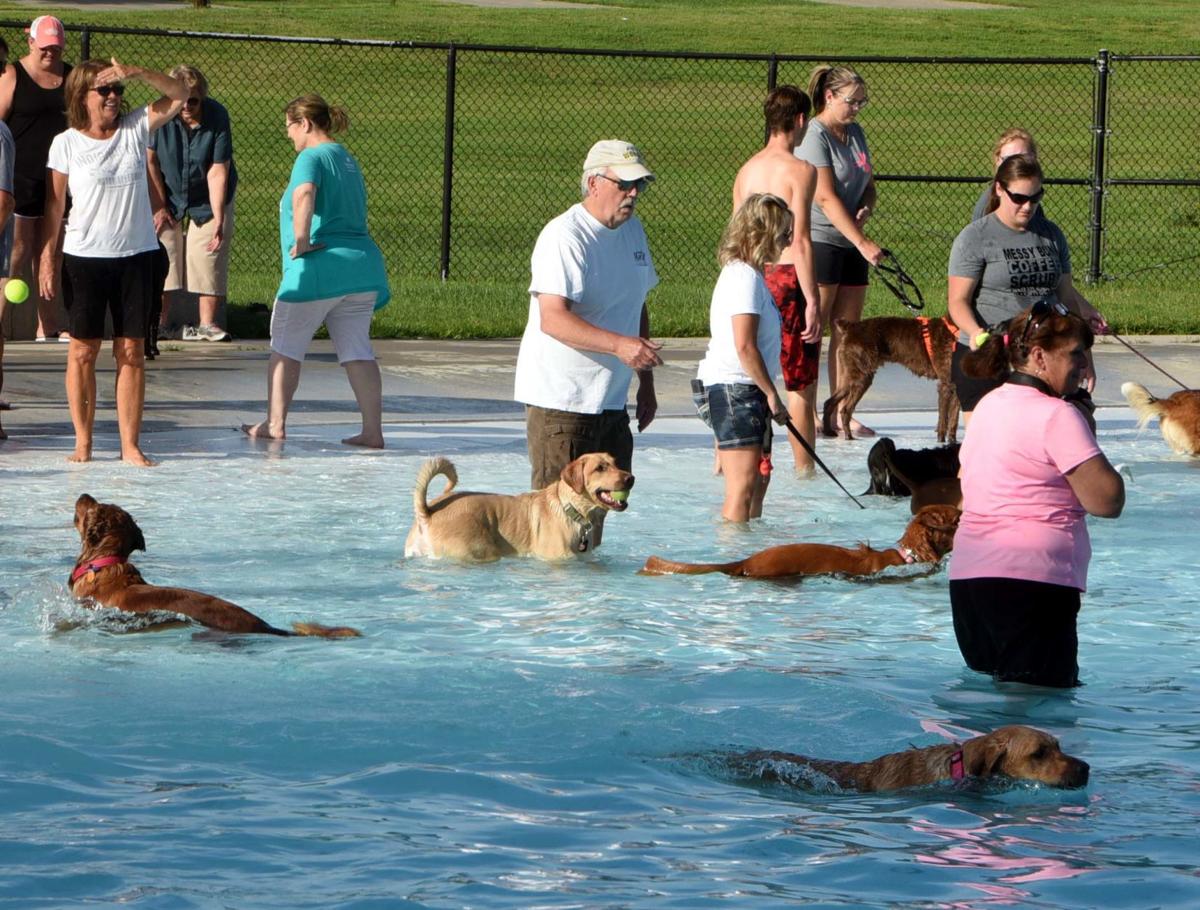 A group of dogs go after tennis balls in the shallow end. Previous Doggie Dips in Beatrice average 85 dogs, but this year there were 128 animal attendees. 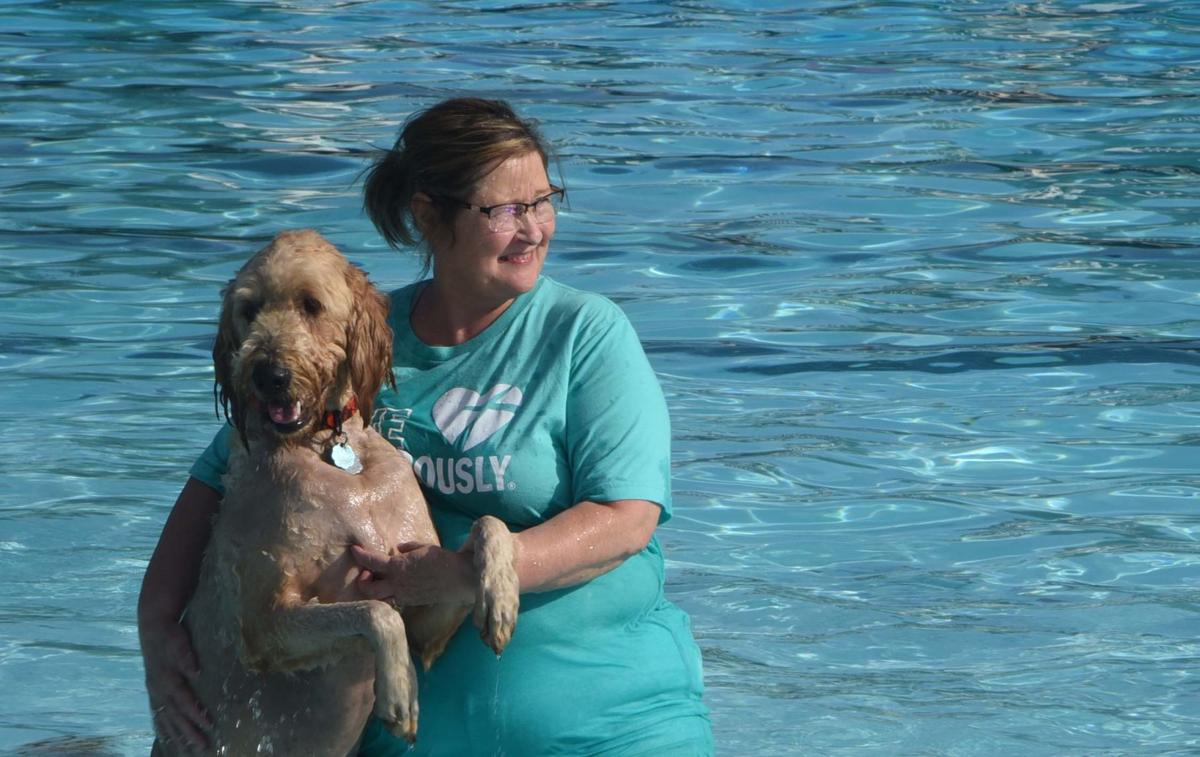 A woman hugs her dog as they get used to the pool. Doggie Dips have also been organized in Lincoln and Omaha.

The Big Blue Water Park was full of activity Wednesday evening. Chihuahuas doggie paddled in the shallow end, while Labradors and poodles raced to catch tennis balls in the deep end.

Groups of children splashed around with them, sharing a favorite summer activity with man’s best friend.

The event was part of the Beatrice Humane Society’s Doggie Dip swim night, with the proceeds going towards the animals there.

John Rypma, the Humane Society’s board chairman, said the previous Doggie Dips average 85 dogs a year. This year, 128 dogs attended, which is the most they’ve had so far.

“I’m so glad they do this,” Kim Allen, one of the attendees, said. “Everybody seems to get along great.”

Allen has brought her yellow Labrador, Daisy, to Doggie Dip for the last three years. She said she worries about bringing Daisy to other areas to swim, like lakes and ponds, because the algae can be toxic to dogs.

This could be a reason why dog swim nights are popular at pools. Rypma said the Humane Society got the idea after seeing Doggie Dips in Lincoln and Omaha.

Lifeguards manned their stations, helping dogs out of the pool and retrieving stray balls when the dogs got too tired to jump in.

Some owners were using the opportunity to socialize their dogs and teach them how to swim.

Rypma said in the past, dogs have fearlessly jumped off the diving boards. However, none seemed too keen on the idea this year.

Others took advantage of the large, enclosed area for their dogs to run around, while some just sat out and enjoyed the nice weather with their canines.

The event was held on the Water Park’s last night of the season, meaning the pool could get as hairy as possible because it would be drained soon.

Bette Anne Thaut, a Humane Society board member, thanked the city for allowing the event to happen.

Information and future Humane Society events can be found at beatricehumanesociety.org/

Beatrice’s Big Blue Water Park is closing earlier than usual this year to allow for repairs.

Author chronicles her dog's adoption in a children's book

From growing up in a circus in El Tajin, Mexico, to being abandoned, found and brought to Nebraska, the life of 13-year-old Chica has been eventful.

Volunteers care for Humane Society animals over the holidays

While many rung in the New Year with a day off from school and work, employees in the food, retail and emergency services sector went on with …

Witness protection programs, flood relief placement and food bank donations are some of the many ways the Beatrice Humane Society aided roughl…

A group of dogs go after tennis balls in the shallow end. Previous Doggie Dips in Beatrice average 85 dogs, but this year there were 128 animal attendees.

A woman hugs her dog as they get used to the pool. Doggie Dips have also been organized in Lincoln and Omaha.