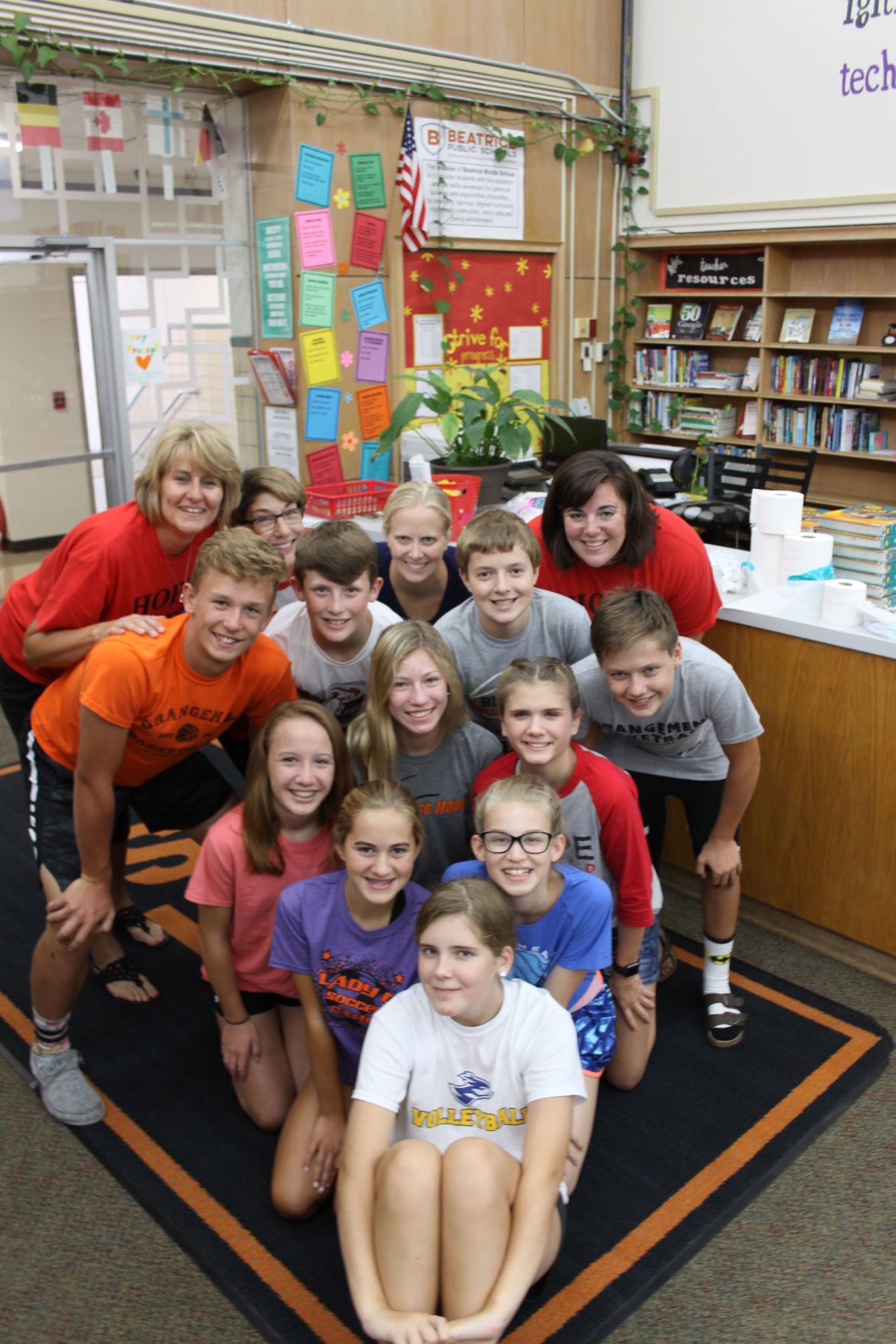 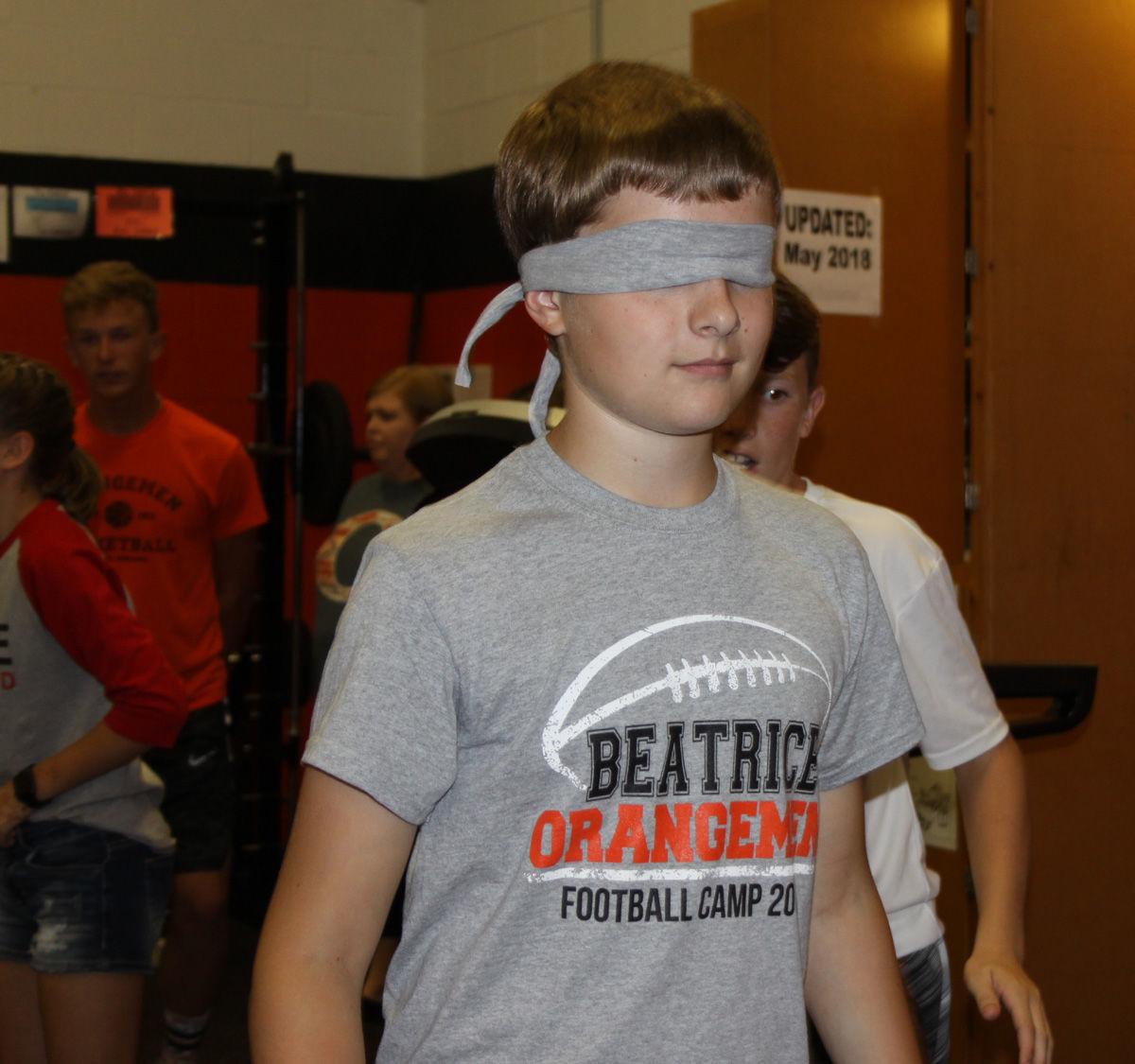 Alex Busboom maneuvers through a "mine field" during a game at Hope Squad leadership training on Thursday. 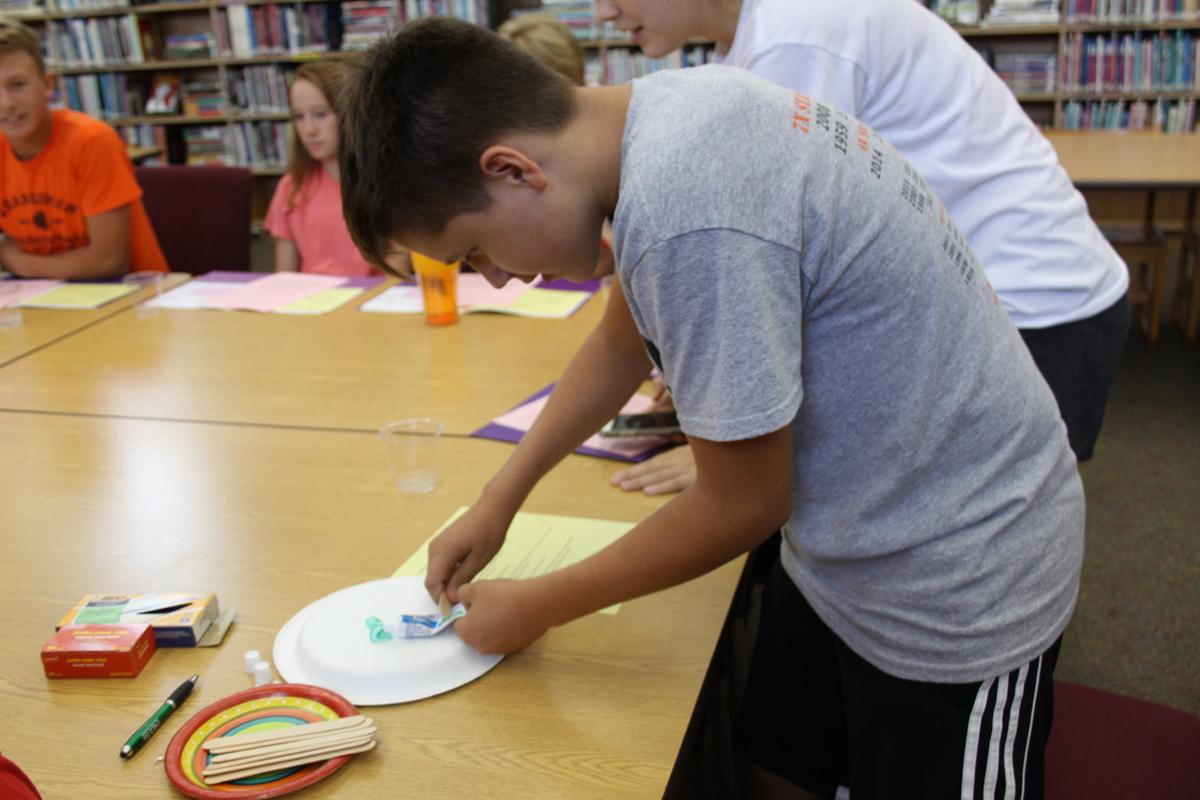 Ty Dittbrenner squeezes toothpaste out of the tube during a game at Hope Squad leadership training on Thursday at Beatrice Middle School. It proved to be more difficult to put the toothpaste back in the tube.

The overall goal of the Hope Squad is to reduce self-destructive behavior and youth suicide by training, building and creating change in schools and communities. The mission is to reduce youth suicide through education, training and peer intervention.

“We thought it was a great program and something that we needed here,” said Angie Vogel, a counselor at Beatrice Middle School and one of the advisors for Hope Squad. “Gage County has a high suicide rate and if we could do something on the front end to prevent that, we want to do that.”

The first semester of last school year was spent getting all of the pieces in place like QPR (Question, Persuade and Refer) training. Hope Squad has an advisory team of 10 members of school staff.

“We asked our students to nominate other students who were good listeners, not bullying, caring, kind and then we narrowed it down to the top names,” Vogel said. “We invited them and their parents to come and hear about the program and what we were asking them to do. We’ve been training them in suicide prevention techniques, but also how to spread hope throughout the school and change the culture to a more positive atmosphere.”

Tucker Timmerman is a member of the Hope Squad. He described it as “a form of leadership that the other peers in school can always come to you if they need help and they can trust you.”

Sheldon Crawford, a student member of the team, said Hope Squad was “spreading kindness and hope. It’s about creating more of a positive place.”

Macy Gronewold, Hope Squad member said “We’re here to be a positive role model and guide them through things. We’re here to listen. Stay positive and no matter what, it will always get better.”

Alex Busboom, member of Hope Squad said “We are people that help others if they are thinking about suicide. Things will always get better.”

Some of the Hope Squad members will be helping with sixth grade orientation and welcoming incoming students to Beatrice Middle School this year.

“We have such a great group of kids who are so passionate and willing to help. They have great ideas about how to spread positivity in our schools and it’s just fun to get them together because the brainstorming never stops,” Vogel said.

“I just love their enthusiasm about the group and about the school year,” said Amy Randel, also a counselor at BMS and co-advisor for Hope Squad.

State Fire Marshal Investigators have determined the fire was accidental as a result of a propane leak within the house.

One killed in crash near Diller

78-year-old Howard Behrends, of Diller, was taken to a Lincoln hospital and later died.

A Beatrice man was arrested for robbery after allegedly striking someone with a pole.

One dead after house fire near Filley

One person was killed in a house fire early Saturday morning near Filley.

Authorities on Thursday identified a woman who died in a house fire near Filley last week.

Two people were arrested Monday evening after drugs and paraphernalia were found during a vehicle search.

Three EMTs with Beatrice Fire and Rescue were recently recognized for 20 years of service.

Authorities were able to retrieve a small boat Tuesday afternoon that got stuck on the Big Blue River near the West Court Street bridge.

Alex Busboom maneuvers through a "mine field" during a game at Hope Squad leadership training on Thursday.

Ty Dittbrenner squeezes toothpaste out of the tube during a game at Hope Squad leadership training on Thursday at Beatrice Middle School. It proved to be more difficult to put the toothpaste back in the tube.