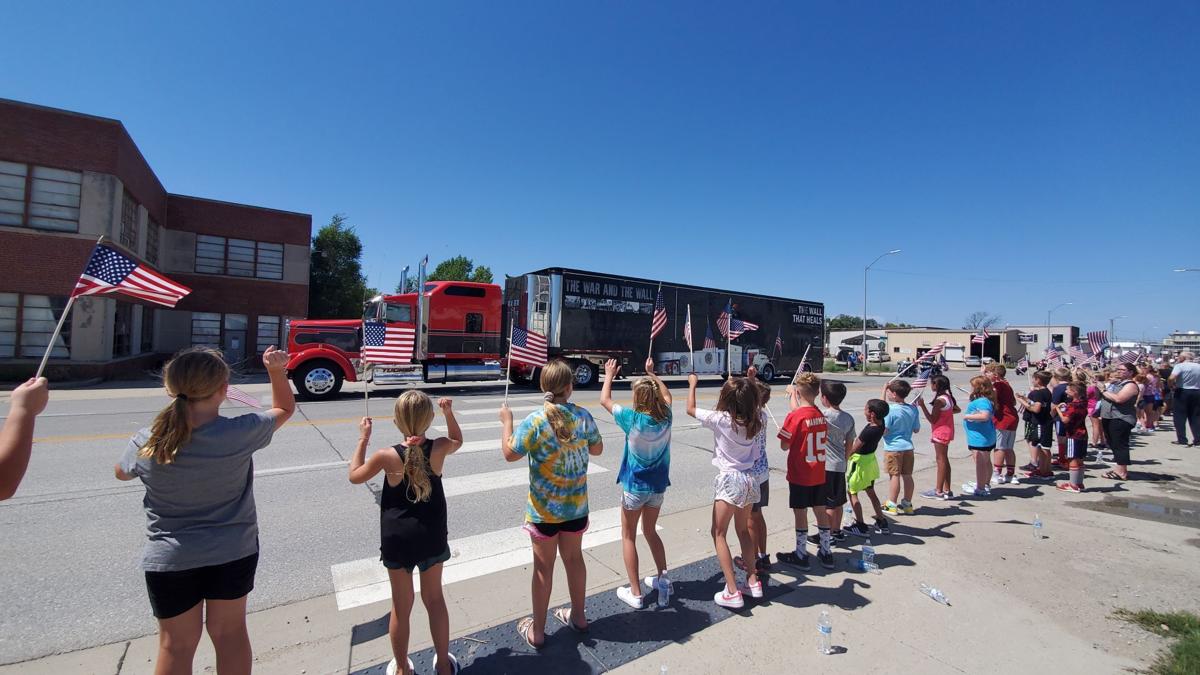 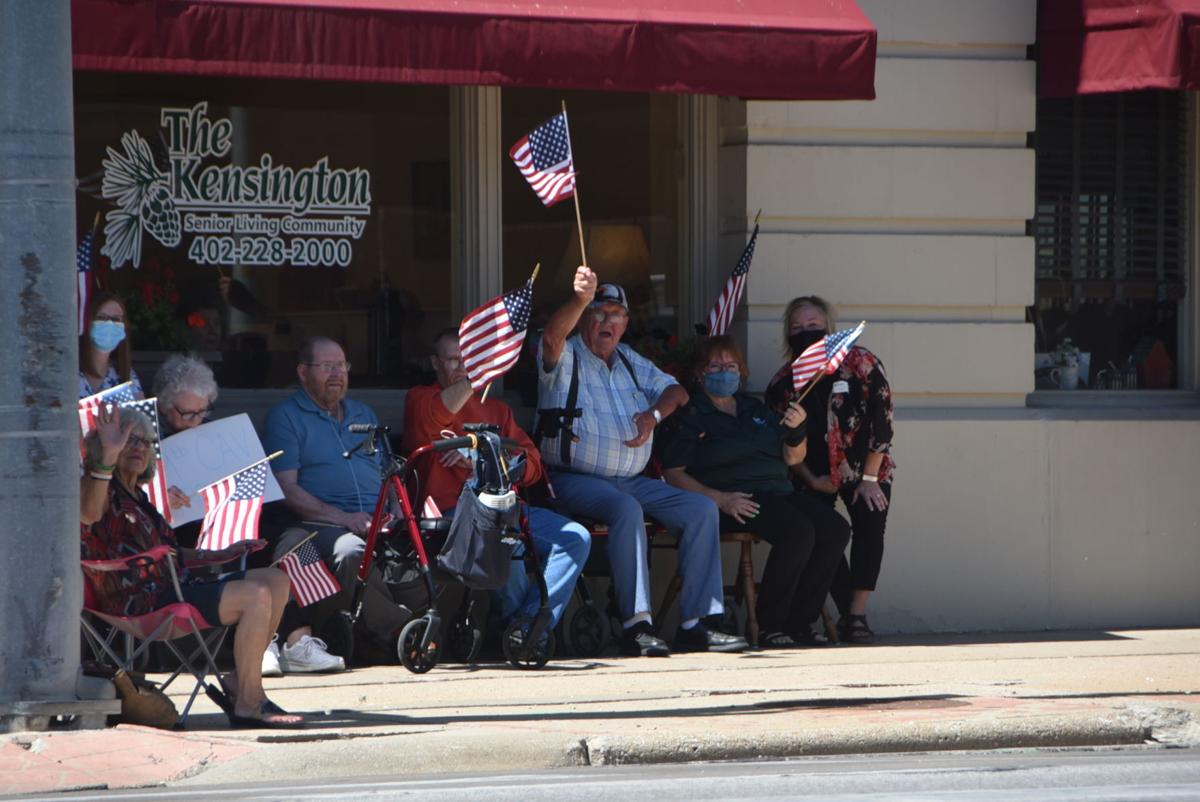 The Kensington senior living facility residents proudly wave American flags in anticipation for The Wall That Heals exhibit to drive through Beatrice on Tuesday. 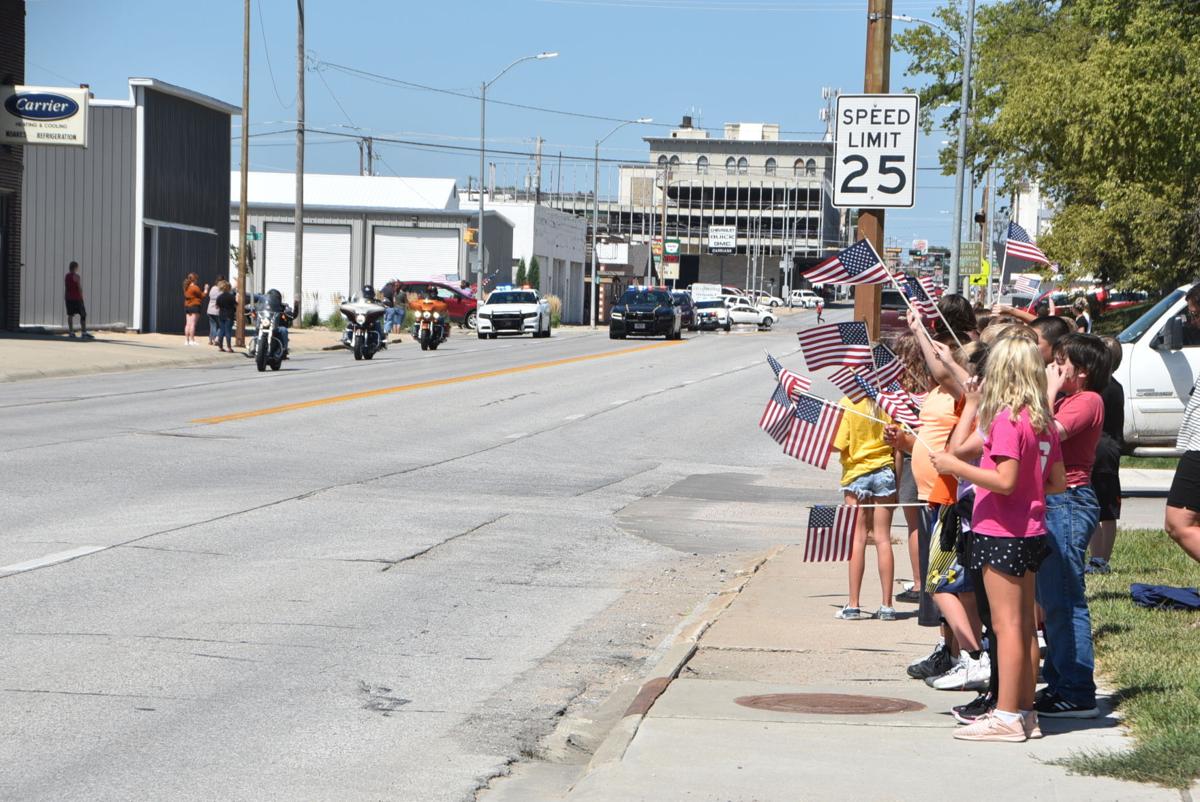 Stoddard Elementary students wave at the American Legion Riders and police escorts from the Gage County Sheriff's office as they follow The Wall That Heals to Wymore.

An exhibit recognizing Vietnam veterans was given escort by the Gage County Sheriff’s Office and American Legion Riders from numerous chapters in Nebraska and Kansas on Tuesday afternoon, as it went through Beatrice and Wymore on its way to Marysville, Kansas.

Beatrice Middle School and Stoddard Elementary School students, and residents of The Kensington braved the early afternoon heat to wave flags and cheer as The Wall That Heals drove through town. The younger kids even got passerby excited enough to honk their horns, with cheers of “America!” and “USA!”

“Like the original Memorial, The Wall That Heals is erected in a chevron-shape and visitors can do name rubbings of individual service member’s names on The Wall,” the website states. “The replica is constructed of Avonite, a synthetic granite, and its 140 numbered panels are supported by an aluminum frame. Machine engraving of the more than 58,000 names along with modern LED lighting provide readability of The Wall day and night.”

The website states that since being unveiled on Veterans Day 1996, The Wall That Heals has been displayed at nearly 700 communities throughout the nation, allowing the souls enshrined on the Memorial to exist once more among family and friends in the peace and comfort of familiar surroundings.

“The traveling exhibit provides thousands of veterans who have been unable to cope with the prospect of facing The Wall to find the strength and courage to do so within their own communities, thus allowing the healing process to begin,” the website states.

Stoddard Principal Kevin Janssen said he thought it was important for the Beatrice students to see the memorial and remember that freedom isn’t free.

“So many men and women have sacrificed so much for all of us to live and cherish the freedoms and belongings that we have,” Janssen said. “I feel it is imperative that students understand the importance of our Veterans and how their courage and sacrifices have shaped our nation and our world…Let's continue to work to educate our students to self-improve, and in doing so, improve our country.  We should not lose what has been gained by the sacrifice of so many men and women.”

According to the Marysville Convention and Tourism website, the exhibit will be on display for the public at the Feldhausen Field, located at 312 North 13th Street, from 12:01a.m. on Thursday, August 26 through 2:00p.m. Sunday, August 29. The event is sponsored by the Marysville American Legion Post #163.

Gage County prepares for another Big Give

An event that raised more than $220,000 for local organizations last year is returning to Gage County on Friday, Sept. 10.

Another day has come and gone for the Odell community, with lots of fun, laughs and celebration.

As the City of Beatrice prepares for its 2021 fiscal year to end on Sept. 30, the Beatrice city council had a special meeting Monday evening t…

Two 99-year-old World War II veterans got to relive their youth at Beatrice Municipal Airport on Tuesday, taking a Dream Flight in a 1942 whit…

It may be a short homecoming week for Beatrice Public Schools students next week, but that doesn’t make it any less spirited. The district has…

Beatrice Public School students rolled out of bed or put on their best flannel shirts Wednesday in order to celebrate homecoming week. For the…

How pumpkins became a part of Halloween

How pumpkins became a part of Halloween

The Kensington senior living facility residents proudly wave American flags in anticipation for The Wall That Heals exhibit to drive through Beatrice on Tuesday.

Stoddard Elementary students wave at the American Legion Riders and police escorts from the Gage County Sheriff's office as they follow The Wall That Heals to Wymore.