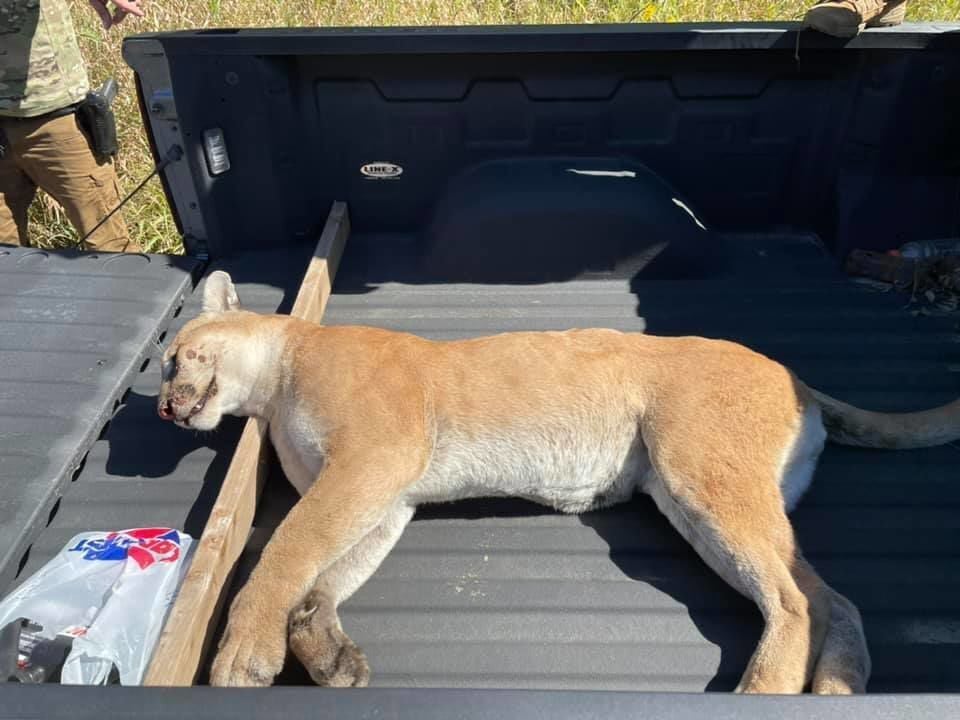 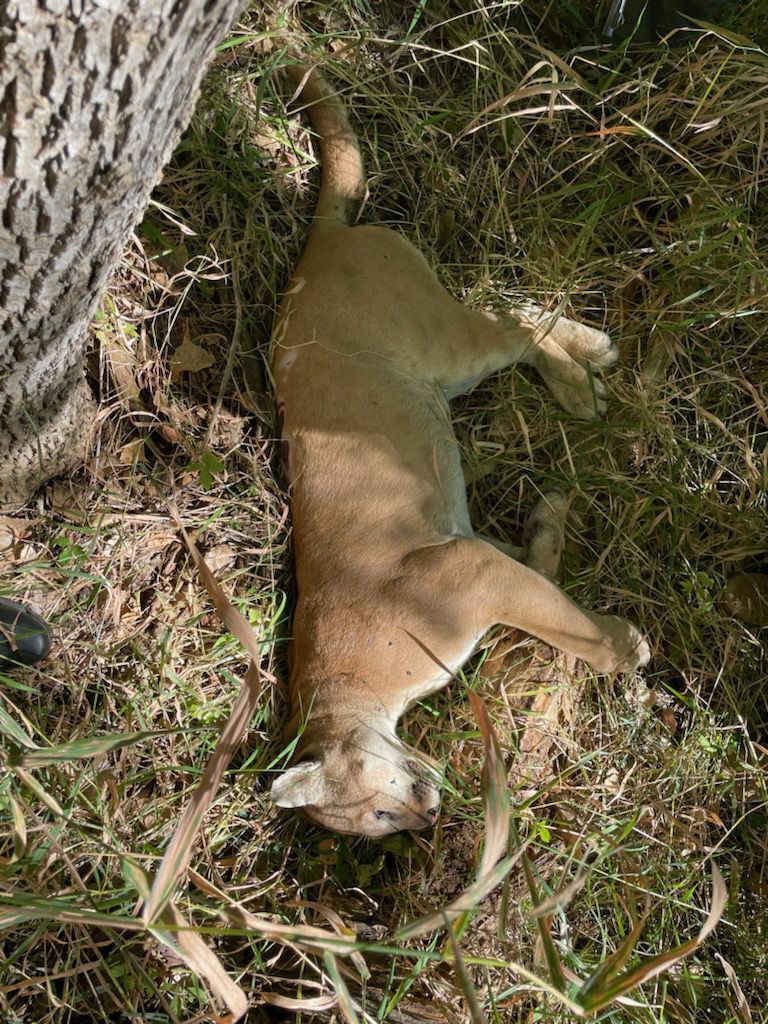 This 150-pound male mountain lion was hit by a car Tuesday in Nance County was found dead the next day, about 200 yards from the highway. 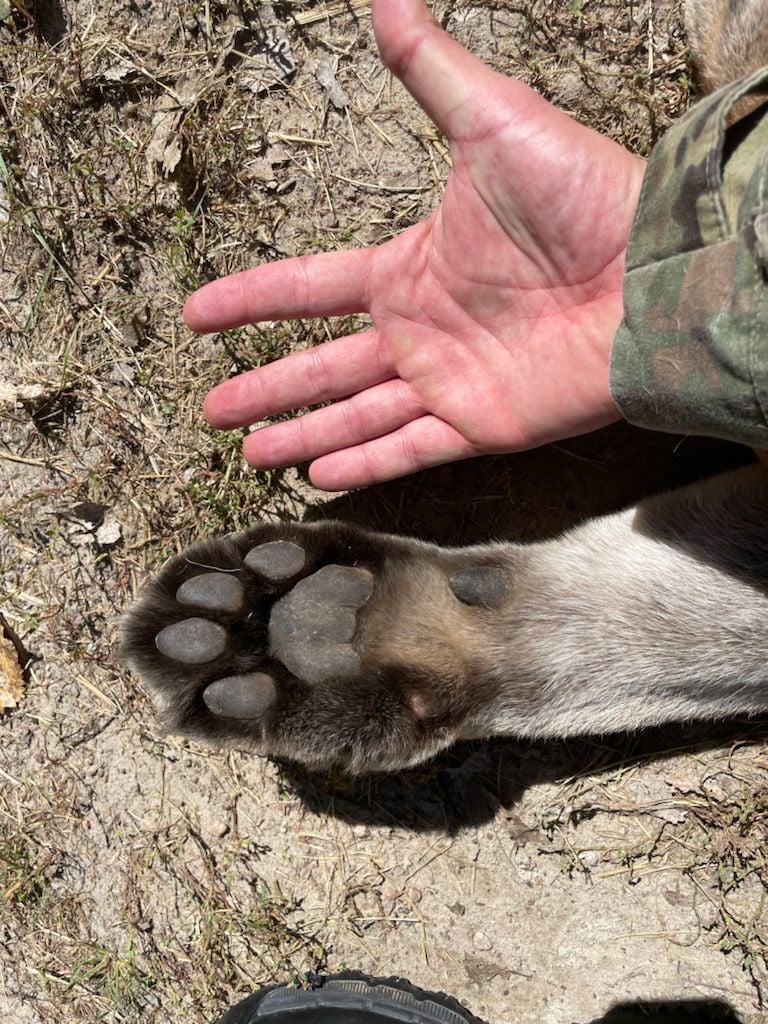 The adult male mountain lion was believed to weigh about 150 pounds.

The mountain lion picked the wrong moment to emerge from the riverside woods and cross the road.

At about 8:30 p.m. Tuesday, it stepped into the path of a Pontiac on the half-mile stretch of Nebraska 14 between the edge of Fullerton and the Loup River.

The high school student driving knew what she’d hit, though the cat had disappeared. And the sheriff and state conservation officer who responded found enough evidence to confirm it.

“The hood was dented in, and there was cat hair stuck in the grille,” said Nance County Sheriff Ben Bakewell. “Lots of hair.”

With an injured predator so close to town, they launched a search, notifying nearby residents and sending up a drone with a thermal-imaging camera.

They looked for three hours that night, Bakewell said, but there were too many deer, too much low-level ambient heat in the trees, too many false signals to continue.

They found the male lion dead, sprawled beneath a tree about 200 yards from the highway. A deputy carried the animal — estimated to weigh about 150 pounds — back to the road, where it was turned over to the Nebraska Game and Parks Commission.

“It’s definitely a very large cat,” said Bakewell, who took a photo of his size-14 boot next to its track. “It’s unbelievable how big of a paw it had.”

The sheriff wasn’t surprised by the presence of the predator. He’s received and reviewed about 30 trail-camera photos of mountain lions in Nance County this year, he said, and snapped his own picture last year.

“And I can confirm there are four that I know are different.”

But the Game and Parks Department doesn’t have evidence of a resident population in the area, said Pat Molina, assistant wildlife division administrator.

“The rest of the state, we would classify as migrant lions at this point. But have lions moved through that area? You bet.”

The state has two records of mountain lions in Nance County, one in 2009 and another in 2016. “It doesn’t mean there weren’t more,” Molina said. “Those are the ones we confirmed scientifically.”

The animal killed Tuesday wasn’t the first road-killed lion in Nebraska. Between 1991 and 2018, the state confirmed 13 mountain lions killed by cars, trucks and trains; he didn’t have immediate access to records for the past three years.

The cat that tried crossing the road Tuesday will be necropsied, and its body ultimately donated to a museum, Molina said.

‘Like a bomb’ – Small town of Taylor rattled by building blast

“That's just not something that happens in a small, sleepy town. We’re pretty quiet, and so it really shook us.”

State Patrol spokesman Cody Thomas said it happened shortly after 5 a.m. Thursday when a State Patrol investigator was driving south on U.S. 77 in an unmarked vehicle 1 mile north of town.

It’s the first time the facility has had three residents over age 100.

"We wanted to do something to honor the fallen men and women who paid the ultimate sacrifice," Rep. Lisa McClain said, R-Mich. She hopes the measure quickly passes the Senate and that President Joe Biden will sign it.

Nebraska woman with cancer reconnects with pen pal from Wisconsin

Dorothy Reicks of Pierce and Joanne Thome of Wisconsin became pen pals about 73 years ago. Reicks, who has ovarian cancer, was surprised with a visit from Thome on last week in Grand Island.

The elephant barn at Omaha's Henry Doorly Zoo & Aquarium is getting an extra dose of baby-proofing.

No one knows why Benton Kinkead's three children never claimed his ashes. Now the Civil War veteran will be buried next to his wife at a cemetery in Plattsmouth.

The opinion says that in light of conflicting medical information, doctors should be free to use "additional tools that could save lives, keep patients out of the hospital and provide relief for our already strained healthcare system."

Next year, the 34-member Dannebrog Golf Course will have to pay several times more in rent than in the past — and share the course with longhorns.

This 150-pound male mountain lion was hit by a car Tuesday in Nance County was found dead the next day, about 200 yards from the highway.

The adult male mountain lion was believed to weigh about 150 pounds. 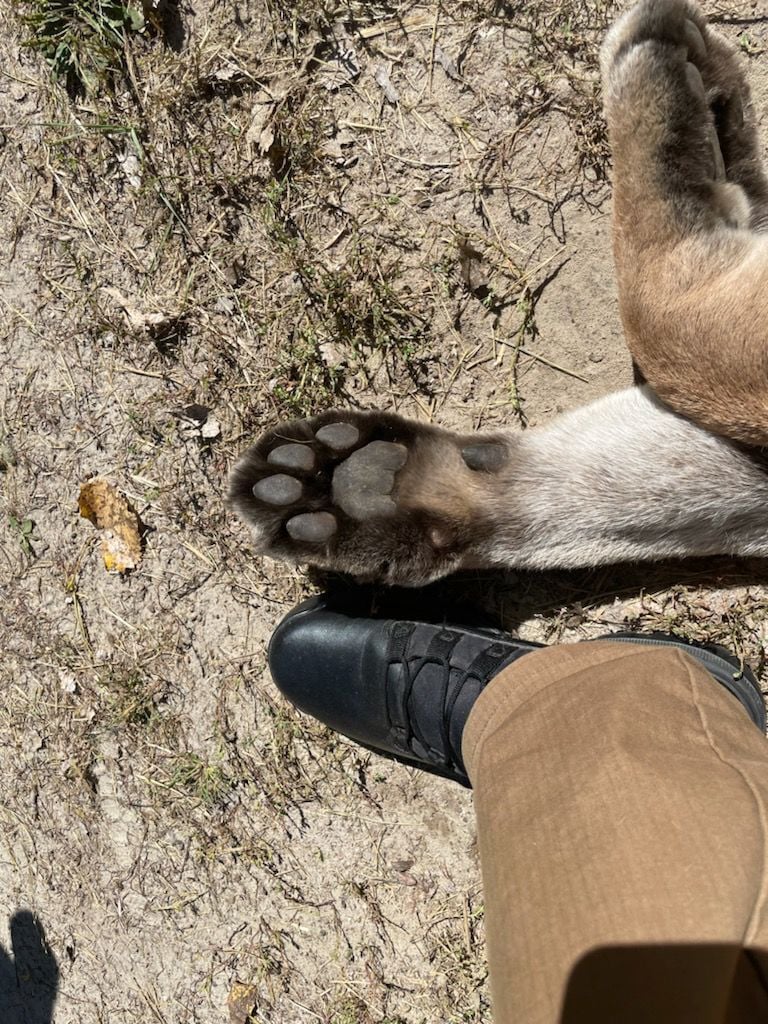 The mountain lion's paw alongside a size-14 boot.