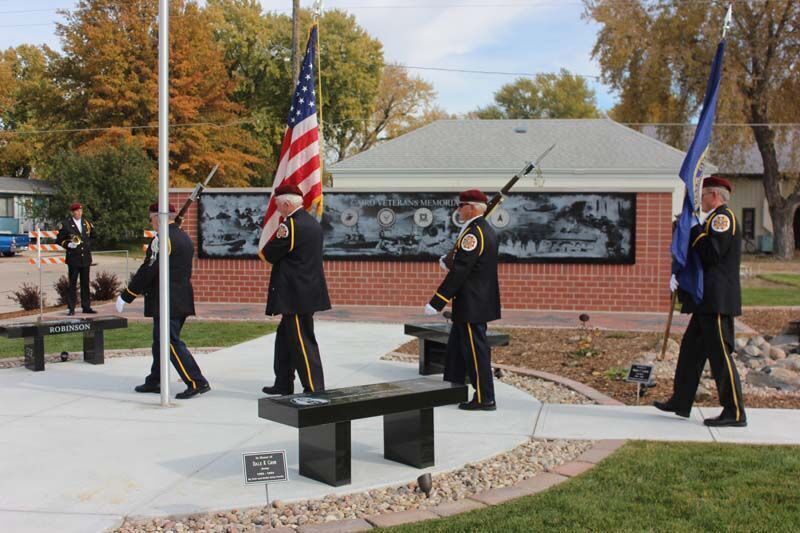 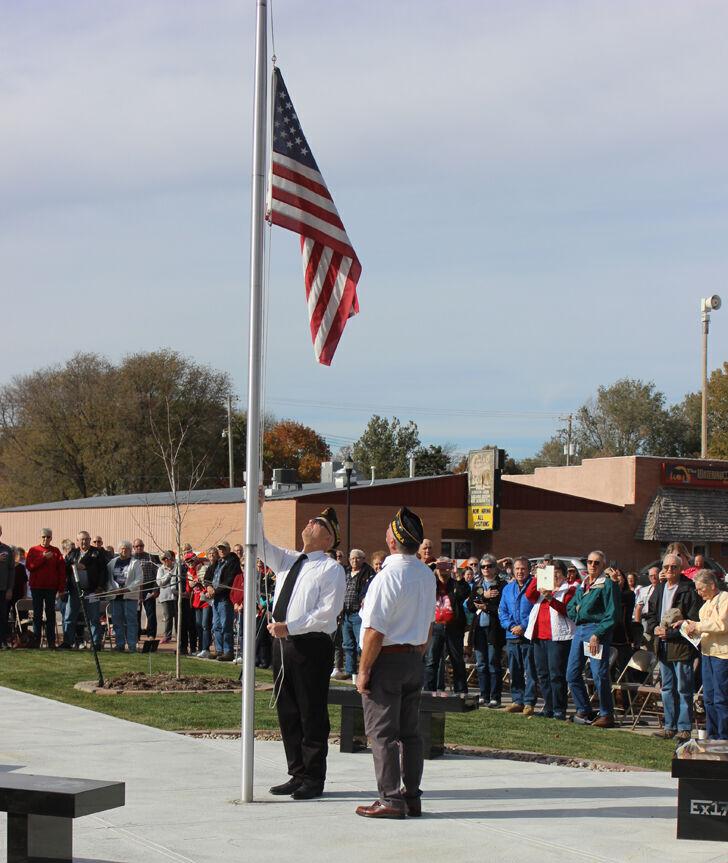 Rick Leth and Wade Osburn of Cairo American Legion Post 333 raised the flag from half staff to full staff Saturday in Cairo.

CAIRO — A vacant lot has been transformed during the past three years into a beautiful veterans memorial, which was dedicated this past weekend at Cairo.

The park, which is at the intersection of Nile and High streets, is “a beautiful tribute to our veterans,” said Charity Adams, the event’s master of ceremonies.

Close to 200 people attended the ceremony.

Adams said the Cairo Veterans Park was a complex project that took a lot of time and effort to create. The park replaced an “absolute disaster of a dirt lot,” she said.

Volunteers put in much of the work to honor veterans. Adams thanked those who helped get their hands dirty, laying sod and performing other tasks. Those groups included the Cairo Fire Department, Cairo QRT, the Centura football team and city employees.

The Grand Island United Veterans Club brought 13 people to Cairo for the ceremony, including its color guard. Rick Leth and Wade Osburn of Cairo American Legion Post 333 raised the flag from half-staff to full-staff.

The idea for the park began with a cash donation from the late Edward VanWinkle, who spent almost 12 years in the Army. He served during the Korean War and several years after that in Japan. He died in 2014 at the age of 83.

His wife, Judy, and their four sons carried on Edward’s plans. Judy passed away Oct. 29 of this year at the age of 81.

Kirby, one of the sons, said the completion of the park was a little overwhelming.

“I’m pretty proud of what we’ve done here on my dad’s behalf, and just kind of excited, too,” he said.

The veterans park is good for Cairo “because we need to recognize our veterans. We need to honor them. That’s just something my dad, raising us, instilled into us. He was such an Army guy,” Kirby VanWinkle said.

He and a brother were able to bring their mother to the park in her wheelchair before she died.

State Sen. Tom Brewer of Gordon, the featured speaker, said, “This is the third one of these memorials I’ve been a part of. And this one is by far the nicest. Some of the others were kind of limited on the piece of ground they had to work with.”

Brewer drives through Cairo about once a week, taking Nebraska 2 to and from Lincoln. But he hadn’t seen the veterans park until Saturday.

Looking at the park “kind of takes your breath away because whoever come up with this idea needs to be commended. This is amazing. It is probably the finest memorial I’ve seen,” he said.

Brewer, who is chairman of the Legislature’s Military and Veterans Affairs Committee, served eight tours in Afghanistan.

Even if you’ve accomplished a lot, “sometimes it’s what you do after you leave the military that helps other veterans,” he said.

“In the Legislature, we have never really had a champion for veterans,” Brewer said. But in the past four years, a number of bills have been passed in support of vets.

Some of the measures might seem like small things, but legislators have succeeded in making “life a little better for veterans,” he said.

“But you guys should hold your heads high and be proud because when you build a memorial you do it right,” Brewer said.

The University of Nebraska and Creighton University have launched a massive study to monitor the former biofuel plant's effects on the environment, wildlife and humans over the next decade, a project that could cost $10 million.

The people who live in Mead noticed something was changing in their environment. But it would take time and persistence to pinpoint what was wiping out bee colonies, sickening animals and potentially causing health issues for residents.

A state conservation officer suspected it was a wolf, but it could take months to complete genetic testing at a federal lab.

At least 10 families helped out with the harvest, with each crew doing about 160 acres every two hours.

“If you ever needed anything, whether it was 2 o’clock or 4 o’clock in the morning, Tim was the person I knew – growing up – that was my person to call for anything,” said his sister, Molley Lippold of Omaha.

Drivers will need to turn on Pratt Court and then head north to access the terminal, South Garage and south economy parking, the Omaha Airport Authority said.

Doug Kirby would have died in South Vietnam in 1970 were it not for a trio of soldiers who rushed him to a hospital. Kirby, of Omaha, never met any of the men who saved his life … until this week.

Where does Donald Trump stand now? 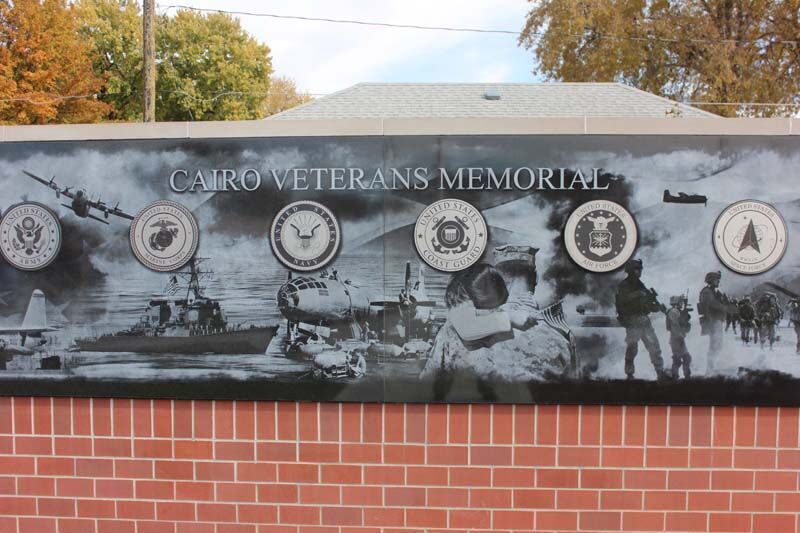 It took about three years to build the Cairo Veterans Park. 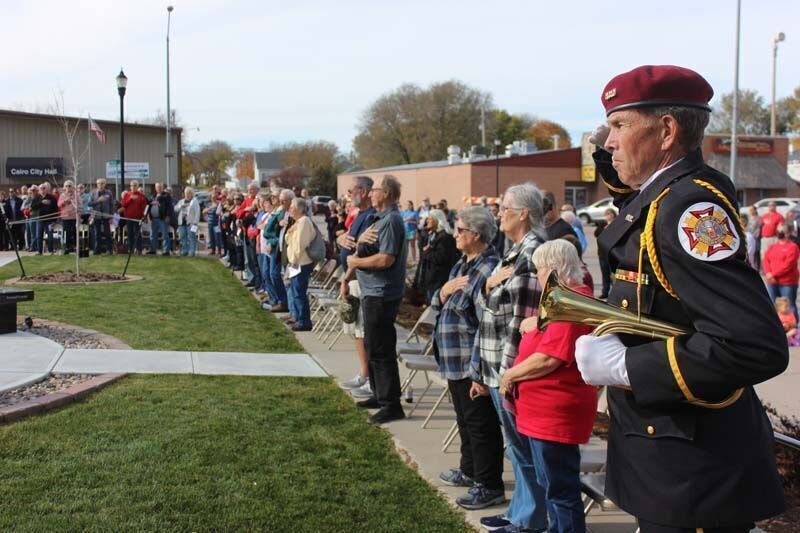 Rick Leth and Wade Osburn of Cairo American Legion Post 333 raised the flag from half staff to full staff Saturday in Cairo. 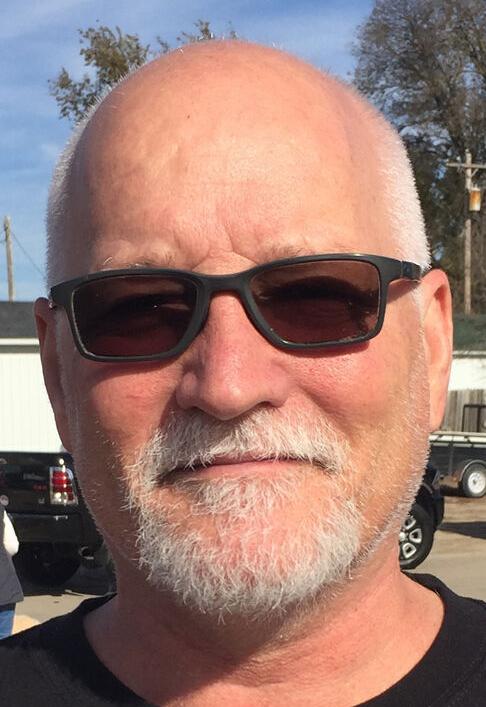