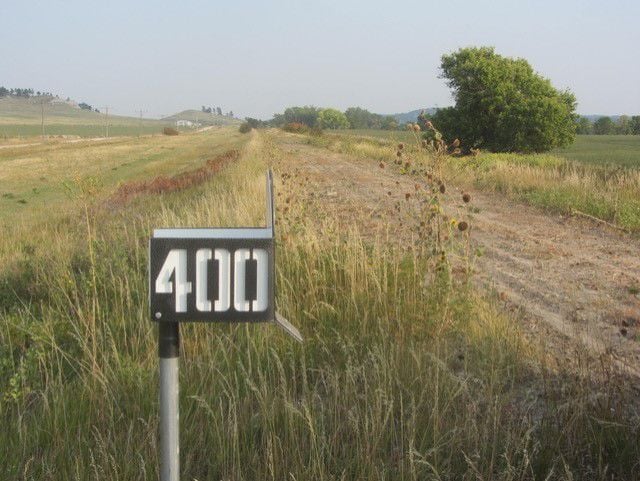 More than 320 miles from its start in Norfolk, the Cowboy Trail ends here — a half-dozen miles east of Chadron. 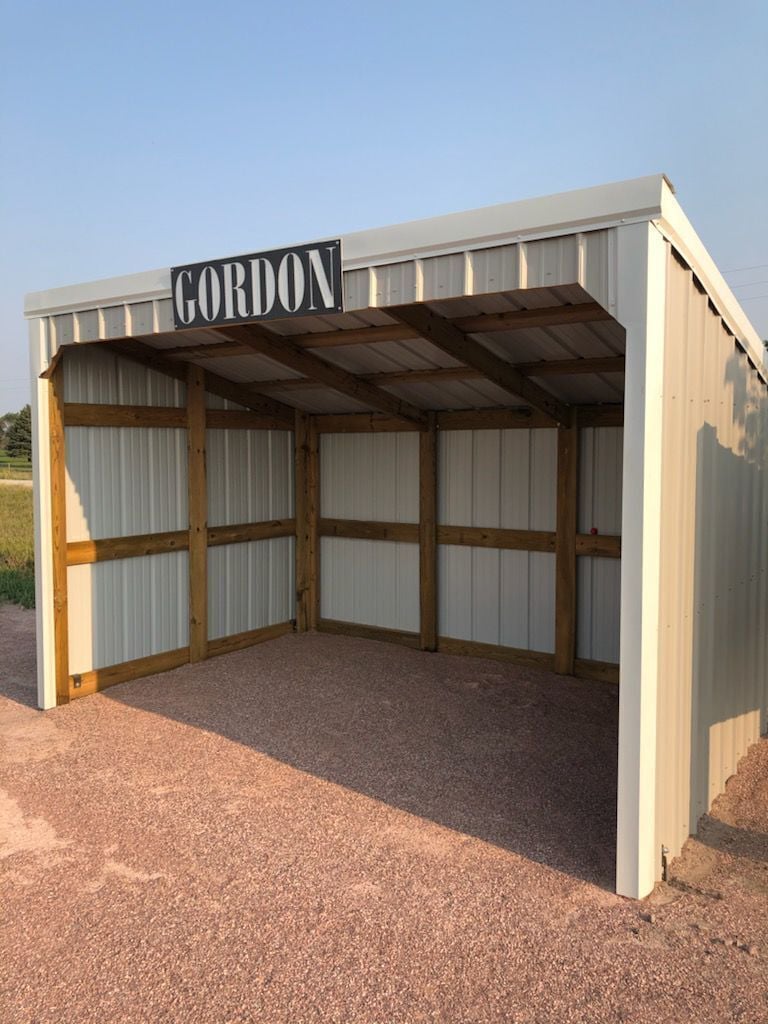 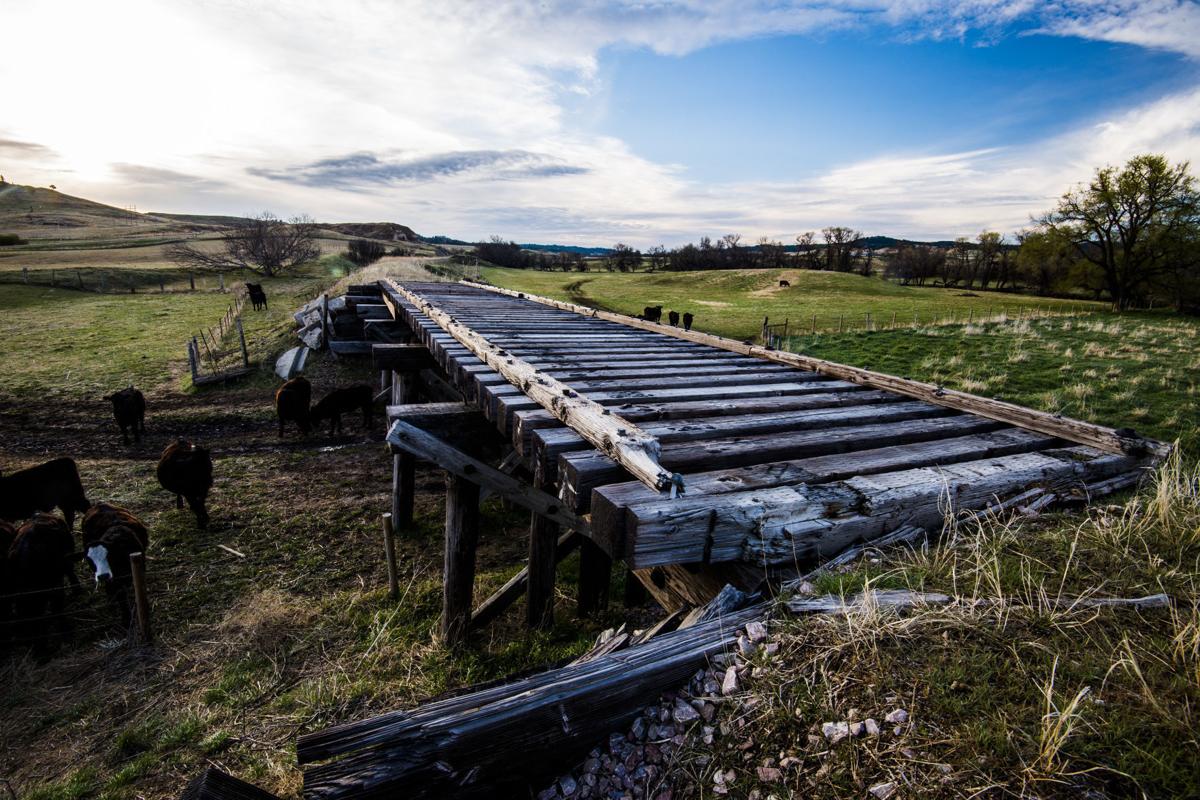 Cattle graze near a railroad bridge on an undeveloped portion of the Cowboy Trail near Chadron. 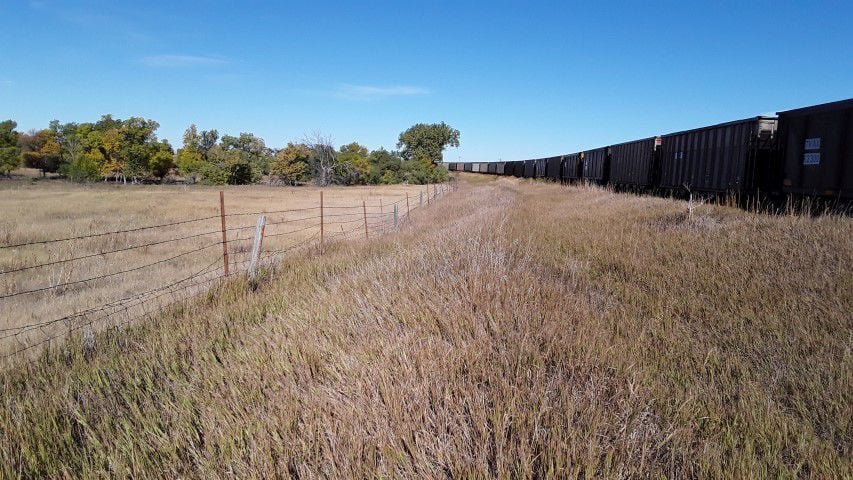 The Northwest Nebraska Trails Association plans to carve a six-mile connection from downtown Chadron to the Cowboy Trail through the grass alongside a set of railroad tracks. 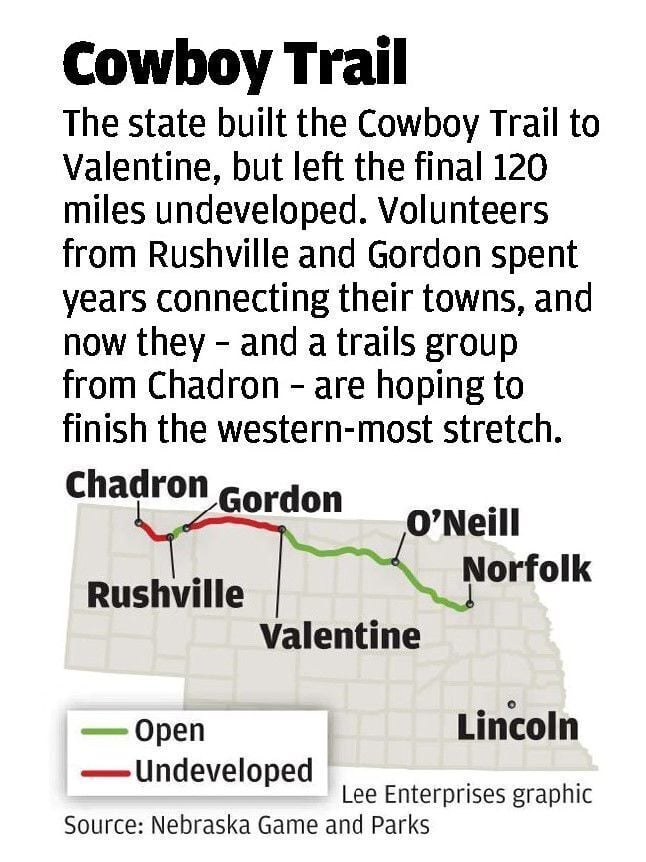 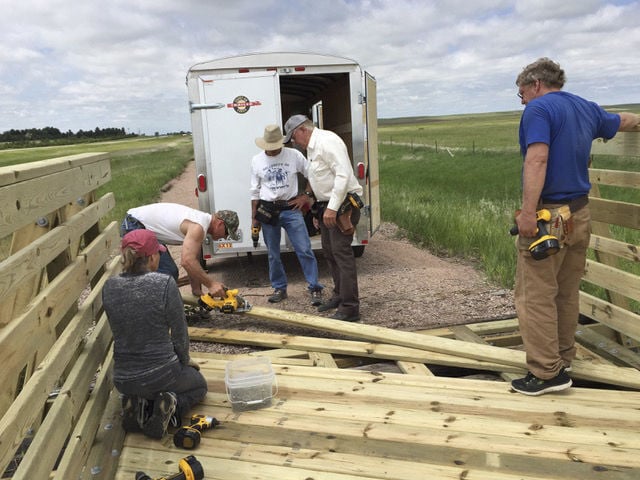 Volunteers from Cowboy Trail West finished and maintain 16 miles of trail between Gordon and Rushville.

The state’s longest recreational trail doesn’t make it all the way to Chadron, but it comes close.

From its start in a Norfolk city park, the Cowboy Trail meanders northwest for more than 320 miles, officially ending at what’s known as Mile Marker 400 — a remnant of the original Chicago and North Western railroad — about six miles from downtown Chadron.

Those farthest reaches of the trail remain undeveloped and officially closed, a quarter-century after the Nebraska Game and Parks Commission started Cowboy Trail construction. The state spent roughly $10 million in federal funding on the first 200 miles from Norfolk, then chose not to build the final 120 miles beyond Valentine.

But two grassroots trail groups in northwest Nebraska — one in Chadron, one in Sheridan County — are trying to fill in some of the blank spots on the map, raising money and mustering volunteers to finish what they say are the trail’s most scenic stretches.

“We have an undiscovered gem up here,” said Brittany Helmbrecht, president of the Chadron-based Northwest Nebraska Trails Association. “From the views we have — you can see the Pine Ridge, and there are lots of shade trees — I think it’s the most beautiful part of the trail.”

The trail’s western reaches will get built someday, and its future users from Chadron want to be ready.

But the trail’s end would still be a half-dozen miles out of town. “And for our community members to get there, they’d have to ride along Highway 20,” Helmbrecht said.

So her group is raising money — it recently secured a $10,000 grant from the Rails-to-Trails Conservancy — and is working with the Nebraska Northwestern Railroad to build a trail connection from downtown Chadron to Mile Marker 400.

The railroad granted the group an easement, allowing it to blaze the new trail alongside its tracks east out of town, which it uses for rail car storage.

The trails group has been working on the project for several years, though it still hasn’t broken ground. It will use the $10,000 grant to turn a recent engineering study into design documents, and break construction into stages.

The first two should be simple and straightforward, Helmbrecht said: Carve the trail from the grassy railroad right-of-way and smooth it with crushed limestone. The next two stages will be complicated by the need to cross the Big and Little Bordeaux creeks.

The Northwest Nebraska Trails Association started in 2017, when a group of enthusiasts got together to create a recreational trails guide for the area.

They stayed together, incorporated a year later and began hosting cleanup and maintenance days, group hikes and bikes, and built a trail at Toadstool Geologic Park.

But the potential of the Cowboy Trail loomed so close, and they couldn’t ignore it.

“Everyone has been talking about the Cowboy Trail for 25 years,” she said. “So when our group started, people thought it was great idea, but they said, ‘Don’t hold your breath.’”

The group's president is patient. They don't have a timeline for raising the estimated $2.6 million to $4 million required to get the connection trail built, but she hopes to have it carrying bikers out of town and to Mile Marker 400 within five years.

And she hopes they find fresh limestone on that end of the Cowboy Trail when they get there.

The end of the line

Not far down U.S. 20 to the east, another group of walkers, runners, hikers and bikers grew tired of looking at the unfinished Cowboy Trail. It was so close — it cut right through their towns of Rushville and Gordon — but so far from completion.

They formed Cowboy Trail West in 2001, and have spent the years since taking a stretch of the trail into their own hands.

“It’s been quite a struggle,” said Ross Elwood, president of the nonprofit. “We started 10 years ago, but you look back at all of it, and there's a lot that happened in those 10 years.”

“We wouldn’t be able to do work in that area without them. Local buy-in is the key to getting anything done in any area around the state, and having their support is the reason why it’s developed in that section.”

But Cowboy Trail West members aren’t done. They hope to build the trail farther west, and they thought they’d have more progress by now.

The basic plan: Cowboy Trail West would help get the trail built about halfway to Chadron, and Northwest Nebraska Trails would come in from the other side. The two would meet near the middle, at Hay Springs.

Combined, the two projects would complete the westernmost 25 miles of trail.

The Game and Parks Commission took the first step, contracting to remove the rock ballast from the former rail bed, leaving a dirt surface.

But then progress stalled, delayed by the one-two punch of statewide flooding in 2019 and the pandemic in 2020.

It’s not clear when trail work can resume, Duryea said.

The first grant-funded stage, Rushville to Hay Springs, is now in the federal permitting phase. He didn’t know how long that would take, but construction can’t begin until it’s complete.

“Every project is unique; it depends on what the review finds,” he said. “It can be a very long process.”

And because the state is taking that end of the trail one piece at a time, no permitting or design work has started on the stretch west of Hay Springs.

The wait could be costly, Elwood said. Two years ago, the combined grants and matching funds might have covered the 25 miles — enough limestone for the trail, enough lumber to deck 27 bridges.

Construction costs — particularly lumber — have exploded since then, and he doubts the funding will still be enough.

But not everybody is waiting. Once Game and Parks removed the rocks from the trail, people near Hay Springs began using the trail, Elwood said, and his group began maintaining it. Even if the state considers that stretch officially closed.

The dirt doesn’t make for the smoothest surface. And he worries about the undecked bridges, the trail-users navigating over the old railroad ties suspended above the ground below.

“There’s a lot of people using it — a lot of people riding on it, walking on it. We’re looking at someone having an accident on those bridges. They’re a little on the dangerous side.”

But that use of the unfinished trail — and the popularity of the 16 finished miles between Rushville and Gordon — shows the demand for trails in northwest Nebraska.

It’s time to get the last legs built, Elwood said.

“It was supposed to happen two years ago. I can understand; the flooding was a real mess. And COVID was a real mess. But we’re waiting for Game and Parks to move on it, and it’s about time for them to move.”

For more information, or to donate to the trail groups, go to:

20 photos to remind you how beautiful Nebraska is

Grasshopper and a bee

For more information, or to donate to the trail groups, go to:

Fullerton hasn’t had a swimming pool for two years. The old pool closed in 2018. So the excitement within the community and its young people “has been tremendous,” the assistant manager said.

Since Legislative Bill 650 was passed last month, multiple companies have announced plans to contract with Nebraska ethanol producers to capture their carbon dioxide before it enters the atmosphere.

Approval by the city and the Nebraska Racing and Gaming Commission would allow the track’s developers to pursue casino gambling there.

Delilah Poole has just upped the ante on the typical lemonade stand. And she made over $100.

The discovery of a species of kissing bug in Nebraska has prompted state and University of Nebraska officials to alert the public to the risks posed by the bugs.

His hand-cut firepits feature intricate silhouettes of wildlife and farm scenery. For propane firepits, Shawn Racicky has even created pits with steel logs that look like the real thing with flames flickering around them.

Protesters prompted change, created controversy as they marched in Omaha

"I felt like I could make a difference." Omaha protesters and activists reflect on the past year and how the events changed them and the city.

More than 320 miles from its start in Norfolk, the Cowboy Trail ends here — a half-dozen miles east of Chadron.

Cattle graze near a railroad bridge on an undeveloped portion of the Cowboy Trail near Chadron.

The Northwest Nebraska Trails Association plans to carve a six-mile connection from downtown Chadron to the Cowboy Trail through the grass alongside a set of railroad tracks.

Volunteers from Cowboy Trail West finished and maintain 16 miles of trail between Gordon and Rushville.