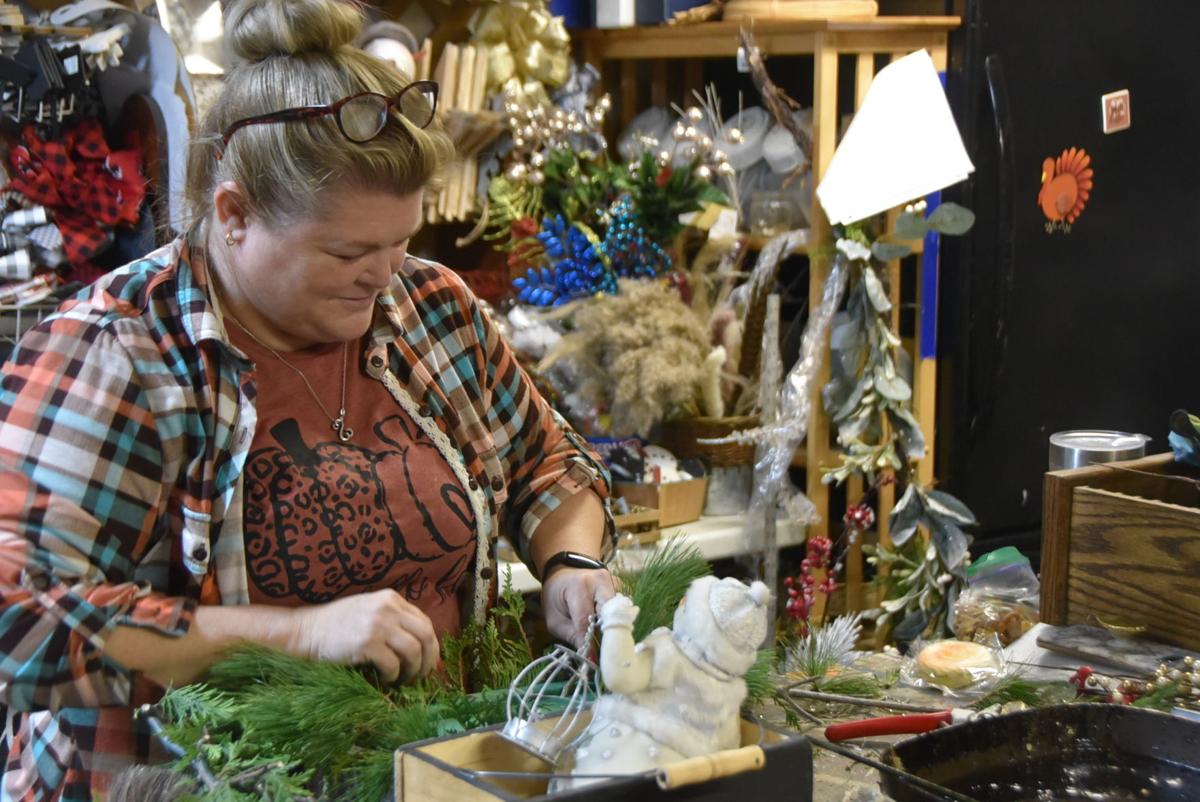 Melissa Creek works on a holiday craft to sell at the Pinecrest Tree Farm. Creek, who has worked at the farm for more than 20 years, said she especially enjoys working on custom orders. 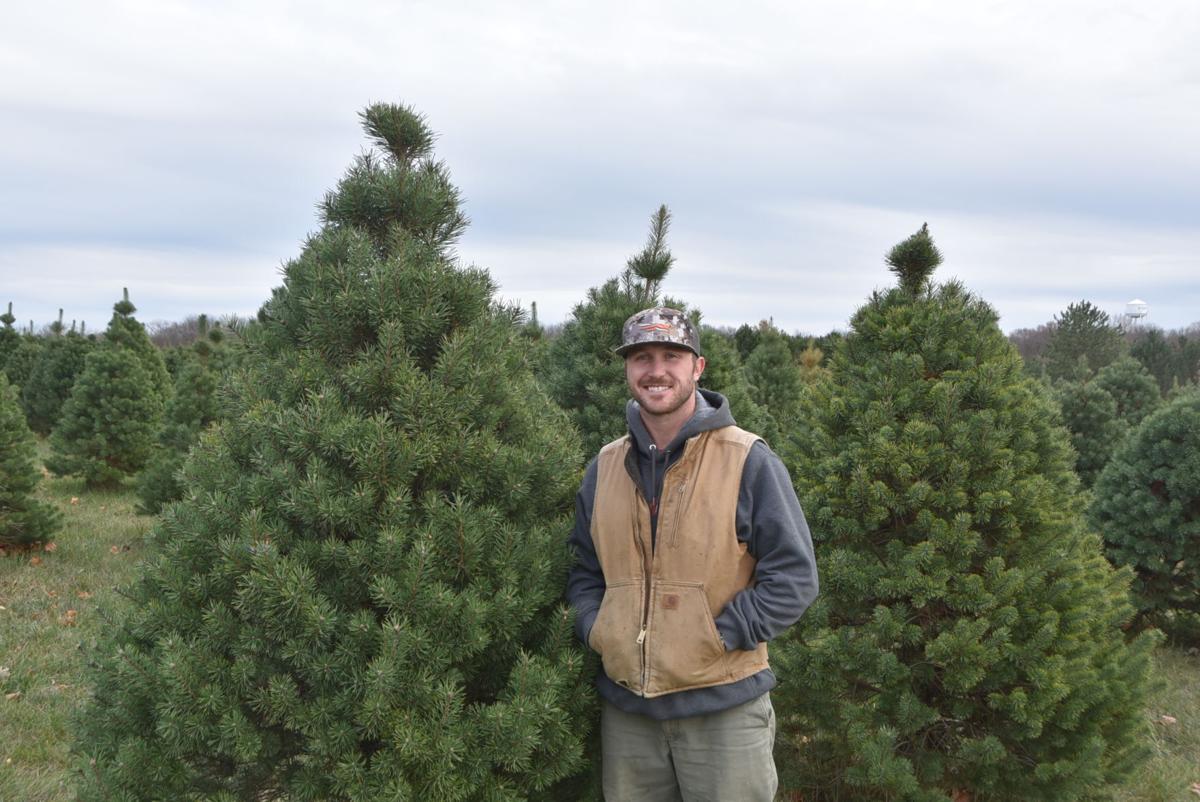 Pinecrest Tree Farm owner Craig Trump stands in a field of trees. Trump took over the farm from his parents a year ago and said he hopes to expand and change it up year by year.

Up a gravel driveway, next to a small lot for parking, stands a squat, shed-like building dressed with russet siding and a number of signs. One sign above the doorway reads “Office” and another—held by a black bear statue—“Welcome.”

Outside, the village of Blue Springs, the acres of Pinecrest Tree Farm trees that number, including seedlings, nearly 20,000 and the dull skies of autumn cold. Inside, the colors and smells of Christmas bound through the gift shop.

An electric train scoots along just under the ceiling. The backroom buzzes with Christmas music and the sounds of decoration crafting.

“We make everything from candy canes to crosses to five foot wreaths, all the way down to 12-inch wreaths,” Melissa Creek, busy at a craft table, said.

Creek has worked at the Pinecrest Tree Farm for more than 20 years now. This week, she took off time from her regular job to squeeze in extra hours at the farm. For her, it’s a labor of love.

“This is my play room. I get to play and create,” Creek said. “I work a 40-hour a week with my regular job. But I love sitting down with someone, and they pick out what they want for a ribbon and tell me kind of what they want. And then creating that and then watching their face light up when they see it because you’ve helped make their Christmas. I love that feeling.”

Gary and Cherri Trump owned the farm for 26 years. Craig Trump, their youngest son, bought the farm from them this past year. He studied exercise science at Doane University and worked a few jobs before his parents made the decision to sell the farm. He said he wanted to keep it in the family.

But he’s had a mountain to climb in his transition from worker to owner. With a pandemic that afflicted members of his family, Trump said he had to figure out a lot of things quickly.

“I was kind of thrown into the fire,” he said. “I’m so used to just being the helping hand. I have had to learn a lot about the decorating and business side of it.”

To spread people out during the pandemic and to decrease jams of people in the gift shop, the Trump family added an element to the farm where customers can pick up a tree without ever having to go into the shop. The family also added a food truck, which sells concession-style food, to that end.

From November to December 23, the farm is open every day from 9 a.m. until dark. This week is when the rush begins, Trump said.

“The village probably doubles in size with the people coming through the farm during the season,” he said.

Craig Trump, now 32, spent his early years working on the farm. He said there are elements of tree farm work people don’t tend to think about.

“I remember getting wake up calls at 7:30 asking if I was going to sleep all day,” Trump said. “I’d have to mow the lawn for four hours before getting to go to the pool. You have to shear these trees so they keep they’re shape, so we’re out during the hottest parts of summer days just shearing."

The crunch of the holidays comes with drawbacks and benefits, Trump said. He has to live a very different life than most of the people who purchase trees and decorations from the farm.

“I haven’t had a sit down Thanksgiving meal since I was 13-year-old, since I began working on the farm,” he said. “It might not be your regular sit down, you know, eating yourself into a coma, but we’re still enjoying ourselves.”

Trump said he enjoys the relationships he has with his workers and customers the most. Holiday season, from the farm's pumpkins in October to its trees in November and December, can work the staff to the bone, but he said it still brings a sense of togetherness.

“It feels like family,” he said. “When we all get together to work, it's almost like a family reunion. I wouldn’t trade it for the world.”

More than 75 community members arrived with their work gloves to pick-up trash in Adams in October as a fundraiser for the Hoffman-Ideus family.

Palmyra teacher killed in hunting accident 'was the glue' in large, loving family

Kade Reiman is being remembered as someone who lived fully and with a “fierce love” for others.

Melissa Creek works on a holiday craft to sell at the Pinecrest Tree Farm. Creek, who has worked at the farm for more than 20 years, said she especially enjoys working on custom orders.

Pinecrest Tree Farm owner Craig Trump stands in a field of trees. Trump took over the farm from his parents a year ago and said he hopes to expand and change it up year by year.