Become a Member
Read Today's E-edition
Share This
Did you get your deer, yet?
0 Comments
Share this
lnichols

I think I had 10 texts and email messages asking me this when I got back from deer camp Sunday evening. I’m sure that many of you who hunt deer have heard the same thing. Did you have a good season?

I had a great time in the field, but I did not shoot a deer during the Nebraska firearms season. To me, the firearms season is my ‘trophy’ season. I was hunting antlers! I had set a personal goal of not to pull the trigger on anything less that a 160-class buck. That didn’t happen this year.

I saw quite a few deer, and from what I’m hearing, that was better than a lot of other hunters. Deer numbers seem to be down in many areas. An EHD outbreak was worse than initially thought in the northeast part of the state. We will have to wait until all the deer seasons are done and the numbers are calculated to get a real good sense of what our deep population is right now. That will probably be available about February 2022.

I didn’t get a chance to hunt last season due to my shoulder issues. This year I was cleared to take recoil so I was anxious to get out there. One of the things I’ve experimented with the last few season is hunting with a life-size, full body whitetail buck decoy.

I’m very careful doing this because I don’t want to get shot by an over-anxious hunter. We had one fatality this hunting season due to that, and that is one too many. I only use my decoy on private ground were I’m reasonably certain that no one else is hunting. The landowner can always tell you that no one else has permission to hunt the ground, but you can never rule out poachers.

I call my decoy, Bucky. This comes from my youngest son, Isaiah. He was three at the time and was watching me practice with a 3-D archery target I had at the time. He named it, Bucky. In remembrance of him, I’ve always called my deer decoys, Bucky.

I believe in using decoys with my hunting. Most of the decoying I have done has been with doves and waterfowl and it works well. Why not decoy deer as well?

Where I’ve hunted the last few seasons, I set out Bucky next to a lake, facing a creek that runs by the spot about 80 yards away. I’m set up in a blind, across the lake about 150 yards away. I had a very similar set up the last time I hunted this spot and the dominant buck in the area came in the second morning I was in the blind. He bulled up like Arnold Schwarzenegger and came in with that stiff legged walk that dominate bucks do.

The buck went nose to nose with Bucky in a stare down. My hunting buddy and I were waiting for a fight to start. I had my rifle up, but he was directly in line with the decoy! I couldn’t shoot without hitting the decoy. The stare down lasted about a minute before the dominate buck took two steps to the east. A single shot put him down.

There are a couple of major deer travels paths through the meadow adjacent to the creek and the creek bottom, so there is generally a lot of deer moving through the area. I set Bucky up with his back hooves almost in the water and facing uphill, toward the creek. The lay of the land has Bucky in a lower spot than the surrounding ground. This means that other deer need to be about 50 yards away from Bucky before they see him.

Watching the reaction of other deer to Bucky is quite interesting! Being a biologist, I am always interested in the behavior of animals. I can learn from watching them and use the knowledge of what I learn to be a better hunter.

I was in deer camp for four days this year. During that time, I saw eight bucks, and lost track of the numbers of does I saw…probably around 10-12.

When the does spotted Bucky they would become curious or stop and then cautiously approach the decoy. It represented a new buck in the area, one they had never seen before. Most would come within a few feet of Bucky and move off when the decoy did not move. A few of the does just walked by, but kept their distance.

The interesting observations were with the young and less dominate bucks. One of the first young bucks to appear was walking along to edge of the meadow near the creek with no apparent concern. He was about 40 yards away when he noticed Bucky. He stopped in his tracks, his head snapped up high, his tail flagged and he jumped over the bank and into the creek bottom. He wanted nothing to do with Bucky.

A nice 4x4 showed up mid-morning of my second day in the blind. He looked good enough that I raised my rifle and began studying him through the scope. I eventually decided he was not the buck I wanted. He cautiously approached Bucky, but never got closer than 25-30 feet. He’d bob his head up and down, stretch his neck out as far as he could and sniff the air. After maybe 45 seconds, he walked around Bucky but maintained his 25-30 buffer zone.

Another unique 4x4 appeared! He had a good main beam, mass and symmetry, but none of his tines were longer than four inches. As soon as he spotted Bucky he dropped out of sight into the creek bottom. I hope to see him again next year. He may make a good buck!

Over the next two days in the blind I saw young buck after young buck shy away from the decoy. I am convinced that not only does a decoy work for deer, but a full-body, life-sized 4x4 decoy like Bucky separates the dominate buck from the wannabees.

I hope everyone has a Happy Thanksgiving. Take Care!

A certain local columnist is extremely interested in whether Scott Frost can right the Big Red ship, which indicates a belief it still can happen.

Steven M. Sipple: We can become callous about injuries, but Martinez's news is heartbreaker

'I feel terrible for him': Husker QB Adrian Martinez out vs. Iowa, surgery likely after right shoulder injury

Adrian Martinez’s 2021 season is over. Is his career at Nebraska finished, too? That remains an open question for the immediate future.

'This is why you come to Nebraska:' After early slide, Huskers have shot to win Big Ten title

The winner of Friday’s match between No. 5 Wisconsin and No. 11 Nebraska will clinch at least a share of the Big Ten title.

Football rivalries are provincial by nature, but those kinds of community roots are universal. In Allison, Iowa, the Chinander boys engender pride. 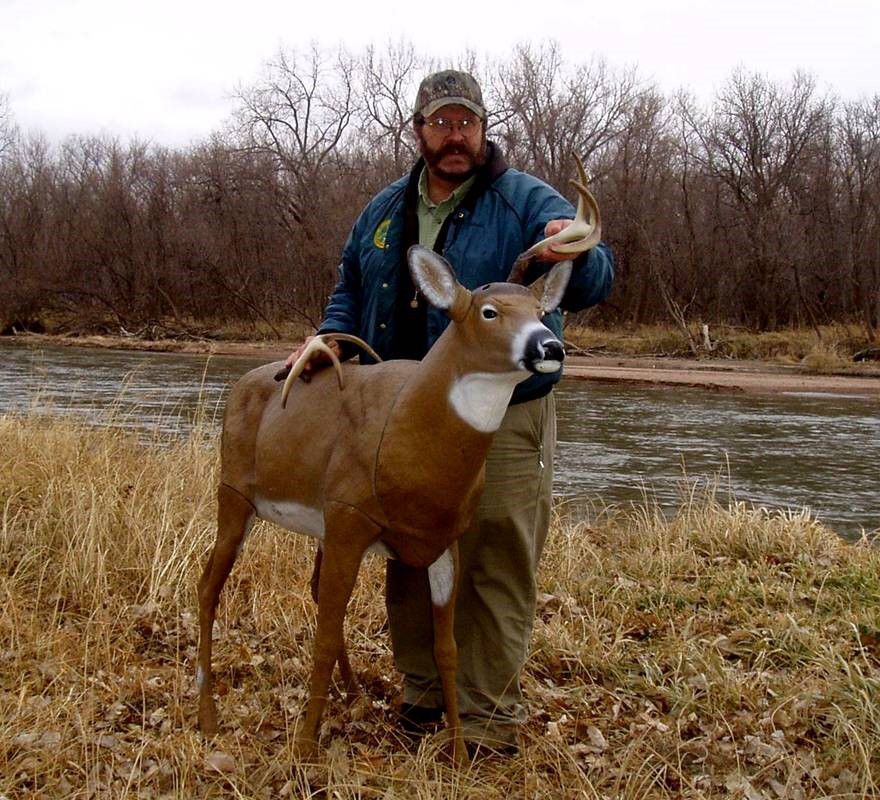 Using a full body deer decoy has some advantages. My decoys looks like a mature 4x4 whitetail buck and can be quite intimidating to younger bucks in the area. Watching and studying how deer react to my decoys is very interesting. I hope you had a good deer season and Happy Thanksgiving!