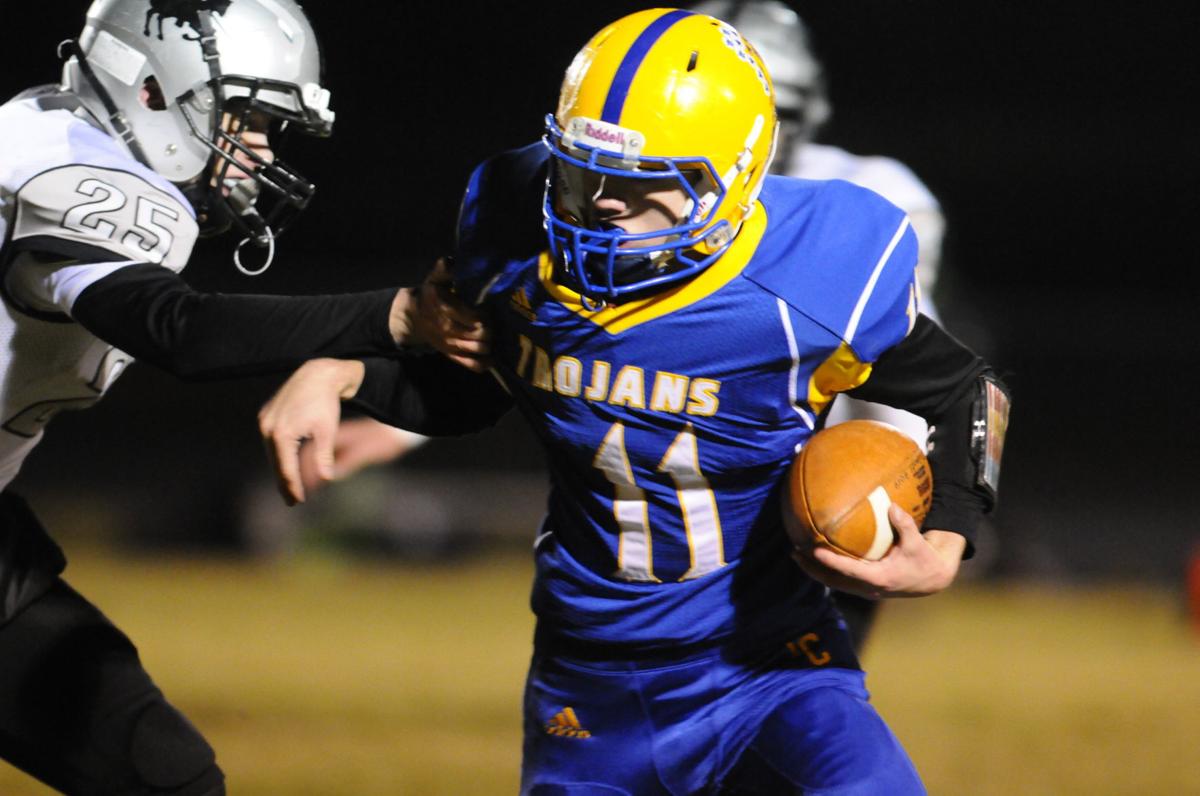 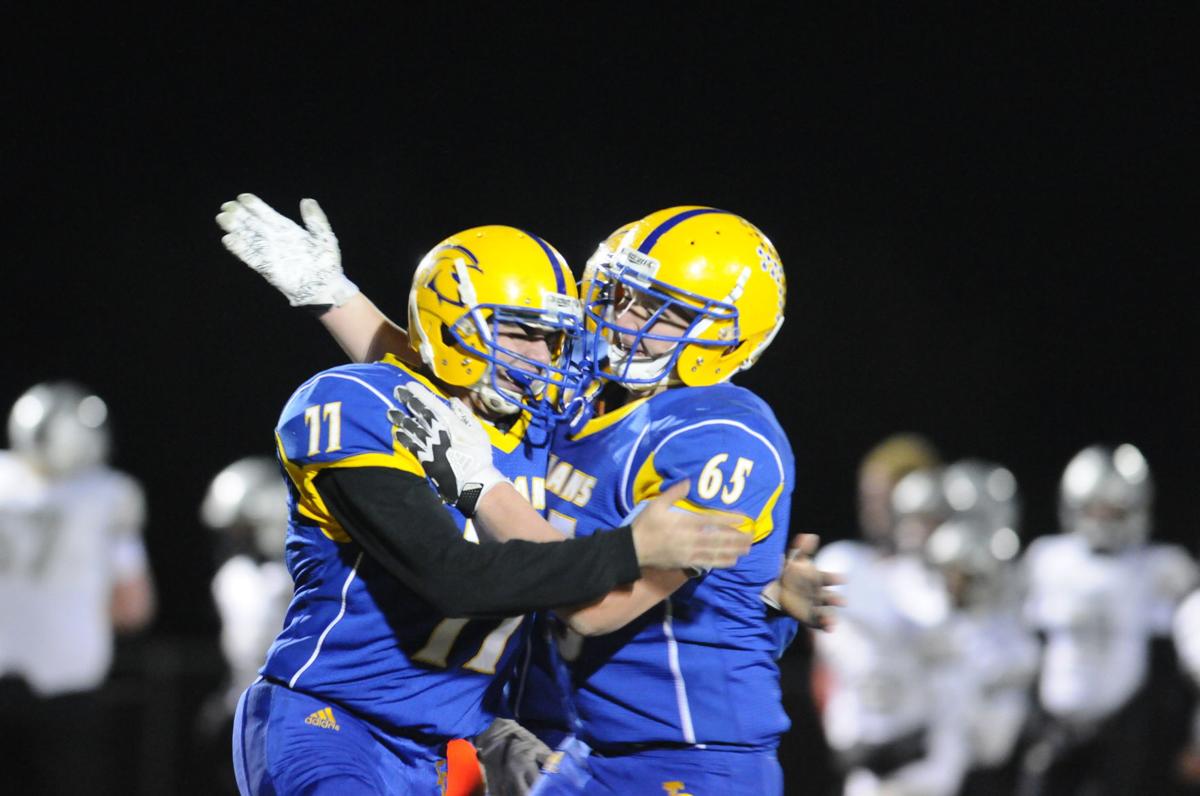 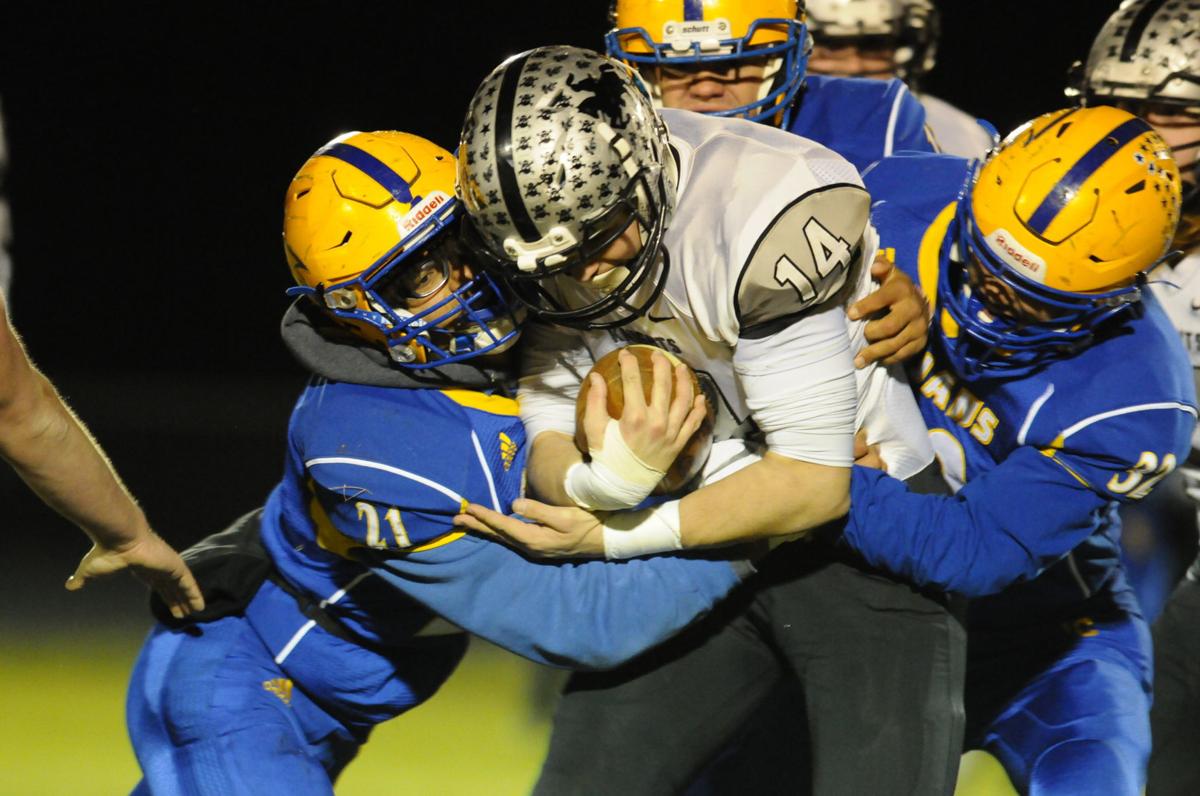 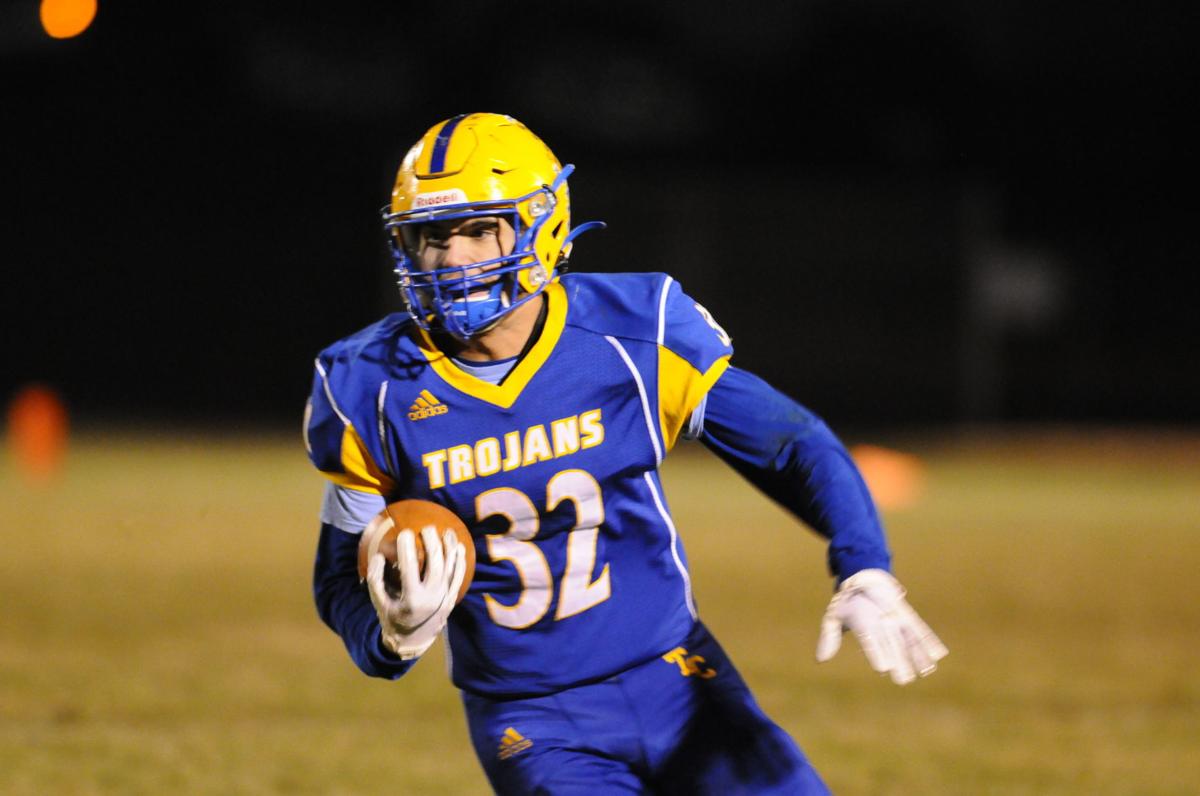 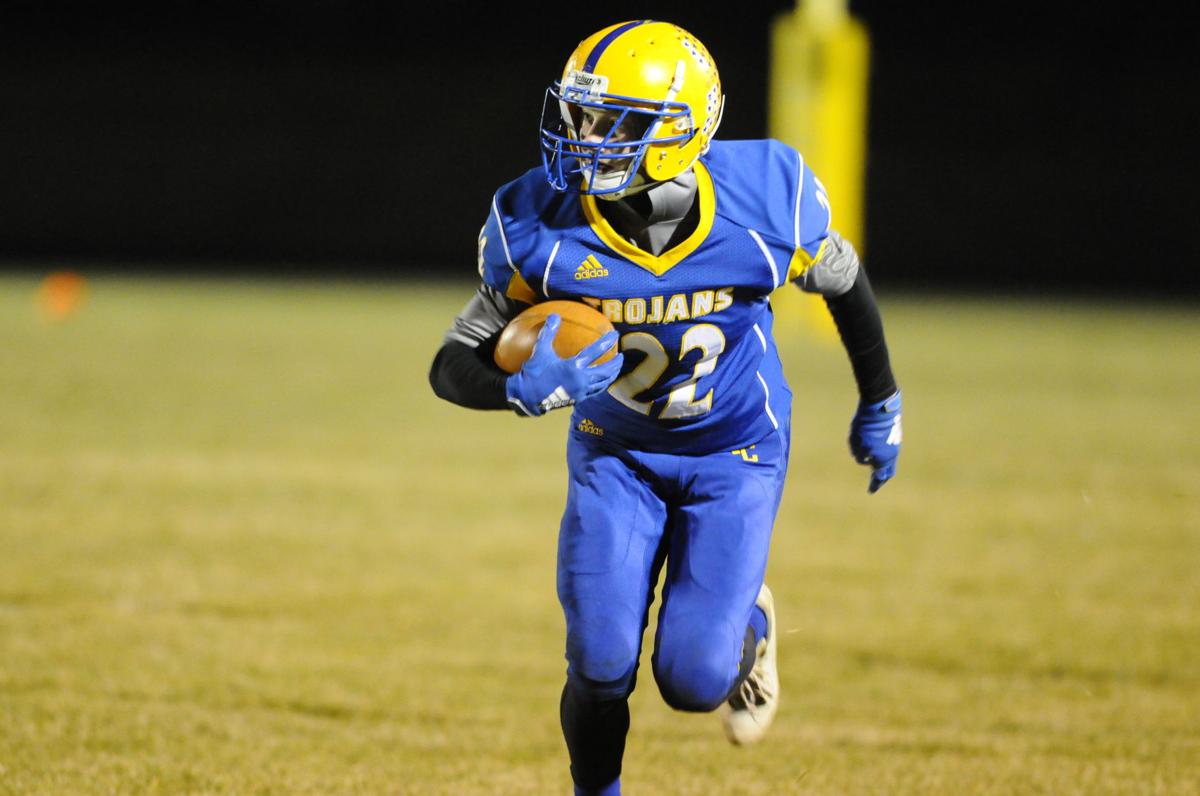 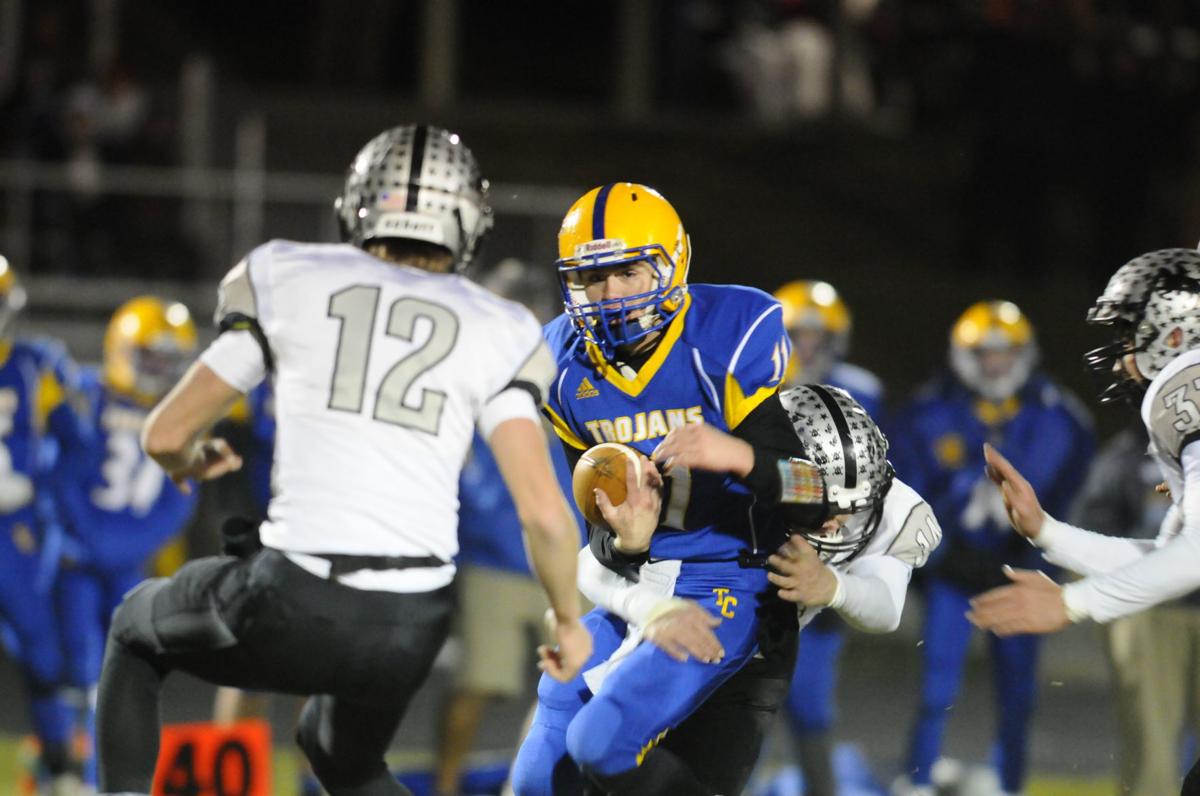 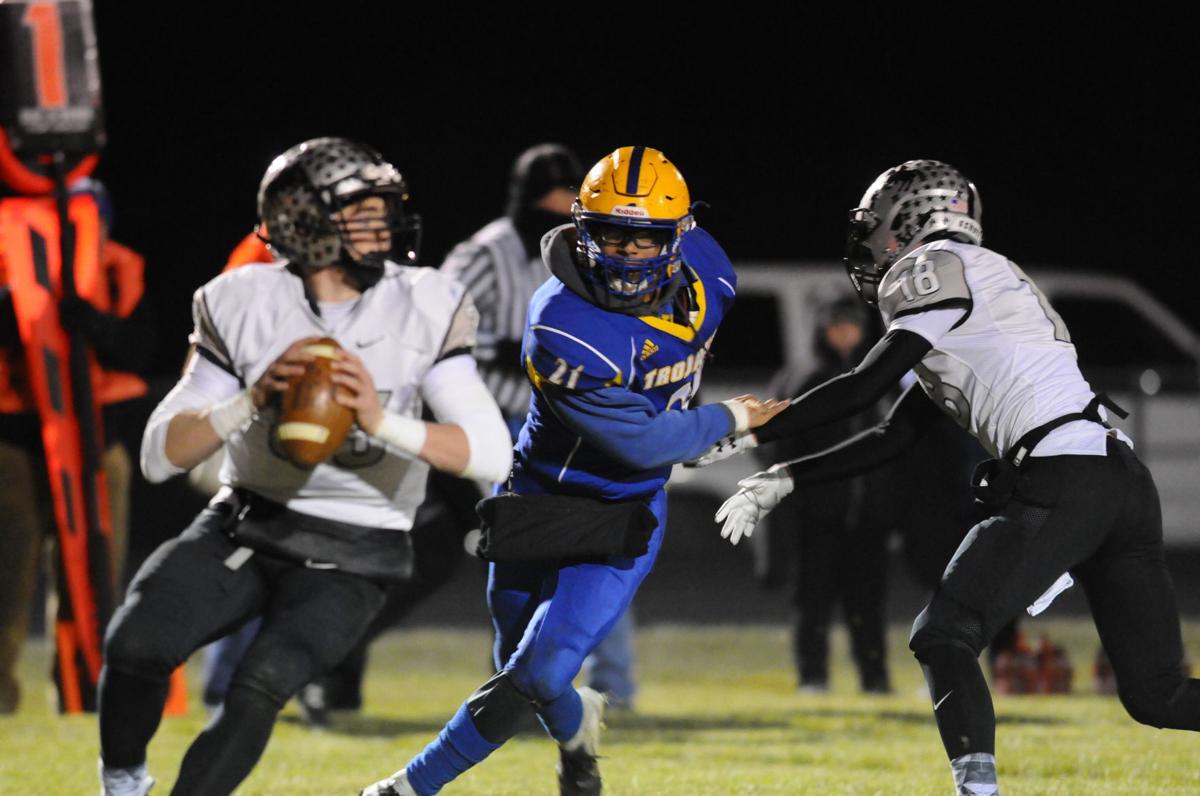 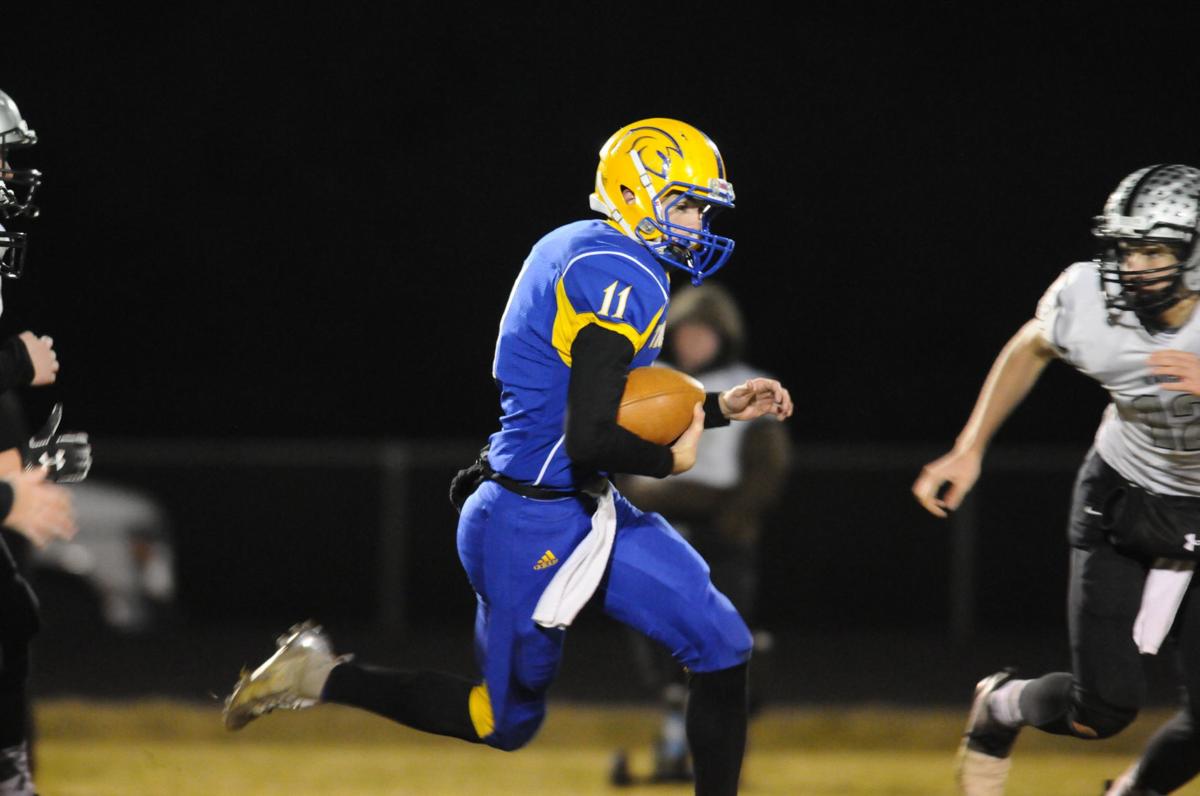 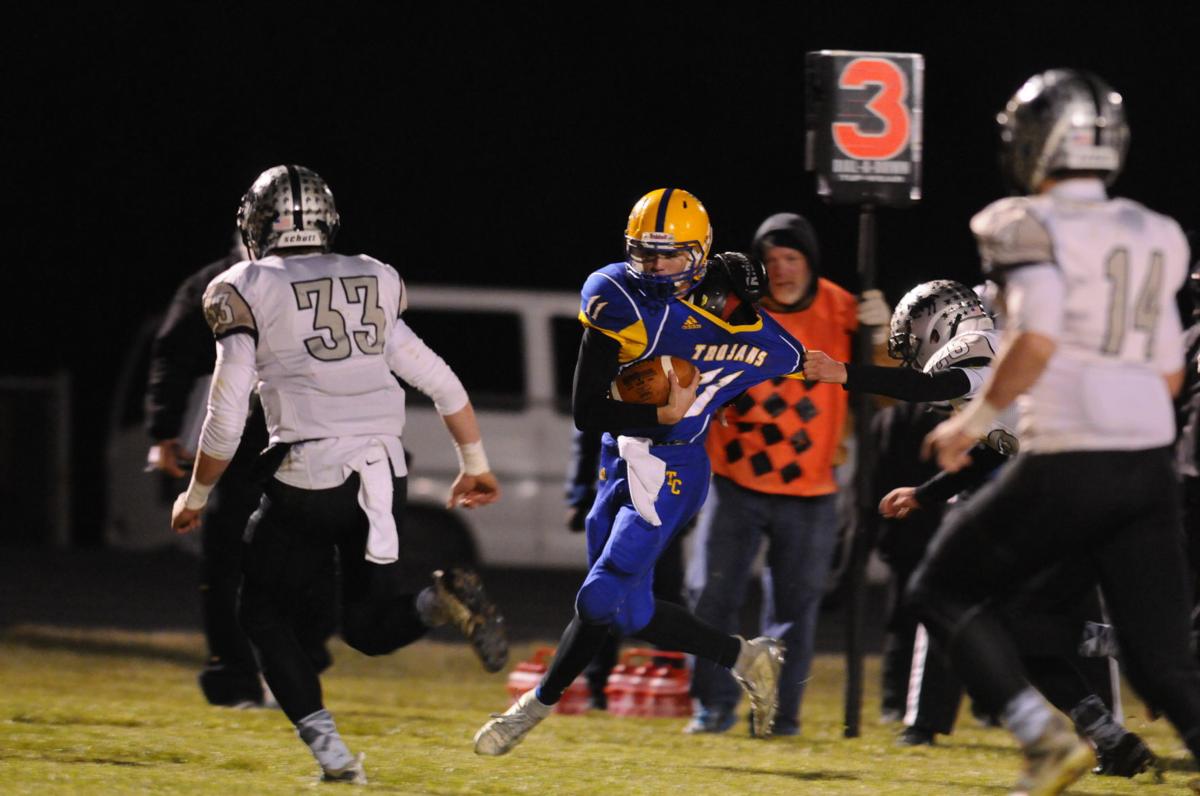 DEWITT -- Tri County entered Wednesday night's playoff game as an underdog but they walked away looking like a Class D1 powerhouse.

The 11th-seeded Trojans dismantled third-seeded Elmwood-Murdock 68-8 in DeWitt to advance in the Class D1 playoffs.

The game was never in doubt. The Trojan defense forced the Knights into a three-and-out on their first drive and then Cole Siems took the Trojan first play from scrimmage 68 yards for a touchdown.

Drew Garrison scored the two pointer to make it 8-0 and Tri County would never look back.

Elmwood-Murdock went three and out on their next drive and Tri County took over at their own 35 yard line. The Trojans put together a six play scoring drive that was capped by Drew Garrison's eight yard touchdown run to make it 14-0. Dominic Smith had a 21 yard run during the drive.

The Knights started their next drive at their own 25 yard line and put together their most impressive drive of the game, but on the 16th play of the drive, they fumbled and Tri County's Brett Boyce scooped it up and rumbled all the way down to the Elmwood-Murdock 8 yard line.

One play later, Siems ran it in from eight yards out and then scored the two point conversion to make it 22-0.

The Knights took their next drive to midfield again, but another fumble was recovered by Bailey Waltke, giving the ball back to Tri County at the Elmwood-Murdock 33 yard line.

A 10 yard pass from Siems to Grant Lewandowski and a 13 yard run by Garrison set up a three yard touchdown run by Siems. Siems then found Lucas Weise for the two point conversion to make it 30-0.

On Elmwood-Murdock's first play of their next drive, Tri County's Brandon Sieboldt came down with an interception.

The Knights defense finally got a stop against the Trojan offense, but their offense also went three and out. Tri County blocked the ensuing punt and the Trojans recovered at the Knight 2 yard line.

Siems then ran it into the end zone on the first play before finding Weise on the two pointer to make it 38-0. Siems would score one more touchdown before half time to make it 46-0 at the half.

The second half was just a formality as the running clock rule was implemented. Siems put the game away by taking the first play of the half 60 yards for a touchdown. Garrison scored the two pointer to make it 54-0.

Elmwood-Murdock fumbled the ball back to Tri County and Siems would score again from 31 yards out to make it 60-0.

Jack Holsing added one more touchdown run and Garrison scored the two pointer to make it 68-0.

The Knights would finally get on the scoreboard with a touchdown late in the fourth quarter to make the final score 68-8.

The Trojans advance to the third round where they'll play Cross County, who pulled off an upset of their own. Cross County is the seventh seed in Class D1 and they knocked off second-seeded Bruning-Davenport-Shickley 20-6.

Tri County will play at Cross County on Tuesday. The time of that kickoff is yet to be determined.

KEARNEY -- After months of fear and uncertainty due to the COVID-19 virus, Nebraska high school football players finally got a sense of normal…

'You can sense it. You can feel it.' A closer look at the Bears quarterback competition and the dynamics for 2020

Dwayne 'The Rock' Johnson and partners buy XFL for $15 million

The Rock is now an owner of the XFL. Actor and former professional wrestler Dwayne Johnson has teamed with business partner Dany Garcia and RedBird Capital, a private investment firm run by former Goldman Sachs executive Gerry Cardinale, to buy the spring football league that filed for bankruptcy in April. The partnership has acquired XFL parent company Alpha Entertainment LLC for $15 million ...

Omar Kelly: Sports like football provide a chance for us to regain some normalcy during COVID-19 pandemic

Football should be the easy part. It is a sport. It is entertainment. It's a game that's supposed to bring joy, and relief from life's stresses, right? Returning to some semblance of normalcy in this global pandemic caused by the continuous spread of the novel coronavirus, and doing it in the midst of a chaotic economy, and with a side order of race-relations issues and a social justice ...