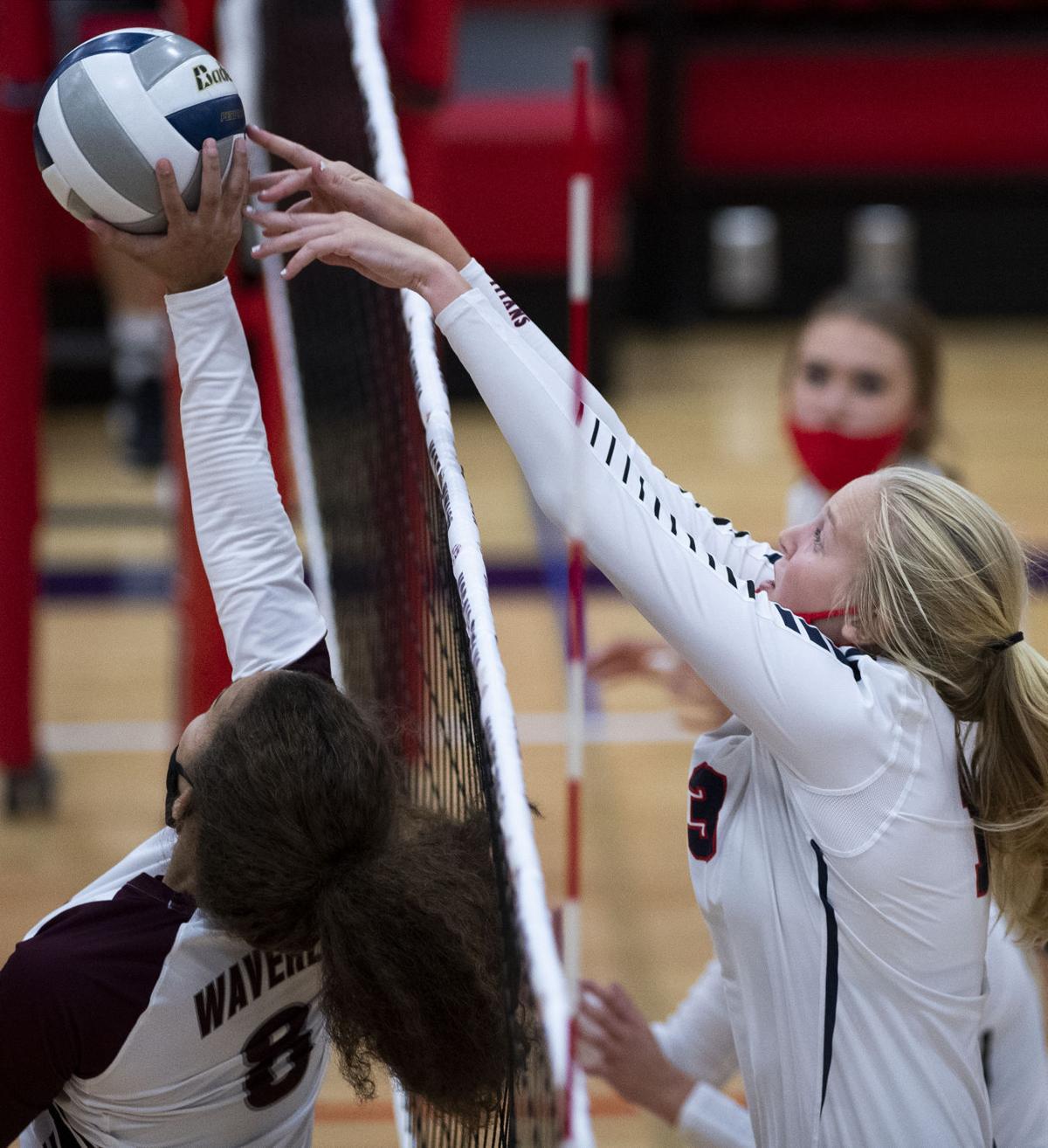 Norris' Ella Waters (right) reaches for the ball against Waverly's Hannah Allick (8) in the fifth set on Tuesday, Sept. 15, 2020, at Norris Middle School. 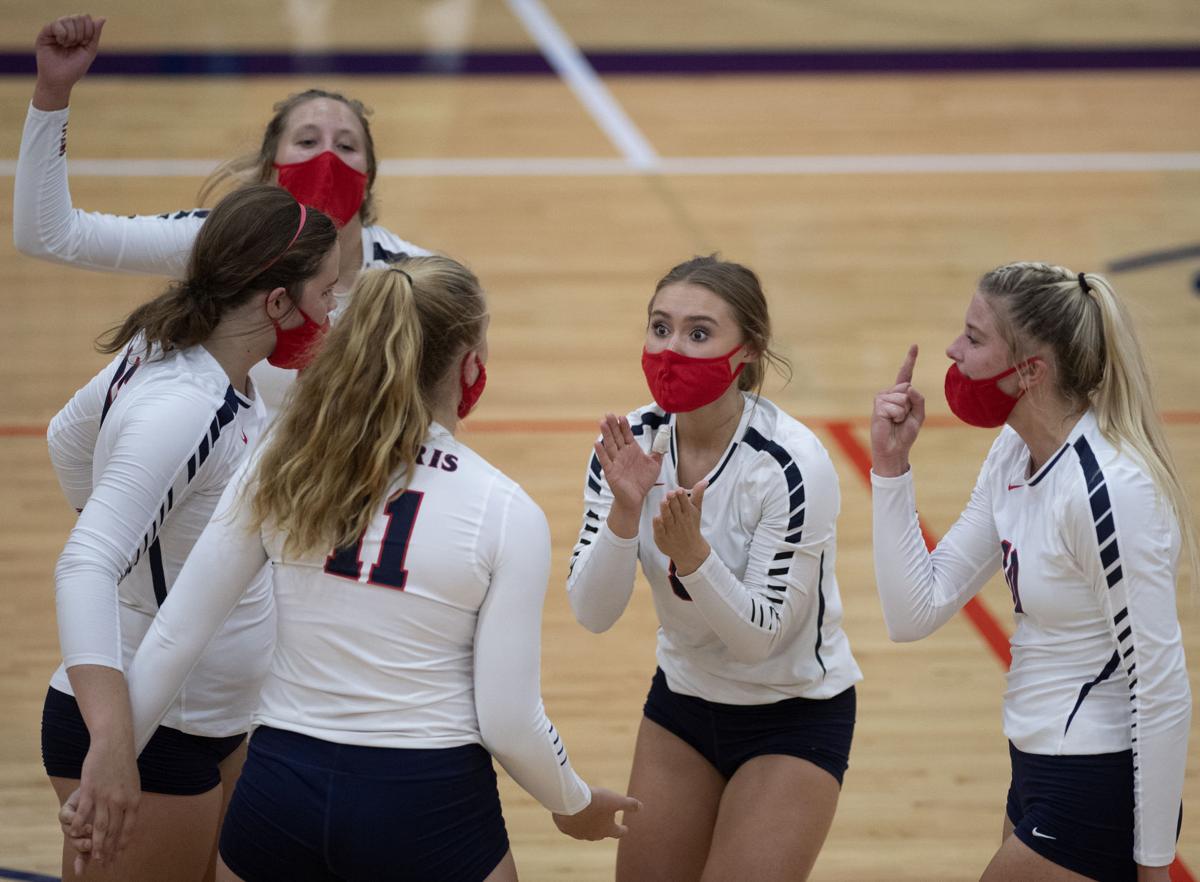 Norris' Maisie Boesiger (second right) leads her teammates in celebration of a point scored by Gracie Kircher (11) in the first set against Waverly on Tuesday, Sept. 15, 2020, at Norris Middle School.

FIRTH — Tuesday night’s match between two of the best teams in Class B seemed destined for five sets from the start, and it did not disappoint.

“I can’t remember the last time we played Norris and it didn’t go five…,” Waverly head coach Terri Neujahr said. “It’s a bit of a love-hate relationship because we love to play each other and hate it when we lose but love it when we win.”

“Every time we play each other it’s a barn burner, so we kind of expected that but it was really nice to come out on top,” Norris head coach Christina Boesiger said.

The first set established the tone for the entire match as Waverly and Norris traded points until Ella Waters’ eighth kill of the set gave Norris a 29-27 win and a 1-0 lead.

Waverly brought added focus to the second set as its block provided a spark defensively. Waverly middles Bekka Allick and Taylor Kudym helped the Vikings outblock Norris 14-8 in the whole match, and Allick added some offense to even the match 1-1.

With its offense shut down in the second set, Norris adjusted to avoid Waverly’s middles and create one-on-one matchups for its outside hitters. The Titans roared out to a 17-7 lead and collected an easy third-set victory.

The Titans had a chance to end the match without going five, leading 22-19 in the fourth set, but Allick and Whitney Lauenstein both thumped powerful kills to keep the Vikings in it.

Lauenstein led all players with 19 kills and Allick added 12, but they were unable to break through in the fifth set.

“We had some swings at the end that weren’t necessarily smart swings because we were out of system,” Neujahr said. “We make a couple different decisions about what to do with the ball and maybe things turn out differently for us.”

Meanwhile, Norris had three players finish with double-digit kills, and they all contributed during the fifth set. Ella Waters led the Titans with 18 kills, Sydney Jelinek had 12 and Kalli Kroeker’s match-winning kill gave her 14.

While the two Eastern Midlands Conference opponents play every year, this was the first time Norris’ seniors had defeated Waverly in a regular-season match. It was a tight contest as usual, but such is the nature of a Waverly-Norris matchup.

“We took good care of the ball on our side and these girls played with heart,” Boesiger said. “Waverly did too, and it was a great game all around.”

The Lady O falls to 7-3 on the season and will be in action again on Thursday when they host Millard South.

Wahho remains undefeated at 8-0 on the season.

The Southern Lady Raiders felt they had a good enough team to compete in the MUDECAS A Division this year.

Southern and Humboldt-Table Rock-Steinauer will play for the MUDECAS Girls B Division Championship on Friday.

Parkview Christian kept their undefeated season alive with a win on Saturday in the MUDECAS A Division Championship.

The MUDECAS semifinal game between Freeman and Parkview Christian looked poised to go to overtime Thursday night, but Mark Lual had other plans.

Class B No. 2 ranked Beatrice won a dual against Class B No. 4 ranked Nebraska City Thursday night.

Snowy weather forced the postponement of all the girls MUDECAS games on Friday.

The Palmyra Panthers were the sixth seed going into the MUDECAS B Division Tournament, but they walked out champions.

The Beatrice Coop boys and girls swimming teams both came away with wins in a dual against Columbus.

Norris' Ella Waters (right) reaches for the ball against Waverly's Hannah Allick (8) in the fifth set on Tuesday, Sept. 15, 2020, at Norris Middle School.

Norris' Maisie Boesiger (second right) leads her teammates in celebration of a point scored by Gracie Kircher (11) in the first set against Waverly on Tuesday, Sept. 15, 2020, at Norris Middle School.