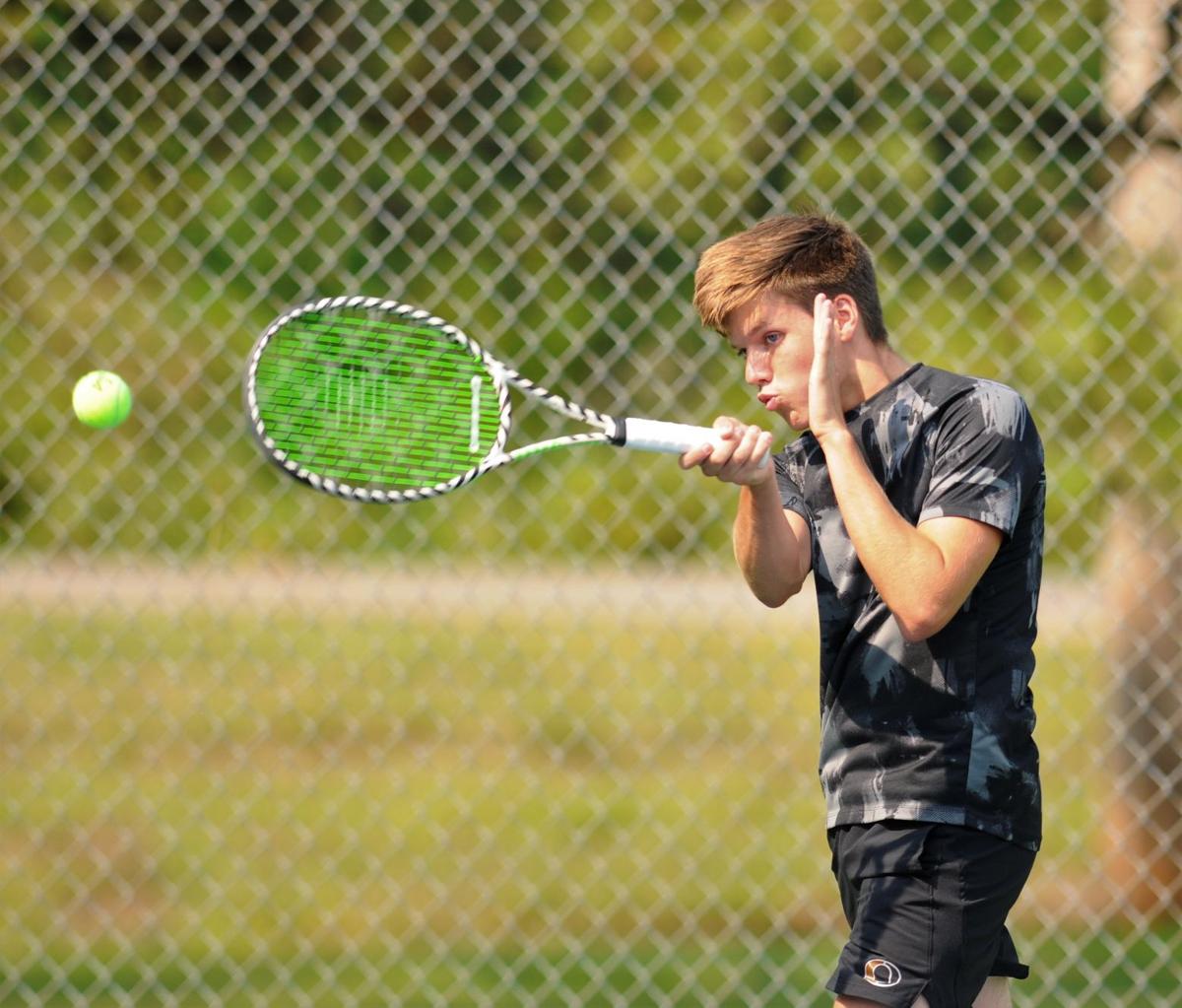 In this Daily Sun file photos, Ty Dittbrenner competes in a dual at Hannibal Park in Beatrice. 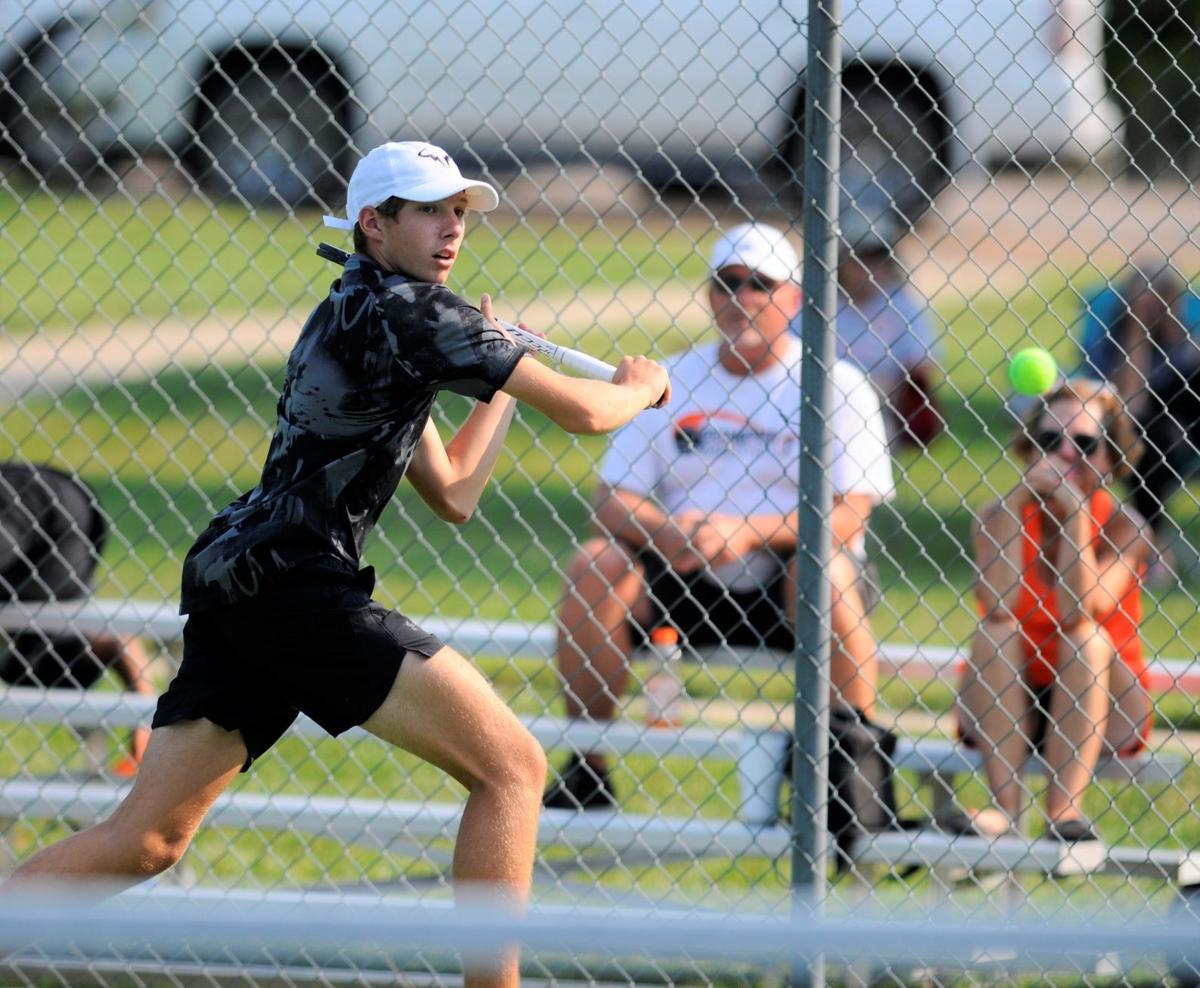 In this Daily Sun file photo, Carson Saathoff competes in a dual at Hannibal Park in Beatrice.

The Beatrice boys tennis team hosted Brownell Talbot/Concordia and Omaha Roncalli Monday in a triangular at Hannibal Park in Beatrice.

The Orangemen used the contest to try some new combinations and a change in rank order. Several kids were given a nod for a varsity match.

Picking up wins for Beatrice included Jacoby Hamm going 1-1 on the day in No. 1 singles action. He defeated Roncalli 8-5, but fell to BTC 8-4.

Conner Bruner picked up two wins at No. 4 singles. He won the first match 8-3 and the second match 8-4.

Tag DeBoer won 8-1 over his Omaha Roncalli opponent at No. 5 singles while Jordan Zhang won 8-3 over BTC at No. 5 singles. At No. 6 singles, Nolan Marlatt went 1-1 on the day, winning his match over Roncalli 8-5.

In doubles matches, the No. 3 team of Nolan Marlatt and Maddox DeBoer picked up a win over BTC 9-7.

"These two found a way to win after a tough outing in York on Friday," said Beatrice Coach Karen Dittbrenner. "I was pleased to see them come back and fight for a win."

Roncalli's No. 3 doubles team did not compete after one of their players suffered an injury in singles action.

Conner Bruner and Tag DeBoer went 1-1 on the day at No. 2 doubles, defeating BTC 8-4. At No. 1 doubles, Ty Dittbrenner paired with Carson Saathoff to defeat BTC 8-3. He then paired with Michael Roschewski, who was making his varsity debut, to defeat Roncalli 8-4.

"I was especially pleased with how Michael stepped in and played smart and confident, especially in the service game," Dittbrenner said. "He did a great job and took advantage of the opportunity."

"This was good to see after Carson was unable to compete for several days this last week," Dittbrenner said.

"Ty's matches are not always pretty or by the book, but he competes each time out and generally finds a way to win," said Karen Dittbrenner.

The Orangemen will be in action again on Thursday when Nebraska City comes to town. Beatrice will be honoring the senior tennis players before the matches start. On Saturday, the Orangemenw ill travel to South Sioux City to compete in the South Sioux City Invite.

Is Sean Payton an early frontrunner for Coach of the Year?

The two-time defending state volleyball champion Diller-Odell Griffins got swept at home by Falls City Sacred Heart a few weeks ago, but they …

Orangemen knock off Blair on homecoming

It was a memorable homecoming night for Beatrice Friday night at the House of Orange.

The Meridian and Sterling volleyball teams fell in their opening match of the 2021 MUDECAS Volleyball Tournament.

The Freeman Lady Falcons claimed the MUDECAS B Division Championship Thursday night at the Truman Center in Beatrice.

Freeman beats Southern to improve to 3-0

In a warm humid night at Falcon Field the 20th anniversary of the 9/11 terrorist attacks were recognized in pregame ceremonies. The Burrow-Deb…

Bruning-Davenport-Shickley powered their way past Diller-Odell Thursday night to claim the MUDECAS A Division Championship.

No. 1 Norris beats No. 3 Waverly to remain unbeaten

WAVERLY — As its spotless record indicates, the Norris volleyball team has been superb this season.

In this Daily Sun file photos, Ty Dittbrenner competes in a dual at Hannibal Park in Beatrice.

In this Daily Sun file photo, Carson Saathoff competes in a dual at Hannibal Park in Beatrice.