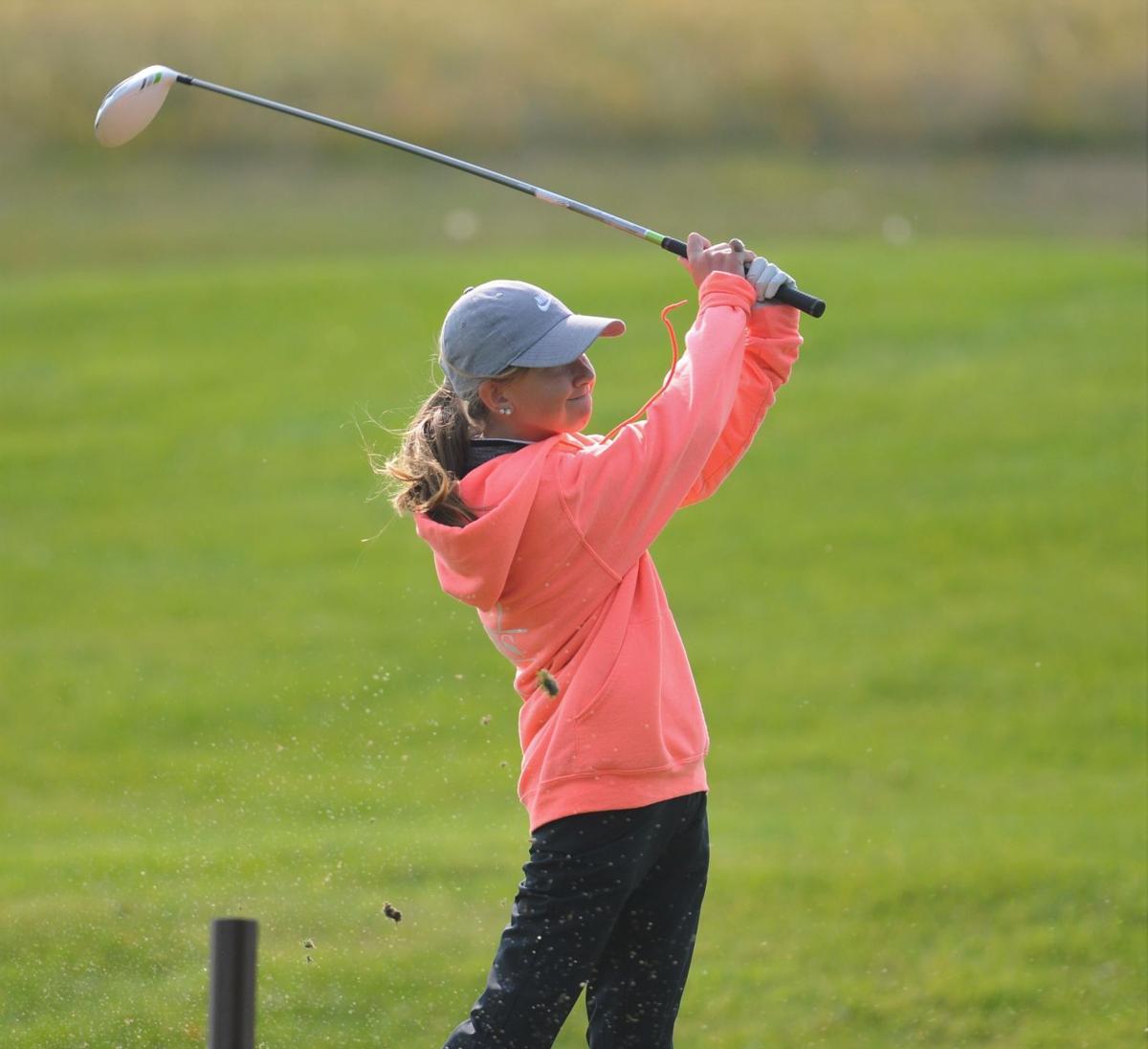 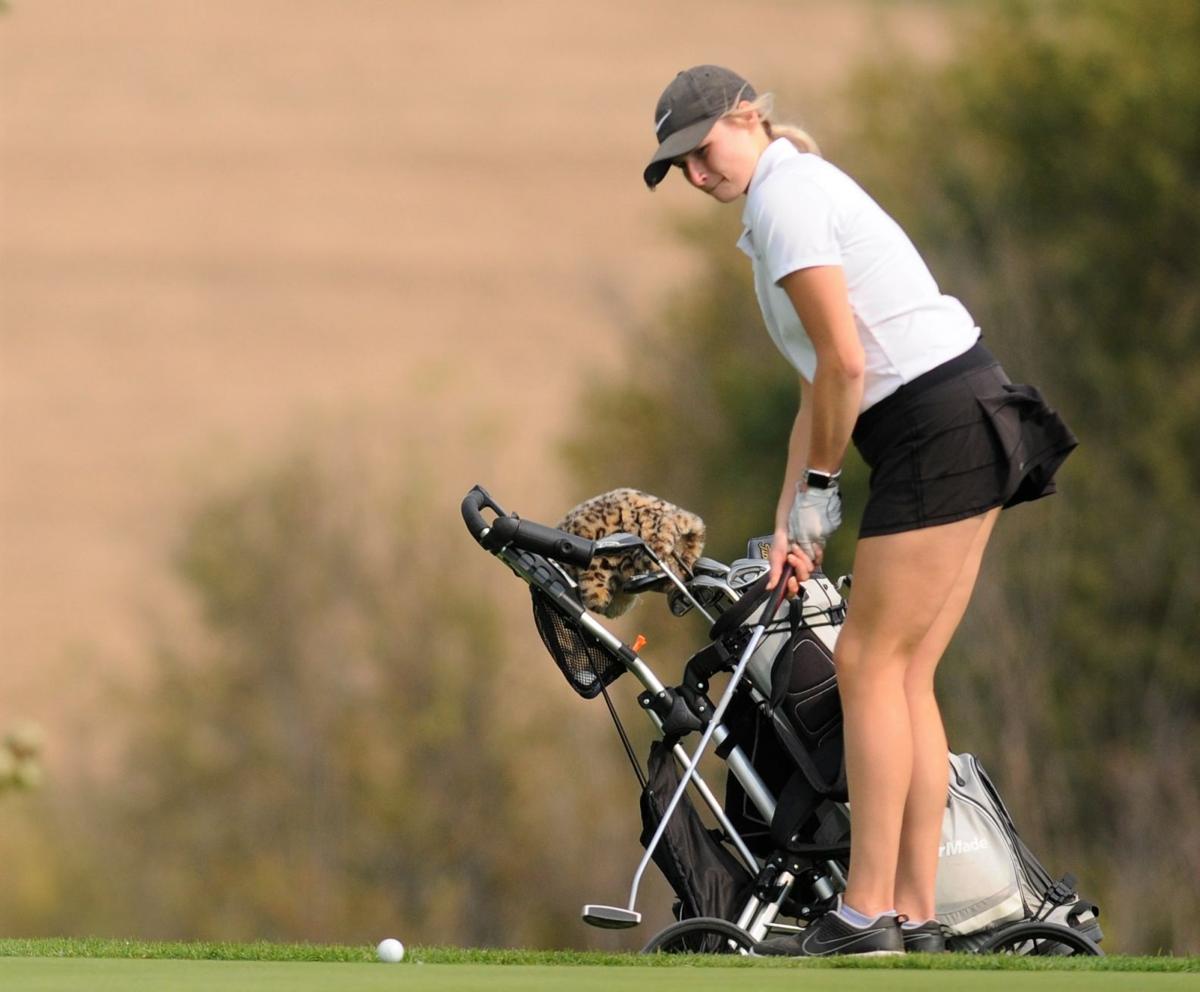 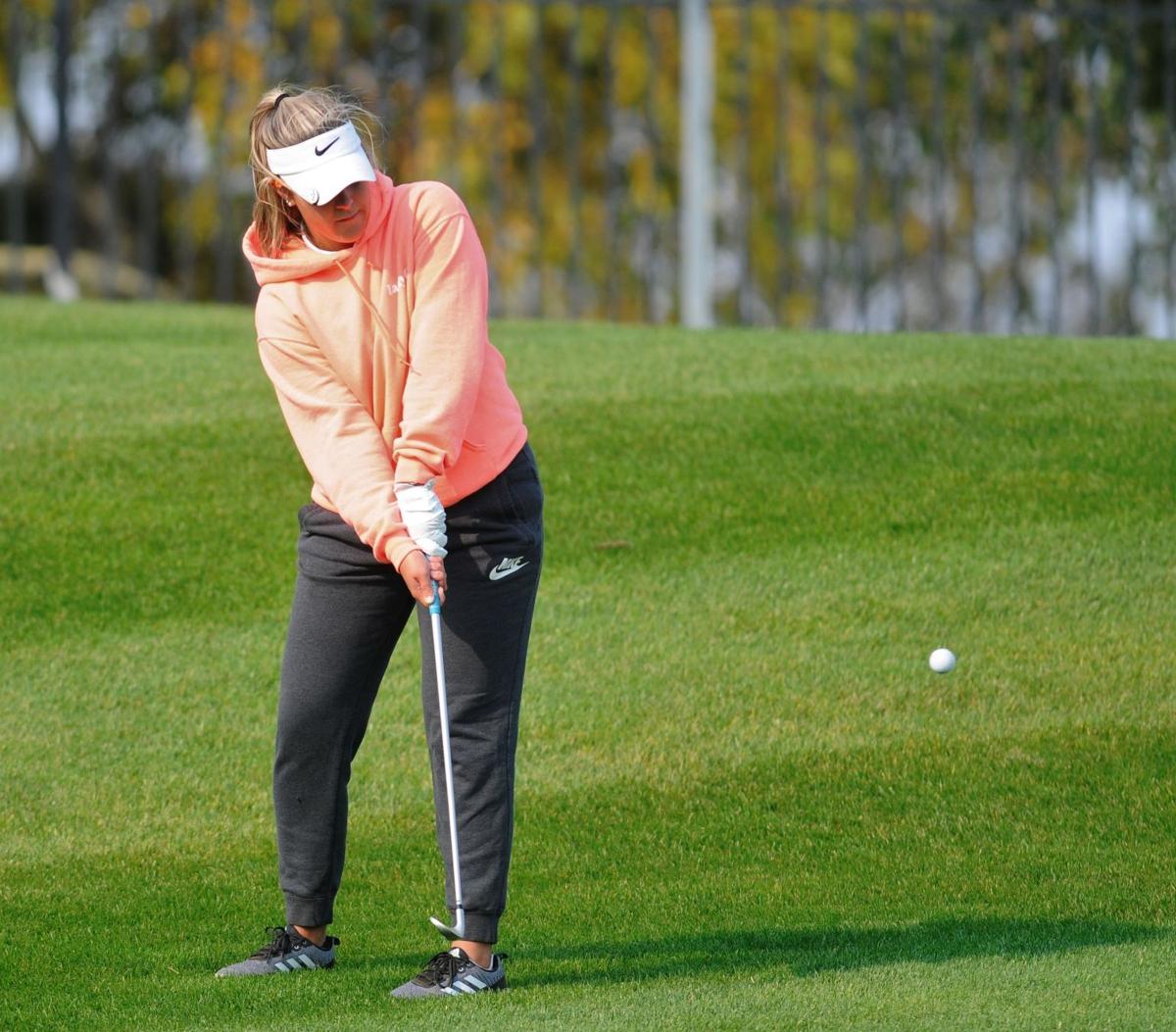 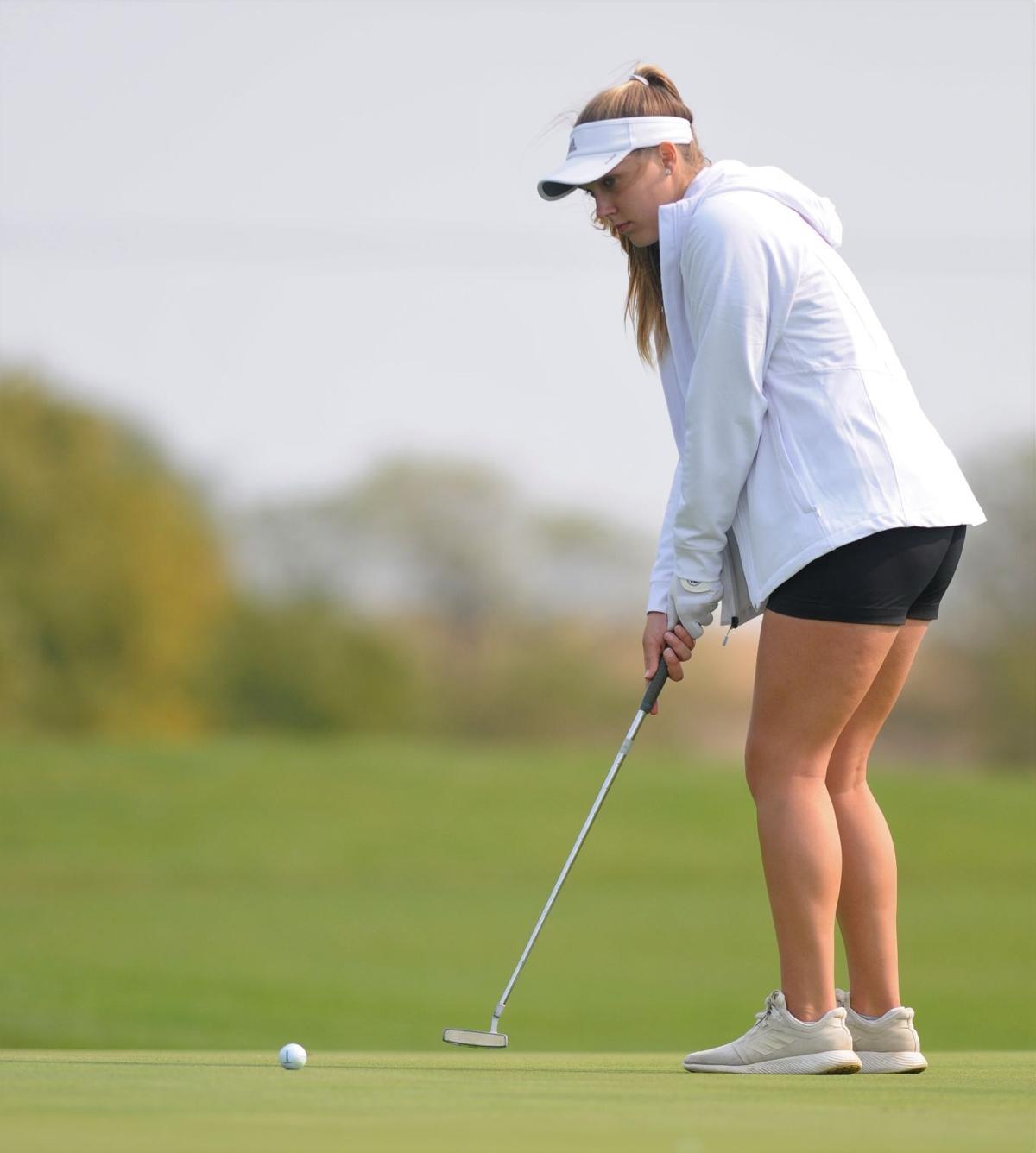 In this Daily Sun file photo, Makenna Parde watches her putt during the district tournament at Table Creek Golf Course in Nebraska City. 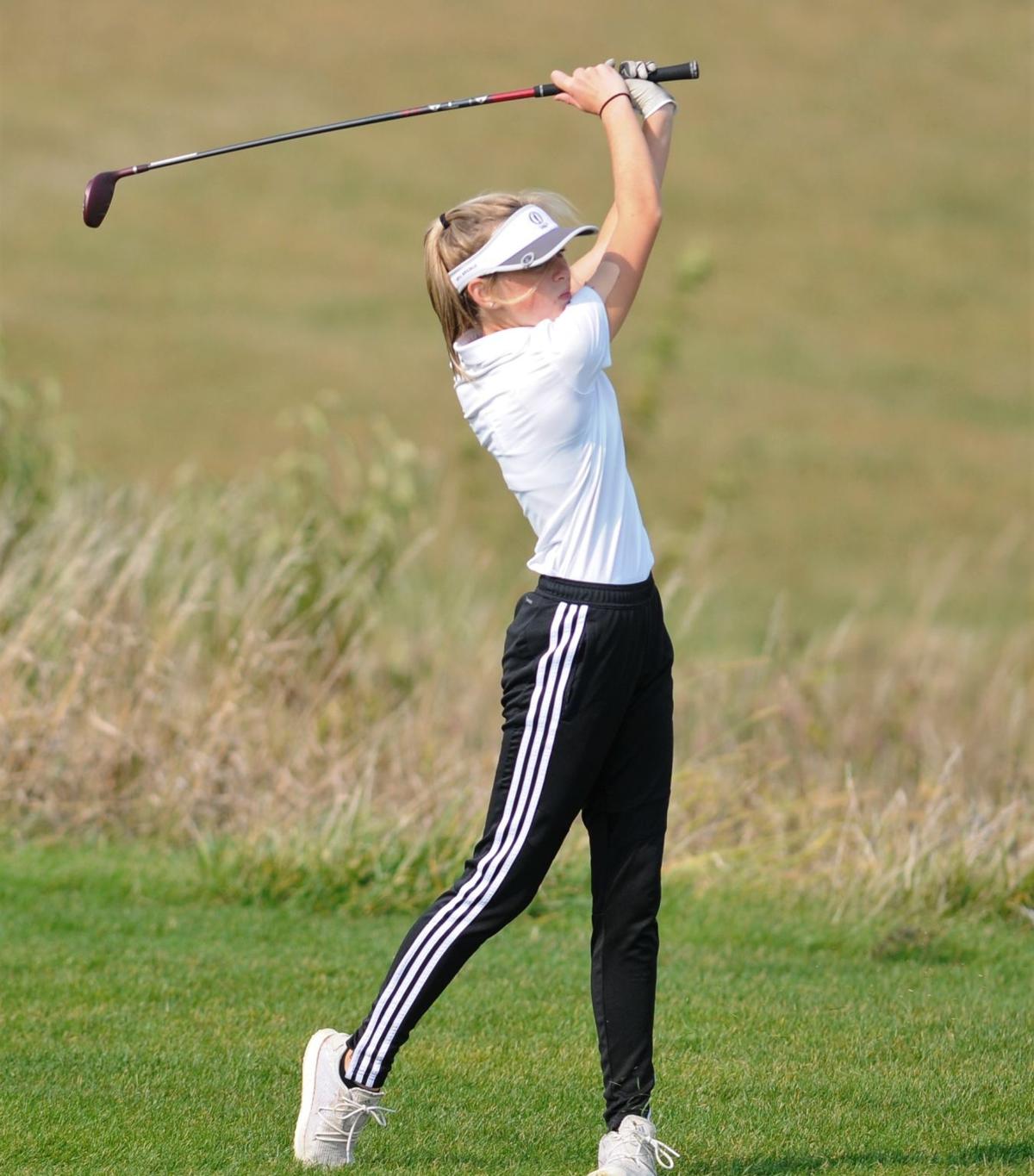 In this Daily Sun file photo, Paige Southwick watches her shot during the district tournament at Table Creek Golf Course in Nebraska City.

Beatrice is currently in 11th place with a first day score of 445 in windy conditions.

Beatrice coach Dick Stuart doesn't like to use wind as an excuse, but admitted it created a challenge.

"It was windy," Stuart said. "There were occasional gusts of 40 miles per hour and there were two or three holes where you could putt it up by the hole and if a wind gust came up, it could come back to your feet or even behind you."

Stuart said while the wind was difficult to contend with, he had hoped his team would have managed it better.

"The wind was a big part of our problems today, but everybody played in the same weather," Stuart said. "We didn't get through it the way we hoped we would, but we get a chance to tee it up again tomorrow and we'll see what happens."

Kiera Paquette led the way for the Lady O. She shot a 49 on the front nine and a 51 on the back nine for an even 100. That ties her for 19th place individually.

"Kiera was competitive today," Stuart said. "She was very competitive on the front nine, but just wore out on the back nine. She was well on her way to keeping her score in the 90s, but the last hole kind of got away from her."

Blake Trusty was Beatrice's next best finisher. She shot a 49 on the front nine and a 61 on the back nine for a 110 which puts her in 36th place.

"Blake played well, she just had a tough three hole stretch," Stuart said. "She struck the ball as well as she has all year and actually, the rest of the team struck it well to, we just struggled around the greens."

"Both Makenna Parde and Makenna Hutt had shots they'd like to have back," Stuart said. "They just had a few holes that got away from them."

Paige Southwick rounded out the Lady O scoring with a 59 on the front nine and a 68 on the back nine for a 127.

"Paige had trouble on the front, but played much better on the back," Stuart said.

Julia Karmazin is in first place in Class B with a first round score of 77. She's four strokes better than Anna Kelley of Scottsbluff.

The Class B State meet will conclude on Tuesday. Stuart said they hope to move up in the standings.

"Last year we were in 12th place after the first day and found a way to get into the top 10," Stuart said. "That is our goal again this year. We just have to be mentally stronger tomorrow and work our way up the ladder."

Lynzi Becker of Cozad and Abbigail Brodersen of Boone Central are currently tied for first in Class C. They both shot a 77, which is five strokes better than the next best golfers.

The Class C State Meet will also resume on Tuesday.

Diller-Odell was dealt their first loss of the season in the championship match of the Pioneer Conference Tournament.

The Beatrice football team guaranteed themselves a spot in the Class B State Playoffs with a win over Crete Friday night.

The Beatrice volleyball team wrapped up their regular season with a four set win over Nebraska City on Thursday.

Norris comes from behind to beat Lincoln Lutheran

While some teams might panic when falling behind 1-0 in a three-set match, the Norris Titans are right at home.

Norris falls to Waverly in Class B bout

WAVERLY — Nearly from the beginning, Waverly’s defense set the tone.

Wilber-Clatonia has faced adversity before, losing a pair of games to COVID-19 earlier in the season.

ODELL -- The Diller-Odell Lady Griffins can't defend their Class D1 State Volleyball Championship from a year ago, but they do have their eyes…

When Cooper Hausmann was growing up, he knew he had to improvise every time he found his older brother, Ashton, on the other side of the football.

In this Daily Sun file photo, Makenna Parde watches her putt during the district tournament at Table Creek Golf Course in Nebraska City.

In this Daily Sun file photo, Paige Southwick watches her shot during the district tournament at Table Creek Golf Course in Nebraska City.