Become a Member
Read Today's E-edition
Share This
'You got to have that fight': Huskers force winner-take-all regional final with gritty win over No. 1 Arkansas
0 Comments
Share this
1 of 2 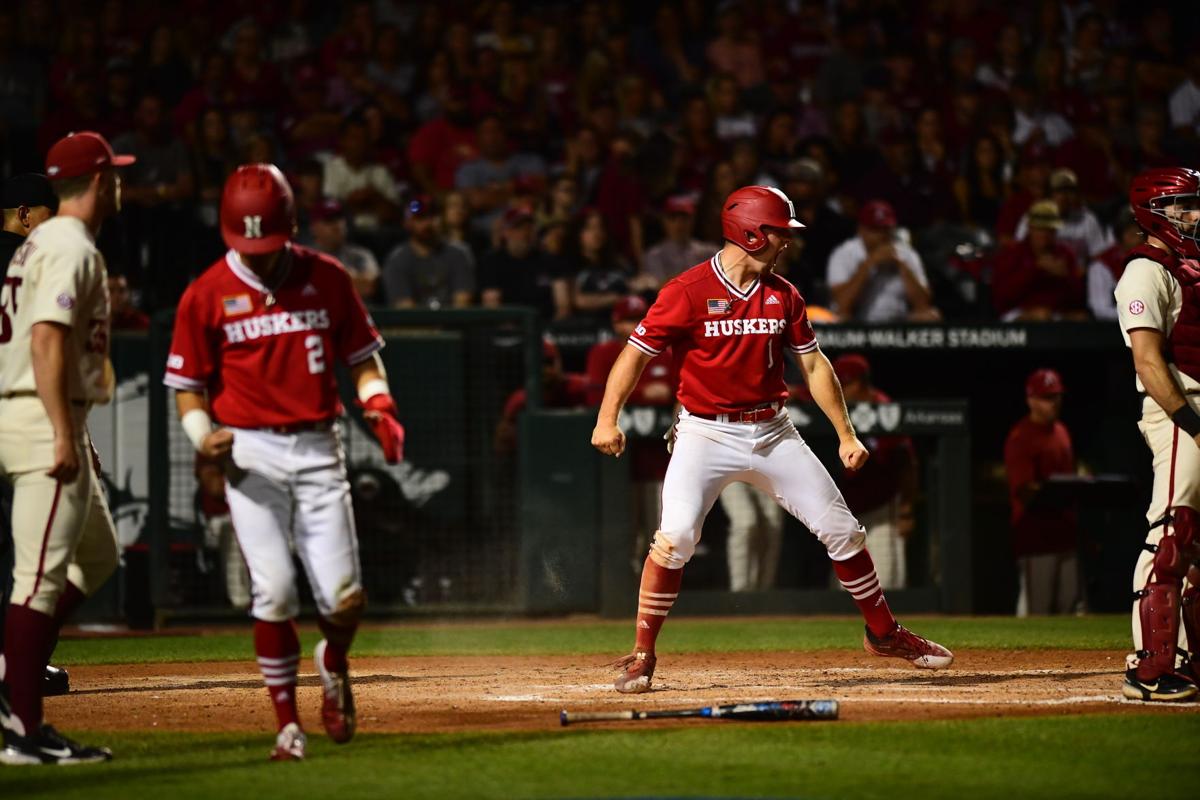 Nebraska's Spencer Schwellenbach celebrates after scoring on Griffin Everitt's two-run hit in the fifth inning against Arkansas on Sunday in Fayetteville, Ark. 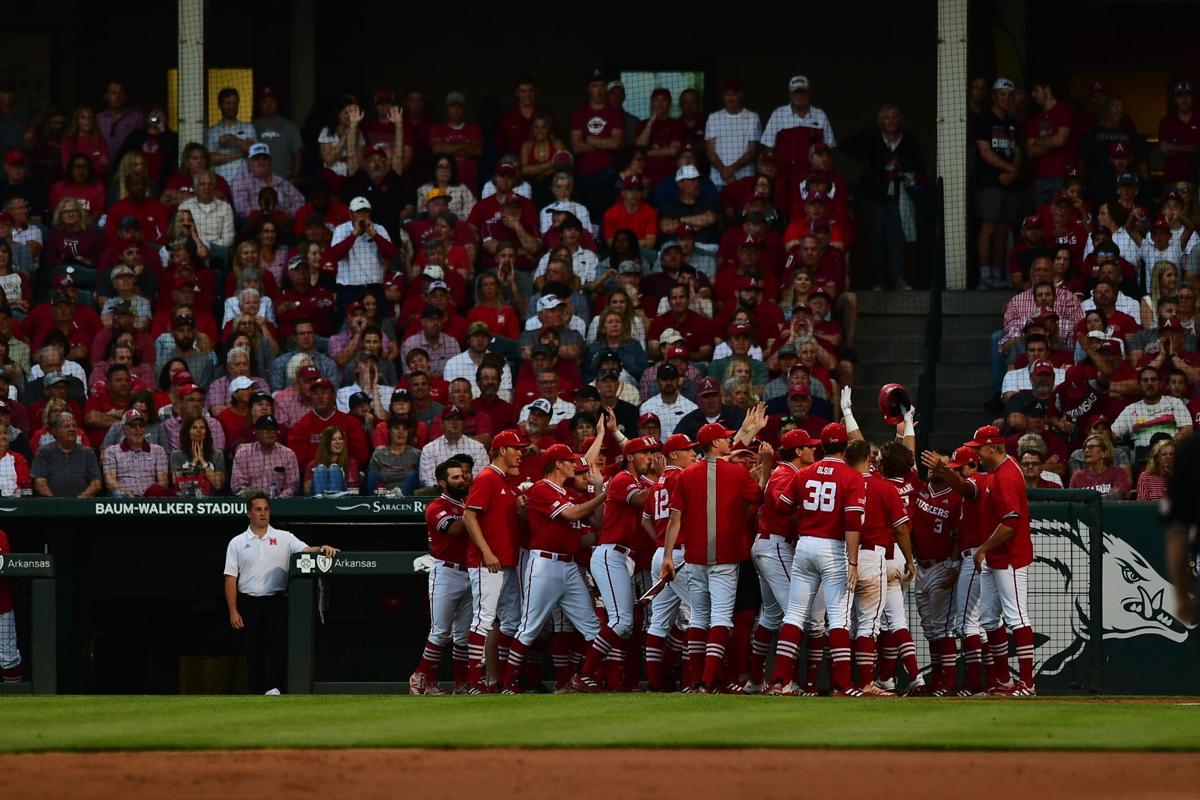 FAYETTEVILLE, Ark. — Nebraska has a shot.

That's all the Huskers wanted when they arrived at Baum Stadium on Sunday morning, needing to win one elimination game just to get another.

And after dispatching NJIT in a quiet ballpark earlier in the day, the Huskers drowned out the noise that fills Arkansas' home stadium, getting a stellar start from Kyle Perry and a superstar performance from Spencer Schwellenbach to beat the top-ranked and No. 1 national seed Razorbacks 5-3 and force a winner-take-all game Monday at the Fayetteville Regional.

NU baseball notes: Bouncing back in a regional where 'you put an awful lot into each game'; the pitching plan; latest on Anderson's injury

And it gives the Huskers (34-13) an opportunity to play for a super regional appearance. Monday's game is set for 6 p.m.

This team that has embraced the “don’t care” mantra all season lived up to it again Sunday night.

It started in the first inning, when Jaxon Hallmark sent a blast over the center-field fence to put Nebraska up 1-0. The Texan tipped his helmet to the Arkansas crowd as he crossed home plate, drawing boos. Then he asked for more with a “bring it on” hand gesture as he went to the dugout.

The Huskers were here. And they weren’t backing down.

"It's a huge spark. Huge spark for the team, quiets the crowd down," Schwellenbach said of Hallmark's shot. "Last time we played them yesterday, it was not like that. We kind of came out slow, and the game kind of turned out that way."

Perry, less than a year removed from Tommy John surgery, went 4 1/3 innings in the start on the mound to keep NU in it. The left-hander struck out seven and walked three in his longest appearance of the year, and save for a couple of mistakes in the third inning, kept the Arkansas offense in check.

Perry’s performance gave way to Schwellenbach, who took the mound earlier than he has in any other game this season and threw a season-high-tying 65 pitches.

In the ninth, after he had retired seven straight batters, Schwellenbach issued his first two walks. He threw a wild pitch. He was “drained," he said after the game, as 11,000 Arkansas fans called the hogs during a mound visit by NU pitching coach Jeff Christy.

Nine pitches later the game was over as Schwellenbach got a strikeout and a popup to end the game.

The junior is Nebraska’s star. And he delivered a performance that stars deliver.

In true Nebraska fashion, it wasn’t always pretty. The Huskers ran into outs at third base and home plate in the third and fourth innings — NU’s seasonlong commitment to aggressiveness on the basepaths backfiring.

There were four combined errors between two of the nation’s best fielding teams in the first three innings.

Nebraska committed two in the third, when Arkansas scored all three of its runs. The second came when Griffin Everitt tried to toss to Perry covering the plate after a passed ball. The sequence allowed the Razorbacks to plate a pair of runs.

Everitt found redemption in the fifth when his two-out single into right field scored two runs and provided the winning margin. That hit came two batters after — who else — Schwellenbach drove a single into left-center to tie the game.

"It was nothing but pure joy and happiness. We all love each other and we're not ready to be done yet," Everitt said of the win. "And we know we've got to come back tomorrow and beat them again.

"So definitely going to cherish this and remember it forever, but we've got to come back tomorrow and win a game." 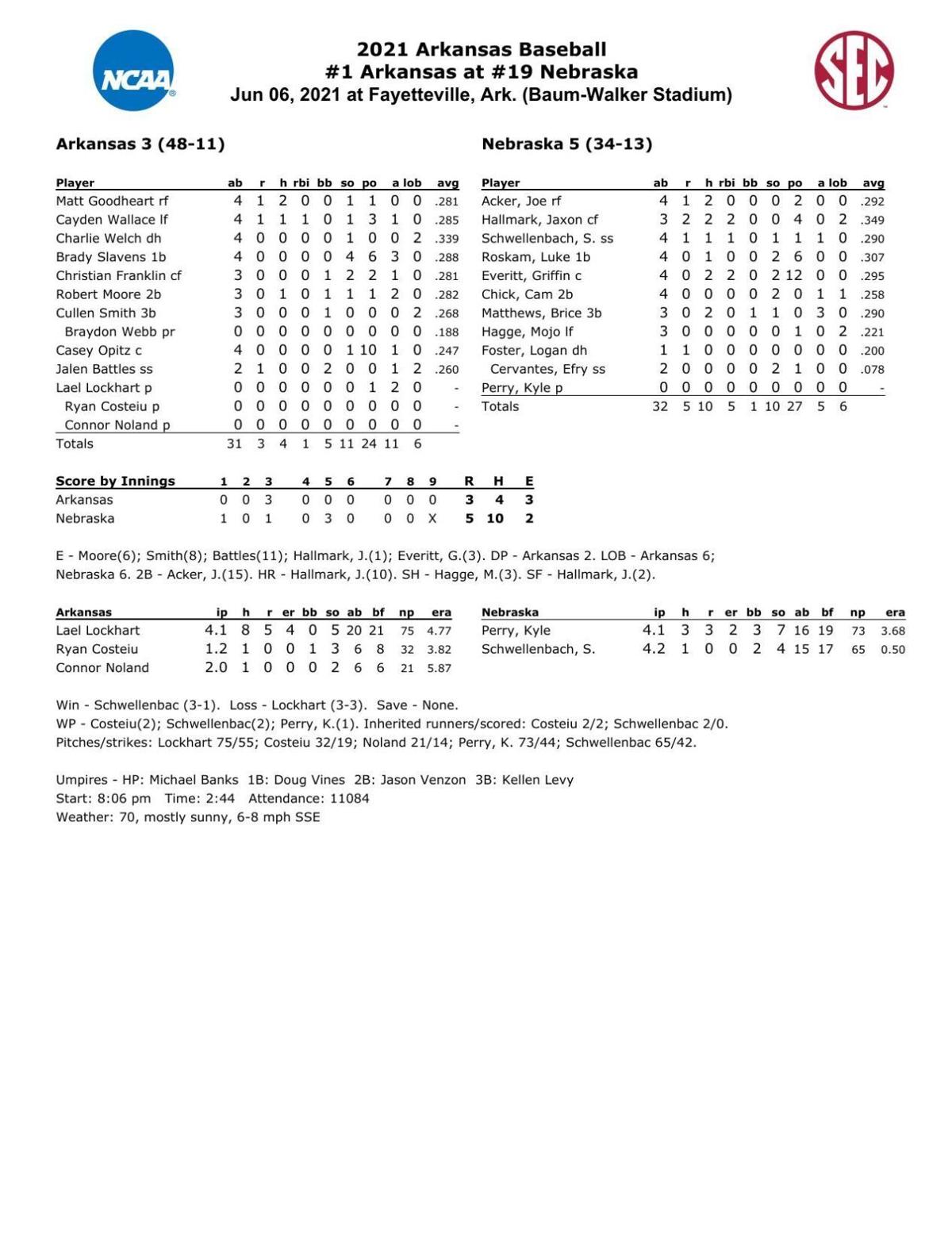 Photos: Huskers and Razorbacks meet for Round 2 in Fayetteville Regional

2021 Heisman Trophy Market: Where is the value?

2021 Heisman Trophy Market: Where is the value?

Nebraska's Spencer Schwellenbach celebrates after scoring on Griffin Everitt's two-run hit in the fifth inning against Arkansas on Sunday in Fayetteville, Ark.