Become a Member
Read Today's E-edition
Share This
A case study on Nebraska's struggles in the red zone, and what the Huskers say about it
0 Comments
Share this
1 of 2 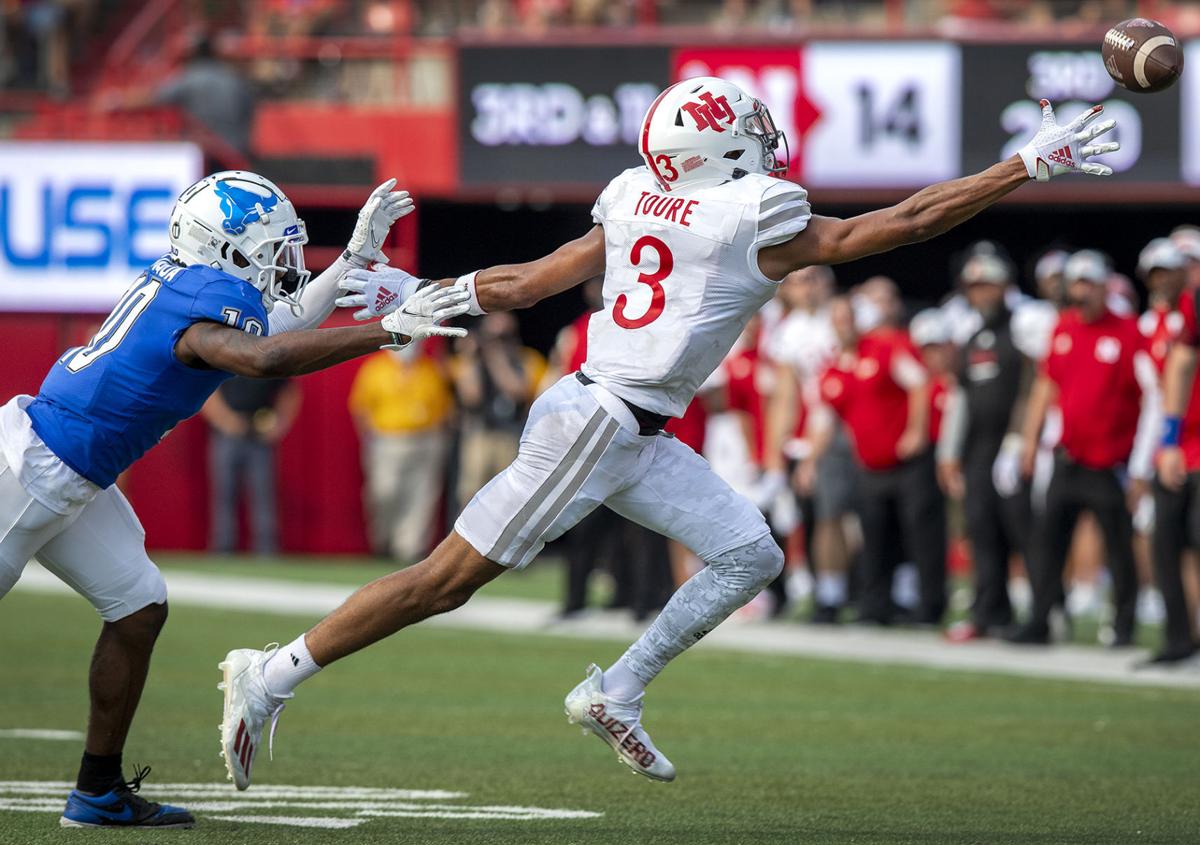 Nebraska wide receiver Samori Toure (3) reaches out for a Adrian Martinez pass as he's defended by Buffalo's Marcus Fuqua in the third quarter on Sept. 11 at Memorial Stadium. 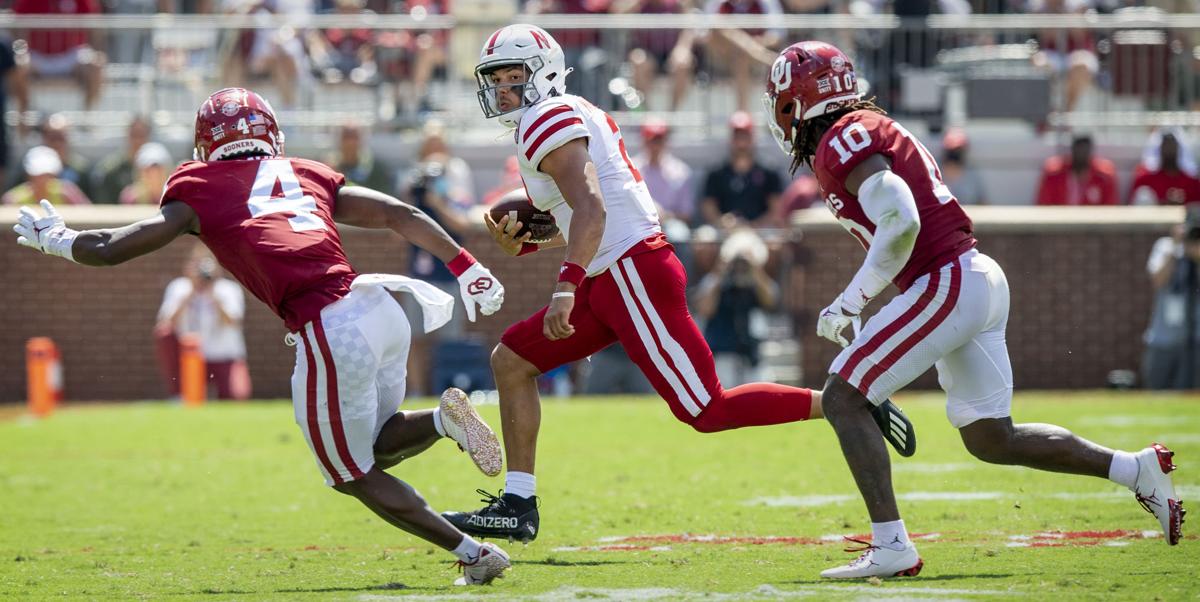 If Nebraska had a cleaner kicking operation on the road against Oklahoma on Saturday, it may well have returned home from Norman with by far the biggest win of Scott Frost’s tenure.

Ask the Huskers' offensive players and coaches, however, and they’ll tell you the game shouldn’t have come down to a pair of missed field goals and an improbable three-point swing on an extra point gone wrong.

“We’ve got to score in the red zone,” offensive coordinator Matt Lubick said Tuesday. “In the red zone, as far as finishing drives, we’ve got to be better at that. It shouldn’t have come down to three field goals. We should have been able to punch a couple of those in.

NU did twice against the Sooners but also failed twice to score at all on Connor Culp’s missed 35-yarder in the third quarter and a turnover on downs early in the fourth quarter.

Based on the statistics, that’s been about par for the course for Nebraska in 2021. Get into the red zone, and scoring a touchdown is 50-50 at best.

At 2-2, the Huskers have two comfortable wins and two one-possession losses. NU visits East Lansing, Michigan, on Saturday night to face its second straight ranked opponent in No. 20 Michigan State. It kicks off a stretch of eight Big Ten games in 10 weeks, a slate that currently includes five teams in the Associated Press’ Top 25.

If the Huskers are to make a successful run through that gantlet, they are going to have to score. They’re getting chances so far this year, they just haven’t converted nearly enough.

Nebraska’s offense isn’t exactly the high-flying show that Frost orchestrated at Central Florida in 2017 or Oregon in 2015, but it’s actually been pretty proficient at moving the ball.

Through the first four games, NU checks in at No. 35 nationally at 6.64 yards per play and the ranking actually jumps to No. 26 when considering only games between Football Bowl Subdivision schools.

“We’ve had more explosive plays this year and that’s a big component of our offense that has got a lot better,” junior quarterback Adrian Martinez said.

However, the Huskers aren’t efficiently turning those chunk plays and yards into points, largely because they aren’t capitalizing in the red zone.

The overall number, of course, blends in Nebraska’s place-kicking issues — Culp is 3-for-8 on field-goal attempts and has missed five of his last six — with the offense’s inability to turn red zone trips into touchdowns consistently.

The season is still relatively young, but if those marks continued, they’d represent the worst of Frost’s tenure in Lincoln. NU’s never been above 59% red zone touchdown rate so far under Frost — typically anything at 70% or above puts a school in the top five or higher in the Big Ten — but has never been worse than 51.4%.

After the Huskers scored touchdowns on just a shade more than half of their possessions in 2020, Frost said this summer that the program conducted extensive statistical analysis to figure out what the issue was.

“We were second in the league in rushing, second in the league in efficiency per play and near the bottom of the league in points per drive,” Frost said earlier this year. “Some of that is that the defenses we played were really good and I give them a ton of credit. This is a good league with a lot of good coaches. But I think that discrepancy largely is just mistakes we made ourselves. Negative plays, turnovers, bad snaps, penalties.”

The Huskers still aren’t getting much juice for the amount of squeezing they’re doing. The turnovers and bad snaps have abated mostly, but penalties and negative plays are still holding the Huskers back.

Nebraska is only scoring one touchdown for every 120.3 yards of offense so far this season, which is No. 103 in the country. It checks in at No. 106 in yards of offense required per point scored at 16.3.

The past two weeks have been particularly troublesome.

NU’s offense had the ball at the opponents’ 35-yard line or closer against Illinois and Fordham 13 times and came away with points on all but one (Logan Smothers’ late, mostly inconsequential fumble against the Rams). That included 10 touchdowns. Against Buffalo and Oklahoma, though, the Huskers generated 13 more trips to the opponents’ 35 or deeper but scored just seven times (six touchdowns).

“On the first drive (against OU), we got a field goal and had maybe four penalties on that one drive. Just unacceptable for what we’re trying to do,” Martinez said after the game. “Then on the opening drive of the second half, we needed to finish that one and at the very least come away with some points, and we didn’t do that, either.

“Fixable things, self-inflicted errors that we need corrected and that we can’t make when we’re playing a really good football team.”

Nebraska wide receiver Samori Toure (3) reaches out for a Adrian Martinez pass as he's defended by Buffalo's Marcus Fuqua in the third quarter on Sept. 11 at Memorial Stadium.