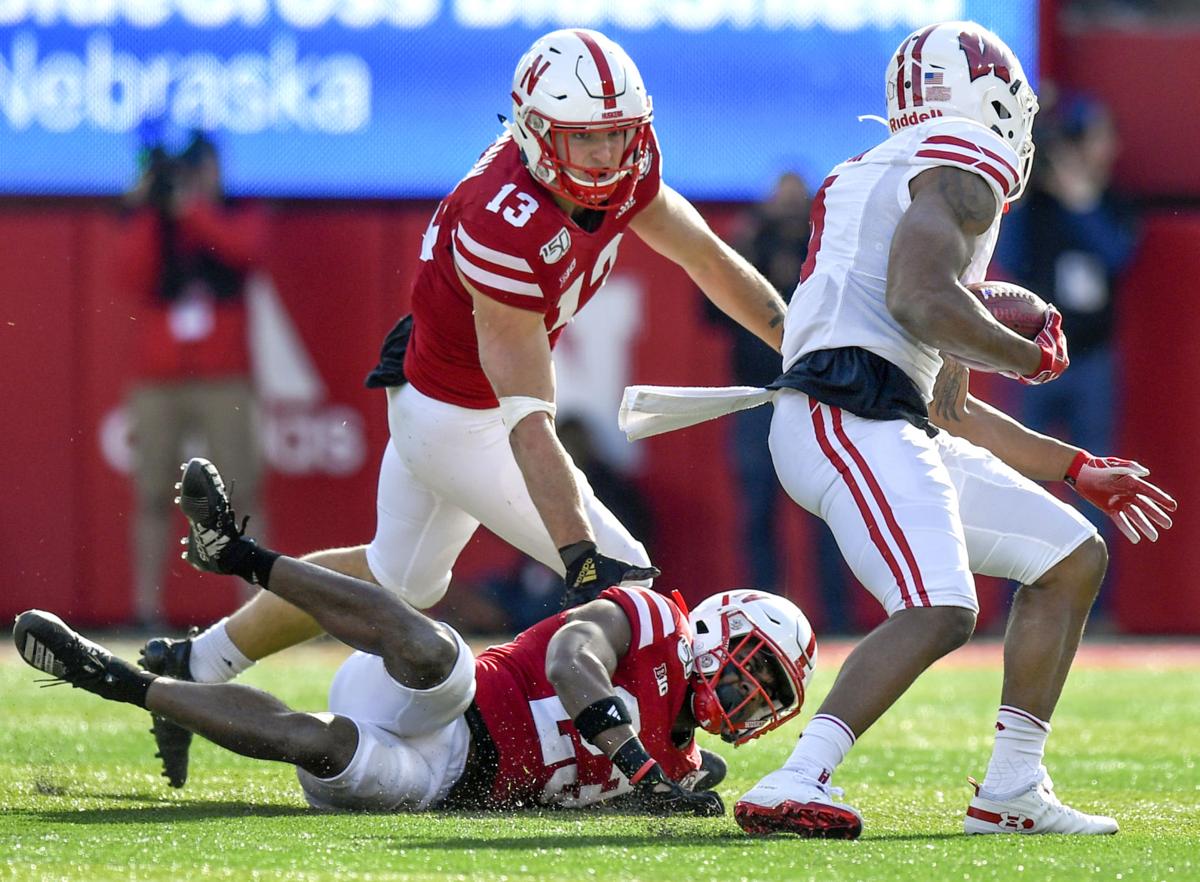 Nebraska's outside linebacker JoJo Domann (13) and cornerback Dicaprio Bootle (23) miss a chance to tackle Wisconsin wide receiver A.J. Taylor (right), leading to a Badger touchdown during the first half Saturday at Memorial Stadium. 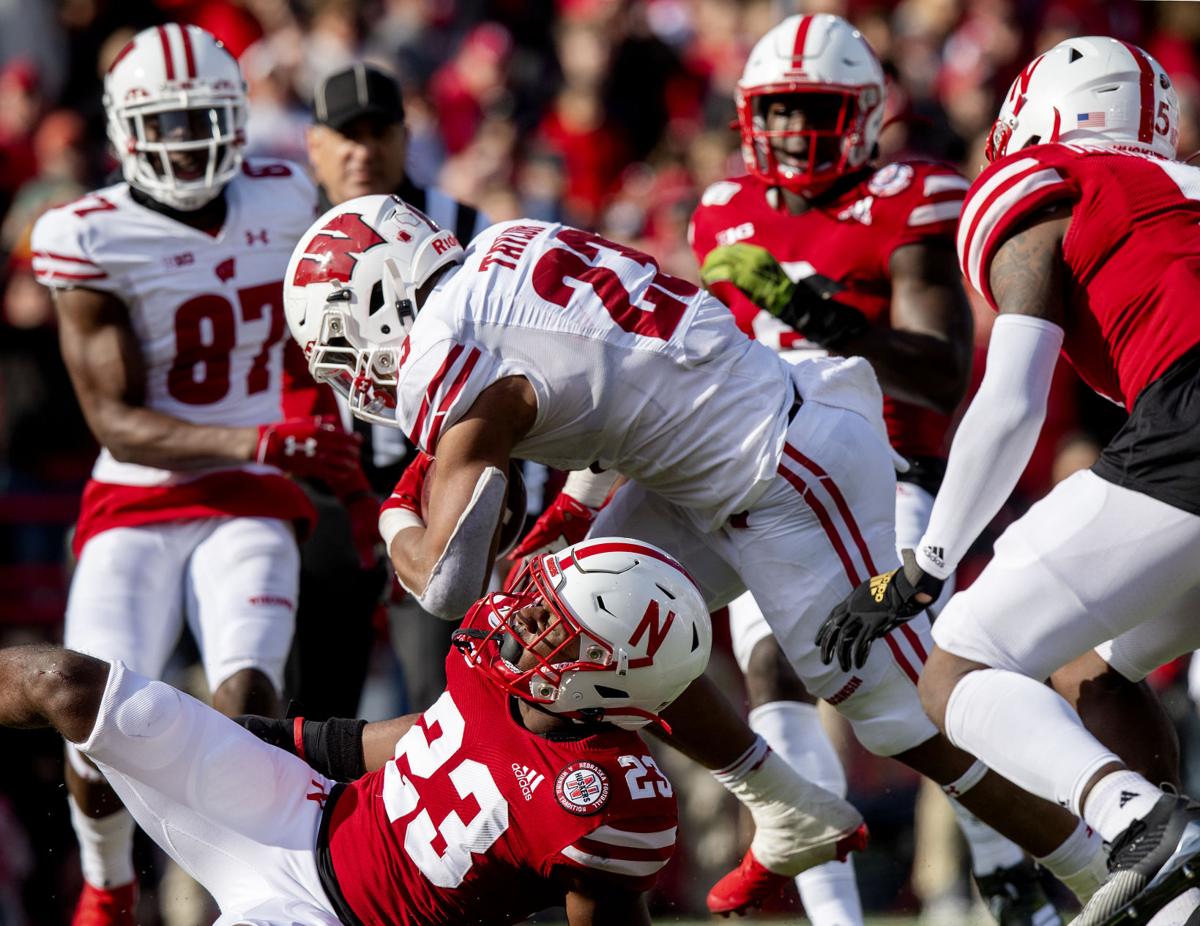 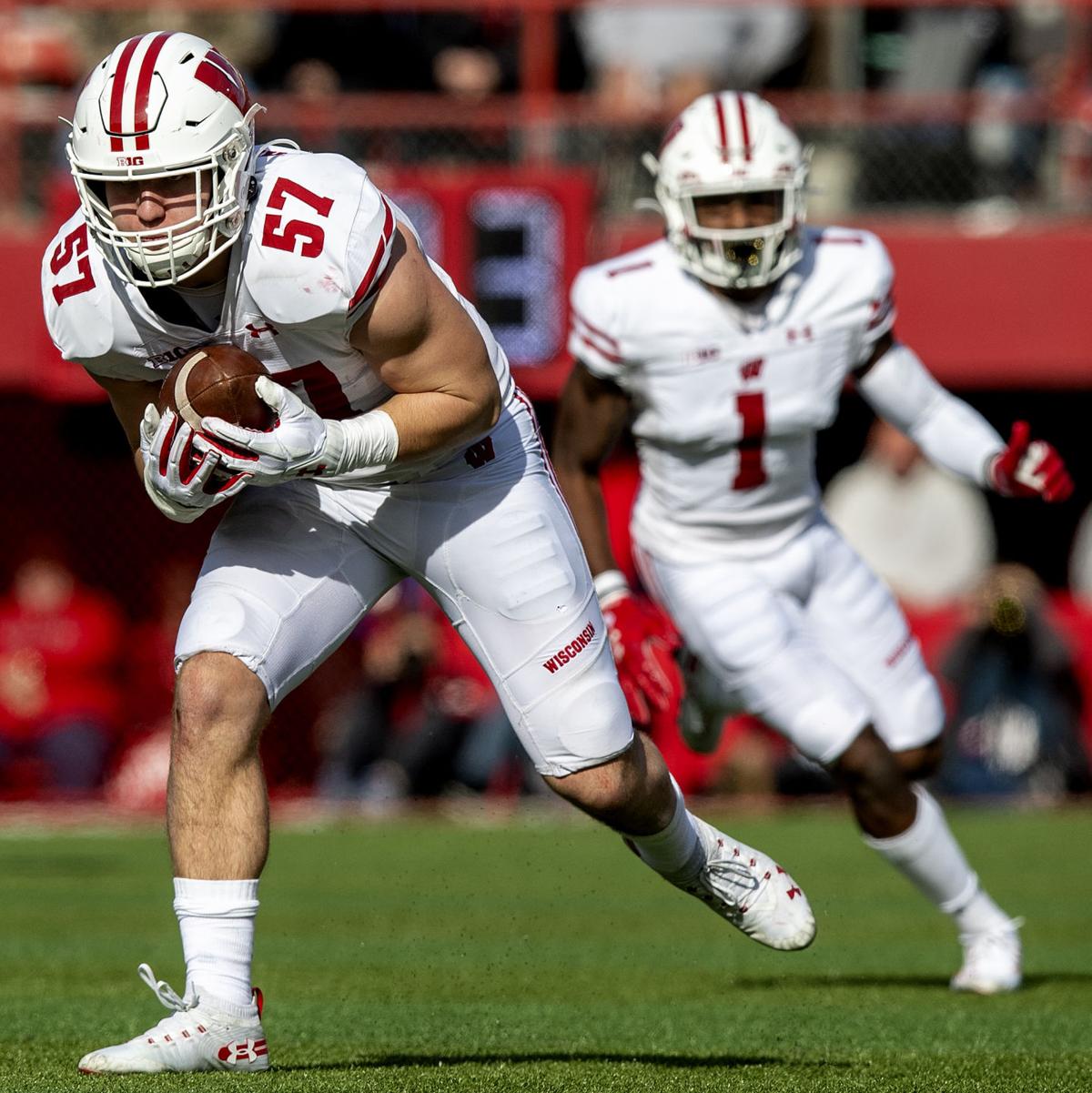 Wisconsin's Jack Sanborn (57) picks off a pass from Nebraska's Adrian Martinez in the second quarter as Aron Cruickshank (1) looks on Saturday at Memorial Stadium. Cruickshank had a kickoff return for a TD in the first quarter.

Sometimes a sequence of plays, a quarter or even a full game can stand as a microcosm for where a program stands in the larger scope.

Such was the case Saturday afternoon for Nebraska at Memorial Stadium against Wisconsin, ranked 14th in the College Football Playoff rankings and a Big Ten West foe the Huskers have spent much of their tenure in the conference chasing.

There were many moments over the course of a 37-21 Wisconsin win — the program’s seventh straight over Nebraska dating to December 2012 — that head coach Scott Frost’s team rightfully felt like it was in the game. Perhaps even in control.

When it struck first and went ahead 7-0. When Adrian Martinez rumbled into the end zone for a 14-10 lead in the second quarter. When the Huskers marched down the field early in the third quarter, pushing the ball down to the UW 15-yard line with the look of a team primed to punch in another score and close to within six points of a top-25 program still holding onto conference championship aspirations.

What followed each of those moments, though, were the kind of mistakes teams simply can’t make in this league if they want to win consistently, particularly teams that have key players injured like Nebraska did Saturday in defensive linemen Darrion Daniels and Carlos Davis and wide receiver Wan’Dale Robinson. The kinds of mistakes teams can’t make when they don’t have the talent to overwhelm opponents.

The kinds of mistakes that have become all too familiar for Nebraska this season, particularly during a current four-game losing streak that has dropped the Huskers to 4-6 overall, 2-5 in Big Ten play, and the brink of postseason elimination with two games to go and two wins required for bowl eligibility.

Your Report Card: Wisconsin at Nebraska

“I’m tired of looking for silver linings,” Frost said. “This team has to decide it’s going to do whatever it takes to change it, and we had opportunities today.”

After NU took the early lead, capitalizing on a fumble by UW star running back Jonathan Taylor, its kickoff team faltered. A lazy, short kickoff set up Badger wide receiver Aron Cruickshank with all kinds of options, and he ripped through the middle of the Husker coverage unit before bending toward the right sideline on an 89-yard scoring return.

“When you go up seven and you have all the momentum and you kick a high ball to (the 11-yard line) and give up a kick return, you just flushed away a chance to be in control of the game,” Frost said.

NU took the lead back in the second quarter behind an efficient five-play, 73-yard drive that included Martinez completions of 23 yards to tight end Jack Stoll and 14 to wide receiver JD Spielman. The drive culminated in a bruising, 2-yard Martinez run, but the Huskers’ tackling faltered soon after. UW quarterback Jack Coan found AJ Taylor for a nice gain that ruptured into a 55-yard touchdown when linebacker JoJo Domann and defensive backs Dicaprio Bootle and Marquel Dismuke all failed to get him to the ground.

That kicked off a 24-0 spurt for the Badgers over 16:49 of game time across the second and third quarters that irreversibly placed control of the game in the visiting team’s hands.

After NU drove down the field promptly to start the third quarter — its defense forced a three-and-out to begin the frame as a buzz crept back into the stadium — the quarterback faltered. Martinez, who fought valiantly — “Adrian played like the Adrian we know,” Frost said — made one of his only critical errors of the game, failing to throw the ball away or escape the grasp of senior UW outside linebacker Zach Baun and taking a 20-yard sack, resulting in a second-and-30.

“I wanted to throw the ball away,” said Martinez, who completed 13-of-23 for 220 yards, had an interception, rushed for 89 net yards and accounted for two touchdowns. “That is what I was aiming to do and I just have to be better. Whether that would be throwing the ball away early or finding a way to make it happen. It is inexcusable.”

Two plays later, sophomore kicker Barret Pickering missed a 41-yard field-goal attempt. What could have been a six-point or four-point margin instead swelled to 20 when UW marched 76 yards in nine plays — eight of them rushes — and Taylor punched home an 11-yard touchdown for a 34-14 lead with 3:19 remaining in the third quarter.

Much of what went wrong for Nebraska is what’s been going wrong over the course of a disappointing second season under Frost. The missed tackles. Three second-half drives inside the UW 25-yard line that came up empty. The missed field goal, and two failed fourth-quarter fourth downs. The special-teams unit committed a major error with the kick-return score and minor blunders, including an iffy day punting and an ill-advised game-opening kick return that cost NU 11 yards right off the bat.

In turn, much of what went right is what Frost considers the blueprint in a long-term plan that came more to mind today thanks to a morning announcement that NU had added two years to his contract, extending the native son’s $5 million per year deal through the 2026 season.

Martinez showed signs of his sky-high potential, helping the Huskers to 493 yards (8.2 per play) against one of the stingiest defenses in the country despite a dwindling skill-position group that on this day was without Robinson. Nebraska ran for 273 yards against a UW defense that’s allowed just 84.4 per game. Junior Dedrick Mills racked up a career-best 188 on 17 touches thanks to hard running but also impressive work from an oft-maligned offensive line. It’s hard to look at 320 rushing yards allowed and find progress, but it was far better than NU has done against the Badgers in recent years, and Taylor’s longest run of the day only went for 19 yards.

“We've got to keep bringing more talent into this program so that we are going into gunfights with fully loaded guns, and we’ve got some really good bullets on this team,” Frost said. “We have some really good pieces, some really good weapons, but we need more. When you come in missing some guys it makes it even harder, and that’s why I’m proud of our guys for how they fought. A vast, vast majority of this team came out and fought. We need more of that.”

Head-to-head competition has shown the gap in the West between NU and the likes of Wisconsin and Minnesota. It remains substantial in overall talent and depth, in execution level and, to use a term Frost has wielded several times in recent weeks, in “conviction.”

He remains adamant, though, that better days are ahead. Some perhaps soon (this didn’t look like a team planning to cave in over the next two weeks) and many more later.

“I think everybody, including me, hoped it would flip this year and it seems like we’re miles away and we are this close at the same time,” Frost said. “A few more pieces, a few more plays, and this whole thing looks different. It’s not going to happen until we have a team that’s ready to go make it happen, and we are trying to get them there every single day.”

Your Report Card: Wisconsin at Nebraska

Nebraska's outside linebacker JoJo Domann (13) and cornerback Dicaprio Bootle (23) miss a chance to tackle Wisconsin wide receiver A.J. Taylor (right), leading to a Badger touchdown during the first half Saturday at Memorial Stadium.

Wisconsin's Jack Sanborn (57) picks off a pass from Nebraska's Adrian Martinez in the second quarter as Aron Cruickshank (1) looks on Saturday at Memorial Stadium. Cruickshank had a kickoff return for a TD in the first quarter.