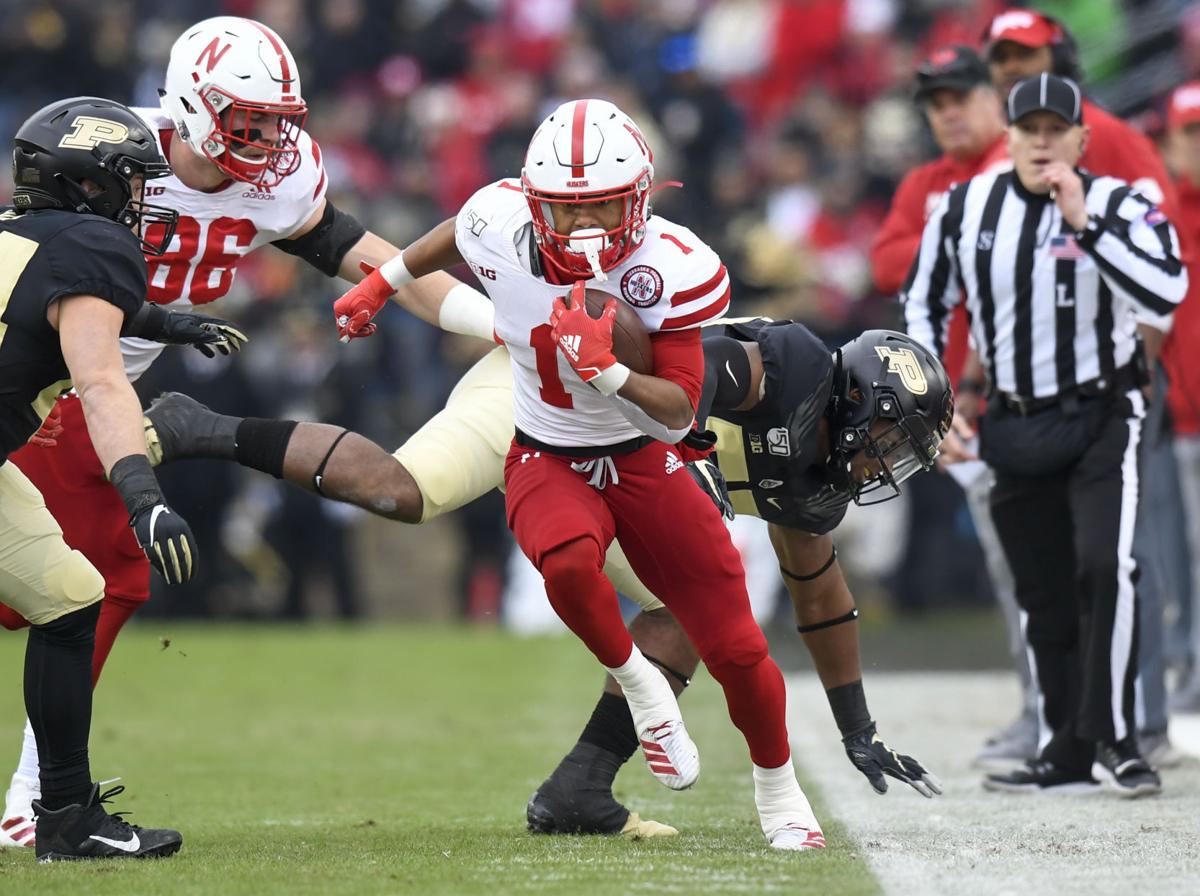 Nebraska's Wan'Dale Robinson (1) runs against Purdue during the first half on Nov. 2, 2019, at Ross-Ade Stadium in West Lafayette, Ind. 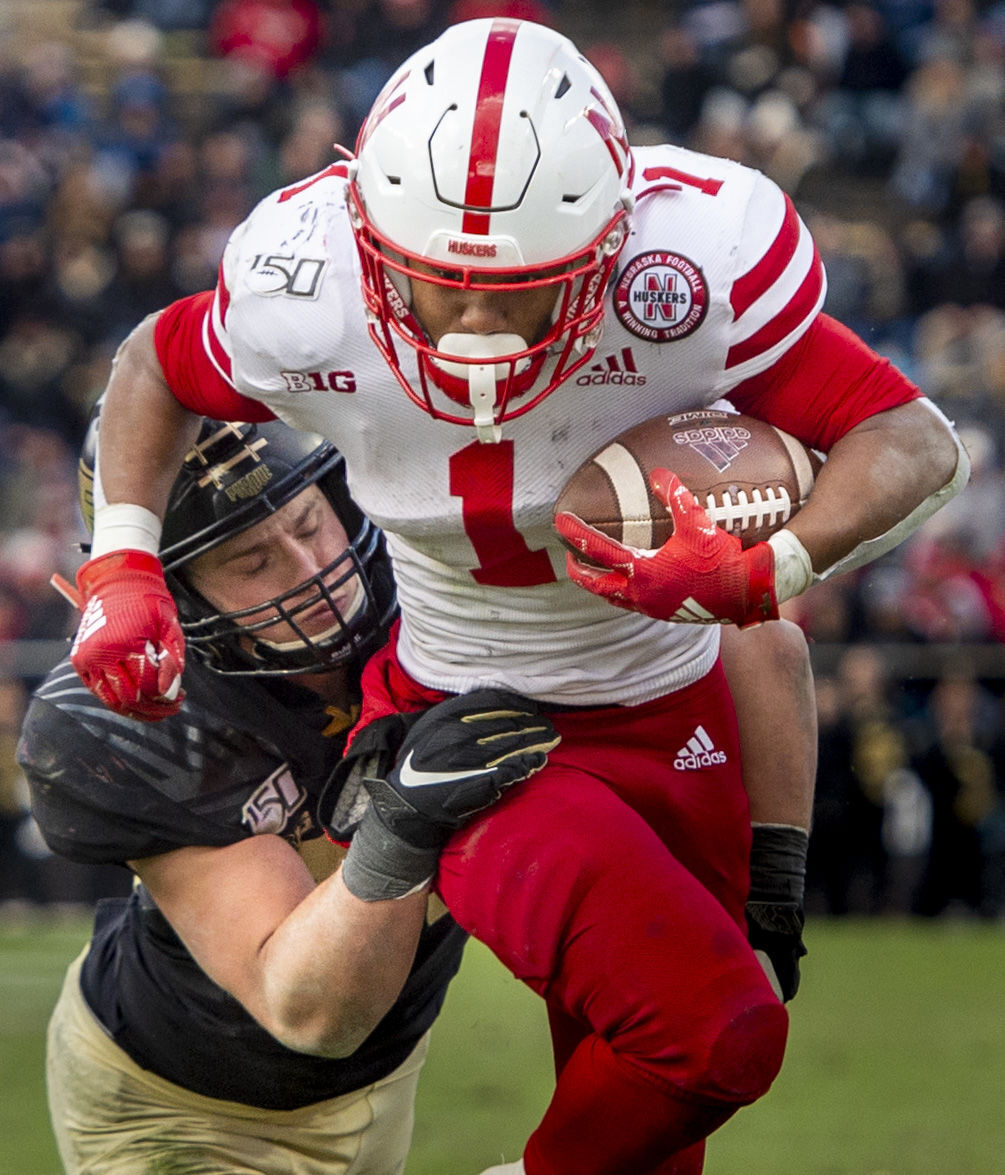 When Nebraska unveiled its $155 million football training facility in September of 2019, Wan'Dale Robinson spoke at the ceremony. The young wide receiver was picked as NU's lone player representative at the unveiling because he was set to be around when the doors opened in August of 2022 and he was just the kind of player the Huskers wanted walking around their future palatial digs.

Instead, he’s gone before shovels ever hit the dirt.

The Huskers lost a cornerstone player and their best offensive weapon Monday afternoon when the sophomore announced that he intended to enter the NCAA transfer portal.

Rounding up the reaction to Wan'Dale Robinson's transfer announcement

The move, which was finalized when his name appeared in the portal Monday afternoon, has been in the works for at least the past few days.

Robinson wrote a lengthy message announcing his departure, and said that his mother was hospitalized late last year after testing positive for COVID-19.

"For anyone who knows me knows she's the biggest reason I play the game of football. Being away from my mother and not seeing her during the season hurt me," he said. "... I intend to find a place closer to my mother that will still allow me to achieve my dreams and goals."

According to a Kentucky.com story, Robinson's mom, Vicki Davis, was diagnosed with multiple sclerosis when she was 25 and fibromyalgia in 2018.

Robinson also told ESPN that he thought he could find a program that better highlighted his skillset.

"It was about 50-50 with my mom and how I was used at Nebraska," Robinson said. "I loved the touches and the way I got the touches. Sometimes they don't translate to the way I want them to for the NFL."

Robinson became a fan favorite and arguably Nebraska’s most important offensive player in his two seasons on campus, topping 1,000 all-purpose yards as a freshman in 2019 and finishing his rookie season as a finalist for the Paul Hornung Award, given annually to the most versatile player in college football.

Then, as a sophomore, he was NU’s go-to target by a wide margin, more than doubling the next closest offensive player with 51 catches and 66 targets in the passing game. He also finished fourth on the team in rushing yards at 240 and was arguably the team’s most effective player out of the backfield, averaging 5.2 yards per carry on the season.

"I can't thank Coach (Scott) Frost, Coach (Ryan) Held, Coach (Troy) Walters and Coach (Matt) Lubick and the rest of the staff enough for the opportunity they had given me," Robinson wrote. "They helped me grow on and off the field. I will be forever grateful for that. To my teammates, I will miss you guys more than you'll ever know and I wish all of you the best of luck on the next season. I hope the bond we created will not be broken based on where each of us play. I will cherish every moment I had with you guys and my love for all of you won't change."

The most likely eventual destination for the Frankfort, Kentucky, native is considered to be the University of Kentucky.

The Wildcats earned a verbal commitment from Robinson out of high school after the Huskers had long appeared to be in the driver’s seat. After five weeks, though, Robinson flipped to the Huskers shortly before National Signing Day in December 2018. At the time, he said he pledged to UK because he felt pressure to stay in the state.

thank you so much, Nebraska🖤 pic.twitter.com/WnqYV9MDvz

"Throughout this whole recruiting process I've always been told, 'Do what's best for you. You have to live your life for you and nobody else. Just follow your heart,'" Robinson tweeted when he affirmed his verbal pledge to Nebraska. "Those words of advice got away from me as my verbal commitment date neared."

Since then, he’s been hailed as an example of exactly what Frost and company are trying to build in Lincoln. Frost regularly says Robinson is the perfect player to thrive in his system. He spoke up as the 2019 season went along, showing a willingness to be a vocal leader even though he was just a freshman.

"To the best fans in college football, Husker Nation is like no other," Robinson said. "You guys had our backs through all the ups and downs. I can't thank you guys enough for the cheers, screaming and yelling for myself and everyone."

Nebraska added a graduate transfer wide receiver on Monday in Montana's Samori Toure, but the two are different styles of players and the one-in, one-out seems to be related essentially in timing only. The Huskers will be young in the slot in 2021 with Robinson gone. They could look to freshmen like Alante Brown, who played some in 2020 but didn't have a major role, and Will Nixon, who missed the fall because of a knee injury he suffered in July. NU also could use some different styles of players in the slot as well, like redshirt freshman Chris Hickman or even incoming tight end Thomas Fidone.

One way or another, though, the Huskers will miss Robinson's toughness, his versatility and his willingness to fill in at running back over the past two years when NU got thin in the backfield.

One thing is clear, though: NU has suffered heavy attrition among the receivers that have signed since Frost arrived in Lincoln. Depending on exactly who you count as a receiver, NU has somewhere between 15-17 scholarship signees between the 2018-20 classes. Of 17, which includes hybrids like Chris Hickman, Miles Jones and Justin McGriff, six have transferred, one never made it to campus and Andre Hunt was dismissed from the team and expelled from NU. Only Mike Williams and Kanawai Noa, a junior college transfer and a graduate transfer respectively, finished their eligibility in Lincoln. Four of the seven remaining players on the roster just finished their first year in the program. That's before holdover transfers like JD Spielman, Tyjon Lindsey and Jaevon McQuitty.

Circumstances differ and transfers have become quite common in college football, but that is quite a revolving door at one position for the Huskers the past three years.

Looking back at Wan'Dale Robinson's time with the Huskers

Nebraska's Wan'Dale Robinson (1) runs against Purdue during the first half on Nov. 2, 2019, at Ross-Ade Stadium in West Lafayette, Ind.