Become a Member
Read Today's E-edition
Share This
Nebraska found its 'complete back' in Rahmir Johnson, who started preseason camp fifth on depth chart
0 Comments
Share this
1 of 2 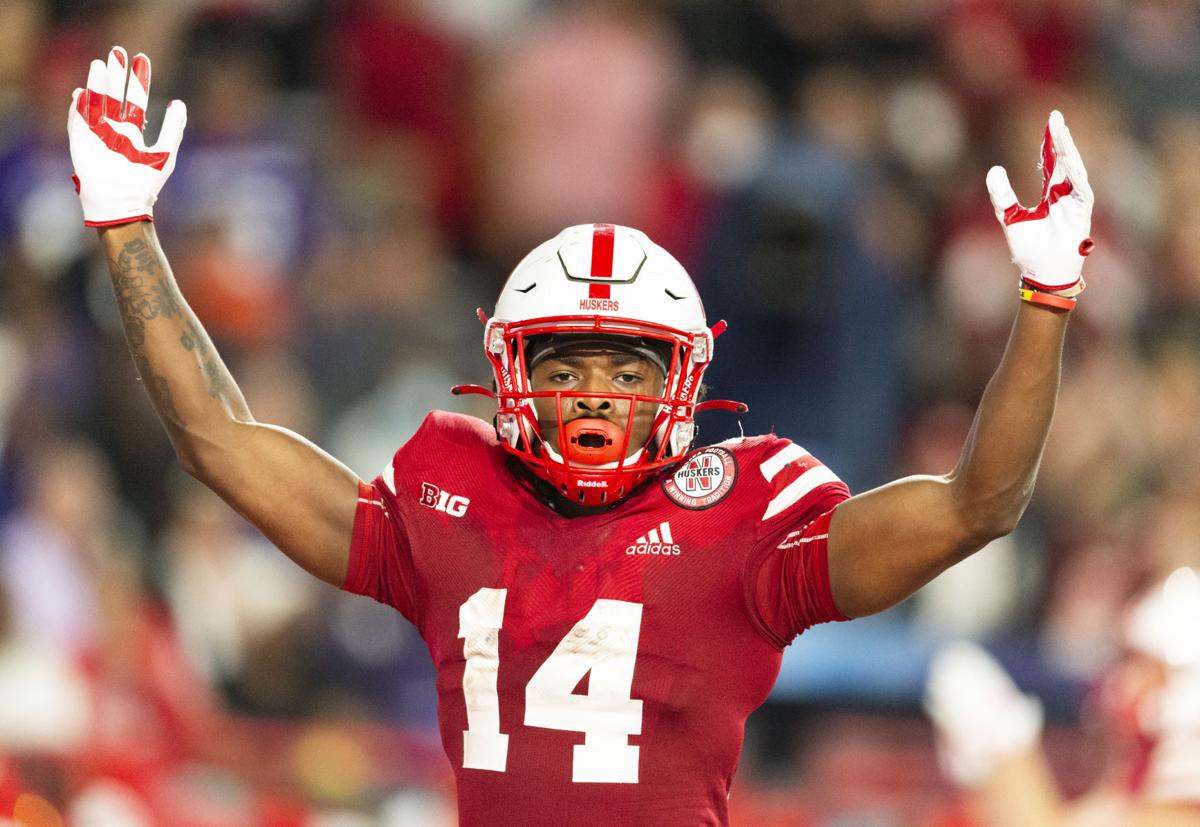 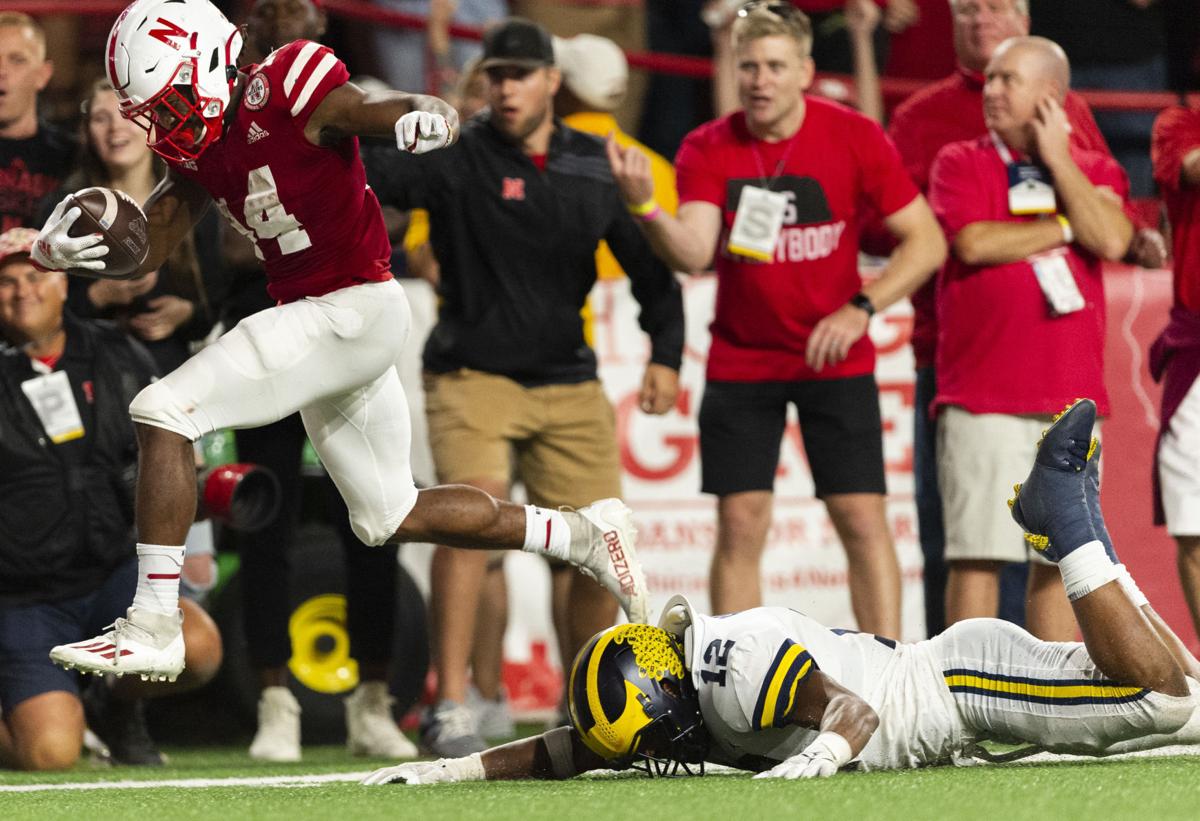 Rahmir Johnson pretty much figured the ball was coming his way.

He’d seen the play in practice a bunch of times and junior quarterback Adrian Martinez always found him.

So the redshirt freshman running back faked the handoff, leaked out to the right and ran a wheel route against Michigan’s defense. He got a step, Martinez put the ball on him and he scooted into the end zone for a 41-yard touchdown.

“I was ready for it. I kind of lost it in the lights, but found it,” Johnson said after the game. “I knew he was going to place it in the right spot, so I’m glad I got that play and scored that touchdown.”

The funny thing about it: By yardage, it was only his second-longest catch of the night, trailing slightly a 43-yard screen pass on the opening play of the night for the Huskers.

The New York native finished NU’s 32-29 loss to the Wolverines with 105 receiving yards on six catches but also ran hard between the tackles against a rugged Michigan defensive front and churned out 67 yards on 17 carries.

The 5-foot-10, 185-pounder isn’t Nebraska’s biggest back by a long shot, but he’s started each of the past four games and in that window has rushed for 259 yards (4.4 per carry) while never getting more than 19 attempts. Add in 169 receiving yards over the same stretch, and Johnson is averaging 107 offensive yards per game since he took over the starting job.

Even that doesn’t quite show the full picture of the lift Johnson has provided, according to offensive coordinator Matt Lubick.

“His pass protection, he does a good job of stepping up and he’s not afraid to take on a linebacker and he knows who he’s blocking,” Lubick said. “He’s really playing as a complete back. I know the fans see him running the ball, but you’ve got to be able to pass protect, you’ve got to be able to catch the ball. He’s done a really good job of that stuff and he’s playing really consistent for us. I’m proud of him.”

Even in the weeks after Johnson first ascended to the starting role, head coach Scott Frost continued to say that the starter could be anybody from NU’s rotation. After all, freshman Gabe Ervin started Nebraska’s first two games, sophomore Markese Stepp started against Buffalo (and Ervin suffered a season-ending injury during the game) before Johnson got the nod against Oklahoma.

Against Northwestern and Michigan, freshman Jaquez Yant served as Nebraska’s No. 2 back, and while the rotation spots behind Johnson are still up for grabs, Frost made it pretty clear that Johnson had earned the featured spot going forward.

“He was probably fifth on the depth chart to start fall camp,” Frost said. “But I’ve been saying all along that I’ve of been waiting for someone to step up and kind of take it, and he has taken advantage of chances. I think he’s running hard, making plays in the pass game. We certainly need other guys to keep improving and give him some breaks, but really happy for Rahmir and how far he’s come.

“When you are patient with some people, sometimes they continue to improve and end up being good players.”

It’s the fourth straight season that Nebraska’s running back room changed considerably as the fall played out. In 2018, Devine Ozigbo started fourth on the depth chart and eventually ended up as the featured back. In 2019, NU tried to rely on Maurice Washington before he eventually left the program and Dedrick Mills took over. Then Mills missed more than three games out of eight last year and the Huskers rotated through several young options.

This summer, running backs coach Ryan Held made it clear Johnson was at a crossroads, especially after he missed a chunk of spring with an injury while other young players took strides forward.

“I used to get frustrated with him for not running full speed,” Frost said. “He’s such a fast kid and everything wasn’t 100% all the time. There’s only one way to play this game, and that is with everything you've got. Sometimes when you come in young, you dip your toe in the water a little bit instead of just letting it rip, and he has really learned how to play as hard as he can.”

During the bye week, members of NU's staff, including Scott Frost, hit the recruiting trail: "The response was awesome," he says."

Scott Frost's Huskers have failed to summit Mt. Close. The key? 'Get an inch better'

C-l-o-s-e. The five-letter word has become a source of frustration among coaches, players, and yes, the fans. How does NU overcome it?

One note from Scott Frost centers on quarterback Adrian Martinez, who the coach says didn't run the option much Saturday because of his health.

We do, however, know one time slot the Nebraska-Ohio State game at Memorial Stadium will not be in.

Husker QB Adrian Martinez says he won't think about his future until after season; 'All attention on Purdue'

All but eight of the Huskers’ scholarship players have eligibility remaining after this season, but no decision will be monitored more than Martinez's.

Erik Chinander — who coached in NU's Oct. 16 loss at Minnesota — said he learned nearly everything about being a coach from his father.

Sacks, kicks, empties and explosives: The numbers that will determine whether NU can mount a post-bye push

Parker Gabriel crunches the numbers that could result in 6, as in the number of wins needed for Nebraska to sneak into a bowl game this season.

RB Rahmir Johnson should be ready to go for Nebraska against a Purdue defense that is "much improved," according to NU OC Matt Lubick.

Life in the Red Podcast: Taking stock of the Huskers, talkin' transfer portal and what needs to improve on offense

The (first) bye week episode. On the heels of Scott Frost's recruiting comments, the guys rank NU's positional needs — and much more.

A little break never hurt anyone. The Huskers seemed to enjoy some time away from the game, and had a "spring in their step" when they returned.