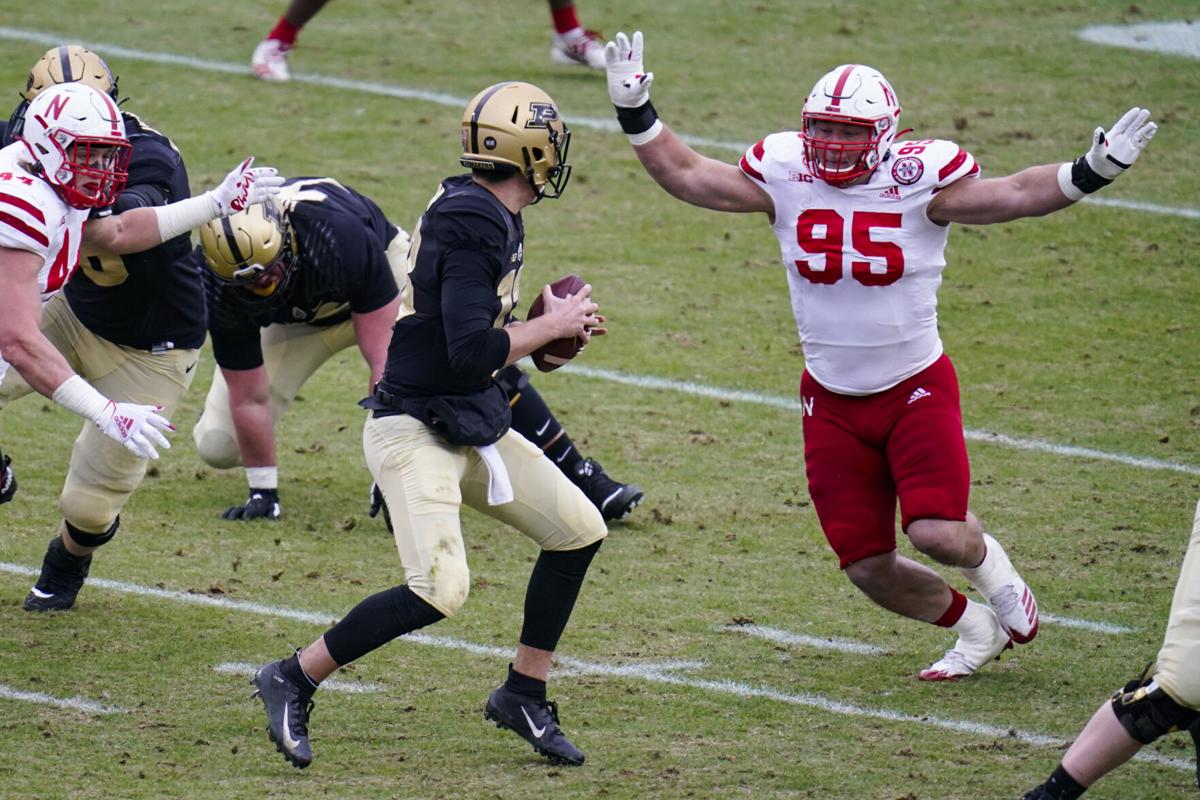 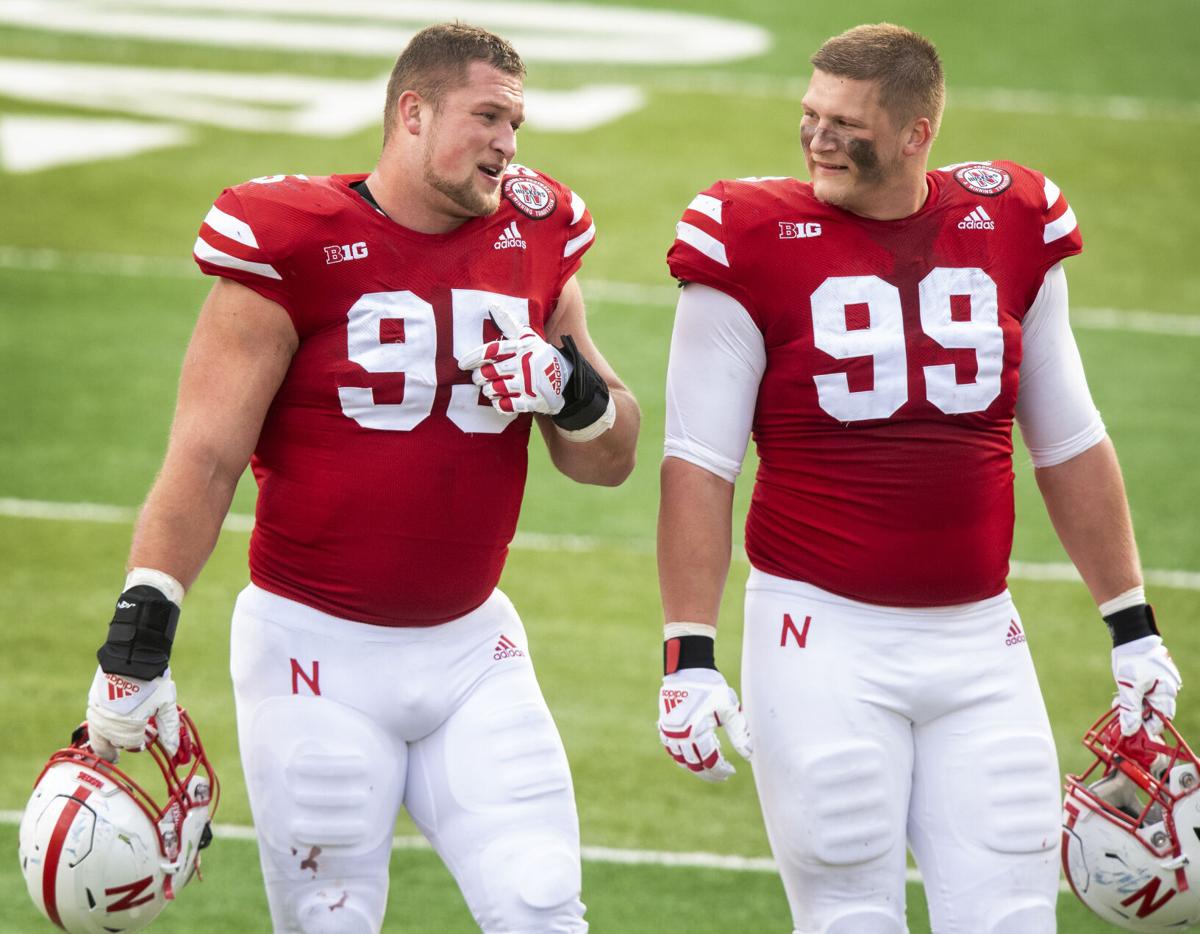 Nebraska's Ben Stille (95) and Ty Robinson walk off the field after the Huskers' 30-23 win over Penn State in November at Memorial Stadium. With Stille returning in 2021 and continued improvement from Robinson, sophomore Casey Rogers and junior Damion Daniels, the Huskers' defensive line could be a position of strength next season.

The Ashland-Greenwood graduate turned in his best season so far in 2020 and was an anchor up front for NU. Now he’ll be back working again with defensive line coach Tony Tuioti and defensive coordinator Erik Chinander.

Huskers will have senior safety pair Deontai Williams, Marquel Dismuke back for 2021

Stille's return marks the end of a big week of announcements for the Blackshirts. NU also has senior outside linebacker JoJo Domann, inside linebacker Will Honas and safeties Deontai Williams and Marquel Dismuke back in the fold for the 2021 season along with junior defensive back Cam Taylor-Britt.

In fact, the Huskers now have nine of 11 starters from the 2020 season in line to return. When Honas announced his intention to play a sixth season on Thursday, that gave NU its top eight tacklers back.

The two starters Nebraska must replace: senior inside linebacker Collin Miller, who medically retired after a mid-season neck injury, and senior cornerback Dicaprio Bootle, who announced recently that he's entering the 2021 NFL Draft.

Chinander said last month that he was hoping Stille, a 6-foot-5, 295-pounder, would decide to come back.

“He’s done a really good job of developing his body and developing his skill set,” Chinander said. “I really, truly believe that his best football has been played in the last few games and he’s going to continue to get better. Like I said, I hope we get him back for another year because I think he’s on the verge of having a big-time breakout here.”

Blessed to take advantage of another year to compete with my brothers, coaches, and for the best fans in college football. #GBR pic.twitter.com/f0jhCzMryi

Now he is back and NU’s defensive line looks like a potential position of strength. Sophomore Casey Rogers and redshirt freshman Ty Robinson both took big steps forward in 2020 in their first extended action and junior Damion Daniels has progressed steadily into being a productive player.

NU also will get Deontre Thomas back after the junior missed all but two games in 2020 because of injuries. A full offseason should help junior college transfer Jordon Riley, and there are still high hopes for sophomore Tate Wildeman, redshirt freshman Mosai Newsom and others.

Even with every member of that group eligible for multiple seasons going forward, Stille’s return should be a sizable help to Nebraska because he’s turned himself into a versatile, productive player. He can play on the end of NU’s three-man fronts and also showed himself capable of holding up inside in four-down fronts and in pass-rush situations.

Now the challenge for Chinander's veteran defense will be to take another step forward in 2021 after progress in each of his three seasons in charge.

The Huskers improved from 5.96 yards allowed per play against Big Ten teams in 2019 to 5.46 in 2020, a number that ended up No. 44 nationally. The Huskers improved on third down against conference teams, too. The finishing number in 2020 (40.12%) isn't particularly impressive by itself, but Nebraska finished by allowing just 24.5% conversions (13-of-53) on third downs over the second half of the season.

One area that will be a focus: Turnovers. Nebraska forced just seven over eight games this fall. Only Maryland and Michigan forced fewer.

Decision made: Tracking the next step for Husker football upperclassmen

Nebraska's Ben Stille (95) and Ty Robinson walk off the field after the Huskers' 30-23 win over Penn State in November at Memorial Stadium. With Stille returning in 2021 and continued improvement from Robinson, sophomore Casey Rogers and junior Damion Daniels, the Huskers' defensive line could be a position of strength next season.