US employers add a modest 245,000 jobs as virus intensifies

A unique team for a unique season, Nebraska prepares to embark down unknown road in Hoiberg's second year
View Comments
Share this
{{featured_button_text}}
1 of 2 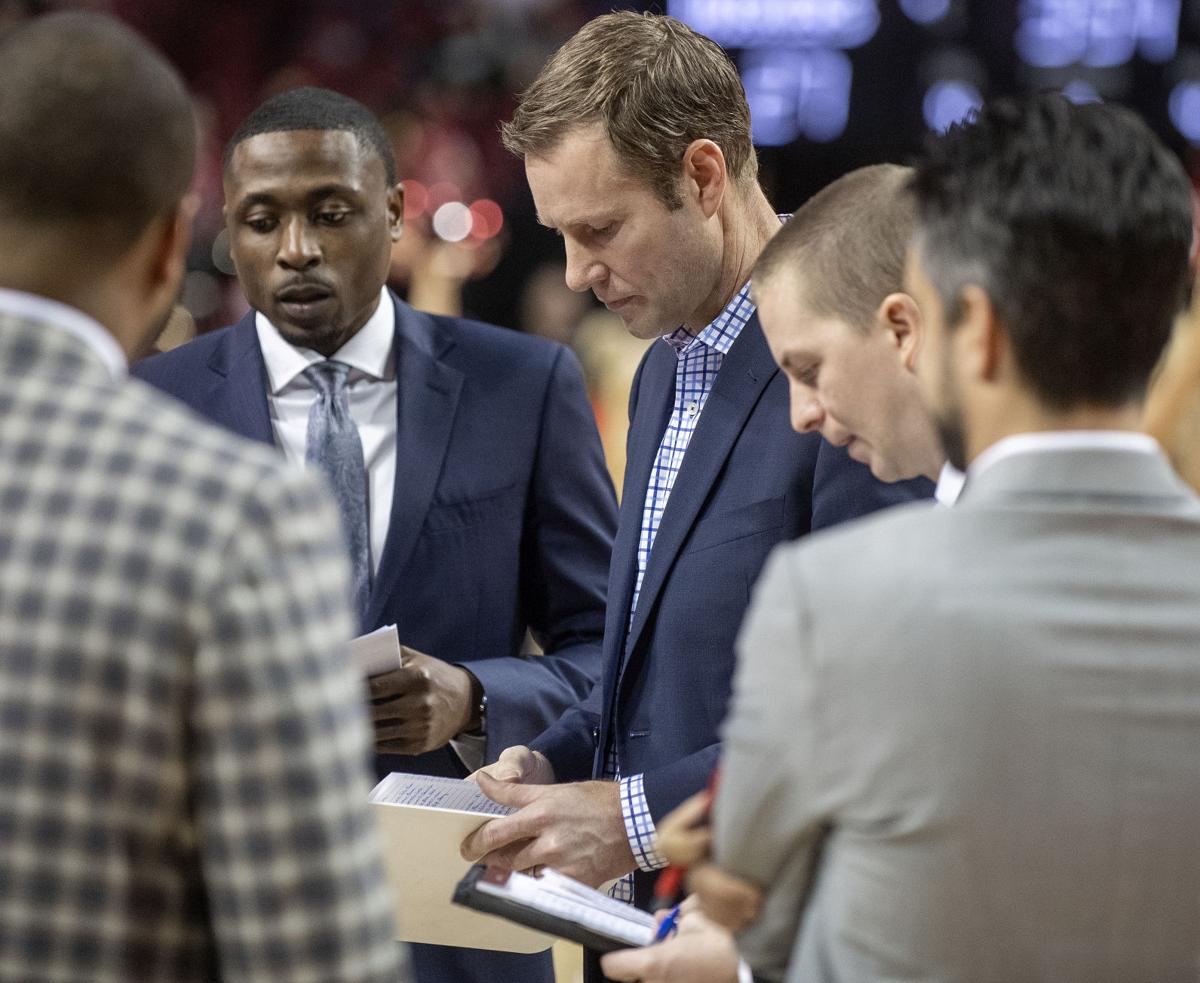 Nebraska head coach Fred Hoiberg confers with the coaching staff during a first-half time out against Michigan on Feb. 20 at Pinnacle Bank Arena. 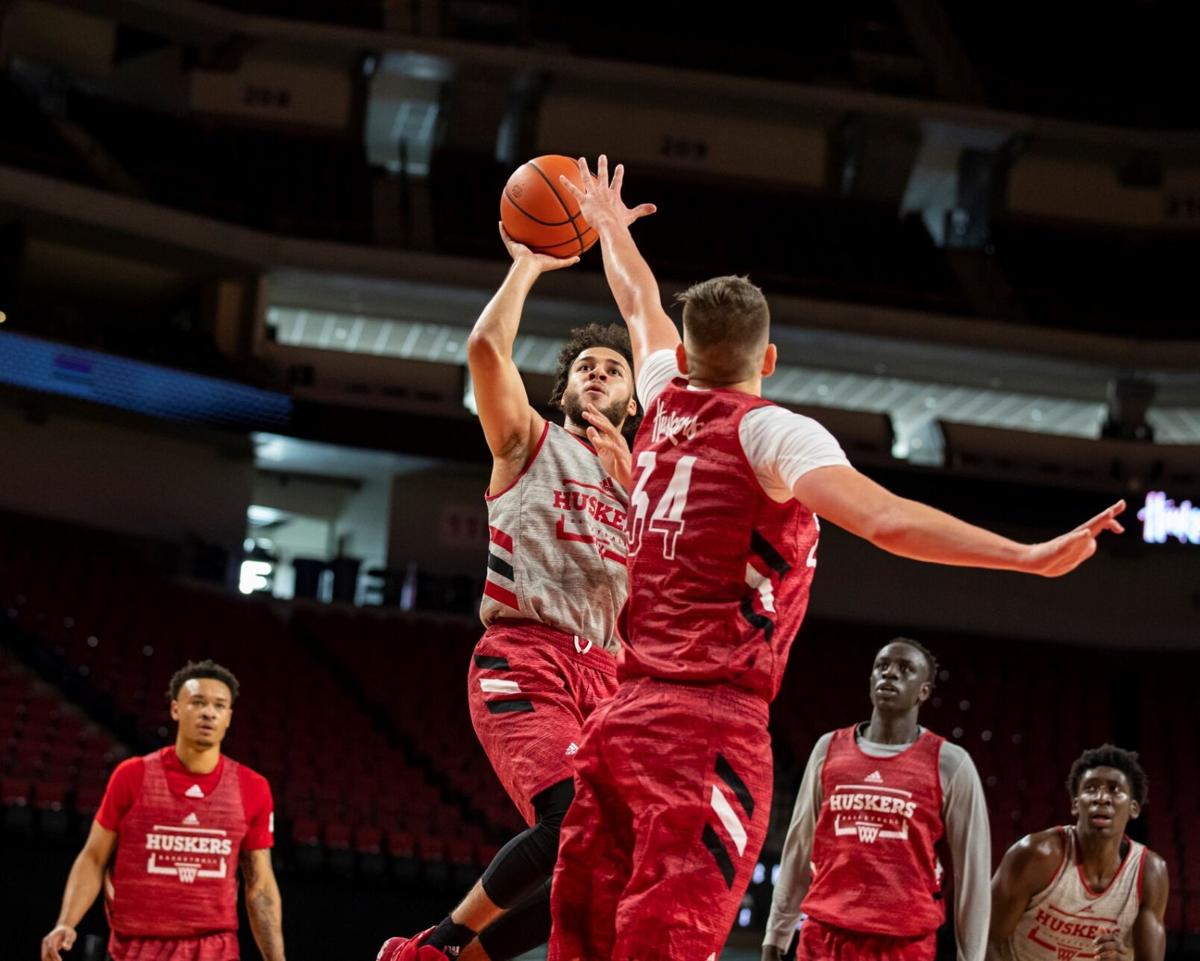 Kobe Webster (shooting) is one of several newcomers on this year's Nebraska men's basketball team.

Look, we all know this is gonna be weird.

The Nebraska men's basketball team has scheduled games, taken those games off the schedule, tried to put together a bubble, and seen that bubble all but pop.

And the season isn't even here yet.

Ready or not, it's time for hoops. Get to know Fred Hoiberg's second Nebraska men's basketball team

What we know, what we don't: Breaking down the Nebraska men's basketball team's storylines

It starts Wednesday, maybe. And if all goes according to plan, will end some time in March. Possibly.

"It's a road and it's a journey, man," Husker guard Dalano Banton said earlier this fall.

If it wasn't already evident, this is going to be a season like no other. COVID-19 and everything that comes with it will make sure 2020-21 is as unique a season as any for a program that has had its share of unique in recent years.

Thing is, Nebraska might have just the unique team to match.

A 6-foot-9 point guard who is a triple-double threat. A 6-9 power forward whose specialty is making three-pointers. An 18-year-old Frenchman who already had a year of Big Ten battles under his belt, and a 22-year-old Icelander who went from barely staying on the team to becoming a respected and productive leader.

While the lure of 2021, with what should be an experienced core and a highly touted recruiting class, will be hard to ignore, Nebraska isn't planning to hit fast-forward.

The hope for now is that the Huskers don't have to press pause too many times.

"I think the biggest thing we have talked to our players about is, all we can do is worry about the things we can control. And that's coming in the gym and working hard every day, doing the right things to try and do everything we can to where COVID doesn't go through our team," Nebraska coach Fred Hoiberg said. "Now that we're approaching the season and the rule of having to sit out an extended period if we do have it, our guys have bought into it."

Buy-ins matter, especially for a team that won seven games last season and doesn't know how many it will get this year. Could NU win 15 games? Will it even play 15 games?

No one knows. Hoiberg has said he likes his second team in Lincoln, but every coach likes their team this time of year. What will matter more is how much the Huskers like each other.

"It all starts in the locker room before you go on the court. If everybody's bumping heads, then things aren't going to turn out too good," said Lat Mayen, the above-mentioned 6-9 three-point marksman. "One thing I've known from previous schools I've been to, this is probably the best team I've been around outside of basketball.

"All that stuff relates to on the court, and you just love everybody that likes being around each other. And that really translates a lot."

What it translates to in regard to wins and losses may matter little in the context of the season, whenever and however it ends. Success might be measured more in the ability to simply show up with enough healthy bodies to play every night, no matter whether the opponent can do the same.

At any given moment over the past few weeks, somewhere between 10 and 20 or so Division I programs have been in various stages of shutdown because of positive virus tests and contact tracing. Some of the game's most prominent names, including Michigan coach Tom Izzo and Syracuse coach Jim Boeheim, have come down with the coronavirus.

New Mexico State recently announced it will move its entire operation to Phoenix to practice and play because health regulations in the Aggies' home state don't allow for the team to practice there. The Ivy League, which was the first conference to cancel sports back in the spring, has already canceled all of its winter sports, as well.

And, oh, by the way, the NCAA announced a couple of weeks ago that its premier event, the men's basketball tournament, will be held in one city. The NCAA Tournament produces nearly a billion dollars of revenue that fund the NCAA and provide a lifeline to many of its schools with the money that is distributed. The event will happen, largely because it has to.

So much of what happens over the next five months will be out of Nebraska's, or anyone else's, control.

For now, all NU can do is try to take the next step forward as a program. Hoiberg started a run of four consecutive NCAA Tournament trips in his second season at Iowa State. He won two Big 12 Tournaments along the way, as well.

For the Huskers, staying viable long enough to even think about such a jump in a volatile season will be challenging enough.

Three games into the season, and the Nebraska men’s basketball team might be establishing an identity — as a team that can rely on its defense.

Teddy Allen started to cook, and Nebraska, finally, started to pull away.

The Huskers' Dec. 25 home game against Michigan will tip off at 5 p.m. and air on BTN.

A stat-stuffer on the court and a smiling leader off of it, Dalano Banton 'doesn't have a bad day' for Huskers

Banton's personality has been every bit as important to the Nebraska men's basketball team through this bizarre year as his game on the court.

Coach Fred Hoiberg said Walker's suspension was shortened to put it on par with the shortened regular season.

Coach Fred Hoiberg said Walker's suspension was shortened to put it on par with the shortened regular season.

Teddy Allen started to cook, and Nebraska, finally, started to pull away.

A stat-stuffer on the court and a smiling leader off of it, Dalano Banton 'doesn't have a bad day' for Huskers

Banton's personality has been every bit as important to the Nebraska men's basketball team through this bizarre year as his game on the court.

Nebraska head coach Fred Hoiberg confers with the coaching staff during a first-half time out against Michigan on Feb. 20 at Pinnacle Bank Arena.

Kobe Webster (shooting) is one of several newcomers on this year's Nebraska men's basketball team.