Steven M. Sipple: Moos talks Black Friday, his altered existence, and his son opting out at Cal
View Comments
Share this
{{featured_button_text}}
1 of 2 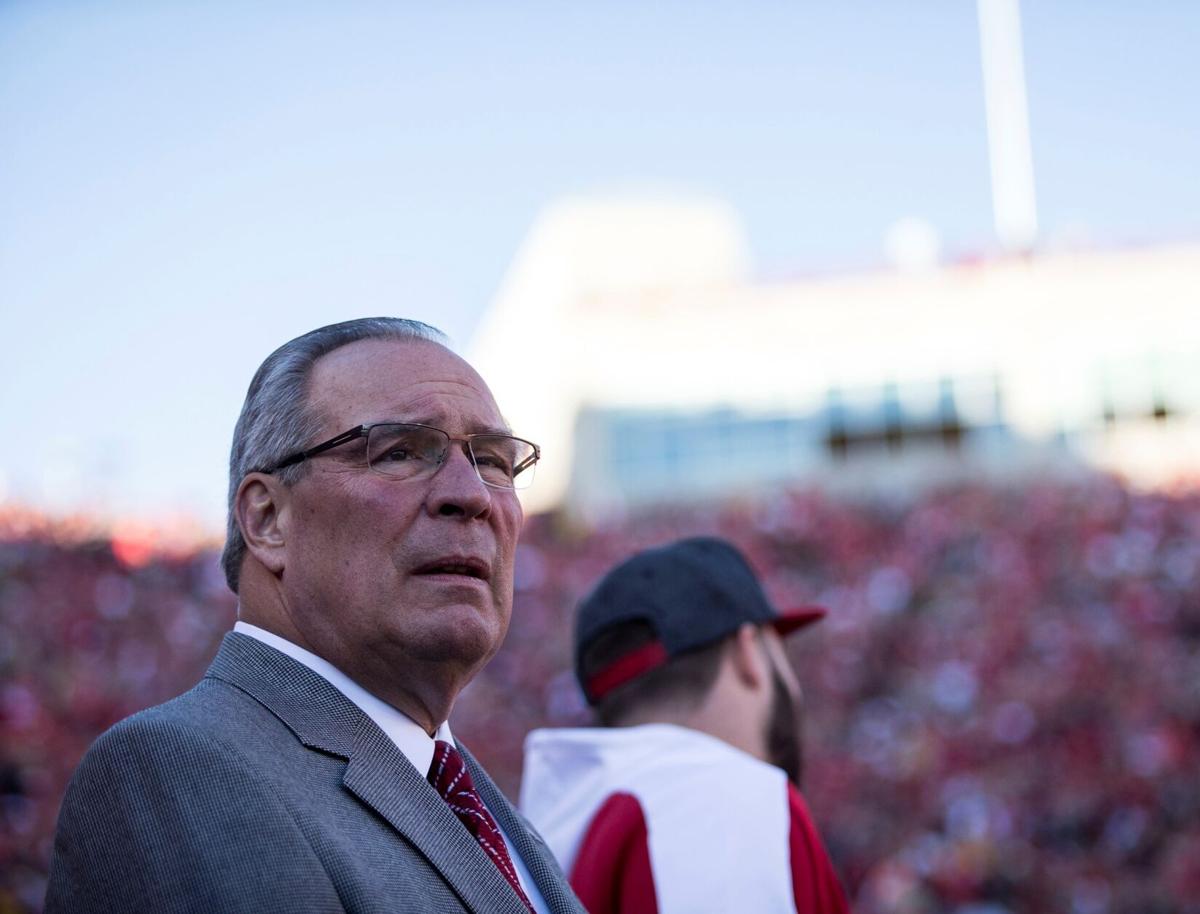 Nebraska athletic director Bill Moos watches the Huskers warm up on the sidelines before a game against Iowa in 2017 at Memorial Stadium. 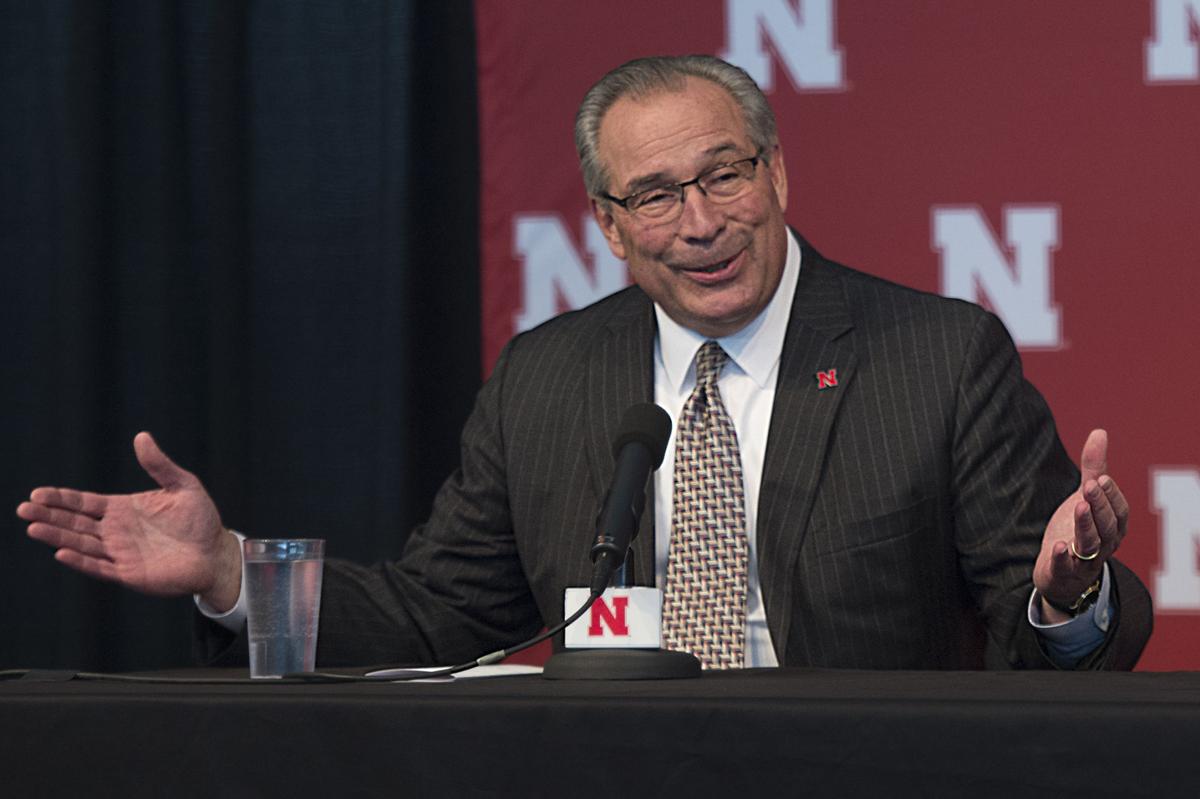 With so much pandemic-related awkwardness in college football, I wanted to keep this simple.

Ask Bill Moos a handful of questions, and hear what he had to say. After all, the third-year Nebraska athletic director adores the college game. It's largely what fuels him, especially this time of year. Yes, you hear enthusiasm in his voice even during this very strange season. So let's do this.

He fought for Nebraska and Iowa playing on Black Friday, and it'll happen this season. Why was it so important?

"I like traditions. I love rivalries," he said. "And whatever we can salvage out of this season that's somewhat a norm and somewhat a tradition, I'm going to endorse. The Black Friday piece, and having it with Iowa, was of paramount importance."

The Big Ten had announced in 2017 that Nebraska would close the 2020 and 2021 seasons against Minnesota. The Huskers and Gophers will play on the final weekend of the regular season in 2021. Then, from 2022 forward, it'll be the Huskers and Hawkeyes on Black Friday.

"I had to kind of hold my breath and say, 'OK, we'll do the Minnesota deal for now,'" Moos said. "But this way, hey, we get to continue to develop that rivalry with Iowa. That's one good thing that's come out of all this. I was pleased the conference and really the TV partners took that under consideration, and we were able to pull it off."

Moos says it hasn't been difficult for him to watch college football even as the Big Ten has waited on the sidelines. Trouble is, he hasn't had much time for casual watching because of his full schedule.

"We've got so many things we're working on to get men's and women's basketball started. You know, life is just different now, and it's very demanding in different ways," he said, noting he made his first public appearance in seven months last week when he had a speaking engagement at the Graduate Lincoln downtown.

"I spoke in front of a group of county officials. It was a wonderful group," he said. "I emphasized that, hey, I haven't done this in seven months and in my first 20 months on the job, I did 289 public appearances all over the state."

These days, Moos spends much of his time in Zoom sessions. Which isn't exactly his style. He's a man of the people, and a person's sense of humor tends to come through better in person.

"Before March of last spring, I thought Zoom was a hot breakfast cereal that I used to eat on the ranch in Edwall," he said of the rural community in Washington state where he grew up. "My kids are amazed how well I handle Zoom. It's mostly because I have a lot of practice."

Has the college football season transpired about the way you expected?

"I think at last count, there has been about 30 cancellations or postponements of games," Moos said. "I was hoping that wouldn't be the case. But I wasn't optimistic."

That's interesting because Moos is one of the most optimistic people I've ever met.

"I think people are being extremely cautious, which they should be," he said.

He thinks the Big Ten should benefit from being able to watch how other conferences manage their way through the pandemic.

"We're pretty streamlined in what we're going to be doing on Saturdays (in the Big Ten), and I'm hoping we can get off to a great start and maybe ease up on some of the restrictions mid-to-late season," he said.

You have a son, Ben Moos, who plays outside linebacker at Cal. What has his pandemic experience been like from a student-athlete's perspective?

"Our son Ben opted out," the elder Moos said. "Once he was sure he could get an extra year (of eligibility), he felt it was in his best interests to opt out because of a wrist injury he's had. It was a grueling decision. But I supported him, and he's really loaded up academically. He could be in position to graduate in the spring or after the first term of the summer, and still have two years to play."

Moos spent a couple of days at Cal with his son to provide support in advance of the decision.

"We sat at a table and wrote out the pros and cons," Bill said. "I told him it was his decision. I know he feels good about it. He wants to play, but he wants to be healthy when he plays. I told him, 'Chances are, you'll have two years with the ability to play in front of full crowds and heck, you're going to be 24 or 25 years old when you finish. It's going to be like you went to BYU.'"

My read is Clemson (4-0) is clearly the nation's best team. Can anyone catch the Tigers?

"I don't that know for sure," Moos said. "But what you've heard me preach is it's one thing to get to the top, and another to stay there."

On the other hand, "I think Clemson, once it secured the top ground (in winning national championships in 2016 and 2018), has done an outstanding job of protecting it. They're reinvesting and conducting themselves like a champion, with confidence but also a sense of class. They've earned their status, and it's up to someone else to take it away from them.

"You know the saying: It's much harder being the hunted than the hunter, and they're the hunted at the very highest level."

Clemson, the national runner-up in 2019, plays Saturday at Georgia Tech as the college season moves forward, albeit awkwardly.

No love lost: These players drive Husker fans nuts like no other

Every Wisconsin running back since NU joined the Big Ten

Scott Frost's low-key QB announcement struck the right note. No reason for a coach to contribute to hysteria.

You wonder if watching the second half of last season's Iowa game offers clues as to how Austin wants the offense to operate.

Will Omar Manning play Week 1? Steven M. Sipple doesn't think so. And what does he make of the QB talk? Well, for starters, it's genuine.

Dedrick Mills will get plenty of chances this season to run the ball as NU's "bell cow" back. He's probably kicking the stall in anticipation.

If you have to ask why Frost must proceed intelligently in coming weeks, you're unfamiliar with the first four games on NU's schedule.

Nebraska will face three of the nation's strongest programs in its first four games this season. Emphasis on program.

Nebraska athletic director Bill Moos watches the Huskers warm up on the sidelines before a game against Iowa in 2017 at Memorial Stadium.