Nebraska volleyball head coach John Cook instructs the team during a volleyball practice on Dec. 5 at the Devaney Sports Center. 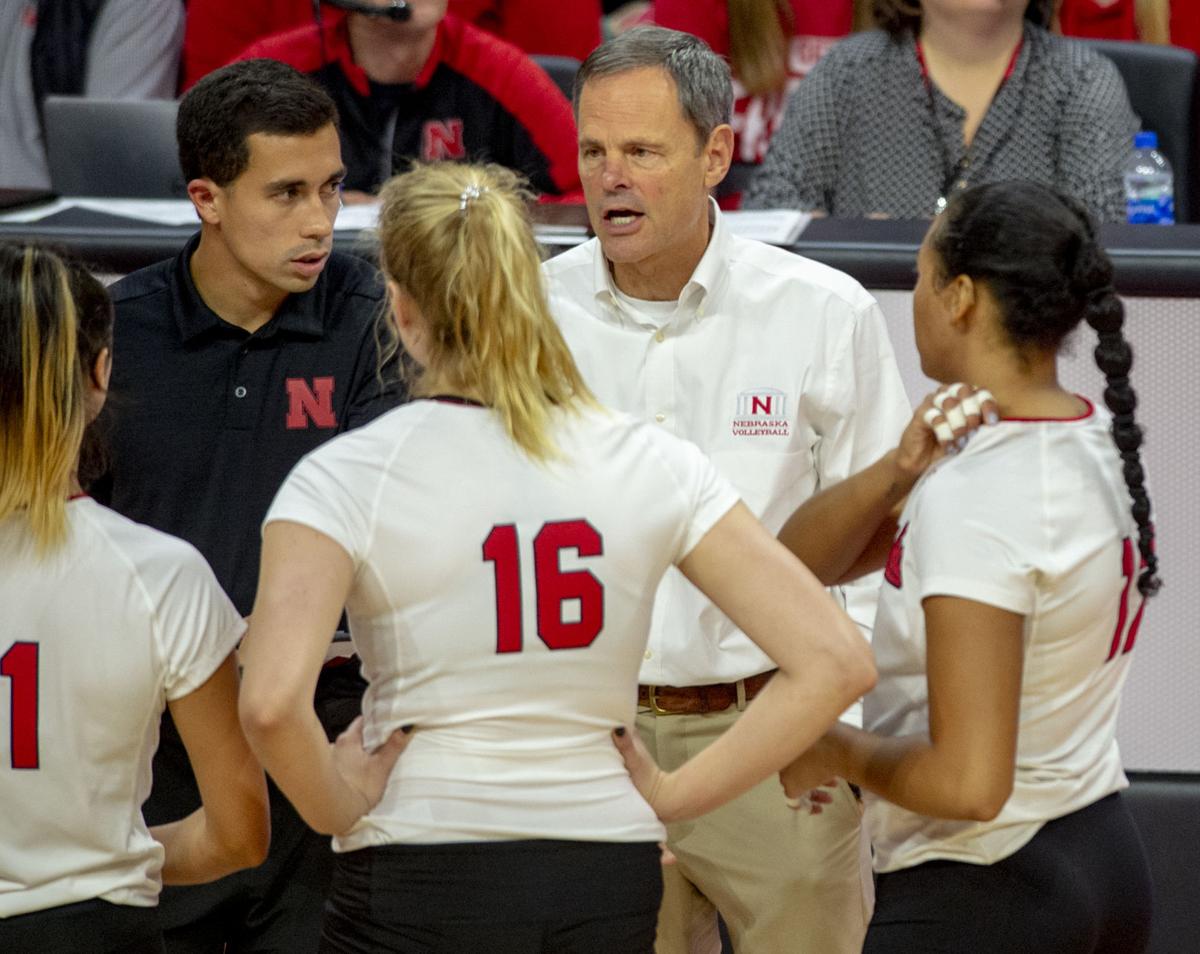 Nebraska head coach John Cook talks to his team while Wisconsin challenges a call during a match in October at the Devaney Sports Center. 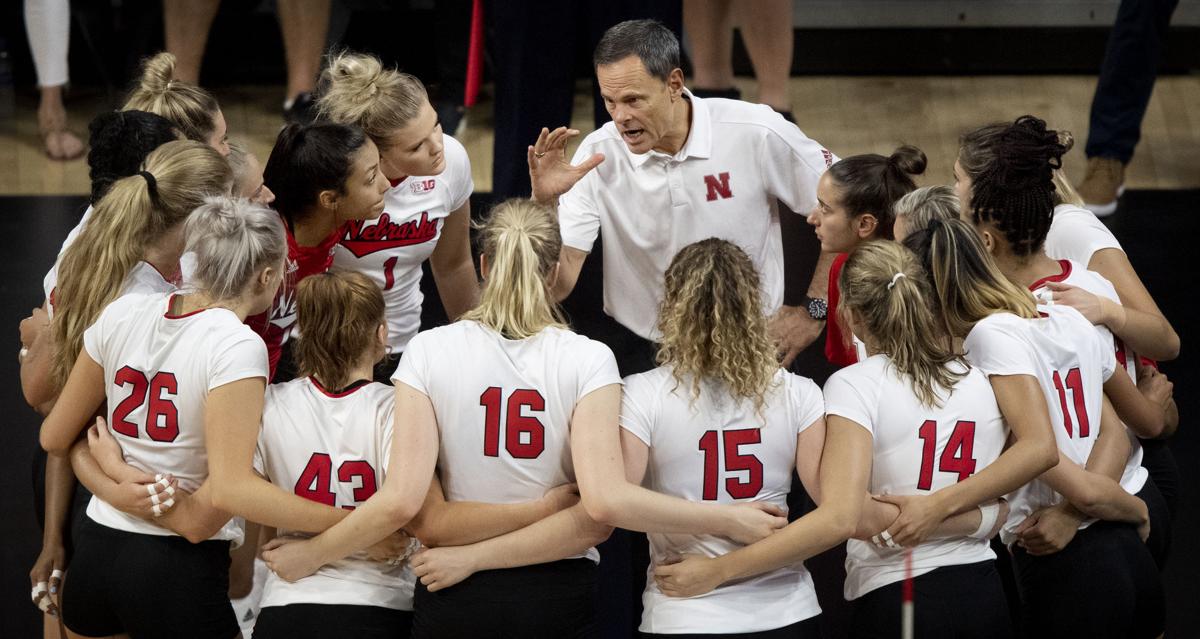 Nebraska head coach John Cook (top center) talks to his assembled players before they take on Stanford in September 2019 at Devaney Sports Center. 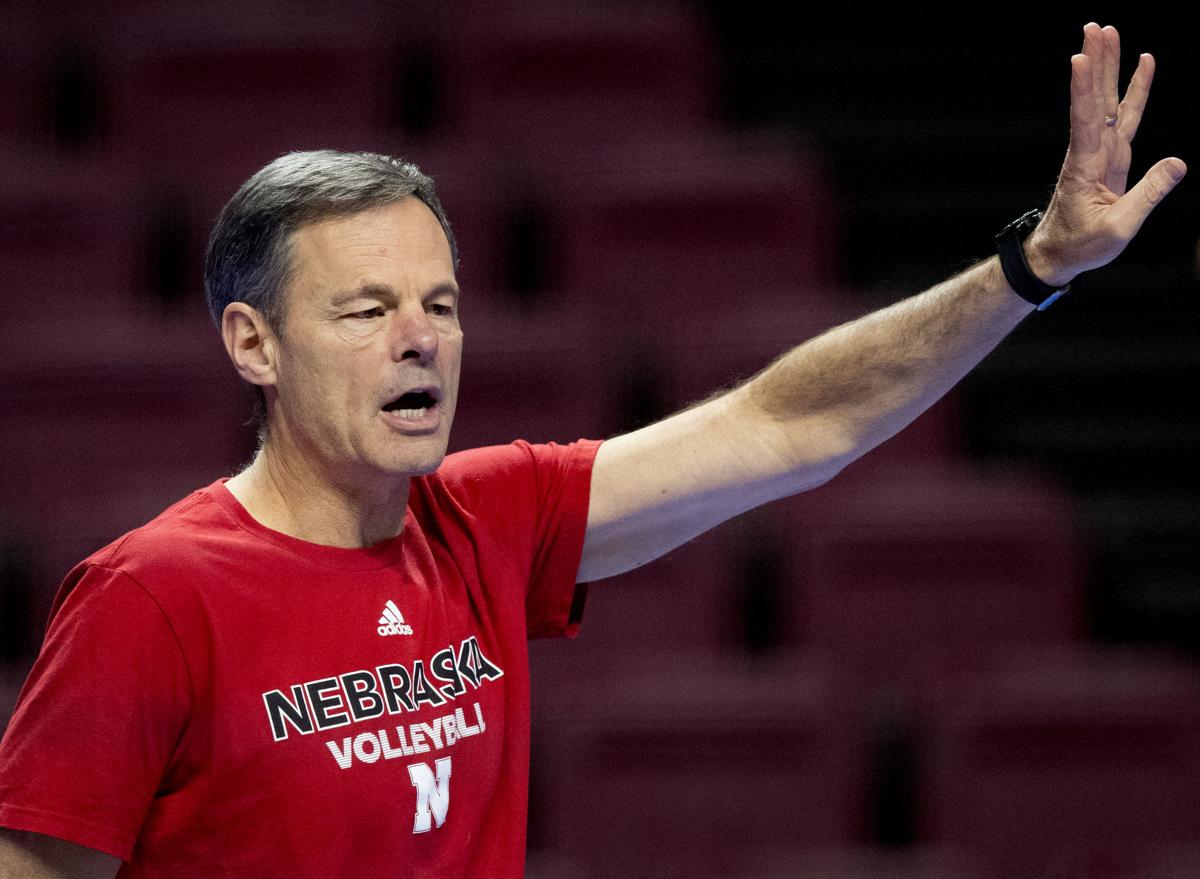 Nebraska head coach John Cook instructs the team as they prepare for a NCAA Tournament match earlier this month against Kentucky during practice at Maturi Pavilion in Minneapolis.

Nebraska volleyball may have to go without a nonconference season altogether.

Husker coach John Cook, on a podcast released Thursday evening by the athletic department, said he thinks his program might be in for a conference-only slate.

"Based on all the meetings we've had and everything, it's probably leaning toward a Big Ten-only schedule," Cook said. "No nonconference and maybe we'll be allowed to play Creighton and UNO, which are close here. They don't want anybody traveling and they don't want what they call cross-pollination, meaning, if we go to California, to Texas, to Florida, we're going to different schools with different protocols and everything. Whereas in the Big Ten, everybody's going to be on the same page.

"Then also the cost-containment part of it, but that doesn't apply to us because if we can have fans, we make money having matches at home. So that will hurt us not being able to have those nonconference matches."

One day after the Journal Star confirmed that the program was delaying sending out season ticket forms because of uncertainty with the schedule, Cook said NU is working hard to get at least some fans into the Devaney Center at some point this fall.

"I know (associate athletic director for event management Matt Davidson) runs our events and they're working on a plan, and I think there are stages to bring our fans back slowly and build it. They're working on that plan and I don't know all the details of it, but I know the goal is Nebraska wants fans and we want sports and to get it back to normal as much as we can while keeping everybody safe."

As for a potential postseason, Cook said there are several options on the table. The NCAA is slated to have the Final Four in Omaha and Cook has made no bones about trying to get his veteran team to that stage given the prospect of a hometown title run.

All in all, it's been a wild few weeks of planning and searching for a way forward.

"It's almost changing by the hour," Cook said. "It's been pretty mind-boggling everything that's been thrown around and how it's changing."

Cook also said Nebraska has been working with a clinic in Omaha to test student-athletes and that they had a plan in place to get back in their training facility recently, but it was scuttled by the NCAA for now.

"We have no idea. Everything is changing, literally it changes day to day," Cook said. "Nebraska people will love this. We had everything set up, everybody tested and everybody was ready to go here, starting Monday. They were all going to be back for that and we were going to be able to use our facilities, then the NCAA last week all of a sudden said, 'Sorry, you can't use your facilities.' For everybody. I call it the anti-Nebraska rule.

"We've been very proactive and a lot of schools around the country have been studying what we're doing. We're on the cutting edge of trying to keep the athletes safe, get them back here, keep everybody back here safe. We're working with a medical center up in Omaha with the testing and everything and they're doing some studies.

"It's a pretty cool deal and I think we're ahead of 99 percent of the country."

The NCAA this week gave the go-ahead for football, men's basketball and women's basketball to return to team facilities for voluntary workouts beginning June 1, though the Big Ten will still have to give a green light, too. Cook's comments suggest the volleyball team still doesn't know exactly when it will be back to work.

When the college volleyball season begins, will Nebraska have an advantage?

As clouds of uncertainty surround the upcoming season, the Huskers have the luxury of returning its entire starting lineup.

Nebraska is delaying volleyball season ticket renewals due to pandemic-related uncertainty, the school confirmed to the Journal Star on Wednesday.

The Nebraska volleyball program is a long way from Hawaii, but there were several local connections that helped get Keonilei Akana.

Nebraska volleyball head coach John Cook instructs the team during a volleyball practice on Dec. 5 at the Devaney Sports Center.

Nebraska head coach John Cook talks to his team while Wisconsin challenges a call during a match in October at the Devaney Sports Center.

Nebraska head coach John Cook (top center) talks to his assembled players before they take on Stanford in September 2019 at Devaney Sports Center.

Nebraska head coach John Cook instructs the team as they prepare for a NCAA Tournament match earlier this month against Kentucky during practice at Maturi Pavilion in Minneapolis.