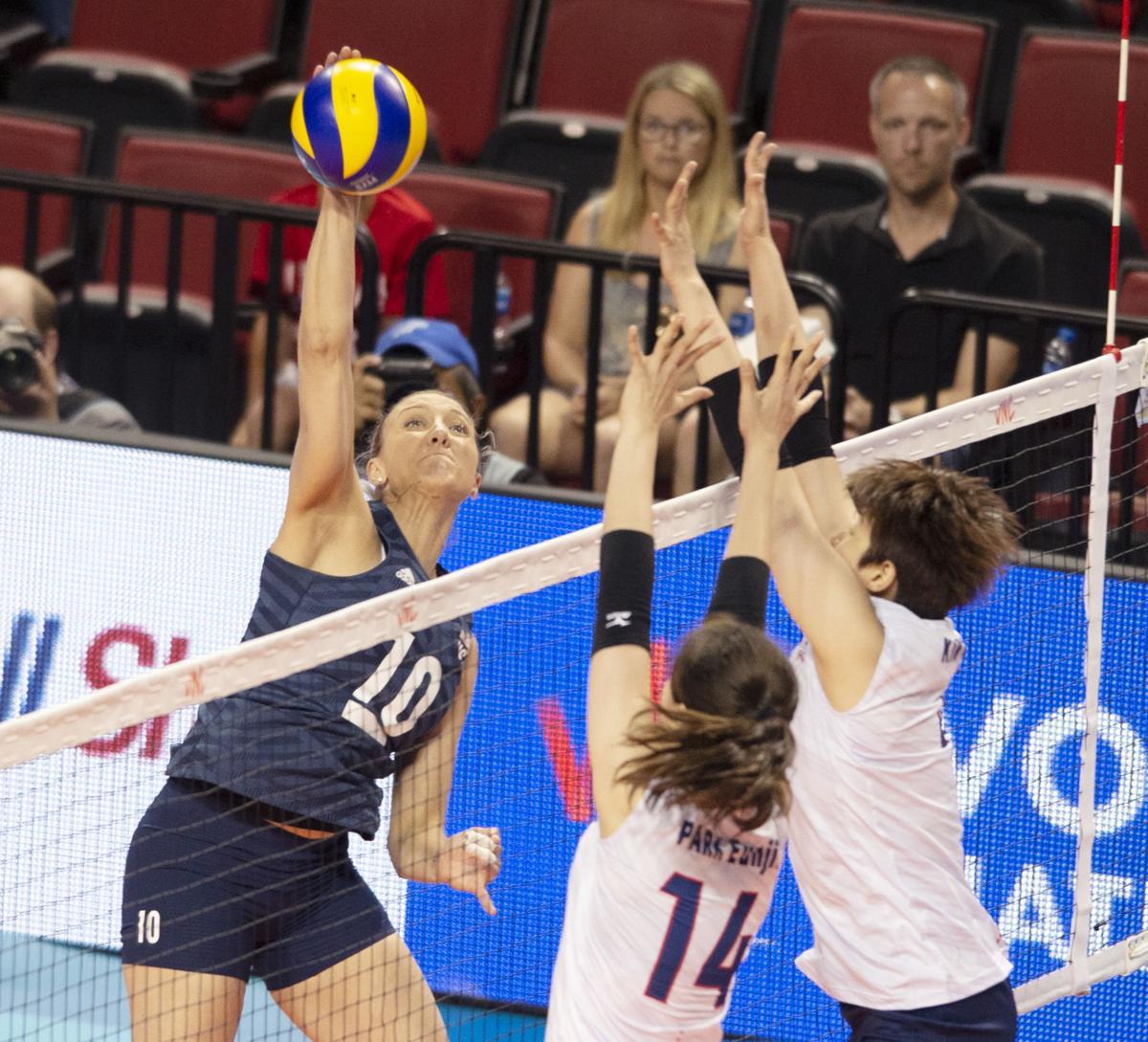 Former Husker Jordan Larson rises for a spike against Korea's Park Eunjin (14) during the United States national team's win in a Volleyball Nations League match in 2019 at Pinnacle Bank Arena. While the 2020 Olympics were postponed, Larson still hopes to make the U.S. team whenever the Games are held. 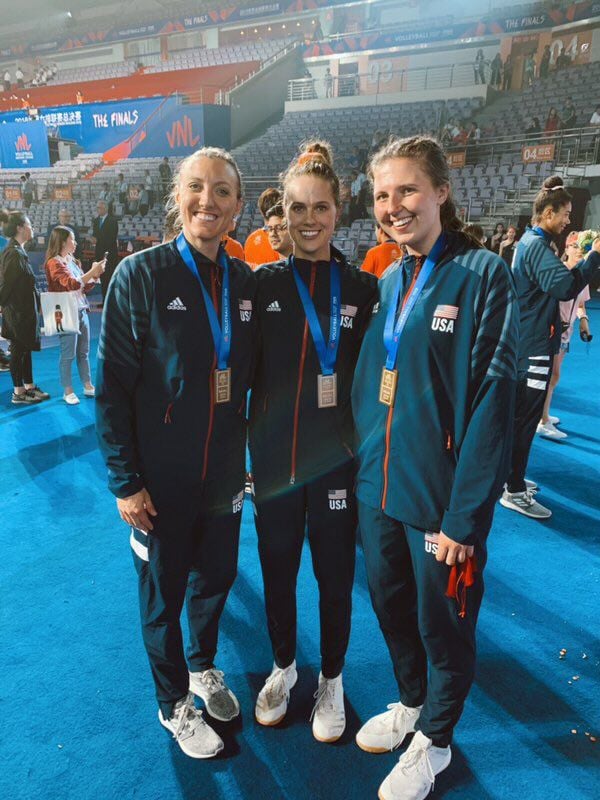 Jordan Larson has played volleyball in the Olympics twice — she won a silver medal with the United States team in 2012 and bronze in 2016 — and was planning to make her third Olympic team this summer for the Tokyo Games.

Those plans are now on hold for Larson, and a few other former Nebraska volleyball players, with the news Tuesday that the Olympics have officially been postponed, potentially one year, due to the COVID-19 pandemic. The Olympics were scheduled for July 24 to Aug. 7.

The Olympics have been a significant part of Larson’s volleyball career — first as a goal she had from a young age, and later something that motivated her after making her first Olympic team — so the news was disappointing.

On hold: Tokyo Olympics postponed to 2021

But she’s quickly been able to consider the positives of the situation. The biggest one is that a postponement is better than a cancellation for the once-every-four-years event. An Olympic cancellation is something Larson had thought about. Larson is 33 years old, and doesn’t know for certain how many more years she’ll continue to play at the world-class level she is now.

Other positives are that Larson can cut back some parts of her training (mainly some of the jumping) while also spending more time on strength training and conditioning.

And Larson is safe and healthy. This season, for the first time in a 12-year professional career she played in China, one of the countries with the largest number of COVID-19 cases and deaths.

But a short season this year meant that her pro season had finished, and Larson was back in the U.S. on Jan. 15. The first time she heard about the coronavirus was while watching the news in California, when she heard they were screening some people coming off international flights for the virus.

“We were lucky to have gotten out of China at the time that we did,” Larson said.

Playing for Shanghai in the Chinese Super League, Larson’s team advanced to the finals before losing. While some of the pro leagues normally keep playing until April, in China the season had finished.

Nearly all of the players on the United States national team — and hundreds of other former college players — play professional volleyball, in 31 different countries, for most of the year before rejoining the national team during the summer.

“So we typically have the majority of people in Italy, and then Turkey, and then we have some people in Brazil, France, Germany, Japan, Russia,” Larson said. “Just kind of all over the place.”

Those are some of the countries with the most coronavirus cases. As the pro leagues began to shut down because of coronavirus, the players were able to return to the United States, and several of the players had been training or rehabbing injuries in California until recently.

“Some of us were already back training, and then kind of when things got bad in Italy, basically all the girls came home from Italy and then did a 14-day self-quarantine,” Larson said. “And then Turkey just kind of shut down, so people from Turkey just got home. So pretty much everybody is home. There is one person still in Italy, but she’s healthy and fine. So everybody is actually in the (United States), which is kind of cool because we are never in the states at this time of the year. So I hope the chances for us to train can happen sooner rather than later. But obviously we have some time now, so the rush isn’t there.”

Ex-Husker Kelsey Robinson arrived back to the U.S. from Turkey just three days ago. Mikaela Foecke and her husband returned from Italy last week.

Since she left China, Larson had been training about five days a week at the USA volleyball gym in Anaheim, California. But now Larson is doing workouts at home.

Larson wants to play in the Olympics whenever they happen, hopefully in 2021.

“Yes, definitely,” she said. “I’m in it. I’m committed, and I’m going to try and be there if my body and mind allows me.”

Robinson was also on the Olympic team in 2016, and Justine Wong-Orantes and Foecke also played with the top national team last year.

For the first time in a long time, Larson doesn’t know when her next volleyball match will be. She played this season with a one-year contract in China and may return there. But right now there are many unknowns for the best players in the world.

“Obviously I know this is a difficult time for everyone,” Larson said. “I just hope people are still supportive of Team USA. We have a big mission, and I think now we just have a little bit more time to prepare. And for me I’m excited for that, and I hope everybody else is, too.”

Former Husker Jordan Larson rises for a spike against Korea's Park Eunjin (14) during the United States national team's win in a Volleyball Nations League match in 2019 at Pinnacle Bank Arena. While the 2020 Olympics were postponed, Larson still hopes to make the U.S. team whenever the Games are held.