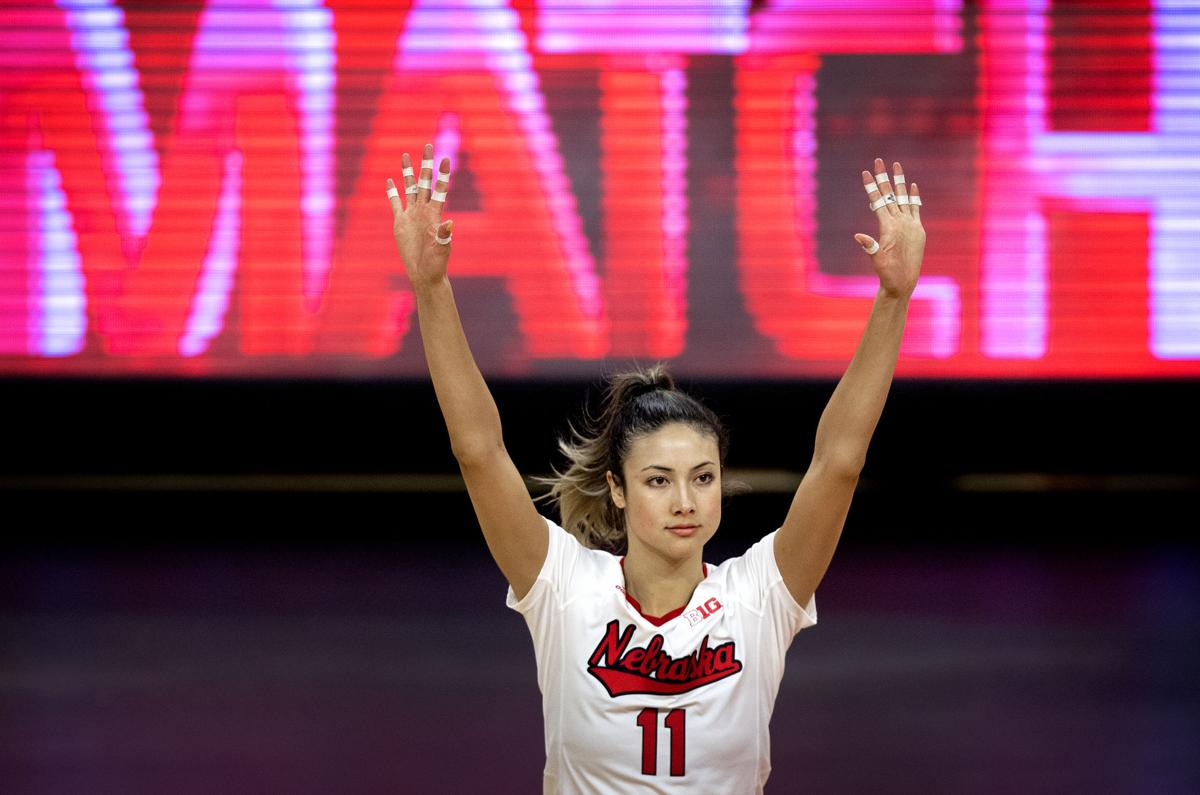 It took five sets, but Nebraska’s Lexi Sun (11) and the Huskers held off Iowa in a match that lasted nearly three hours Saturday at the Devaney Sports Center. 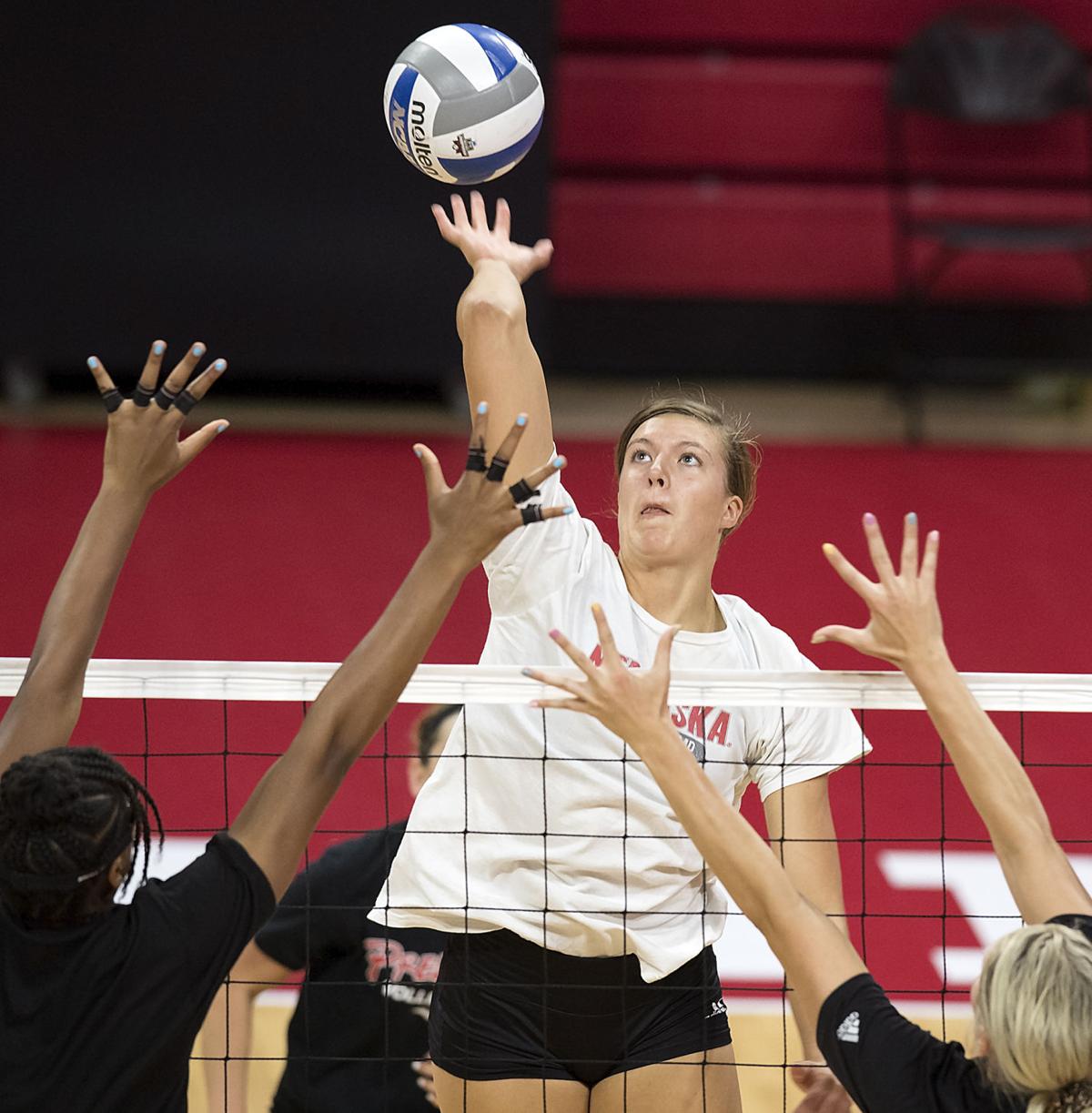 Kalynn Meyer hits during a scrimmage at a Nebraska volleyball camp in July.

It will be a few years before we know if Kalynn Meyer develops into the next great Nebraska volleyball player that played multiple sports in high school.

Husker coach John Cook has relished the chance to groom multi-sport athletes from the state into impressive volleyball players — Christina Houghtelling, Laura Pilakowski, Hayley Thramer, Alicia Ostrander and others. He’ll take that chance again with Meyer, the three-sport star from Superior, a town of about 2,000 near the Kansas-Nebraska border.

The 6-foot-3 Meyer was chosen as the Journal Star high school athlete of the year as both a sophomore and junior. In track, she ranks No. 2 all-time in the state in discus.

Meyer, a middle blocker, signed her national letter of intent last week and will join the Huskers for the 2020 season.

Most volleyball coaches have to project an athlete's potential during the recruiting process, which often takes place during a high schooler's freshman and sophomore years. That was especially true with Meyer considering she hadn’t played as much club volleyball as other players her age.

What did Cook see in Meyer to think that she could become a great college player?

“First of all, physically, she’s a big, strong girl,” Cook said. “So she can run. She can move. She’s got a pretty fast arm. And she’s very coachable, and she’s going to work really hard.

“She’s a big, physical athlete that can move. It’s hard to find athletes like that. Especially in Superior, Nebraska."

Meyer got on the NU coaching staff's radar after attending a Nebraska volleyball camp. She was encouraged to play more club volleyball, and she came back to camp the next summer.

“She came back to a camp the next year, and I think that’s when we offered her,” Cook said.

Meyer committed to the Huskers during her sophomore year. She started playing more club volleyball after committing and ended up as the No. 21 ranked recruit nationally in the class.

Meyer could still compete in track at Nebraska if she’d like to, Cook said. Spring volleyball practice is done by May and the track season goes into June.

Top-10 showdowns coming: Nebraska (22-3) remains ranked No. 6 in the AVCA coaches poll. This is a major week for Nebraska’s Big Ten title aspirations, as the Huskers play two games on the road against league teams ranked in the top 10. Nebraska travels to No. 7 Minnesota on Friday, and plays No. 5 Wisconsin on Sunday.

With four matches left in the Big Ten season, Wisconsin leads the conference at 15-1. Nebraska, Penn State and Minnesota are tied for second at 14-2.

Kubik earns Big Ten award: Nebraska outside hitter Madi Kubik was named the Big Ten freshman of the week, earning the weekly award for the second time. The West Des Moines, Iowa, native had 19 kills and tied her career high with 16 digs in a five-set win against Iowa on Saturday. She recorded 16 kills on .306 hitting in a sweep at Michigan State.

Huskers in the pros: Several former Huskers have started their professional seasons. Jordan Larson is playing for Shanghai in the Chinese Super League. Mikaela Foecke signed her first pro contract to play in Italy for Bisonte Firenze in the Italian Serie A1. Amber Rolfzen also plays in Italy. Kelsey Robinson stayed in Turkey but is playing for a new team, Fenerbahce.

Justine Wong-Orantes also got a pro deal, which isn’t always easy for U.S. players at the libero position because teams often save their import spots for the point-scoring positions. She’s playing for Schwerin in Germany. Kadie Rolfzen is playing in the same league in Germany, for Dresdner.

Nebraska volleyball player Megan Miller plans to transfer from the program, a spokesperson confirmed on Tuesday.

His salary will be more than many NCAA Division I women's head coaches made last season.

It took five sets, but Nebraska’s Lexi Sun (11) and the Huskers held off Iowa in a match that lasted nearly three hours Saturday at the Devaney Sports Center.

Kalynn Meyer hits during a scrimmage at a Nebraska volleyball camp in July.