Updates and news from the Nevada caucus

Annie Oakley’s Model 1897 Marlin recently sold at auction for $575,000. Buffalo Bill honored Oakley by having special features added to his barn at Scouts Rest Ranch when he built it. Read more about this piece of history in this week’s column.

Buffalo Bill had the ends of the rafters in his barn cut to show the shape of Oakley’s rifle used in the Wild West Show. Oakley’s trademark, a heart with a bullet hole through it is at the peak of the roof. 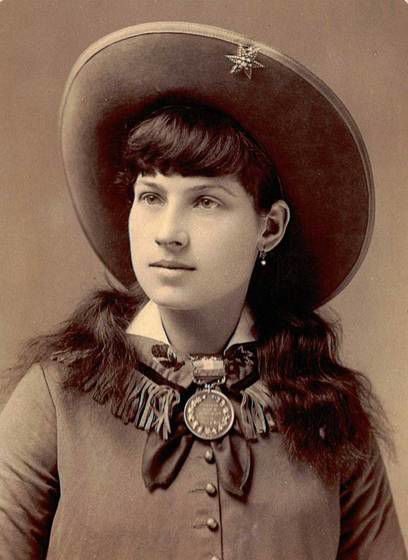 Happy New Year to you all! I hope 2020 will prove to be a healthy and profitable year for you. And thank you for being a Beatrice Daily Sun reader.

I ran across a piece of history recently that has ties to Nebraska. One of Annie Oakley’s rifles, a Marlin Model 1897, recently sold at auction for $575,000. The tie to Nebraska is that Oakley was a headlining performer in Buffalo Bill’s Wild West Show.

Buffalo Bill was so impressed with Oakley’s shooting that he honored her when he built his barn at Scouts Rest Ranch, in North Platte. The rafter ends under the eaves were shaped like Oakley’s Model 1891 Marlin and her trademark, the Ace of Hearts with a bullet hole through the middle, is at the peak of the roof. You can still see these today.

The Sioux War Chief Sitting Bull, also a member of the Wild West Show, after witnessing his first one of Oakley’s performances, was so amazed by Oakley's marksmanship that he gave her the Sioux name “Watanya Cicilla" which means,

"Little Miss Sureshot". Oakley carried that nickname for the rest of her life.

This rifle was a very special piece with it being entirely gold plated, some German silver trim, deluxe grade walnut stock and forearm, fancy fleur de lis checkering and covered with the highest grade of engraving offered by Marlin’s Master Engraver, Conrad F. Ulrich Jr. According to historical records this is one of two engraved and gold plated Model 1897s Marlin presented to Oakley.

This particular rifle was made in 1902 and presented to the famed exhibition shooter Annie Oakley by the Marlin factory. The factory presentation inscription appears on a silver shield on the left side of the buttstock and reads, "PRESENTED TO/Annie Oakley/LITTLE SURE SHOT/-BY-/MARLIN FIREARMS, CO./NEW HAVEN, CONN./3-25-03."

Oakley used Marlin rifles in her performances, and one of her favorite rifles was Marlin's Model 1891, a .22 caliber pump action rifle. This is the rifle she used most while performing with the Wild West Show.

A Master Marksman, she could hit the thin edge of a playing card and shoot distant targets with the rifle pointed reward over her shoulder while aiming by looking into a mirror. She entertained European royalty such as Queen Victoria and even shot a cigarette out of Kaiser Wilhelm II's hand…at his request.

Oakley joined Buffalo Bill’s Wild West show in 1895 and continued traveling with the show until 1901 when she was badly injured in a train accident. She suffered temporary paralysis and had to endure five spinal operations on her way to recovery. She left Buffalo Bill’s show and in 1902 began a less taxing acting career in a stage play written especially for her.

Oakley definitely made her mark in history. From the auction price of her rifle, her reputation and memory are still well known by those who appreciate firearms history.

We just finished up the muzzleloading season, but we have started the last deer hunting season for the year. Nebraska offers a late anterless season from January 1 to 15. It is a chance to put a little more venison in the freezer and helps with herd management.

The purpose of the season is to harvest does from the herd. Whitetail deer have an amazing reproductive rate and populations can increase rapidly. Remove the breeding doe from the herd is the best way to control local populations.

I have a special doe hunt set up for the season. I found a landowner who is being overrun by deer, so he was happy to have a few removed from the property. To emphasize the conservation/management aspects of a hunt like this, I invited a buddy of mine, Joe Arterburn, a writer for Field and Stream to join me. You may see this hunt in an article next year.

Annie Oakley’s Model 1897 Marlin recently sold at auction for $575,000. Buffalo Bill honored Oakley by having special features added to his barn at Scouts Rest Ranch when he built it. Read more about this piece of history in this week’s column.

Buffalo Bill had the ends of the rafters in his barn cut to show the shape of Oakley’s rifle used in the Wild West Show. Oakley’s trademark, a heart with a bullet hole through it is at the peak of the roof.