Winter is the best time to see eagles in the Cornhusker State. These great birds follow the migration routes of waterfowl as they move south. And while they will hunt and eat waterfowl, eagles, especially bald eagles, like fish.

Perhaps the best places to view eagles in Nebraska are hydroelectric power stations in western Nebraska. The Missouri River is pretty good, but the best is in the west. Central Nebraska Public Power and Irrigation District offer eagle viewing areas at Lake McConaughy and at its J-2 Hydro, near Lexington. You can find a schedule of times when the viewing areas are open to the public at:

You can also call:

Eagles congregate near the hydros because there is open water and fish. Occasionally fish get through the screens above a hydro and go through the turbines. This can stun or kill a fish and they become easy prey for eagles. Fish can also become disoriented in the turbulent waters below a hydro and stay on the surface just a little too long.

In Nebraska, we see both bald eagles and golden eagles. A mature bald eagle is easy to identify with its white head and tail. Younger birds are more brown and mottled in appearance. They are often mistaken for golden eagles.

The golden eagle is a member of the “true eagles” family. Golden eagles are more widely distributed than any other eagle on earth. They are also found in Europe, North Africa and Asia.

Not all eagles migrate. The ones that do migrate have complex travel patterns. Eagles ride columns of rising air called thermals. They will circle almost effortlessly in these thermals to a great altitude then they will glide long distances in the direction they want to migrate. This pattern occurs over and over until the eagle gets to where it wants to go.

In one of those odd facts of nature, adult bald eagles do not migrate with juveniles. Young birds migrate before their parents. Biologists do not know how the young birds know when and where to travel.

Adult bald eagles begin fall migration when the northern lakes and rivers freeze over. Depending on location, they usually migrate to the coast or large rivers near dams, where the water remains open. Wind currents play a large roll in determining their flight pattern.

Some eagles are migratory while others are not. Many eagles in Florida do not migrate, but remain year-round. Most bald eagles migrate south in the fall to areas with sufficient food, and return north in the spring to nest. In the spring, the birds migrate quickly, but during the fall they migrate rather slowly. They may remain in an area for a week or so before continuing on.

Bald eagles are found throughout most of North America, from Alaska and Canada to northern Mexico. About half of the world's 70,000 bald eagles live in Alaska. Combined with British Columbia's population of about 20,000, the northwest coast of North America is by far their greatest stronghold for bald eagles. They flourish there in part because of the salmon. Dead or dying fish are an important food source for all bald eagles.

Bald eagles were officially declared an endangered species in 1967 in all areas of the United States south of the 40th parallel, under a law that preceded the Endangered Species Act of 1973.

Until 1995, the bald eagle had been listed as endangered under the Endangered Species Act in 43 of the 48 lower states, and listed as threatened in Wisconsin, Minnesota, Michigan, Washington and Oregon. In July of 1995, the US Fish and Wildlife Service upgraded the status of bald eagles in the lower 48 states to "threatened."

On June 28, 2007 the Interior Department took the American bald eagle off the Endangered Species List. The bald eagle will still be protected by the Migratory Bird Treaty Act and the Bald and Golden Eagle Protection Act. The Bald Eagle Protection Act prohibits the take, transport, sale, barter, trade, import and export, and possession of eagles, making it illegal for anyone to collect eagles and eagle parts, nests, or eggs without a permit. Native Americans are able to possess these emblems which are traditional in their culture.

Before European settlers first sailed to America's shores, bald eagles may have numbered half a million. They existed along the Atlantic from Labrador to the tip of south Florida, and along the Pacific from Baja California to Alaska. They inhabited every large river and concentration of lakes within North America. They nested in forty-five of the lower forty-eight states. One researcher estimated an eagle nest for every mile of shore along Chesapeake Bay. They congregated on the lower Hudson, and were extremely abundant along the coast of Maine.

The Comanche's myth of eagle creation began when the young son of a chief died and was turned into the first eagle as an answer to his father's prayers. The Comanche eagle dance celebrates this legend.

Does the term Market Hunter mean anything to you?

I enjoy researching the history of hunting and particularly old firearms. One such firearm that I was recently reminded of was the punt gun. A…

Innovative insulation unveiled for Team USA ahead of Winter Olympics 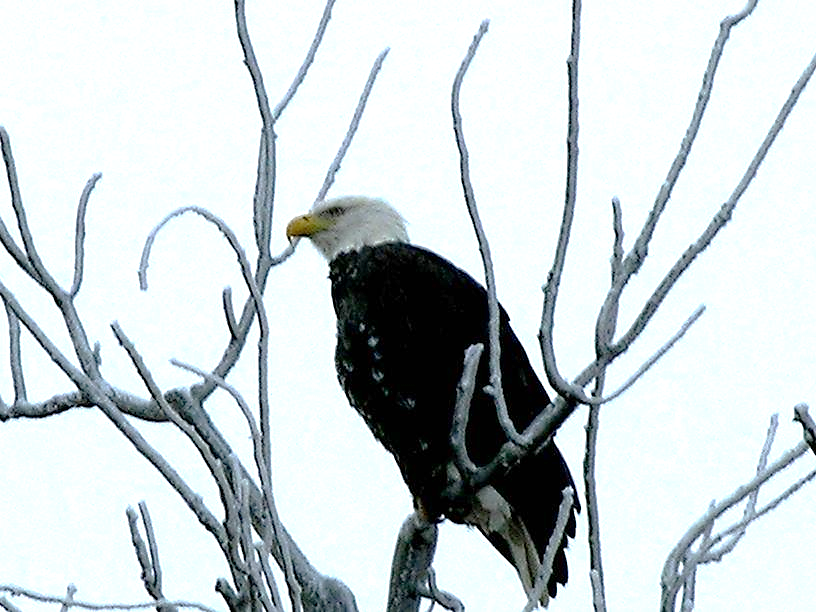 Eagles are such majestic birds. This eagle was sitting on his hunting perch below Kingsley Dam at Lake McConaughy. As more waterfowl move into the state, more eagles will follow. This is a great time of the year to see our national bird. Happy New Year!