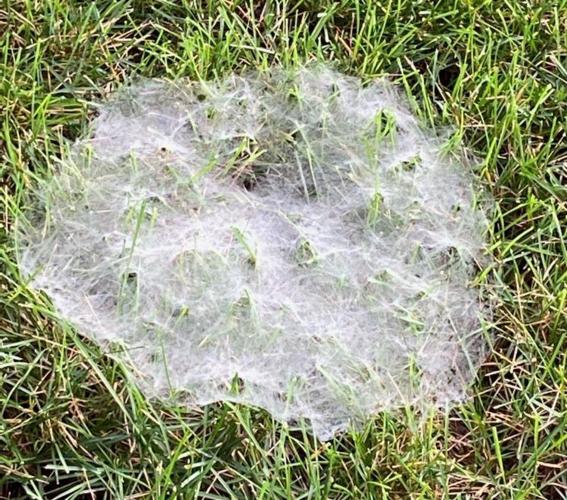 I bet you have seen webs like this in your yard after a rain or when there is fog. It is the web of the American Grass Spider, one species of the family of funnel making spiders. The spider makes the web and then finishes it off by making a funnel that it retreats into and waits for something to get tangled in its trap. 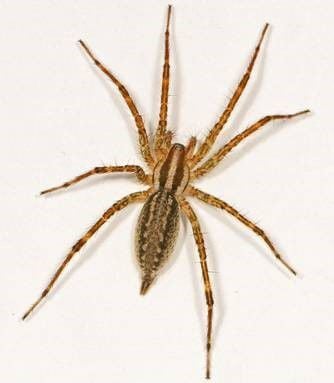 This is the American Grass Spider.

Have you ever looked across your lawn when there is some low fog and saw odd little patches of gray? Next time look closer, these are the webs of Grass Spiders that are covered with small droplets of water from the fog. I found a small thin twig and touched the edge of one web. Sure enough, a Grass Spider ran out of its hiding spot to see what had touched its web and might become its next meal.

Grass Spiders are quite common in Nebraska. They belong to the family of Funnel Web Weavers. Noted for the shape of their webs, a Grass Spider creates a funnel-like web in a grassy lawn, and hides deep in this hole. Their webs remind me of the pictures you see of black holes in the galaxy.

Grass Spiders are very quick movers and jumpers. The Grass Spider is so quick that it appears to literally fly across its web and pounce on the prey. It wraps it up and eats it when it feels like it. Unknowing insects wander into the webbing and get entangled. As they struggle they send out vibrations through the web like telegraph lines. The spider feels this and charges up to see what’s on the menu.

As is the case in many places in nature, the male Grass Spider is smaller than female. Females lay egg sacs that overwinter, hatching spiderlings in the spring. When the eggs hatch, they yield many little spiders scurry about and build individual nests spread away from one another. The size of the web will increase as the spider gets bigger.

As I said earlier in this piece, these webs are most visible after fog or a rain, when water droplets cling to the silk and reflect light. If it were not for dew and rain, most people would never realize how many Grass Spiders are actually inhabiting their yards.

Wouldn’t this have been nice to know back in March or April when kids were having to stay home from school due to Covid-19 and parents were looking for some cool science stuff to add to lessons? OK…my bad!

The National Shooting Sports Foundation (NSSF), a trade association for the firearm industry, has been watching an interesting trend in the sale of guns the last few months. Their retail survey shows that nearly five million Americans purchased a firearm for the very first time in 2020. NSSF surveyed firearm retailers which reported that 40 percent of total sales were purchasers who have never previously owned a firearm.

The FBI’s National Instant Background Check System (NICS) showed that for January through July 2020 is a record 12.1 million guns purchase requests were made. That is a 71.7 percent increase from the same period in 2019.

“This is a tectonic shift in the firearm and ammunition industry marketplace and complete transformation of today’s gun-owning community,” said Lawrence G. Keane, NSSF Senior Vice President of General Counsel. “These first-time buyers represent a group of people who, until now, were agnostic regarding firearm ownership. That’s rapidly changing, and these Americans are taking hold of their God-given right to keep and bear arms and protect themselves and their loved ones.”

Several factors are contributing to the surge in firearm purchases. Certain Mayors and Governors around the country are releasing prisoners, including violent felons. Some of these individuals were rearrested within days for committing other violent crimes.

After Memorial Day, many protests turned to looting, riots and destruction, which continues today in several major metropolitan areas. Politically-charged calls to defund police also continue to spur sales. We see Mayors on national news telling their police to stand down and let rioters do what they want. How comfortable would you be if you lived in one of those cities?

And finally, it is also a presidential election year and Democratic candidates Joe Biden and U.S. Senator Kamala Harris are calling for more stringent gun control measures, including forcible confiscation and banning entire classes of firearms from lawful possession. Any wonder why firearm and ammunition sales are at an all-time high?

The Women for Racing hosted their 35th annual Beatrice Speedway banquet and awards ceremony at Classic restaurant and event center on Saturday.

Every hunter I know, and particularly bow hunters, recognizes the name Fred Bear. I believe Bear literally resurrected bowhunting from a footn…

Ice Vs Snow…what is the difference?

This is going to be a short class on the physics of ice and snow, an issue we are be facing related to icefishing safety. We have both right n…

Ep. 74 The Showdown: Questions after the 2023 signing day

Ep. 74 The Showdown: Questions after the 2023 signing day

I bet you have seen webs like this in your yard after a rain or when there is fog. It is the web of the American Grass Spider, one species of the family of funnel making spiders. The spider makes the web and then finishes it off by making a funnel that it retreats into and waits for something to get tangled in its trap.

This is the American Grass Spider.